I have been in this Dining Room many times and every time I am impressed by its grandeur. 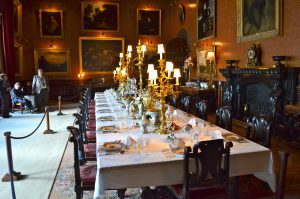 The current Queen Elizabeth dined here in 2002/3 and sat at the table shown. The massive masculine carvings determine this a decidedly manly domain with the castle columns repeated so significantly beneath a frieze of swirling carved work to the dadoed area seldom seen in wood in so expansive a distance. Such elaborate woodwork again reflects the harmonised work of designer and carver to produce something so unique in solid oak. 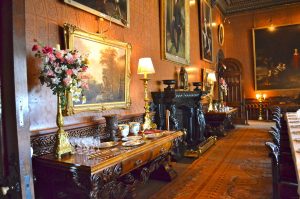 The huge walls are covered in Old Masters as you can see and they alone are worth glimpsing as they depict so much of the past as a record of affluent life in the early to mid 1800’s. The chimney fireplace is impressively carved from highly polished black Penmon Limestone. Very detailed depictions of two classical Roman figures.

The ceiling detail is truly remarkable with its large rosettes framed in squares by ornate plasterwork in the form of round mouldings and repetitive filigree. It’s no small thing to produce such creative work much of which is moulded below and then hung and plastered in place alongside in-situ sections that unite the various sections. 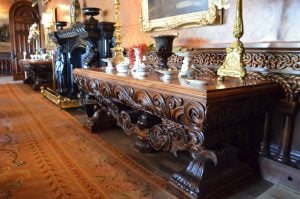 These large carvings flow in remarkable scrolled curves to create of diversely carved and shaped frieze work. This changes form but remains a continuous dado area around the whole dining room. Though it’s not so simple as the earlier work in that the convolutes and shapes add complexities not expressed in the more repetitive and orderly at the beginning. All of this work is still time consuming and tedious, whether free- or repetitive pattern. My examinations reveal the same oversight by the master carver. The carvings in the sideboards and the dado areas are again very masculine, less suggestive but symbolic to the hierarchy and structure of the era and Pennants dominion in the region of a world visionary and entrepreneur.