Induced plane chatter is a difficult task that even accomplished woodworkers cannot achieve no matter how hard they try yet novice woodworkers seem to somehow do it without even trying. Doesn’t that tell you something about this mysterious myth? If what I say is the case, that even experts have difficulty inducing plane chatter, why has it gained such attention for three decades. Here is the way I see it.

Alright, I tried with all my might to get a regular thin iron in a Stanley smoothing plane to produce true surface chatter on oak and finally succeeded after a dozen or more attempts. This took great effort because I wanted to show you visually that what most people bring to me as chatter is not and never was chatter. Plane makers knew this at the time but said nothing because they could capitalize on the misinformation put out in magazines that kept people in ignorance. Others confirmed that what they saw in the novices plane work was chatter, but that was not really the case at all. Fact was they just knew no difference. They were not intentionally deceitful but, well, unknowing.

Now we know that plane chatter is indeed an observable reality the consequence of which can be removed with very minor light sanding and here is what plane chatter looks like when magnified. 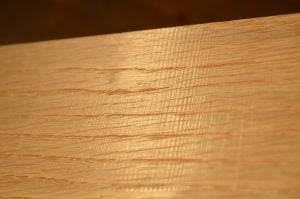 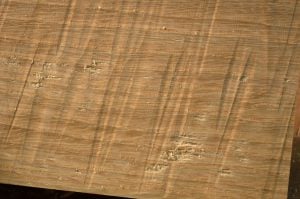 This chatter is the result of minute, iterant plane iron flex as the plane is thrust forward in plain planing fashion. But I must insist that this not what people get when they say their plane chatters. What people get is pictured in the second photograph. Many things can cause this but not chatter—diffidence, inexperience, dull cutting edges, misplaced cap irons, the wood itself; anything can cause this phenomenon that is NOT chatter. Now I do think we have reached a point where we need to name what we have, perhaps a title such as plane skipping, plane stutter, plane stammer or plane stagger. I like scudding the best for this is what it truly is. The Free Dictionary describes scudding as: To run or skim along swiftly and easily. 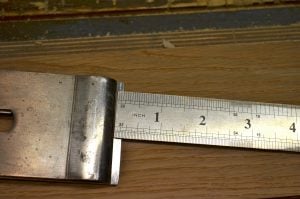 The massive 3/16″ setting still produced a pristine surface with no chatter or scudding yet the ‘experts’ (not usually real woodworkers) tell us that this is the result of thin irons, thin cap irons and lightweight planes. It’s an untruth we have put up with for too long now.

Below is a pristine oak surface produced with an iron extended 3/16″ from the cap iron. 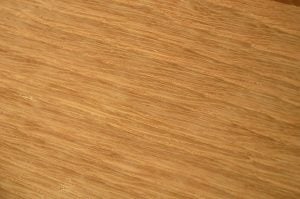 In my induction attempts and experiments today I extended the cutting iron a massive 3/16” from the leading edge of the cap iron; the plane, with its original thin iron, continued to produce a pristine surface and my students were there to witness it. I used a regular Stanley # 4 ½ smoothing plane with all standard parts to plane into adverse grain and this is what it produced, the bevel-up planes worsened the dilemma. I then planed with the grain instead of against it and the results were perfect. I find that the #4 and #4½ is equal to all smoothing plane tasks without change.