Not many men can boast seven decades of working wood for a living or even being able to work for seven decades. I am nearer than most having worked wood for five. This gentleman joined the throngs in my workshop yesterday and made the passing comment most do about bringing back “fond memories.” I stopped working on my stools to talk to him. He was a builder and worked a large amount on joinery. 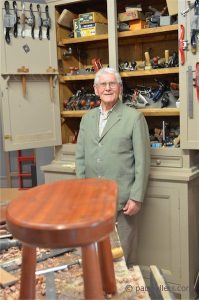 We chatted together for a while and his son came in and chatted too. A short while later another joined us and then another small boy. Here we had four generations standing together looking at and talking about my work. The gentleman, for that’s what he was, a gentle, kindly humble man, told me that he was 91 years old. I was amazed at the manner of this gentle, manly man. He had strengths and character I lament the loss of in our present age. A man who never swore or complained to be accepted by his peers, a man who liked being, well, a workman, a man who treasured honest daily work who never sought the flash-in-the-pan stimulations of today’s world of work and was never the centre stage performer. His son was telling me that his father had been helping him put in a loft conversion on his house.

2 thoughts on “Working wood over 7 decades”