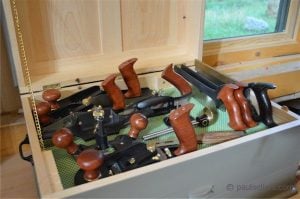 I would that someone would have come out with the regular Stanley #4 plane Bailey pattern again. You know, the lightweight one. One with nice Padauk or curly cherry handles. Or even highly polished beech would work for me with no stain. Also, I know the German tool makers Kuntz made a very junky model of some of these at one time, but they were never known for quality. I use the small Veritas low-angle, bevel-up smoothing plane quite a bit when I am working on some pieces. I like all of their bevel-up planes but this one I like because of its light weight as well of course as it’s quality. But if someone came back with the smaller #4 Bailey-pattern smoothing plane with the same quality as the higher end models produced today I would definitely buy it at the same price they are expecting for the #4 Bed Rocks. I want the thinner iron though I do think it could be slightly thicker, not much though. 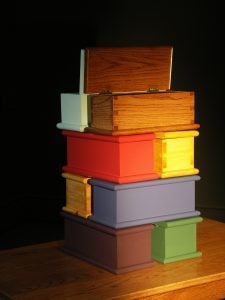 This week I will be teaching a workshop making the dovetailed Shaker candle box. aIt’s one of my favourites classes because here we demolish the myths of tools, methods of work, sharpening and so much more. Actually ,we have two foundational one classes followed by two subsequent level II and III classes. Anyway, we will be using the #4 Stanley and Record smoothing planes as well as some Veritas planes too. This is where the rubber hits the road for many of them. Bevel-up, bevel-down? They both are welcome because they both have their place. Both are limite and both complement one another. These workshops are a passage of discovery and experimentation, opening doors many are reluctant to open. This week changes lives. You watch.

In this opening workshop we look inside the plane, discover it’s inner working s and find out why it was abandoned. It wasn’t abandoned because it didn’t work and work well. It wasn’t abandoned because it was bettered by more advanced technologies, fashion played a small part, but it wasn’t even that powerful interloper into our woodworking world. This the most commonly used of all Stanley planes simply died. It’s quality diminished as the last four decades came and went. What we have today is a sorry example of what once was. However, rest assured, the quantity of planes Stanley and Record produced between the late 1800’s and the close of the last century will supply us through recycling channels for ever. There are at any given tim about three hundred of them on eBay alone. Now this begs the question. What planes do you use in Poland and Germany? Holland and Belgium. What about all of the other EC countries? What about Australia, New Zealand, Indonesia and so on?

32 thoughts on “Buying good tools cheap – What planes do you use?”