Why do you saw tenons?

We always assume that the best way to cut tenons is to saw them. I think that may be because all books show sawing tenon cheeks and not chopping or paring them. I do saw tenons and indeed teach people how to saw them, but I also encourage the bold step of chopping them because for the main part I split my tenons by using a wide chisel to separate the waste wood from the wanted. I mostly split my tenons rather than saw them. Why? Well, splitting tenons is really much more pleasant than sawing, it’s easy, fast and accurate to do and a 2” long 3” wide tenon can be split and pared to finished thickness in two minutes or less when the shoulders are cut ready to split.

I suppose the very word split conjures up negative connotations parallel to smashing glass or crashing into something. Wood splitting automatically conveys the accident of working wood; an unintended reaction to something that we hope won’t happen.

So, when do you use tenon saws?

Well, sawing tenon cheeks in non-cooperative grain such as knots, reverse and wiry grain ensures straight cuts that can be further refined as needed with a 1” bevel-edged chisel. Long-grain splits (from the end) may well be a first choice, cross-grain paring (from the side) may well be a second or first choice and sawing along the grain (from the end) to the shoulder a resort tactic tackling what cannot be split or pared. 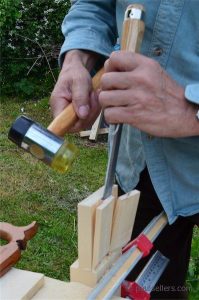 This is my strategy in general. Some woods readily split. Walnut for instance is one wood that readily splits and usually comes as straight-grained wood. Tenon cutting is a breeze. Walnut can be split and pared with equal ease. Cherry is a close second. Poplar, on the other hand, can be unpredictable and is best pared from the side. Pine readily split from the end but is often unpredictable for side grain tenon paring because of variable density in alternating aspects of the growth rings both within the same species type and across the different types of pine. This is true across the full range of coniferous trees. The wood from the whole range of coniferous trees readily saws regardless of specie types. 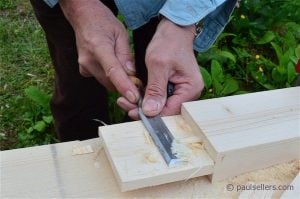 I usually saw these woods when the tenons are say narrower than 3” but on wide tenons I usually split and pare to finished size. Oak end-grain splits very readily but can be resistent for side grain paring because of its coarseness. Regardless of the wood, side grain paring begins with shallow cuts and continues in small increments as the waste is removed. It is best to work paring cuts from both sides of the tenon so that unsupported fibres don’t fracture in the wrong place or below the gauge lines.