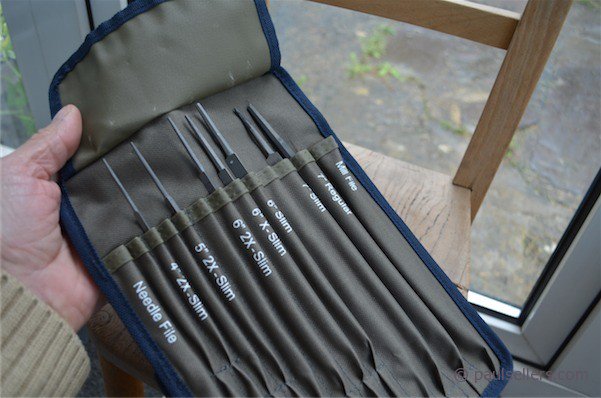 I got the new Grobet saw file pack from Veritas yesterday and couldn’t wait to get in the shop to really try them out. I wanted to put them through their paces because I have at least 20 saws to touch up before fall and winter classes begin in a couple of weeks. With the demise and failure of Nicholson to redeem themselves from now manufacturing such low grade saw files, I was glad to set up the saws and start filing, and file I did. The school’s saws I touched up were in good nick as I always stay on top of them and they only needed one stroke to each gullet in each of the 20 saws. With single-swipe sharpening, a 10”, sixteen points-per-inch saw takes me under three minutes without setting, and none needed setting so in just over an hour I was about done. 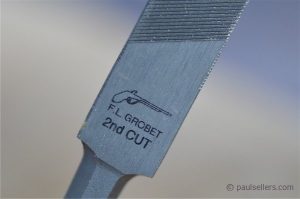 The Swiss-made file did well and I concluded it to be as good or better than the files Nicholson were once known for.

In fact 20 saw sharpenings from one file is perfectly acceptable. As a last shot at testing its limits I took on an eBay find and a favourite of mine, an R Groves. 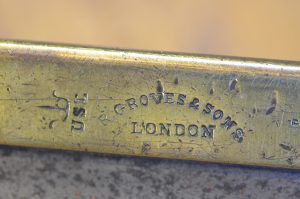 This saw is well known for its harder steel and a 14”,11-ppi rip tenon in the condition this one was in would make any file baulk at the trenches – Oops, I mean gullets. It would be unfair to state a file was useless if it only sharpened one saw but the saw was in this kind of condition. 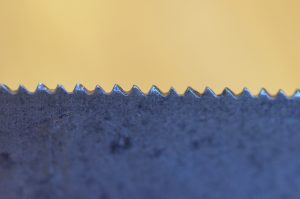 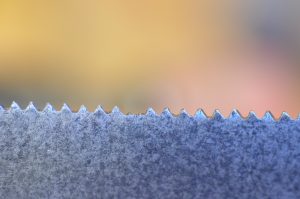 First, the teeth all need shaping badly. That is often a series of sharpenings and in this case it took three times before finally establishing the shaping I wanted and then a last light pass to get the teeth to perfect level and edge quality. That means that I also topped the teeth (jointed USA) because they were so wildly uneven. Two teeth in one spot were broken off and a third one elsewhere was missing. When teeth were wildly bad, saw shops used to recut the teeth with a tooth cutter.machine, otherwise a mechanical filer could end up with a series of half cut teeth. Hand filing as I do enables me to ‘move’ the tooth over and reestablish it and centre it in relation to the adjacent teeth. That’s what I was doing after topping the teeth. Well, the file actually reshaped and resharpened the whole Groves saw as well so, though I finally rendered the file useless, it wasn’t without it excelling in the cause of duty. This file was a smaller file, a 5″ 2X slim. The contrast between before and after took the saw from passive rake to progressive and aggressive. It sliced through wood like the best saws and I now have to make a handle for it to restore it to full glory. Someone replaced it with a sixties Spear and Jackson. It works fine but looks dead ugly compared to the ones groves made.

Thos is how the saw teeth looked after conclusion.

I am so glad to have a good saw file in my hands again. I will continue with the Bahco files here in 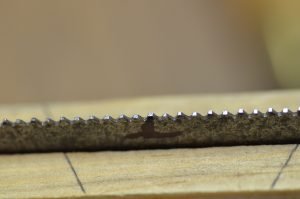 the UK and now use Grobet for the USA saw sharpening. 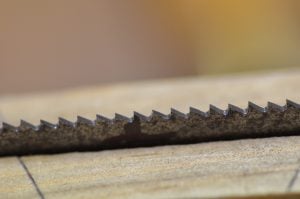 So glad this was resolved for me. Saw filing is fun when you know how and I have a completely new restoration method to show you as well as a new method of sharpeningI have not yet shown anyone yet. I want to share this with you soon and we will do that through our videos.

I love the look of newly sharpened and restored teeth. I wish we had saw makers that could make folded backs on saws as well as this one. In this case I really like the added weight. Ever noticed harmonics with the new lightweight saws. Every tooth vibrates in sympathetic harmony. Amazing how tool makers get it so wrong – heavyweights on one side and lightweights on the other. Just taking a look back should tell them something.

Love the Grobet saw file. Lets see how it does over the next year or so. That will be the real test.