Busy start with a full foundational class at the Penrhyn workshops today. Full of aspiration, this class was made to succeed even on the first day and that’s how it felt to me. One thing that differs between the US workshops and the UK is that in the US, most of the students have a fairly extensive workshop comprising a range of machines to work their wood with. In the UK, this is more rare than the norm. I believe this is a cultural difference to do with space. In the US, houses tend to be larger and so too the land on which they sit. Many houses in certain colder regions have basements and almost all houses have garages. 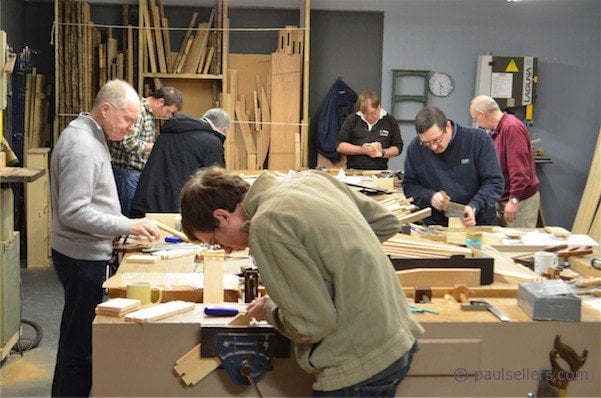 Demographics show that Americans spend a higher percent of their income on their woodworking interest than UK woodworkers too. In my view, it is easier to work wood in the US than the UK. ANother factor is the easy access there is to wood too. Cost is a key factor and tools, machines (not the same, except in the eyes on manufacturers, magazine editors and catalog companies) and wood are much, much less costly in the USA. The exception is the cost of secondhand HAND tools through eBay.co.uk. As we pulled a new set of Sorby chisels from the box I launched into sharpening chisels and edge tools. Without this first hour, the class would indeed fail. We never use a machine for any part of this process but we do introduce other possible options including stone choices, honing guide possibilities. Believe it or not, freehand sharpening, once the skill is developed, remains the fast option with the least invasion. We do consider safety, but not anywhere near the measure we would with machine methods. This set of Sorby’s fast became a favourite for me. I loved the perfect balance, which somewhat surprised me because these were the ones with the plastic handles. The weight to length ration gave me a perfect flexibility and I worked with them all day today and they seemed absolutely flawless to work with. Placing them alongside the boxwood handles, the handles were slimmer and longer. I think that it took no more than 20 minutes to flatten all five chisels dead flat and polish them out to 15,000-grit. 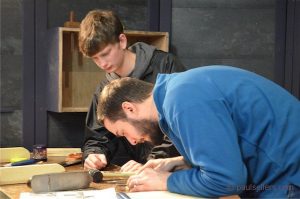 That meant that we were soon making dovetails with them and for this they were perfect. Every space was filled with people working wood and it was very soon that the dovetails started to be formed. 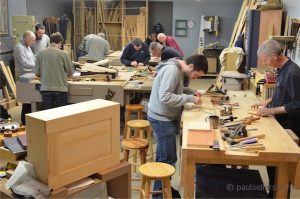 Some students were new to this and I should have recorded the questions and answers, which I have considered doing for the online broadcast. Questions on saws and chisels and angles on chisels are indeed helpful for anyone new to woodworking, but there are other good questions such as, “What’s wrong with using routers to cut dovetails?” I answer as best I feel and without creating the same imbalance in reverse that has been created by some of the entities making machines and tools. If I have one drawer to make, then it’s unlikely I would use a machine. If I ten to make, that would remain the same. If I had a thousand to make by a given date, I would consider the router. I think one thing I like is that there are younger people involved in woodworking and that is afforded by the fact that we use hand tools and not machines. Rightly so, in my view. 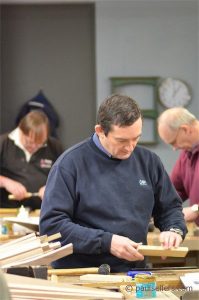 Machines are inherently dangerous and no matter how much safety equipment you have, that will always be the case. When people feel intimidated, they should listen to their heart and not feel failed by rejecting the machine as their primary way of working wood. Woodworking machines, according to Insurance companies, are the most dangerous of all machines used in industry. machines sold to amatuer woodworkers were designed for industrial production. We use them with caution and wisdom. 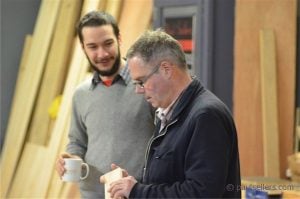 Hopefully we keep our eyes and lungs, nasal passages and throats. We are also very attached to our fingers and hands and want to hold o to them too. Finding the balance in all of this is important. All in all this was great day in the workshop again. Tomorrow we will have a box together replete with hand cut dovetails. The box completed is only a very small part of these three days. The box itself can destroy the objective which is immersion in woodworking. We are together to learn, to develop our ability to respond to the five senses and to enjoy creativity. Competition and competing with one another can destroy this too. We rest from that world for three days. We watch as we make mistakes around the room and we sympathize where necessary. Sometimes we laugh with one another at our mistakes, but we know that that’s with and not at one another.