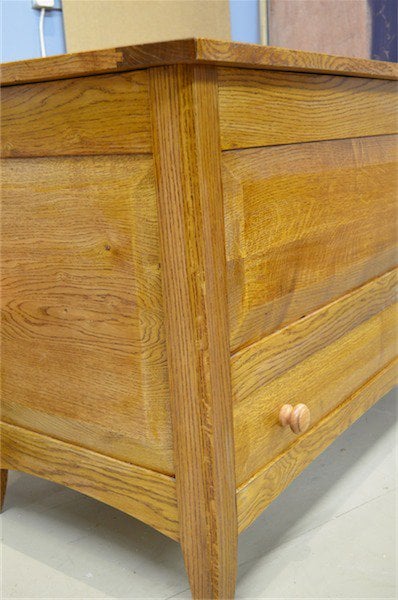 I suppose I know more about tool chests and such than most people might, mostly because all the craftsmen I worked with as a teenaged apprentice used simple joiner’s tool chests and kept them beneath the end of the workbench; the same joiner’s workbench I did the YouTube video on a few months ago here. This chest comprised a rectangular box 30” long, 20” deep and 20” high. They were of course always dovetailed and at an antique shop or car boot sale (fleamarket) in the England you might find half a dozen or more. My friend Bill specializes in such pieces as well as many pine cabinets and cupboards and people buy these obsolete antiques as blanket chests and coffee tables as they have no real practical use today. 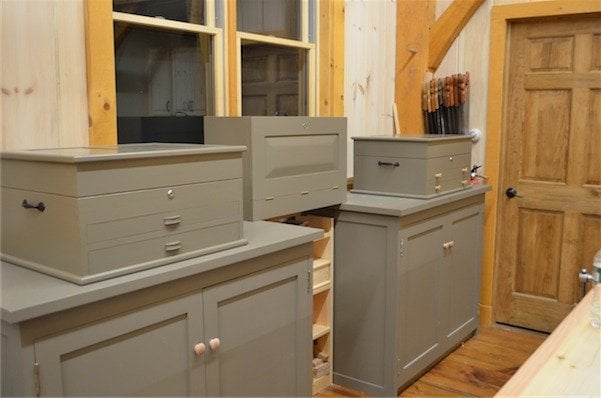 In times past these tool chests housed a range of wooden moulding planes together with square-bodied wooden trying planes, jack planes, smoothers and several other bulky wooden planes such as plough planes, filletsters and hand routers of different types. wooden planes were considerably larger than their cast-metal counterparts and required a cavernous holding area for half sets of hollows-n-rounds and side beading planes to boot. Today we no longer use these tools and so it’s a question of adapting what we need to more modern times. In the late 1800’s craftsmen used a more versatile tool box. As machines gained new territory to replace so much demand for laboursome handwork, the tool types we once relied on lessened and today we need only a fraction of the tools men once relied on.

Inside these ancient tool chests you will always find two or three sliding tills that slid from front to back and these tills once housed small hand tools such as chisels and saw files, bullnose planes, block planes and so on. The lid is either a simple single board hinged on the back edge or the same as the ones we make in our weeklong tool chest workshops as part of our month-long series of skill-build projects. They were always pine or some other softwood without exception. Craftsmen new that the weight to strength ratio was critical. I only ever saw one made from another wood and that was poplar. In Britain they were always painted black, and mostly unfinished on the inside. I own one that I bought as youngster from an antique shop. It was made by a railway carriage maker who built the fancy mahogany and oak interiors to first class railway carriages in the earlier days of steam trains. The inside of the tool chest is lined with oak and mahogany and has some very pleasing cabinet work french polished and very lovely. I use it for my tools. 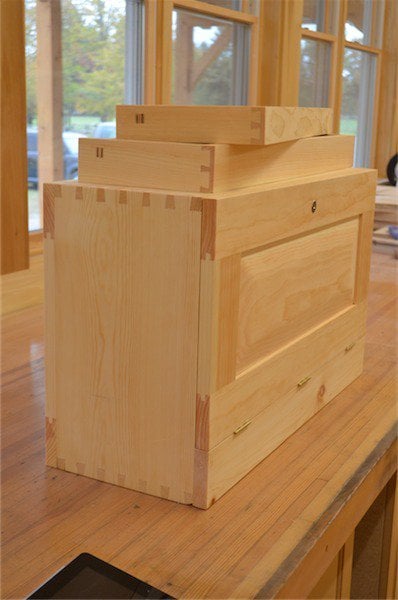 The Joiner’s tool box I am making as we travel the shows is coming along fine and I will be posting pictures this coming weekend so you can see the progress. Generally I have demonstrated plowing the panel grooves with a small Veritas plow plane and then chopping the mortises with a 1/4” Narex chisel. I have also used the Veritas hand router to trim tenons and shown traditional dovetailing methods to make the main box. Within the front and back frames there are raised panels I raised with a #4 Stanley smoothing plane. Of all of the tool boxes I have seen and used, this is probably the very best of all. It holds all of the essential planes and saws for an average workman and can be carried from place to project and job to job quite readily. I designed this tool box from front to back, top to bottom and side to side. I use it and have done so for decades now. I think I own at least ten of these chests and have them in place wherever I work. Even a small one will house a full set of the tools you need; half a dozen different planes, all of your layout tools, four or five hammer and mallet types, handsaws, tenon and dovetail saws and dozens of other important tools you need in a single location to work with.

Mortise and tenons, through dovetails, half lap dovetails and housing dadoes are featured throughout the box. These joints are my three-joint-ten-hand-tools minimalist woodworking theory I have promoted now since 1990. Can you see how critical this understanding is to the simplicity of working wood. This will be a soon-to-come online broadcast following the coffee table and the rocking chair. I am looking forward to filming this project. The coffee table and the rocking chair films are well under way so as soon as these are filmed we can hopefully get on with the Joiner’s tool chest.

13 thoughts on “Thoughts on the Joiner’s Tool Chest”