I saved one of the highlights of my US tour until it was current and available. Atlanta Georgia was a wonderful experience for many reasons and as you know I loved visiting Highland Hardware and putting faces to the names of friendly people I had come to know at the end of a phone line as it was in the earlier days. I also really enjoyed my time demoing at the Woodworking Shows to and of course this show was the culmination of a long tour, but here is another highlight I haven’t really mentioned yet.

Many of you will of course be familiar with Chris Adkins who with Dyami Plotke and Tom Lovino runs a unique association called the Modern Woodworkers Association right there from Georgia. Chris is a woodworker and wears many hats to inspire, poke and prod the best out of a wide range of people from every walk of life. We got to have breakfast together and spent a good few hours discussing the future of woodworking, the preservation of our craft, the concerns we had for its future and the future generations of woodworking. All good stuff, but more than that, the role we each play in making certain that there is a future woodworking world. Chris had some innovative ideas that I though brought great balance and sound judgement to issues I thought that he could even spearhead because of his practical upbringing and his business-building abilities. 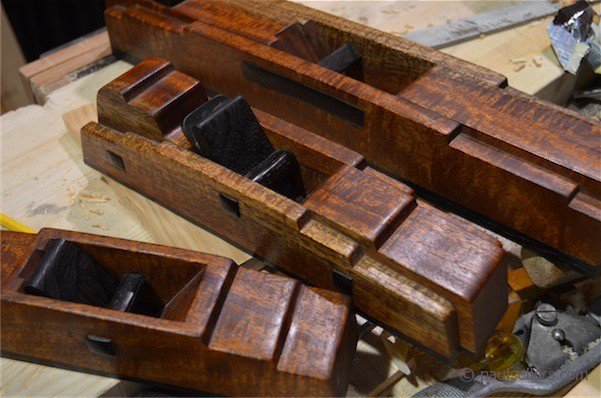 I also liked some of the small and creative things he did that go beyond the major stuff he’s involved with. I sometimes think that we need to look at the very small things we see in the lives of others to get to know their heart. One ex vice president of Intel came to my workshops and developed woodworking skills with me. When he left Intel he became the owner of a goat farm, became a woodworker and made things with his hands. It told me something of the man. Chris Adkins was modestly humble about some of his endeavors. I saw them in his promotional booth at the Woodworking Show. I had never seen Green and Green planes before. I thought they were wonderful plane adaptations with an Arts and Crafts flair. I say all of that to get to his creativity in spearheading the Modern Woodworkers Association. Here is the recording he and I did together…Actually…he more than me.

4 thoughts on “Listen to the Modern Woodworkers Association Podcast”