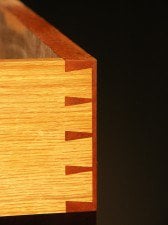 More tales on dovetails
Some years back, about 1965, Derik (correct spelling ‘cos his dad couldn’t read or write) and I went to a house to price some work. My older mentor master joiner was talking to the lady who wanted some cabinet work for the dining area and needed some silverware drawers making. As things progressed favourably, Derik came to the point of costs and so asked the lady what kind of joinery she wanted. Being a bit of a shirker, he was avoiding dovetailing the corners. Derik said, “What would you like, an ordinary common dovetail or a neat little brad well punched? The lady replied, “We always have the best. We’ll have the neat little brad well punched.” 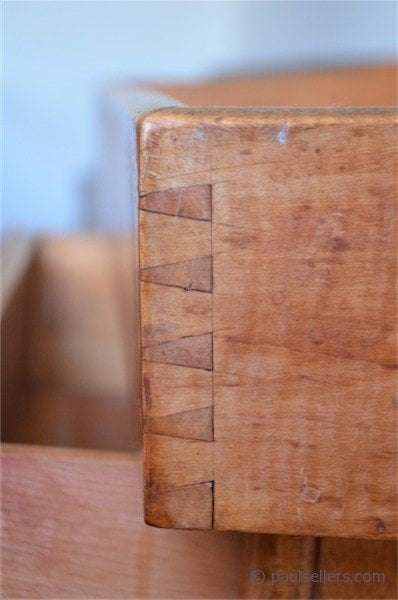 A couple of years ago I went by the Trend booth at the North of England Woodworking Show. Like US shows, British shows are mostly about the bottom line sales numbers not so much teaching and training, with demonstrators as add ons to improve the outward appearance of what is little more than a trade show . I think there are exceptions. The European Woodworking Show has many good presenters and a good balance of the creative with the commerce.

It usually takes about twenty minutes to walk around most shows, but every so often there is something interesting to see. In the shortfall I often find myself staring bemusedly at the machine world’s “expert woodworkers” setting up for a demo and before long I find myself yawning watching a router and jig cut dovetails and other different joints. It’s the extremes surrounding dovetail cutting that creates the greatest intrigue at international levels. 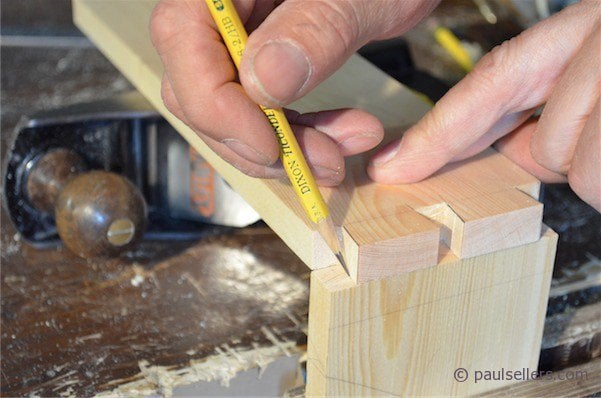 To date, I haven’t found a single person who could not make a dovetail by hand. In some cases the standard is there at the very first cut, with others, it takes a few goes because of the confusion surrounding the idea of pins and tails, which sections are angled, what are the angles and where do the squares and so on come in. There is no sector of the work world that I can single out and say these have the most difficulty. What I do notice in general is that those who were raised and work purely in a two-dimensional world with little or no hands-on have more difficulty working three dimensionally for a short period. As most education and educationalists dictate a minimalist view of art and craft, that’s not likely to change in the near future. Near future directly impacts long-term changes so it does seem that such changes must take place outside of conventional educational establishments, which makes it a very narrow margin to influence those who might be best in an art and craft world.