Of course there are always more pins than tails, that goes without saying, but does the tail wag the dog? In the overall scheme of things I might reason that in over 97% of cases, woodworkers cut the tails first and make the pins follow. So in this case, the tails predetermine that pins follow the tail in like fashion that form always follows function in the real world of non-fantasy craftwork. I am constantly reading (and being told) that there are two ways to cutting dovetails and people are always telling me there are many ways to do this or that and that there is no one right way if both ways work. 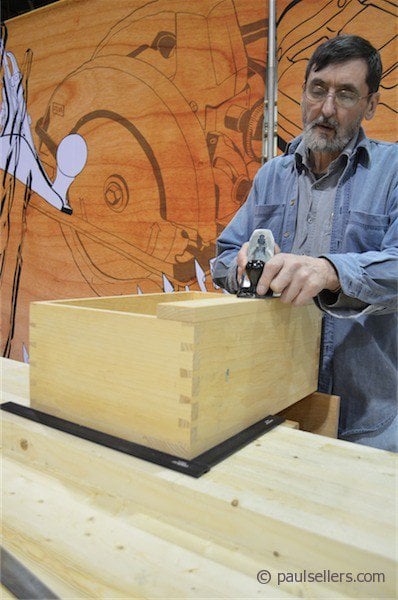 As a kid I learned to ride a bike backwards sitting on the handle bars and steering with my body between my hands on the handle bars. Both ways worked. When someone cuts one dovetail joint dovetails first and then their second dovetail pins first, they might asses the two methods to be equal. My view is that a person might want to cut a hundred or so using each method so as to become proficient and then ask themselves which is their go-to method. Therein might rest the truth and even an absolute. In my experience most woodworkers who never mastered the art made maybe one or two dovetails and failed. The joint was loose and they gave up because of their own unrealistic expectations of that ever evasive illusion we call perfection. Hating any kind of failure, they instead substituted their developing the skills needed and resorted instead to using a router, dovetail bit and dovetail jig. They donned their gladiator kit, bought into the extractor system and became firm believers that the router system was the superior way and therefor the only way to go. One drawer later and after many hours of setup, they put it away and never used it again.
These are the projects we made through the woodworkingmasterclasses.com series two months ago. Some students in last week’s nine-day Foundational Course workshop (just completed Sunday) found themselves surprisingly ahead of those who had not yet discovered this teaching resource. 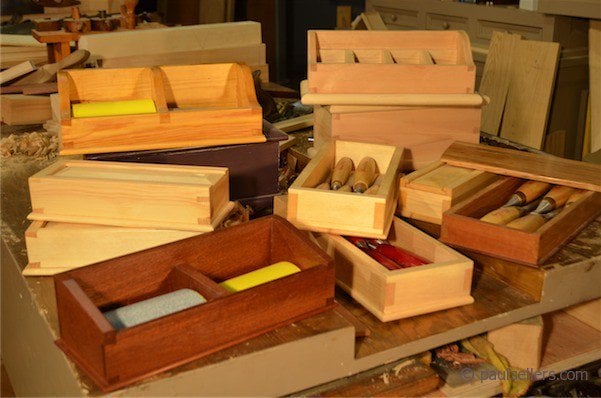 I make several dovetail joints in a week as a matter of course either for making or teaching. Mostly both. Probably about 20 at least. I have done that most of my life, but let’s say I only did it for half of my working life as a woodworker full time. I always work a six-day week without exception, so that translates into 1000 dovetail joints a year if I take two weeks off. On a most conservative level then, I have made 25,000 dovetail joints over the past 25 years. It’s actually more likely I have doubled that and I can say that the only time I have favoured pins first is in repair or restoration of previously completed work where pins already existed. I think that if someone wants to cut pins first and prefers that method then they should stay with it and enjoy it. Teaching both methods has value too.
Have I ever used a router for cutting dovetail joints?
Never. Two people have told me that to be a teacher true to my cause I should have at least tried it once. One was a magazine editor and the other a woodworking teacher who taught machine only methods. It doesn’t take me too long to determine what takes skill and brings peace and what is quite dull and uninteresting. It’s kinda nice to be able to say after 52 years since I picked up tools that I never cut a dovetail by machine. A close friend of mine, a highly skilled professional hand tool specialist, still laments the day he made a dresser with 8 drawers in it using a router and dovetail jig for the first and only time. He was instructed to get the price down by his bosses and he was slow but good.
I think ofttimes it is true that we stick to the first method we were taught and indeed if you sat under one woodworkers instruction you might adopt his method even though it might be the least popular of the methods available. Of course we all know that that’s not necessarily the best or right method, but hopefully we will be open to considering other methods, try them, and make a decision responsibly. I did look at a router one time to see if that was where I wanted to go. I am as much an expert in machine woodworking as I am in hand tools, so that wasn’t an issue, and I indeed use a router for some tasks, about once a year I suppose, but routing when it’s unnecessary or it substitutes for developing skill is not an option for me. There I draw the line. Now, having said that, it is not too late for anyone to master the skills and in reality this is indeed so much easier than you might think. Today I sharpened 18 dovetail saws in 42 minutes ready for the next dovetail class in three weeks time here in the USA. From this time on I have just decided that students can bring their own tenon saw and file and sharpen their own personal saws. I will teach them this, I will teach them to cut dovetails and they will have the skills for the remainder of their lives. How about that!

3 thoughts on “More Pins than Tails”