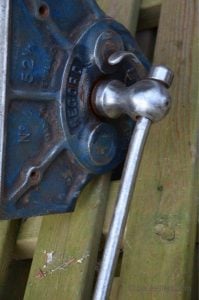 Presently, on my personal benches, I have three Woden vises on the two benches at my home workshop and at the Penrhyn Castle workshop, have two personal benches there, I have two Record vises and a Woden vise.
I have not found an import vise in the UK that compares to the Record vise. In the US they still have the Jorgensen 41012 Woodworkers Vise that has been around for decades and is fairly priced at around $150. Because Record sold off its tooling and production here in the UK ceased, Irwin Record vises are no longer produced in the UK but on another continent. The quality of castings does not match those of the original Record Marples and so longevity will likely match that of Asian imports which as yet has never compared to domestic British or US standards. 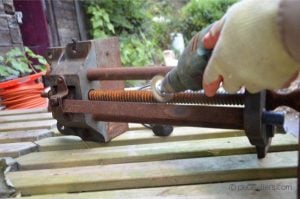 I found three more Record vises I have collected under my repair shop bench this week as I was reorganising and clearing out my excess waste. These were well rusted when I bought them so cleaned off the rust with plastic and wire abrasive discs and pads, fettled the moving quick release components whilst I had access to them and greased and oiled all other moving parts ready to install as new benches come together. 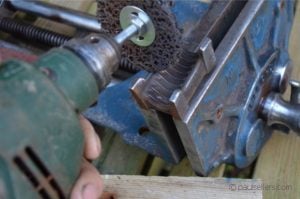 It’s always a good idea to strip down the components and remove any rust as the rust tends to slow down the movement of the quick release or cause the engagement to slip just as you are about to cinch up the vise jaws on the workpiece. It’s a simple matter to remove the cast block, abrade off the rust and reinstall. 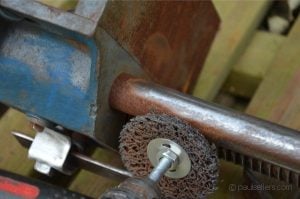 I prefer the bulk of this work to be done with a coarse plastic abrasive disk, the ones used in metal working industries for the same purpose, as this literally removes the rust without causing damage to the metal or too much reduction. 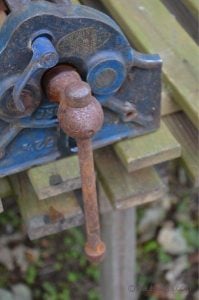 I find this especially so on the parallel bars either side of the screw thread. On the screw thread itself I used a 2″ diameter wire wheel. This went deep into the internal corners of the threads and removed any and all rust. Once completed I waxed the newly exposed areas around the jaws, greased the threads inside the threaded block that receives the screw stem and greased the screw rod. The vises are now ready to install.