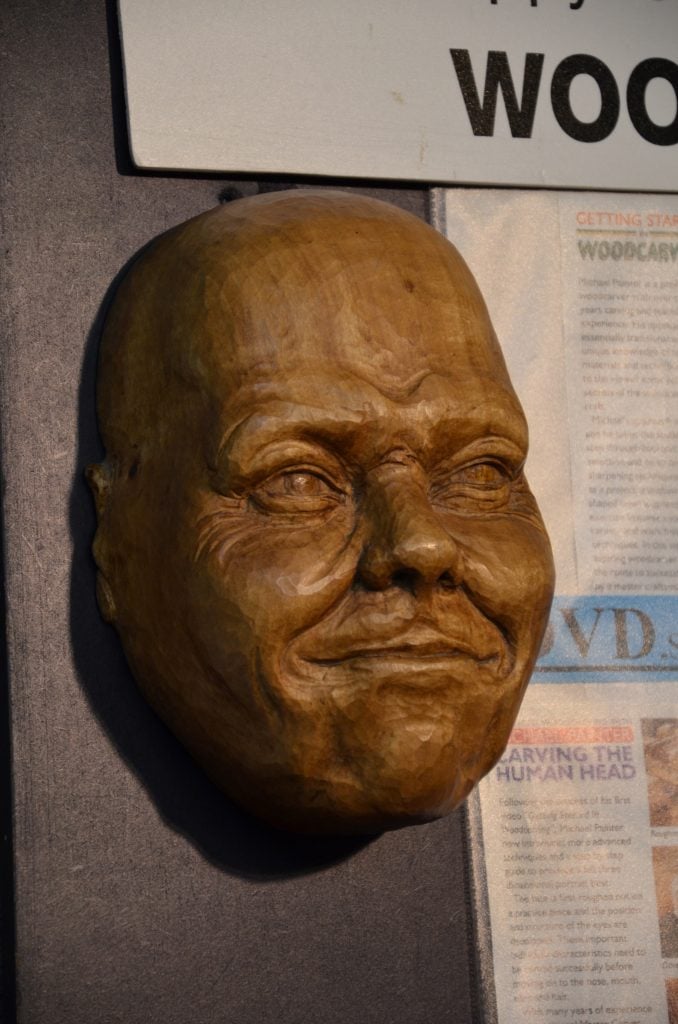 Michael Painter carves anything that draws his attention and carves in great detail the things that others might consider impossible to create with such fine detail. As people walked the aisle at the show, his presence their might have mattered very little had his work not attested to the fineness of his skill and dexterous hand with a gouge. Few artisans cross over this threshold of creativity and there’s good reason. Carving makes demands on a person. These demands create absolutes of perception that can and often do defy mapping out and logic to work within dimensions few people feel comfortable with.

I’ve seen Michael at the show for several years and we’ve chatted about his ecclesiastical carvings and also those we might call whimsical. His creative sphere in which he spends great time is the sphere of risk in workmanship that brings life to carved wood and a depth in recreated form and it’s this that separates the man as an artist from woodworking. 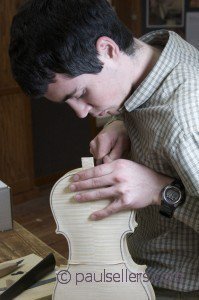 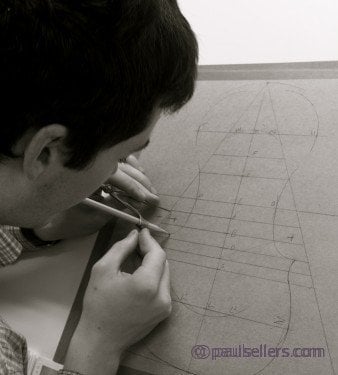 When I made a cello with Joseph for Joseph my son, I remember crossing a line I had never crossed before. Joseph and I crossed the line at different points but I think that because he was younger, 16 years old, he was more aware of the transition of awareness than I was earlier.
I think most of us know that we can mechanically carve anything and when the work is done what we have carved looks, well, mechanically done. Carving out the cello can be like that too. Many people can mechanically make a cello or a violin, but few can give those instruments the vibrant tones needed to make it stand out in its colour, depth and vibrancy. There comes a point for every new maker when he and she realises they are not carving a mere shape in three-dimensional form but creating a very unique and distinctive voice. At least that’s the hope that lies in every violin maker. It’s one thing to replicate the same appearance, another to create voice when you can’t see it to copy it. 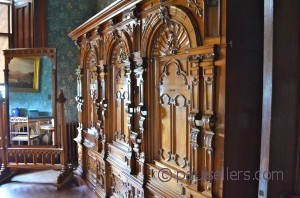 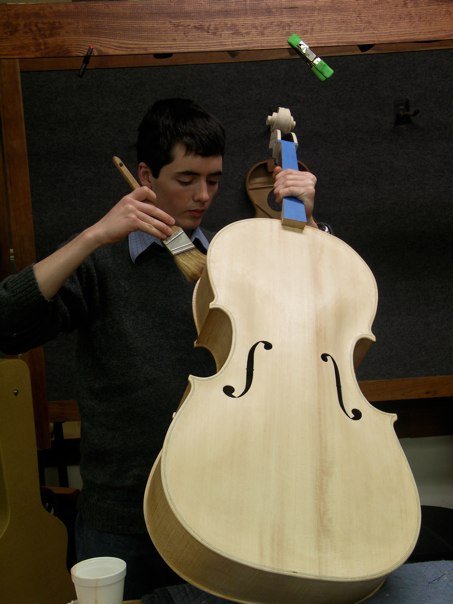 When Joseph’s cello was finished he fell deeply in love with it. I don’t think it was its appearance that drew him to love it so but the sound it made and it’s playability. At one time he had his cello and a violin he had made ready at the same time and we were sitting in a friends house when four musicians who played then for the Dallas Symphony laid down their instruments, one a Stradivarius violin and the other a Guanari cello, and started to play Joseph’s instruments. I remember the lump in my throat and the hairs on my head rising as we listened to them play for twenty minutes. 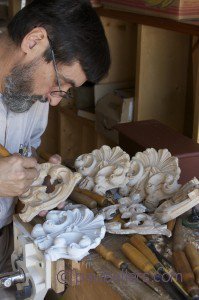 This was a dimension I had never entered before. It wasn’t mere spectating for we had carved the instruments they were playing from lumps of maple and spruce. We recorded the notes and the video, yes, but how I recall the symbiosis of music in my inmost being.
When I was a young man, an apprentice, I built a canoe. I thought it was one of the most beautiful things I had ever made. The bent and twisted form built over many weeks finally came together with ribs and runners 12 feet long and all the pieces twisted so that when I looked along the length from one end all the rails converged to give shapes I had never considered before. 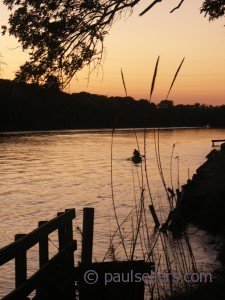 Eventually the time came to launch the canoe and I sat inside it on the banks of the canal near my home. January was cold but the ice was thin and broke easily as I paddled. Seeing the reeds and geese and ducks from this perspective, I entered another dimension of woodworking I had never seen before. It wasn’t a boat, I know that, but I was 18 years old and still had a childlike appreciation that still knew no cynicism nor sarcasm.
All of these things I carved and shaped with my hands unite with many thousands of other pieces I have made these past fifty years. They began with building my first boat when I was 13 when my mother encouraged me to carve it. That boat was 18″ long. I struggled. My tools were dull. They were my dads. I complained and my mother who was a fine seamstress all her life said, “It’s a poor man that blames his tools.” I knew then for the first time exactly what that saying meant. I sharpened my chisels on the concrete floor of the porch and got on with the carving. I realise now that those who watched over me and were training me were carving something from a lump of raw material. They were giving me shape and form and sensitivity and care. They were giving me voice and depth, creating in me the heart of craftsmanship using words like quality and workmanship. Their words ring in me today as I finish another of my projects. Little did I know then that one day, in my mid sixties, I would be a craftsman who carves and shapes life into the beauty of wood.

← Funny Christmassy Feeling – Like Am I Behind?Another Day in Penrhyn Castle →