I saw this Tyzak saw from the 60’s on eBay two weeks ago and bid. I bought at £10.30 and this would be a about one tenth of the price of an equivalent modern-day saw. Generally, the only difference between a secondhand saw and a new one is going to be sharpness. I have yet to buy a secondhand saw that’s sharp to my liking or standard. In this particular case the plate looked clear and rust free but not shiny-new. I knew the saw and for £15 with shipping I also knew it would be a good saw for someone I could pass it on to. 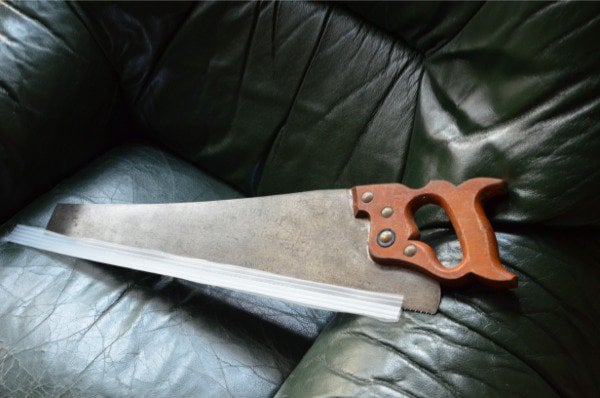 Although I have bought all of my boys tools for woodworking and other crafts, I have been saving tools for them and putting together a better more comprehensive kit for them so that they basically have the best when I am old or gone. This Tyzak is one of those rarer finds that has aged but not through use. It’s a 10-point saw with a stained beech handle and the lacquered plate is still in full coat, so, hence, no rust! I raise this particular point because good saws can still be had at modest prices and so the thing that holds most people back from buying a saw like this is the uncertainty that they can sharpen their price-breaking saw. 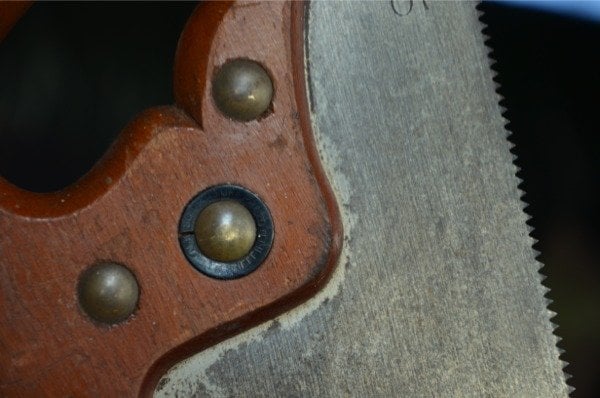 I understand this well. Most if not all of my students over the past 25 years and indeed no apprentice has ever come to me knowing how to sharpen a saw and for the main part they have never tried.
My method for sharpening is dead simple and very traditional. Most of the men I worked with kept two rip saws for long-grain ripping, one large toothed 6-point and one 8-10-point. The large saw was sharpened for ripping and ripping aggressively. No one could crosscut with this saw no matter the muscle mass at the shoulders and arms. The other saw was sharpened as I would sharpen almost all of my saws. This method is the simplest and most practical of all and can be applied to every saw up to 8-point saws. So, that means saws with teeth per inch numbered between 8-20 points per inch can be sharpened exactly the same way. Amazingly, with saws sharpened this way, you rip- and cross-cut with almost equal alacrity and it’s this factor that made the panel saw such a handy and practical saw. The method is not new and cannot be claimed by anyone in our present age and it’s called the progressive pattern. Two types of progressive patterns exist; one is where the pitch on the tooth’s front rake changes from passive at the start end of the saw to more aggressive and the other is where the tooth size changes from small to larger, again starting passive at the start end of the saw.
There is a place for the fleam-tooth pattern for teeth and I keep a 10-point saw with fleam teeth for crosscutting large sections of wood and also for working with man-made or engineered wood. Keeping a saw with this pattern of teeth saves me from buying into the disposable hard-point saws, which still wear out albeit 3-4 times more slowly. I like to use a new hard-point saw. They are well engineered and inexpensive, at first thought at least. A fleam tooth saw cuts across the grain more smoothly and leaves a smoother surface.
If this is the path for you, I will describe what I would look for when buying these three saws shortly. After that I will teach you how to sharpen them and finesse them for use. We must conquer the intimidation of sharpening saws and preserve the art in human life for generations to follow.

6 thoughts on “Just Another Saw – What Are You to Look For?”