Has woodworking become more a fantasy world? That’s what I fight against, but can we still win?

I almost didn’t write this post, or should I say post it, because it seemed so negative, but in reality the show didn’t meet my expectations so what follows may seem a little more negative than normal. I do feel it’s better to blog than not.

I went to Woodfest yesterday and worked through each of the booths I found interesting and some I didn’t. I was more than open to finding hidden gems somewhere in the show as I had in times past. This time I met with only disappointment. Perhaps others attending might have felt like me and perhaps that’s why there seemed to be so few people there interfacing, interacting and engaging. I tried to examine myself and especially my personal expectations. Perhaps it was the first day and perhaps it was the misty moisty weather, but it wasn’t raining at all. Anyway, I don’t think any of that was indeed the case. I did have a thought about craft shows and again this is more my thoughts really. Let me try something anecdotal first. A man picked up a square sided piece of steel 5″ long with a bulbous area in the centre from some crates filled with many tools the bulk of which were most likely junkers. To some of course it was all junk, to others there were treasures to be had. He twisted the piece of steel between his fingertips and rolled it to look at it more intently. The woman I assumed to be his wife said, “What is it?” He answered, “It’s a double-ended nail.” “How does that work? she said. “You stick one point in one piece of wood and the other point in another piece of wood and hit one piece of wood with a hammer.” “Oh, I see.”, she said. He tossed the steel into one of the bins and left. I picked it up and showed it to Phil standing near by. I said, “Look at that. Best find today!” “What is it?”, he asked. It’s a very nicely hand-made square awl.” Oh, wow!” Phil responded. Now that’s the difference between mere opinion and actual hard fact.

The difference between relational knowledge and abstract. To the man who twisted the piece of steel and offered his explanation it was a two pointed nail. That was an explanation based only on mere opinion. Instead of admitting he didn’t know he came up with a use that was nothing more than pure fantasy.

As I walked around the showground I became aware that most of what was there had very little practical application to much about life. I asked myself could this be what people are looking for or is it that much of life has lost the kind of meaning people knew as practical answering to the needs of life. Here at the Woodfest most of what was here, not all of it, was little more than mere amusing with amusing things to entertain people. Was that really what people were looking for or could they have been looking for things they might actually DO. It seemed a bit like walking down the modern-day high street in most towns and cities in the western world and trying to find something useful. The scene of what is now called green woodworking seems mostly about making something called gypsy flowers, dozens upon dozens of knife-carved wooden spoons and spatulas that seem to take a very long time to make and whimsical things I know nothing about but that look strange and out of place in any kind of real world. 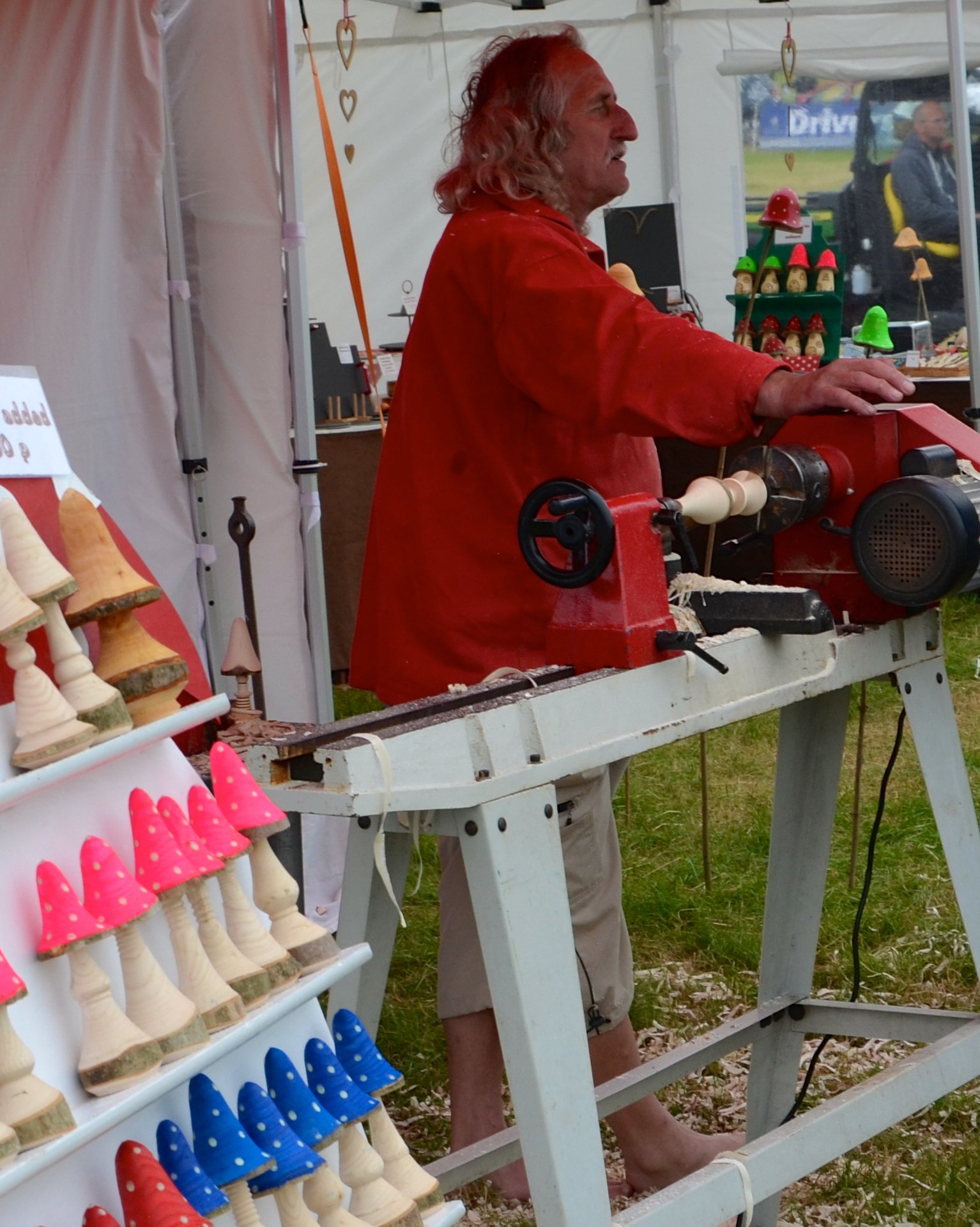 I didn’t spend too long here with the pole lathe turner but at least it was real. He chose something of a hard path turning bowls this way and he may have some hard times ahead of him but he was real and so was his product. He worked hard educating his audience which I think is critical to survival and future long term. His mate was making an axe shaft on a shaving horse and saw a nice drawknife I just bought for John. He jumped from the shaving horse and hotfooted it to Tony Murlands booth where I told him Tony still had a dozen drawknives still for sale. I bought John a beaut of a Robert Sorby curved blade. Funny thing though, I found no evidence of any other types of lathe for turning there except people selling turned work the like of which left every piece looking the same as the other. 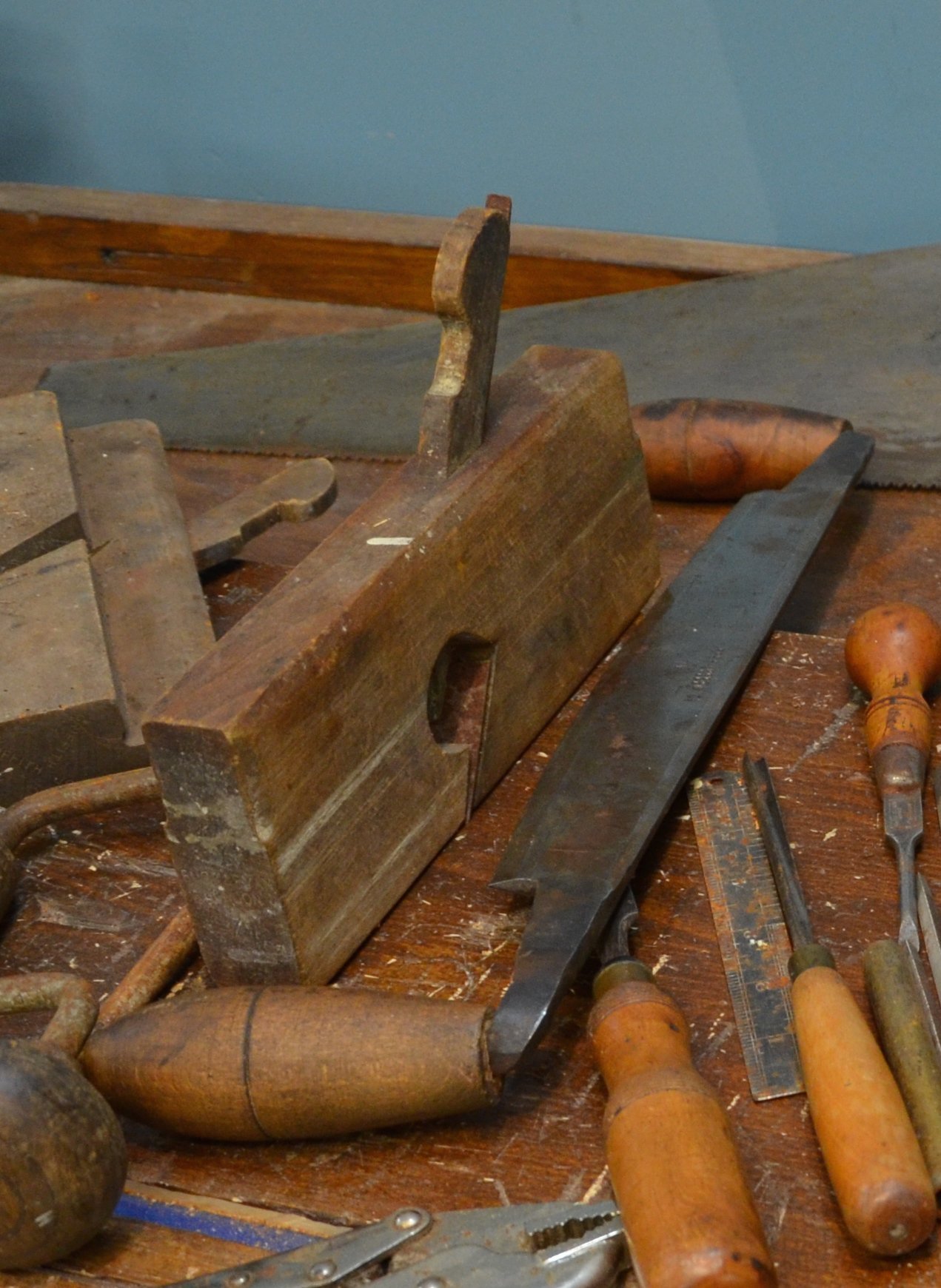 It was sad not to find but a couple of chair makers and no furniture makers. Some garden furniture made from 2x4s and some jigged screw fastenings holding everything together was about the height of the offering. I did find my usual oasis of secondhand tools in crates and Phil and I found enough for us to realise the real world. I picked up some nice bits and bobs including a pair of brass trammels, a nice brass holder that fit my Stanley knife blade and another miniature brace. there was a lot more.

Going through the Woodfest show I watched a man talk about turning and in the past three years I have only ever seen him turn toadstools (see above). In the carving with chainsaws I again saw lots of fantasy shapes formed with the tip of a chainsaw. Birds of prey, strange looking mystical shapes and so on. I wonder what visitors now think woodworking is all about. Do they now think woodworking is about men dressed in strange garb shaping goblins and wizards and gargoyles with gas-powered chainsaws. It was a relief to see a single chair lost in the backdrop until I realised I saw the exact same chair in the same place two years ago.

Could this be my last Woodfest? If the predominance will be fantasy and the same old same old I think that it could. In previous years I have enjoyed sitting and chatting with basket weavers and horse loggers, real woodsmen and conservators maintaining woodlands. I enjoy watching specialists in all the different fields surrounding my craft. Woodworking is so living and vibrant in all of its diversity and my expectations were sadly disappointed. I asked myself today if this type of event reflects the future course of woodworking and I told myself, NO. There has to be more than this.
There is so much more to working wood than fantasy figures, wooden spoons and woodland flowers and mushrooms. How we turn this tide I will never know!!!

I think that there is a place for many diverse things in woodworking as long as the predominance offers real life not fantasy. I also think that people come to events looking for real stuff but people offer more and more fantasy from a fantasy-driven world. If people are looking purely for entertainment, what’s currently offered will not satisfy them long term. I hope there are those looking for deeper things like real woodworking and craftsmanship.

32 thoughts on “Is Woodworking More Fanciful Than Real?”