I think it might be true that many people suffer a period or periods of depression in a given lifetime. Wellbeing is hard to quantify and with so many working people gainfully employed in meaningless or should I say more mindless work it’s not going to get any better going forward. Politicians of course speak from their vast experience in politics where underlings feed more and more statistics to them so that they can reconstruct their manipulations from the previous debris they caused in education and the governed welfare of the populous. Meanwhile in quiet backwaters around the world more and more people say quietly to themselves, “Whoa, I don’t think that this is me!” Today I worked all the more to get my book together and while I did this Kat and Joseph continued their coffee table and Phil worked on repairing some stools he bought from the car boot sale. 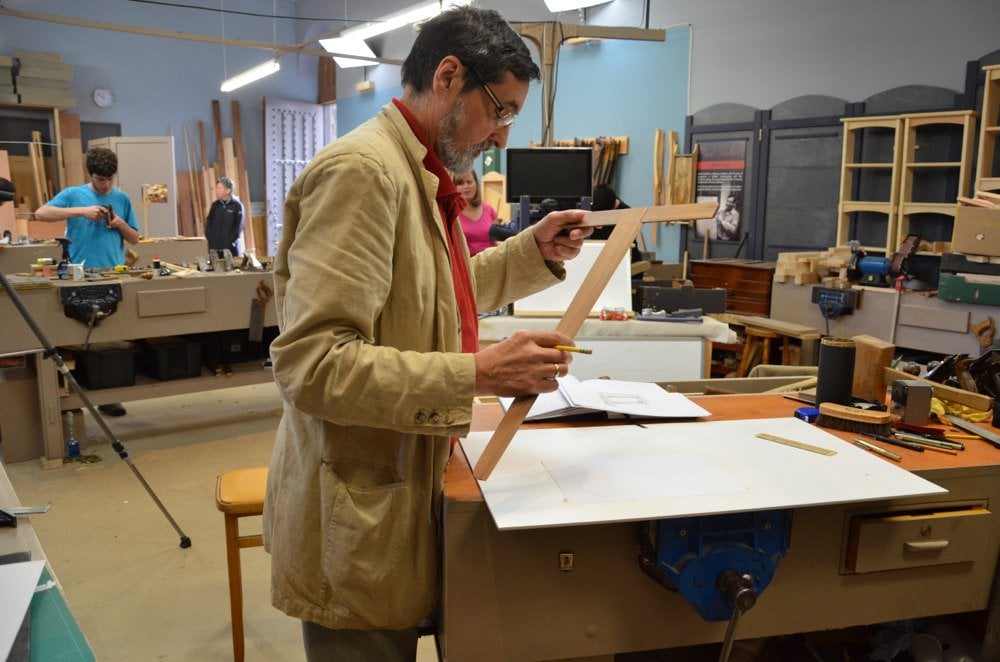 John took care of everyone as usual and in between sharpening tools and serving me with coffee he worked on his stuff too. It’s busy at the castle with visitors from around the world. They drift in and out but not without realising something’s wrong. They have never quite seen anything like what they see in the workshop. They see hands working and people talking as they work. Could it be that the real world outside that they just stepped out of is not the real world but one of fantasy? Could it be that they just stepped into the real world for just a brief moment? 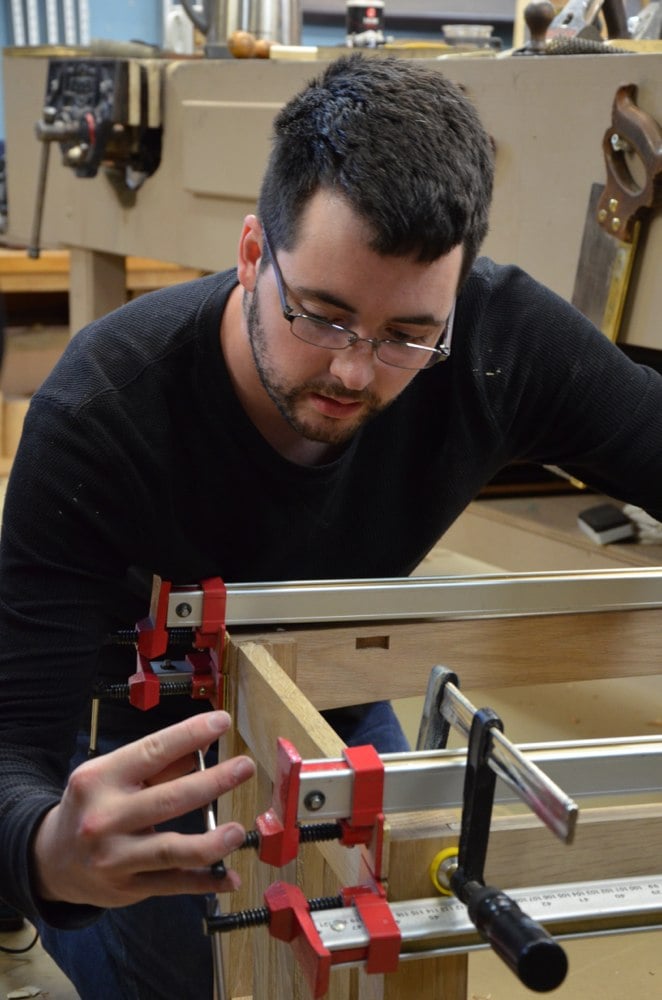 Everything surrounding structures like the castle is more linked to the archaic past. Most are like museums and no matter which way you dress it up they all look very much the same with the same speak and the same displays. Generally they are mostly presented as the past in a way that offsets the disparity between the rich owners of the properties and the poor that made them tick. Not much you can say about the upstairs-downstairs difference, but I must say that when they come into the workshop and see everyone working there, an almost magical sensing happens where the best of the past unites with the present and some gives bright hope for a future that defies the colleges and universities, health and welfare entities, politics and education and so on. Yes, it’s here that we did switch off the conveyor belt for them. They stop thinking about their thumbs on their cell phones, their software engineering jobs and the mindlessness of work. They even leave their cell phone cameras in their pockets for fear of somehow invading what they discovered because somehow they just know inside that what they see is very real. Unbelievably there is a ‘wow!’ thing factorising reality they simply cannot explain or understand and though we tell them who we are and what we believe, they start to assimilate everything for themselves knowing that what they see could be very relevant in the future again. In other words they store it away and treasure it as if it were valuable. For me the word relevant should be reviewed and placed on the page as ‘real event’. Their ears are pricked up like a spaniel when the gun goes off. The eyes spark, the face points and the nose engages and suddenly they imbibe something that drugs and alcohol, and conversation and explanation cannot bring to them. Suddenly something seems to make so much sense and even though they don’t believe this could ever be possible for them, they still feel a hope for the future. So, I ask myself just what is it that people feel they want to connect to? What is it that halts them in their visit that causes them not to smile or laugh, ask questions or whatever, but suspends them in a long and wide gaze. The planes keep stroking the wood and the saws sever the waste from the wanted. Those working look up momentarily but keep to the work. There are no computers guiding routers. If there were they wouldn’t even walk in. I smile at their internal smiles and the sparkle in their eyes that defy the indifference and the bemusing. I love to think that they would embrace what we have if they just had the opportunity, but then I think about the thing called economy and then I think about the polity and then I think about the educational providers and I see why it all stopped. 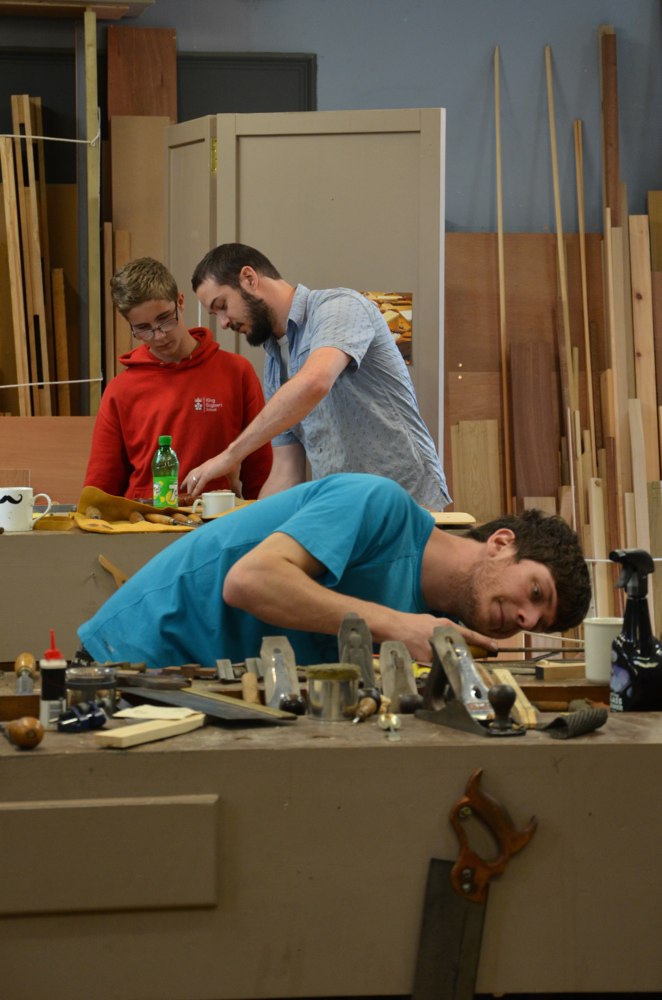 I personally think that woodworking almost stopped when it got so caught up in the same a consumerism and then, thankfully, things seemed to change and people asked “Why?” eBay came along too and thankfully we could find the tools that were hidden in dark cellars all over the western world. People asked questions and answers started to emerge when we looked into those old mothballed museum entities and saw that these old tools made some of the finest woodworking ever created and that that was before the age of industrialism and mass manufacturing, globalisation and the depletion of craftsmanship – it was even before the age of the machine and the router! The wake up call went out and people responded one by one. They were bored with the machine only world of working wood and other crafts and aspects of life too. They started growing food and baking, raising chickens and eating organic again, but this time it became know as self sufficient and then sustainable culture and so that’s what happens when someone walks into a workshop and sees ten people working with their own hands with tools that are about 100 years old and that don’t cost much but really, really work.
I say all of this to say that that’s why we do what we do and it’s working!