Today was another day in the lives of different woodworkers around the workshop. Every day is always special and unique because much of it is somewhat unpredictable. 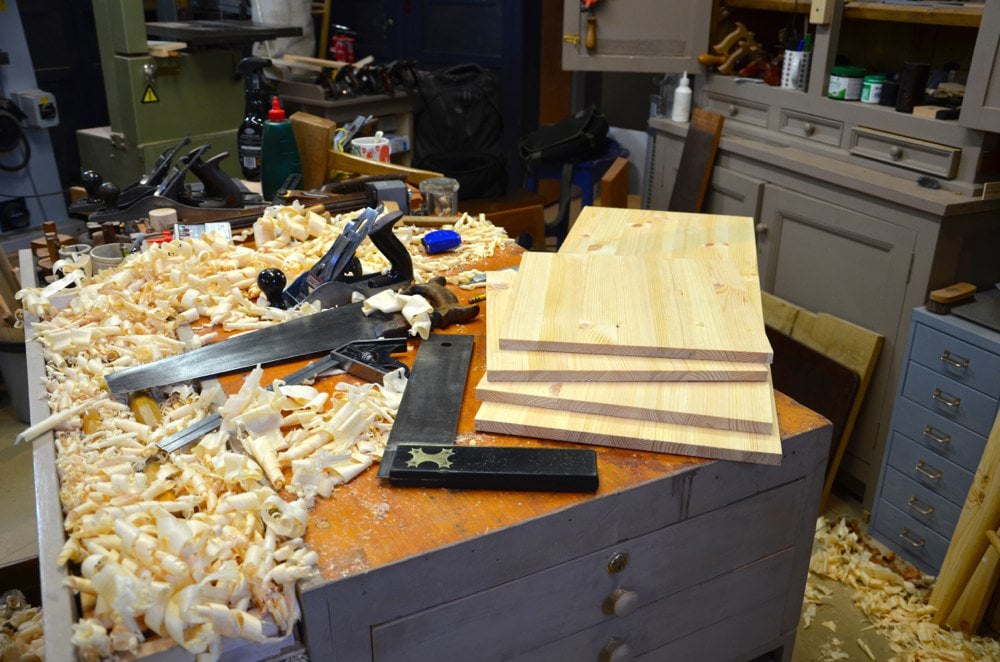 My toolbox build is complete started with these boards on the 21st September. They were too thick and I planed them to a third less with a scrub #4 Stanley you might recall. The pictures below show where I ended up this evening. There is nothing more I need to do to it and the sense of fulfilment in closing cannot be measured by anyone but me. The last coats of wax made the smoothness match my experience in the making of it and though its ordinary and unpretentious as far as functionality goes, it does stand as a match of how it might have looked say after seventy or eighty years of daily use by the joiner who once used it throughout his lifetime. 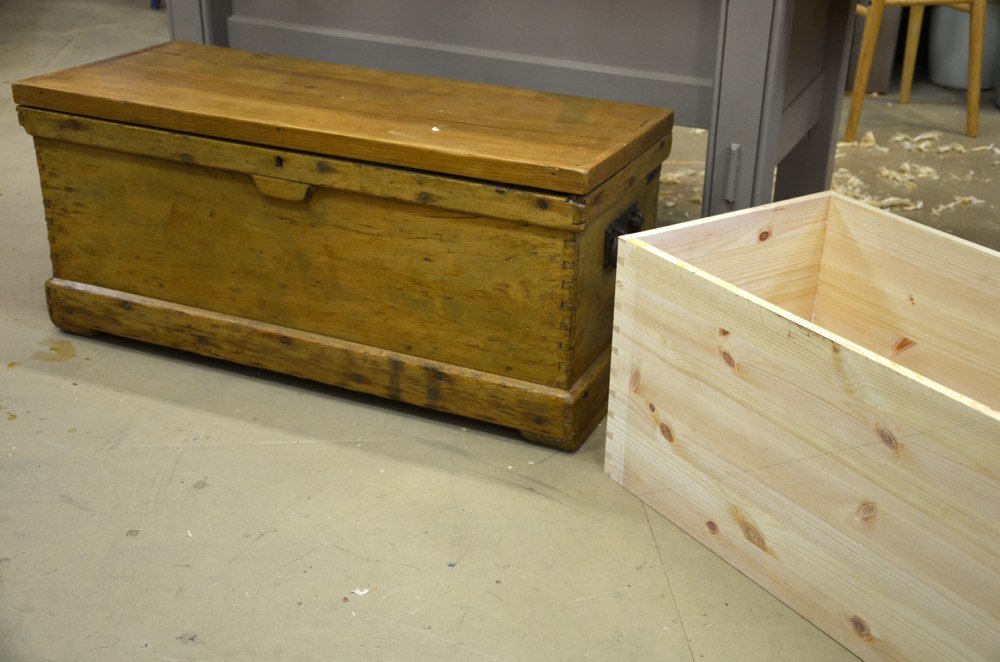 It’s unlikely to have been owned by any other as a functioning toolbox except to contain the tools a direct heir might have been reluctant to sell but a grandchild more than likely might. Needless to say there are some things I gained in the making of mine that spoke well of the former design and the maker. Today I filled it with many planes and other hand tools almost to the brim and lifted it to the floor from my bench and then lifted it back. I suppose I should weigh it but it is somewhere around a hundred pounds I think. You can’t deny its practicality for even a modern user who uses hand tools alongside machines. Here are some pictures to show the final outcome. Tomorrow or some other day I will fill it with my user tools to show how it makes out for everyday use for me. It’s a solid job, scaleable, simple enough to make and could indeed be made by any young and enthusiastic woodworker or any woodworker.

Someone came in to the workshop and mentioned that the last time he made a dovetailed box was in school. Then he said, “Now I do it with a router.” I wasn’t really sure why he added the last part except it seemed like he saw that as some sort of real progress. It wasn’t really progress at all but we let him continue thinking he knew something we didn’t.d Yesterday a joiner five years younger than me came in and said how all of his work was done by machine and I sense the lamenting or even a lostness in his craft or trade. He had worked with all power machines and engineered boards because that was what the trade demanded. 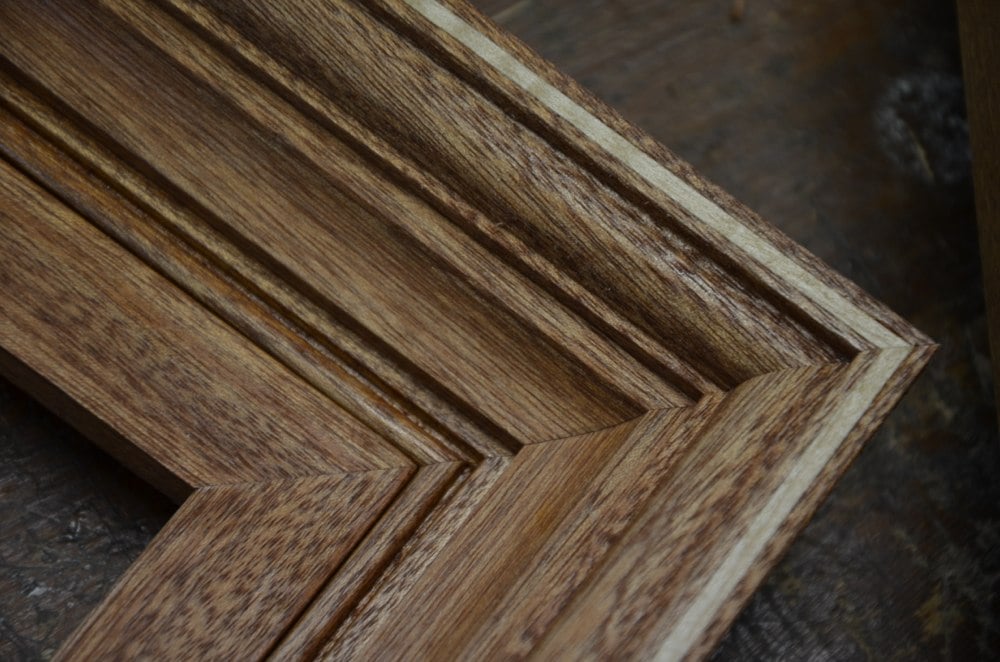 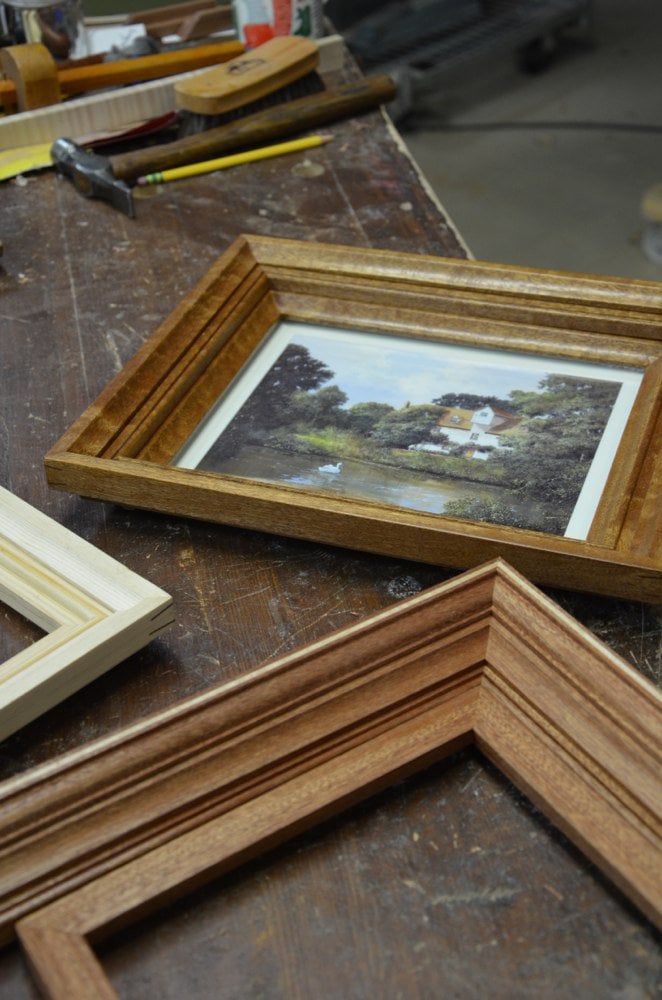 I showed him what we were doing on woodworking masterclasses and some of the projects we made and were making in the upcoming weeks and he came alive with enthusiasm as he traced his fingers over non machined moulds and inlays and saw the progressive work we were achieving outside of commerce. It’s hard to see how progress is measured but I know that the first man saw the router as somehow the way forward for him without realising he will likely never sense the accomplishment true creativity demands of us. I am glad that we have an alternative and that we can see and feel the differences that thankfully distinguish the two different worlds of real woodworking and mass manufacturing methods. 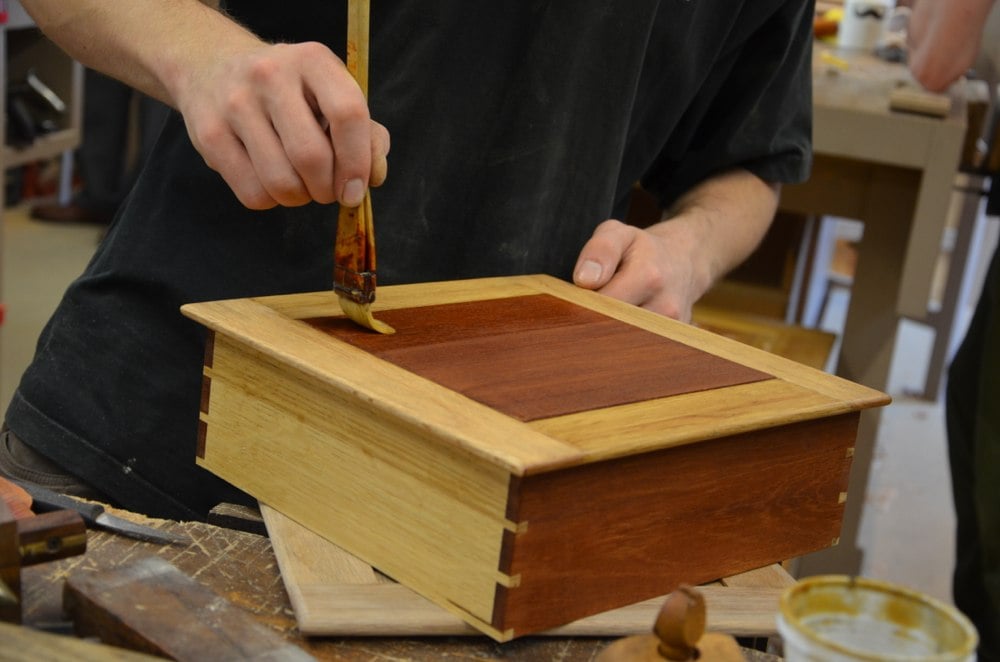 I watch John at different times in the day, as he progresses his high-demand box. Minute by minute he tackles the issues that set his work apart from others with grooves he ploughed by planes and mortise and tenons with mortise walls less than 3/32” thick. To say the box is stunning is perhaps overkill, but actually, in its simplicity and beauty, it becomes all the more stunning. 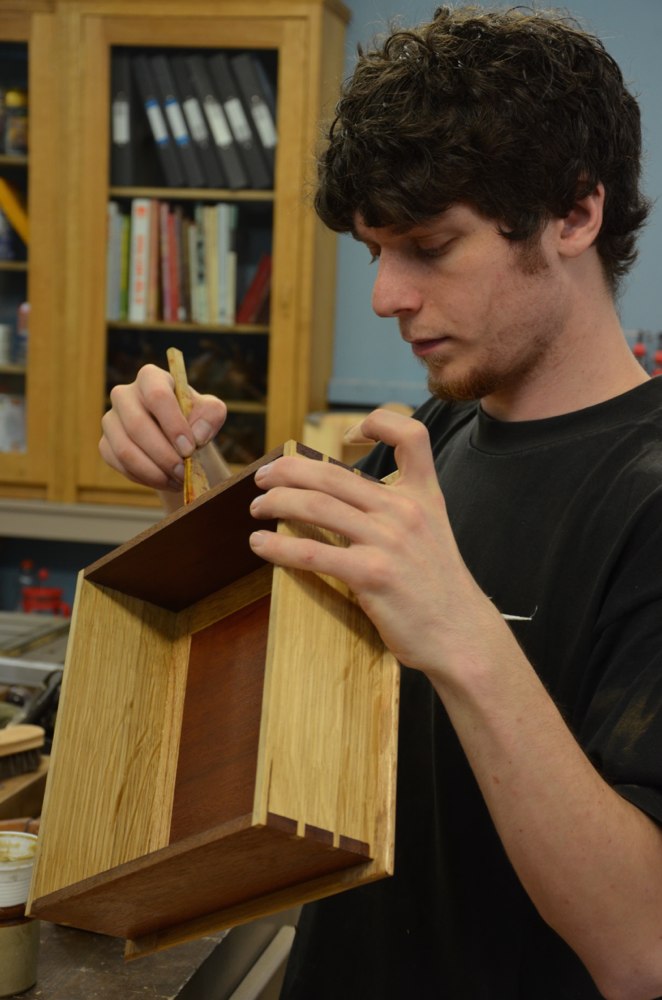 Gifts are critical to developed work and very different than bought projects we might be paid to make. These become priceless in that money does not buy the heart behind them but the craftsman gives from something deeper than money has pockets for. Seeing the care he fathoms the fibre of the wood with I see not an artisan but a craftsman skilled with his hands and his mind. The well placed chisel and the shaving’s thickness from a plane defies the security of caution and enters levels of risk that demand intensity and skill. The result is pristine separation from the machine. Nothing less. So glad John has spent time this year with us. Watching him work has been a breath of fresh air. 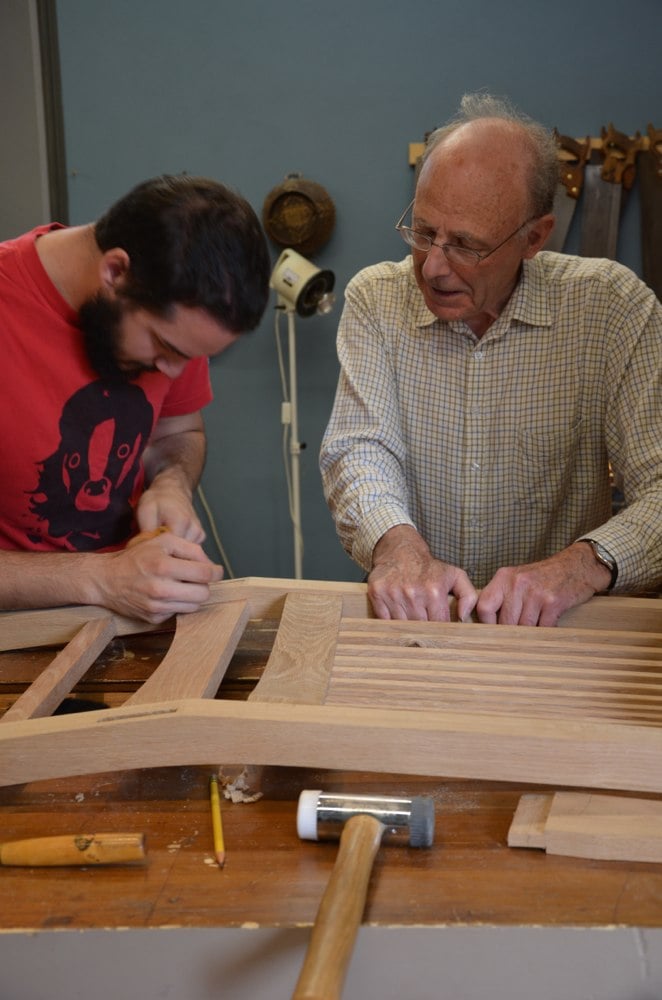 Now today we progressed the rocking chairs to the point of the rockers and arms. It’s been going well and we have all learned a great deal as we always do. Phil teamed up throughout the day and we have a couple of days et to finish off and make the leather seat part. This too is a part of the course you can’t quite buy. Yes people pay for the workshops and the training but then there are the heart issues, the help issues, the getting stuck in issues and that’s reciprocated by people as in this case when Gerald turned up this morning with a fruit bake he’d baked for everyone to enjoy throughout the day. We all had a great day again and that includes me too. 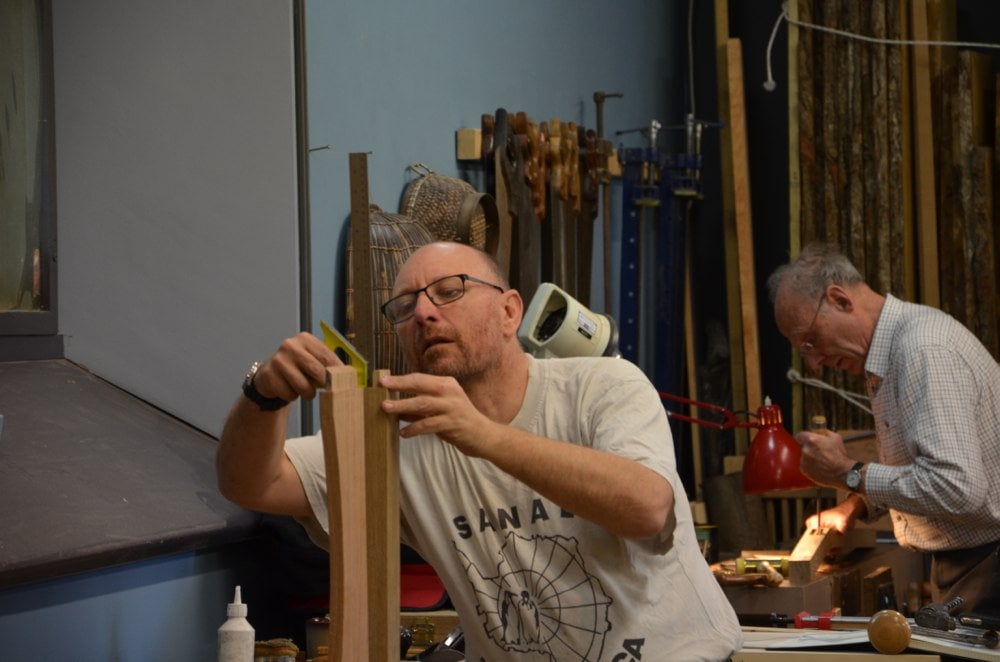 I finally got the toolbox finished and fitted the hardware. Rather than talk about it you can see the pix below. 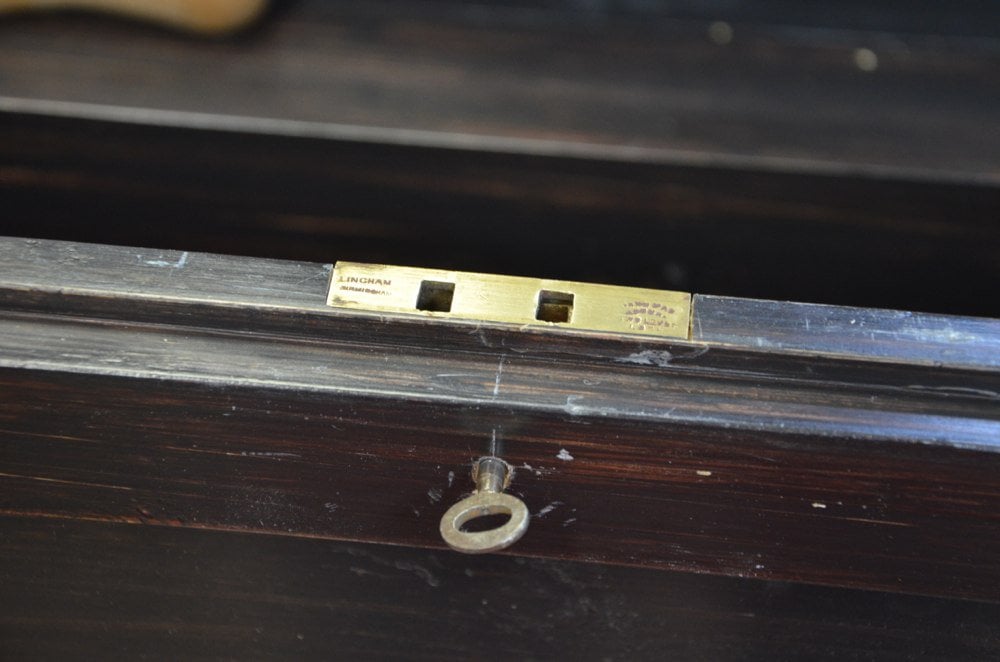 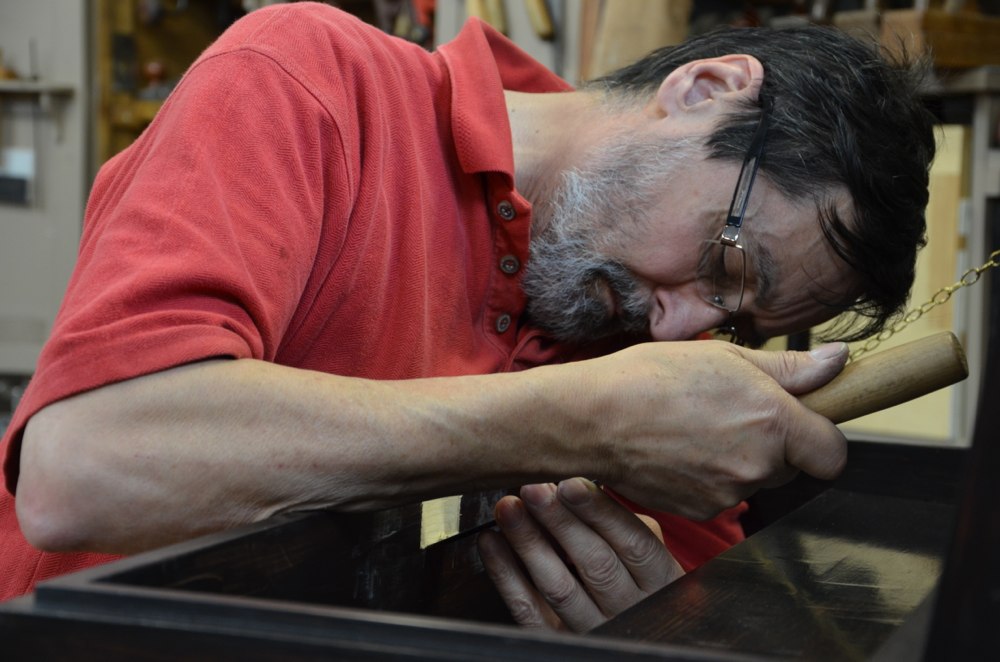 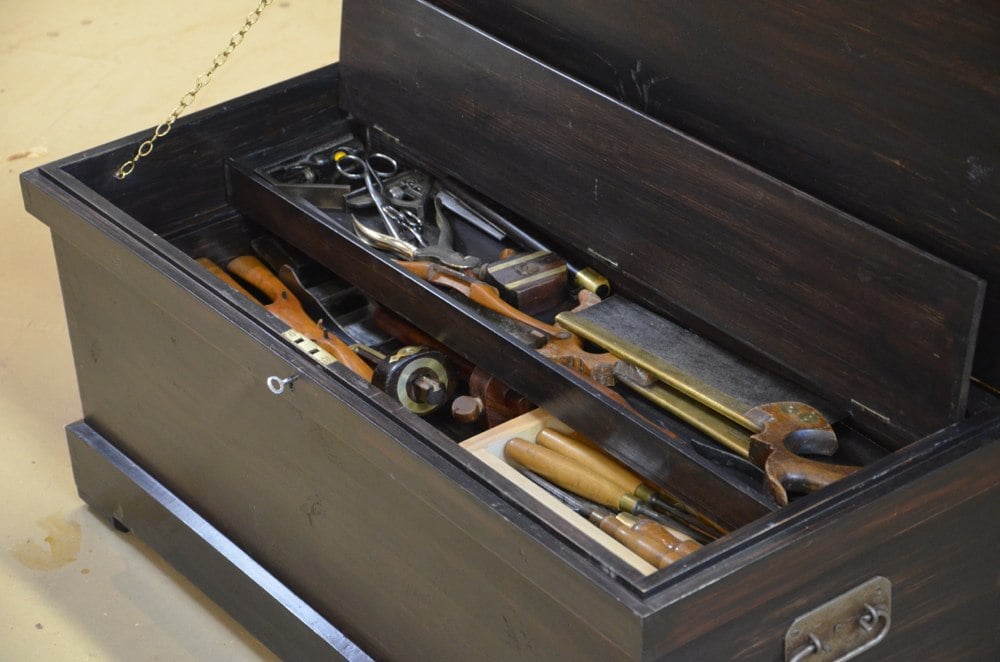 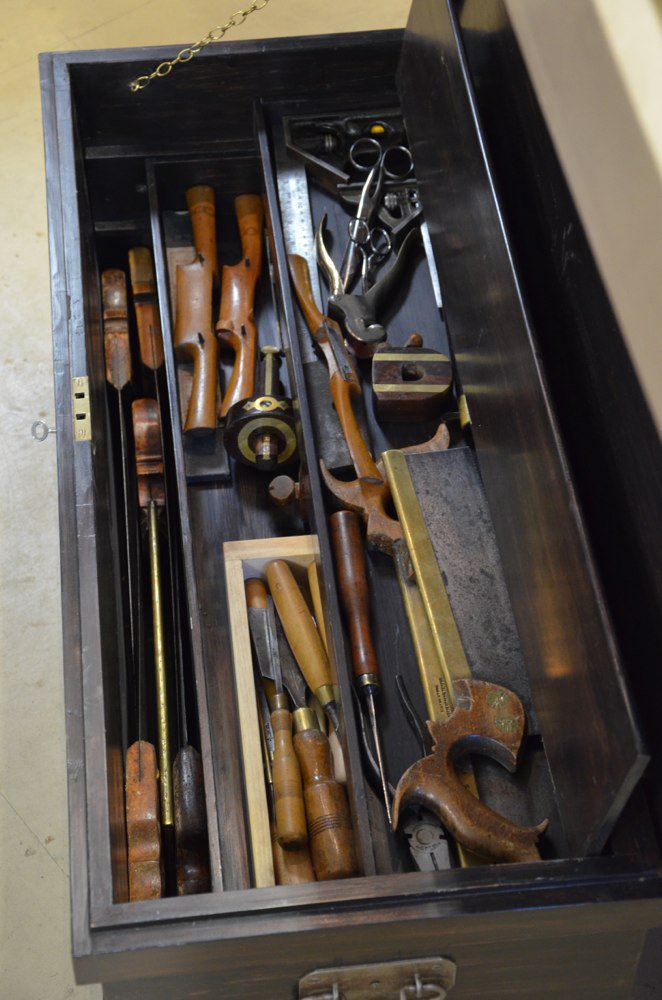 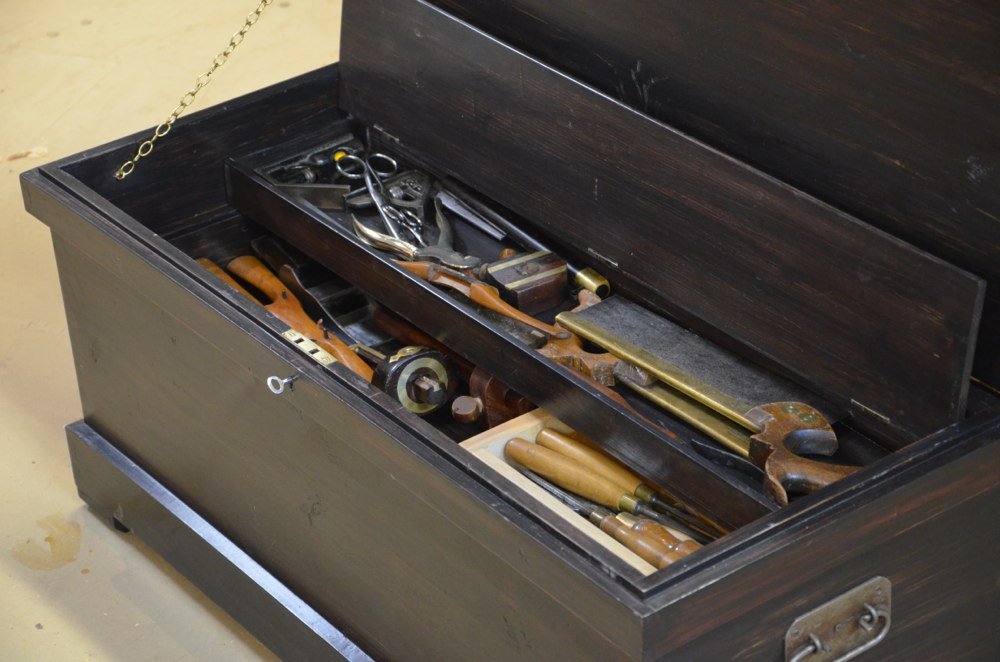 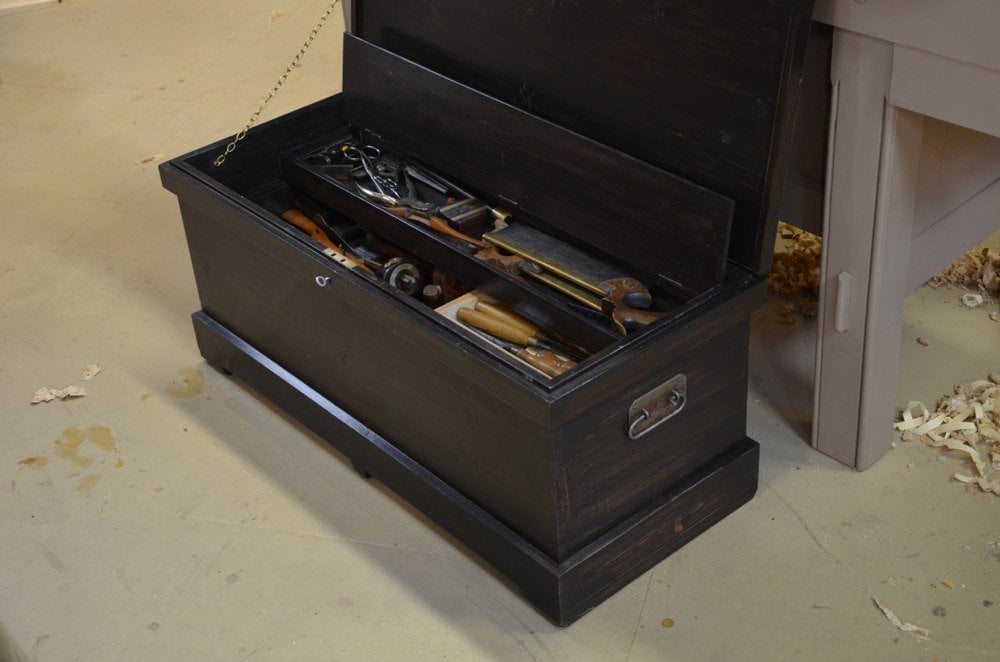 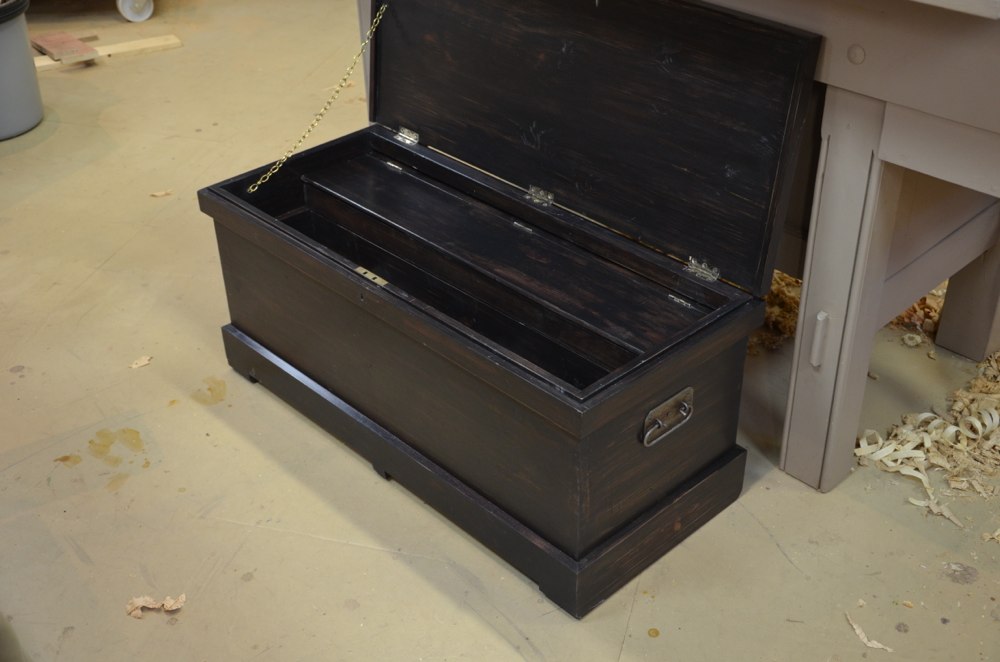 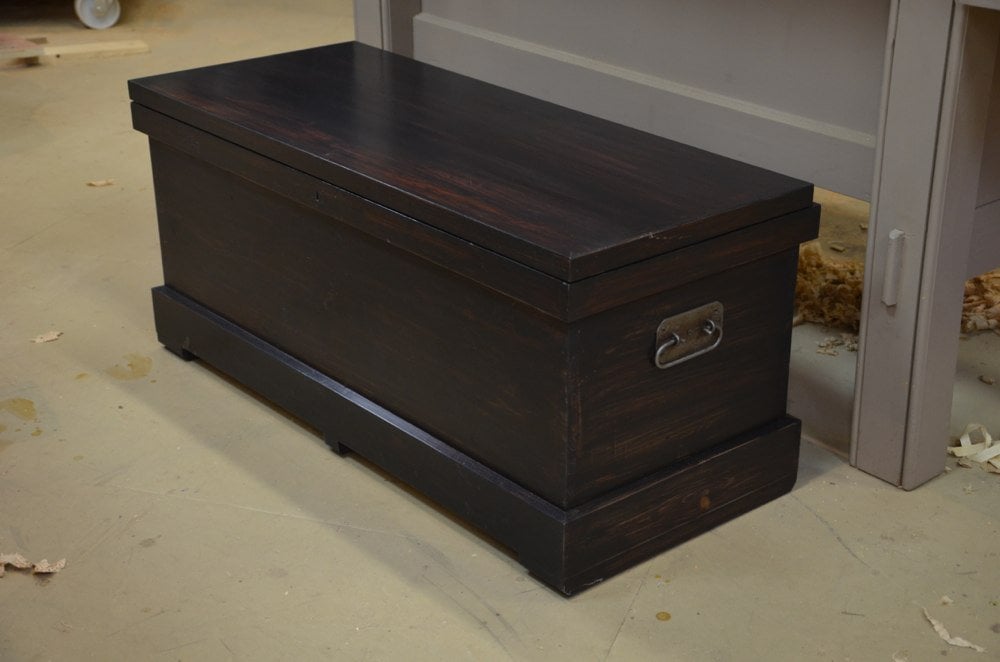 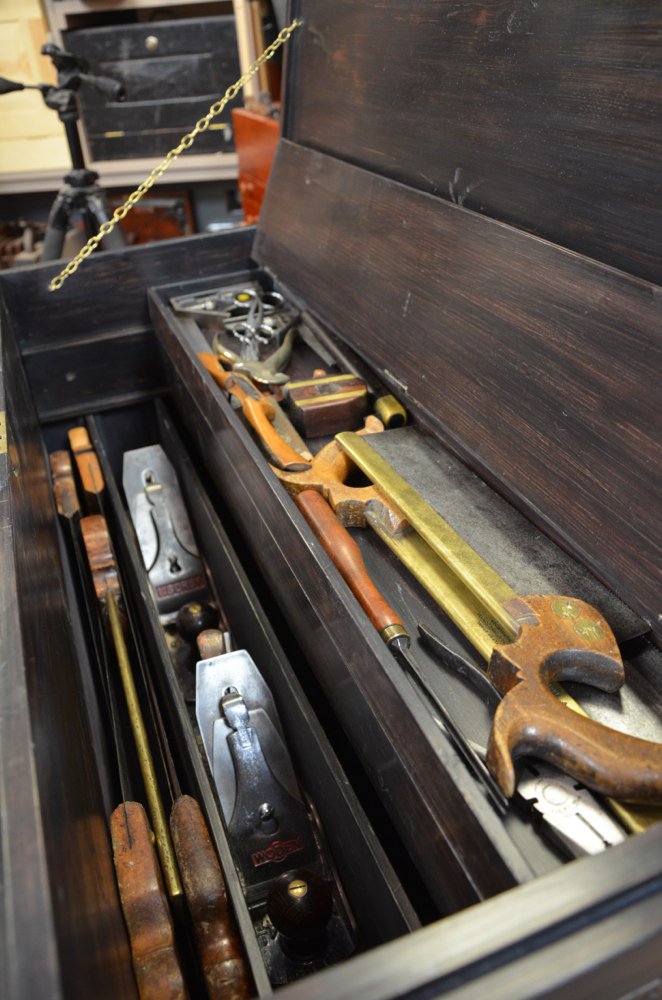 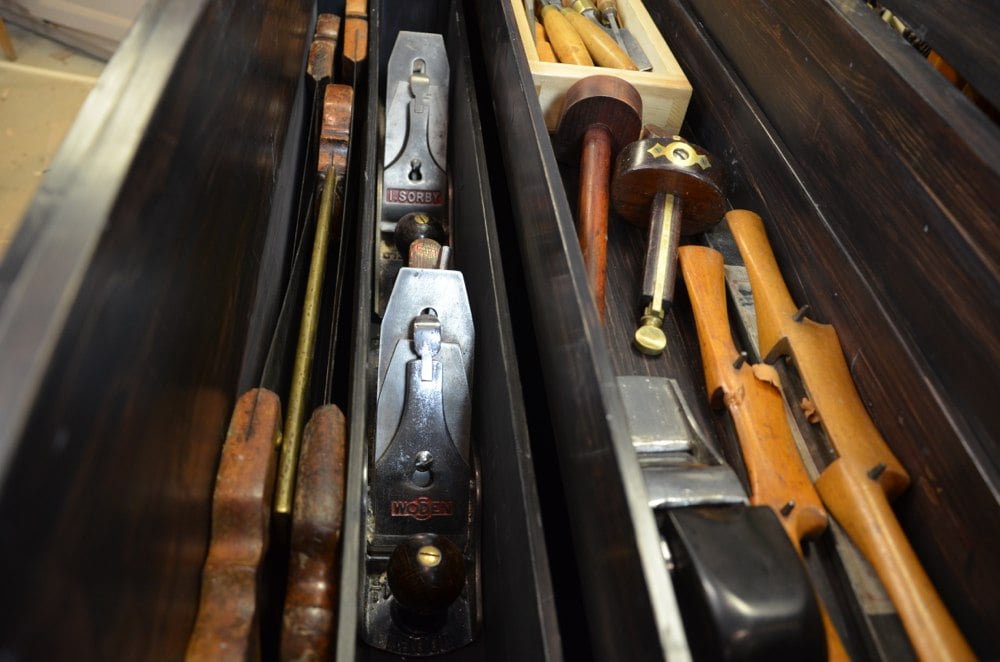 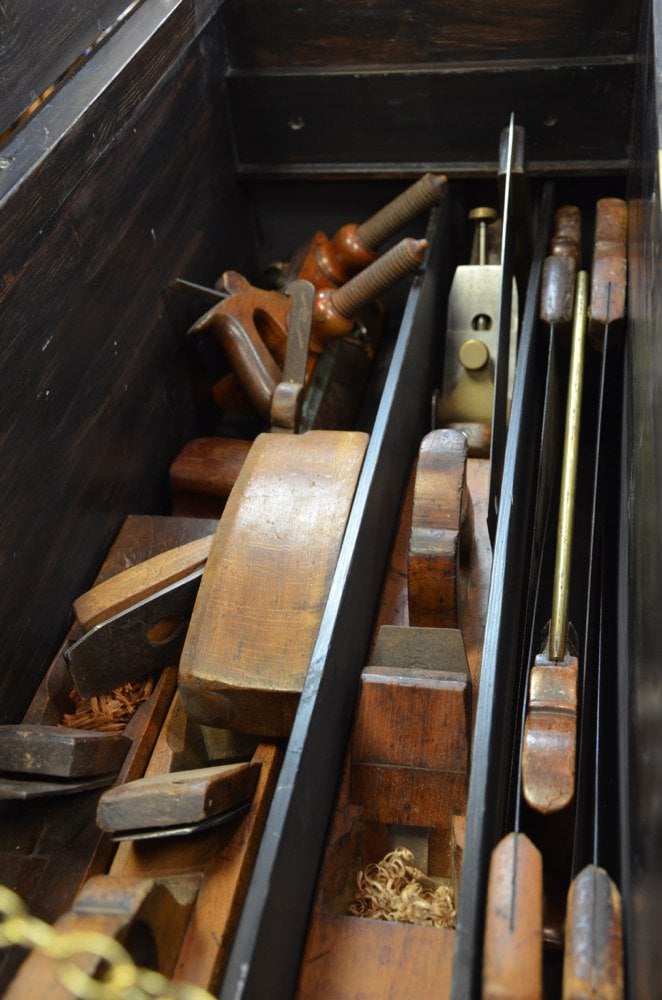 15 thoughts on “Just Another Tuesday Morning…”