Dovetailed Skirting and Lock and Hinge Rail Misnomered as Trim

There is more to it than that. The skirting boards protect the box from damage or at least reduce the risk of main-box damage, that’s true, but it more importantly thickens up the base area corners to make for much increased structural stability and solidity and make it solid it does. It’s surprising how this narrow band of thickening stock totally transforms the feel of the toolbox. Accuracy is essential for this part of the construction because there is no margin for variance if the joints are to seat fully into both recesses. Both are clearly visible. Many makers actually used half lap dovetails here as this means the seating of the tails in the recesses is only seen from one face as the depth of the tail recesses can be marginally deeper than needed and not be seen. 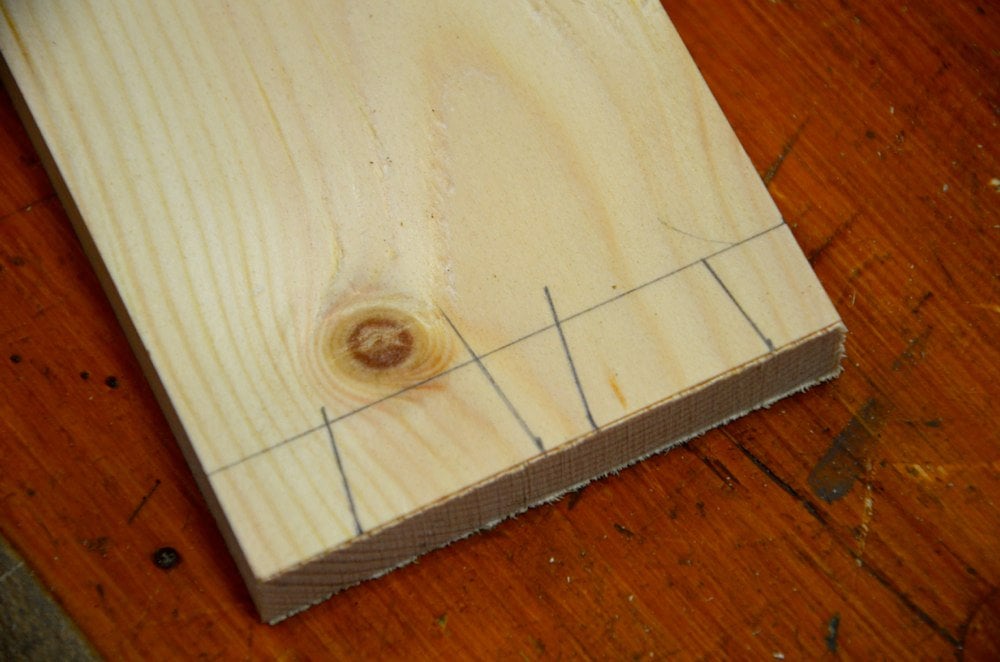 In laying out the dovetails I made an allowance for the top pin so that the dovetails pins show the same size. The top edges of the skirting boards are chamfered 1/4″ inch so it’s a question of adding that to the top pin. in this case the the tails are 3/4″ so the pins are 1/4″ for the bottom and mid pin and 1/2″ for the top one. 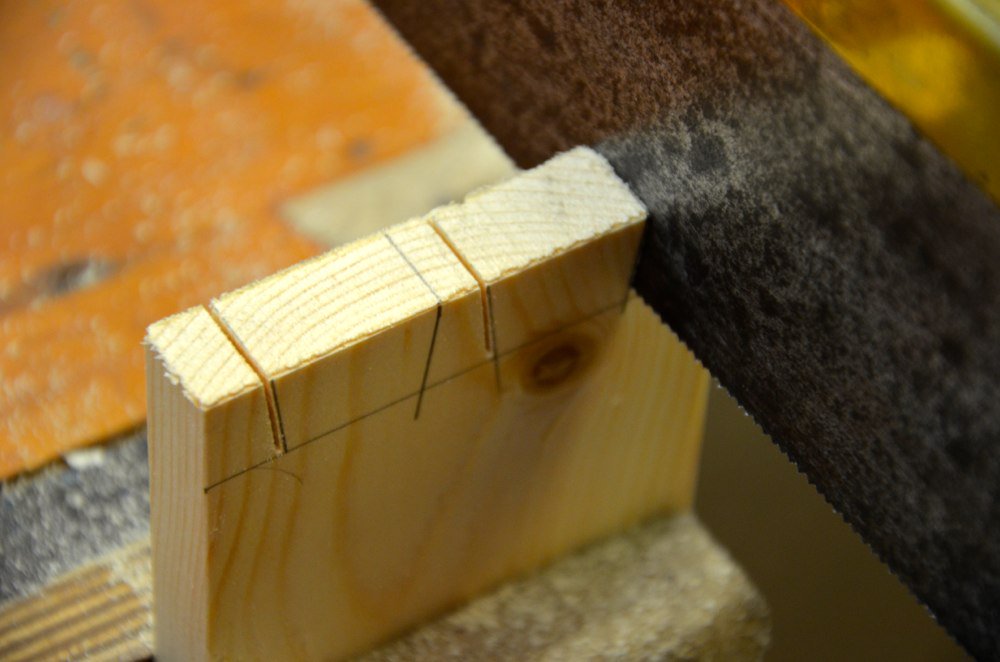 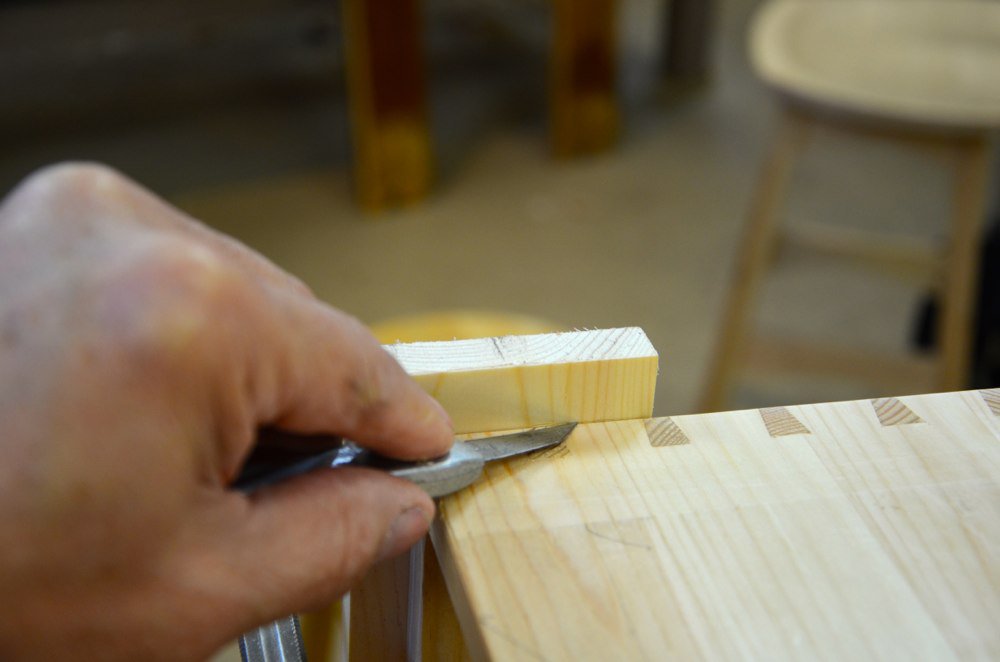 The tail knifewalls between the tails are taken directly from the box with a knife and so cutting exactly to the knifewalls means that the shoulders of the longer front and back pieces seat perfectly to the walls of the box with no margins. 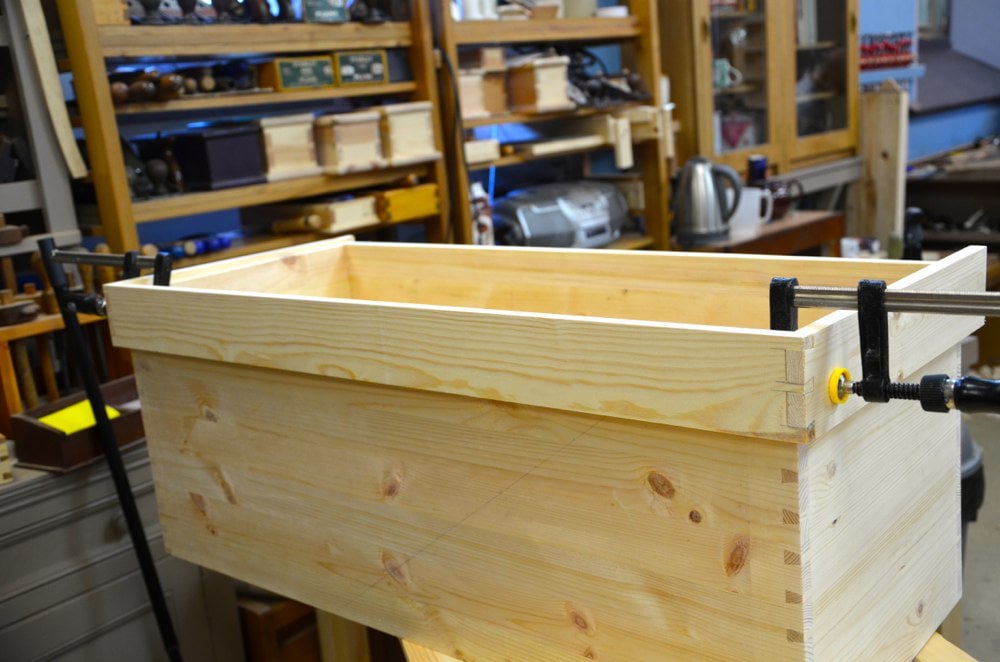 After cutting the first dovetails to one of the end pieces I fit the two dovetails into the front and back skirting pieces and let the opposite ends float past until I have fully fitted and seated the first ones. 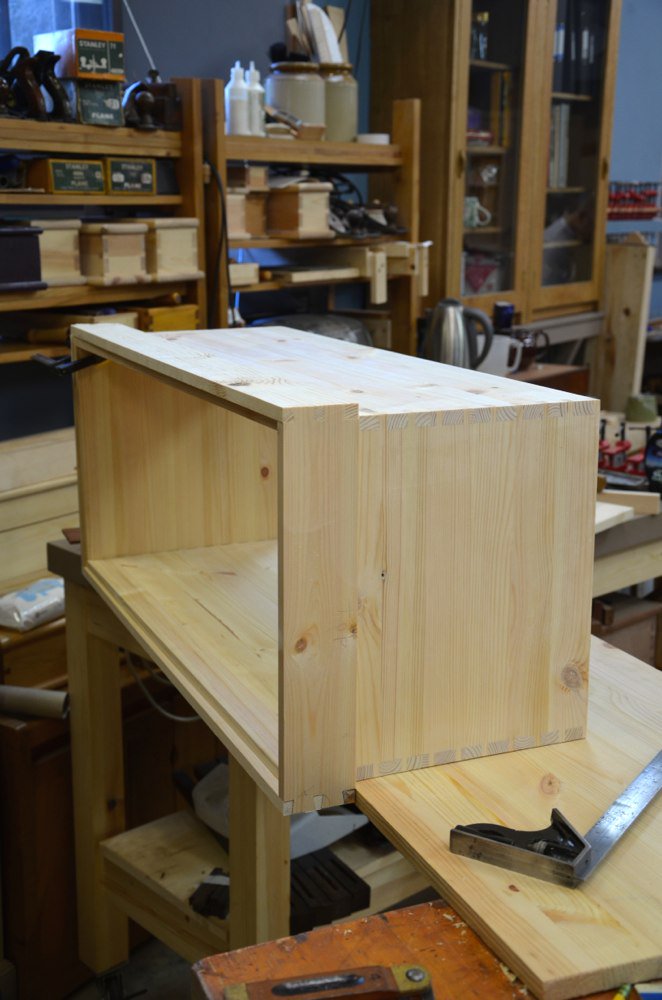 Once fitted as shown I can mark the bottoms of the tail recesses at the opposite end and add the thickness of the tailpiece for that end at the same time. 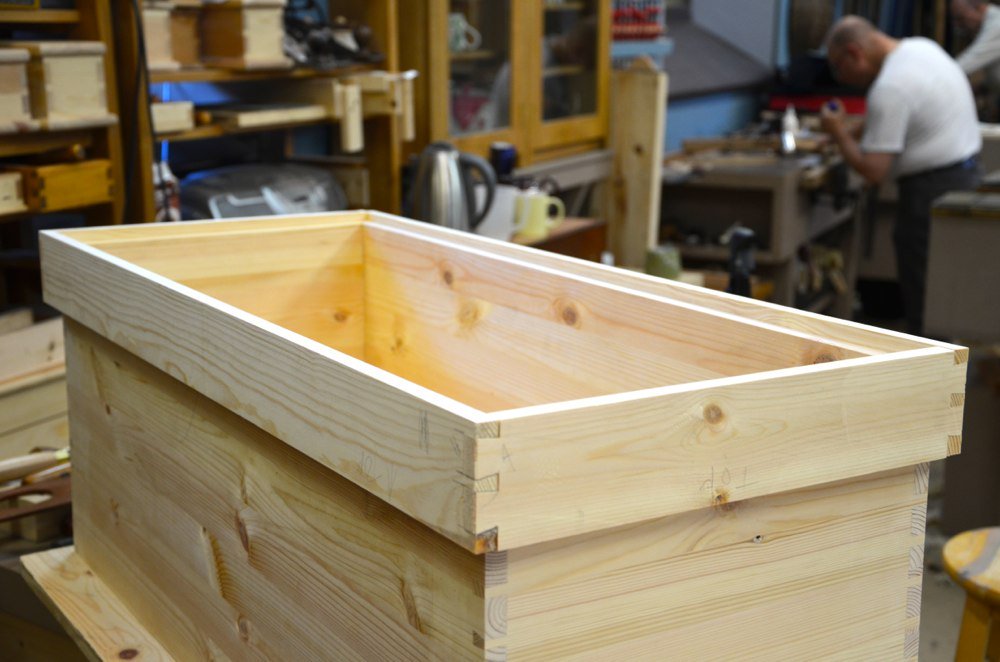 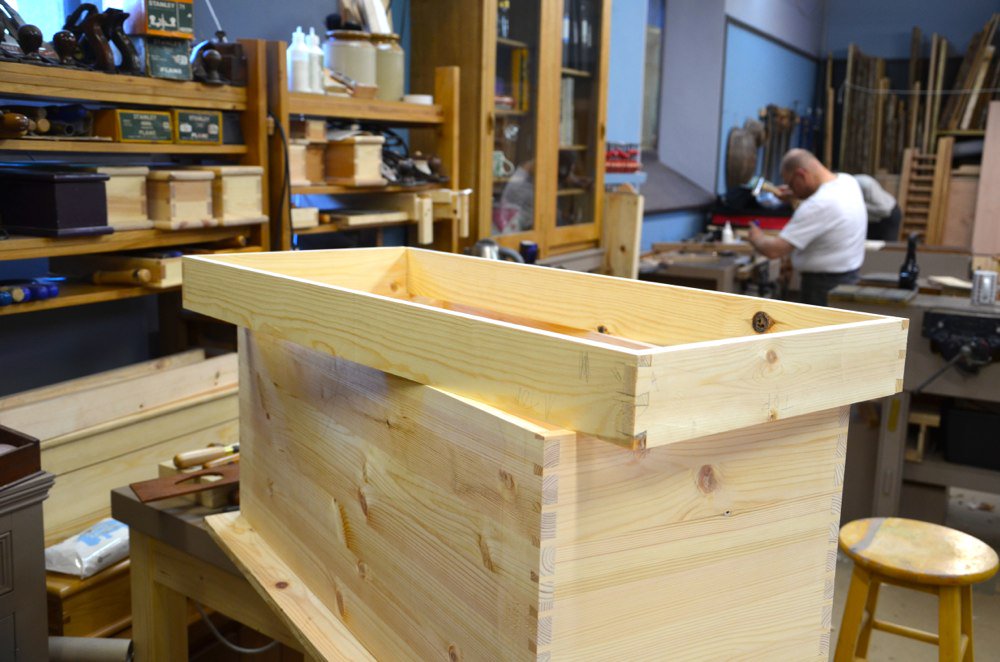 Having also fitted and cut the dovetails on this end too, I make the tail recesses and check the whole for fit. 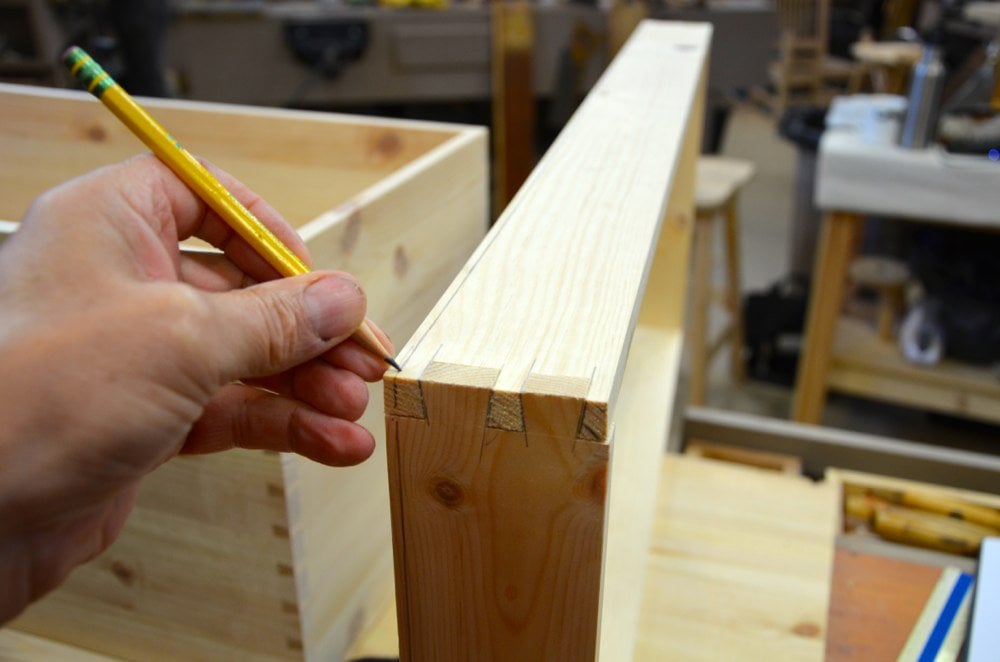 The top edge of the skirting boards are chamfered by 1/4″. I use my fingers as a gauge to set the depth and pencil to mark the depth to work to. Using a marking gauge will cut the surfaces and leave lines or grooves in the wood. 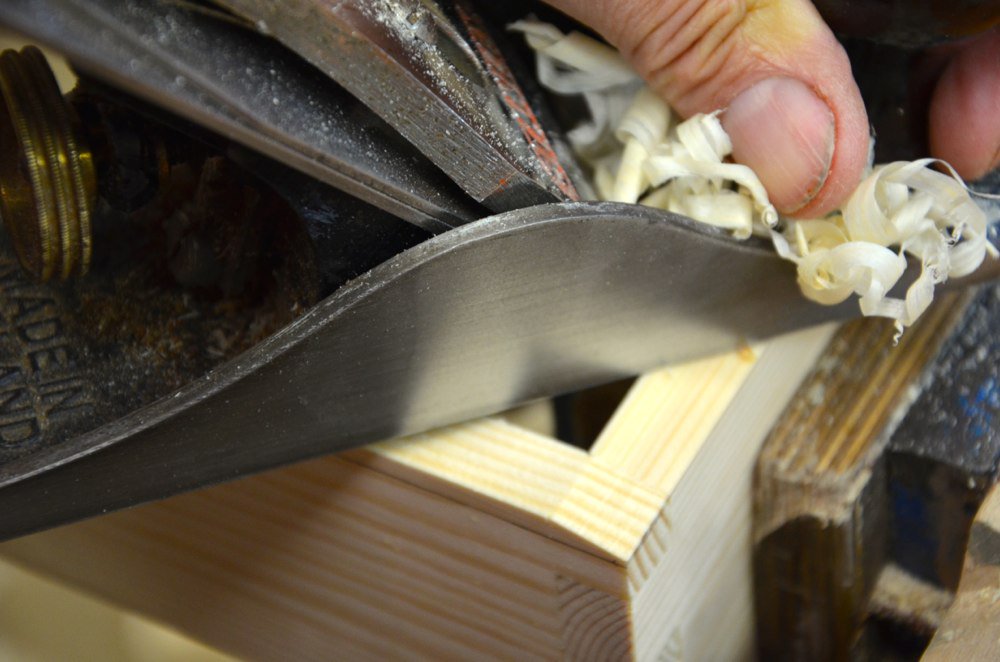 I plane the chamfers before I glue up for ease and then all I need is a trim swipe to finish off the edges to final level. 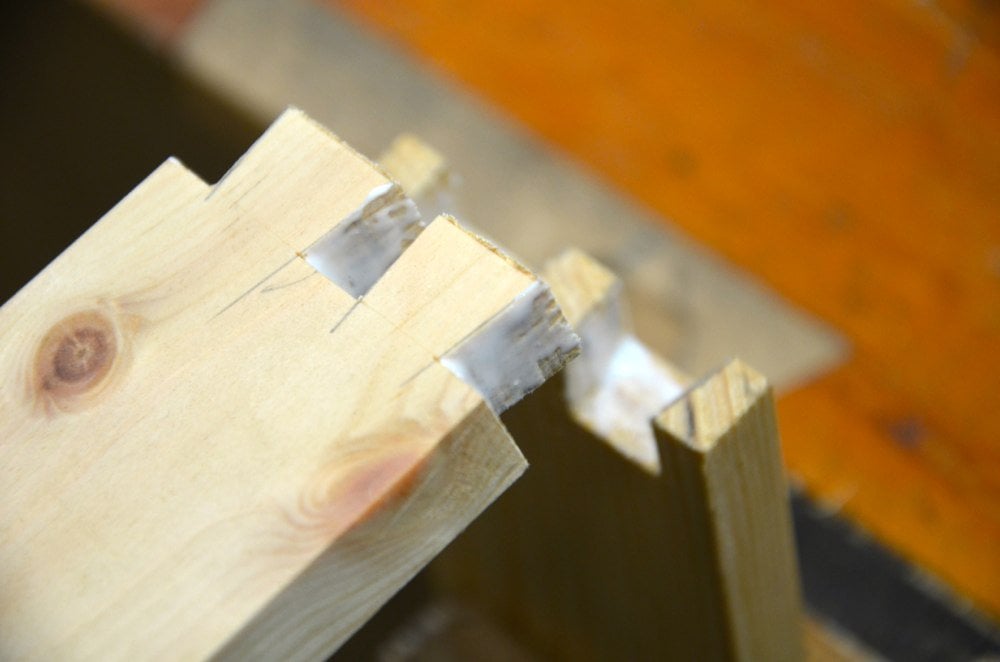 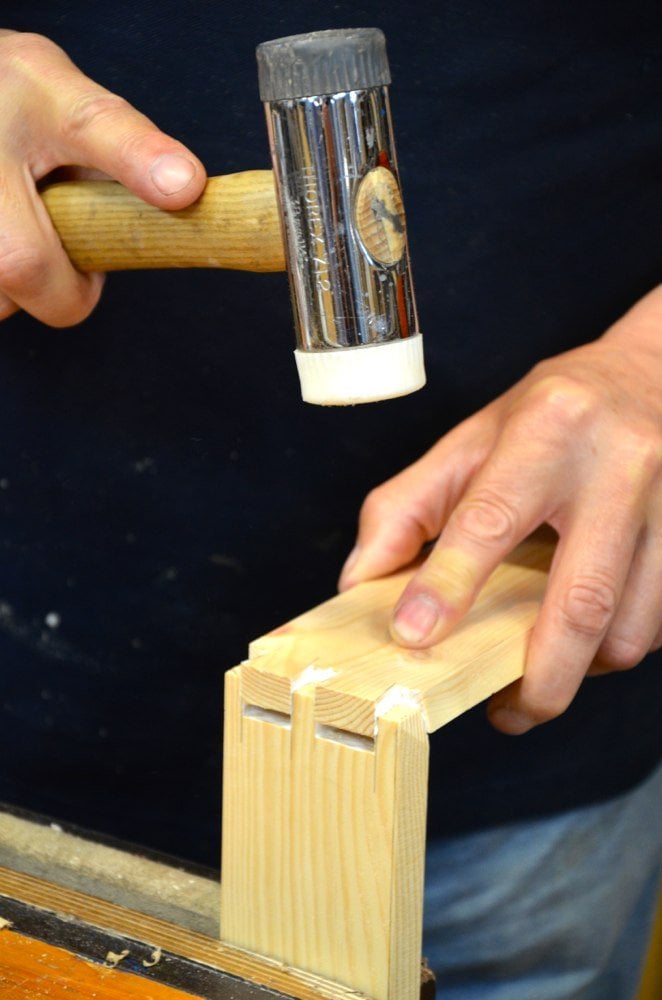 I glue the skirting frame together with the two long pieces and one end piece so that I can clamp these three pieces in place first. If I glue the whole frame up and slide it on the glue is push to the top rim of the skirt. Not good. By gluing and clamping the three pieces I can add then add the forth. 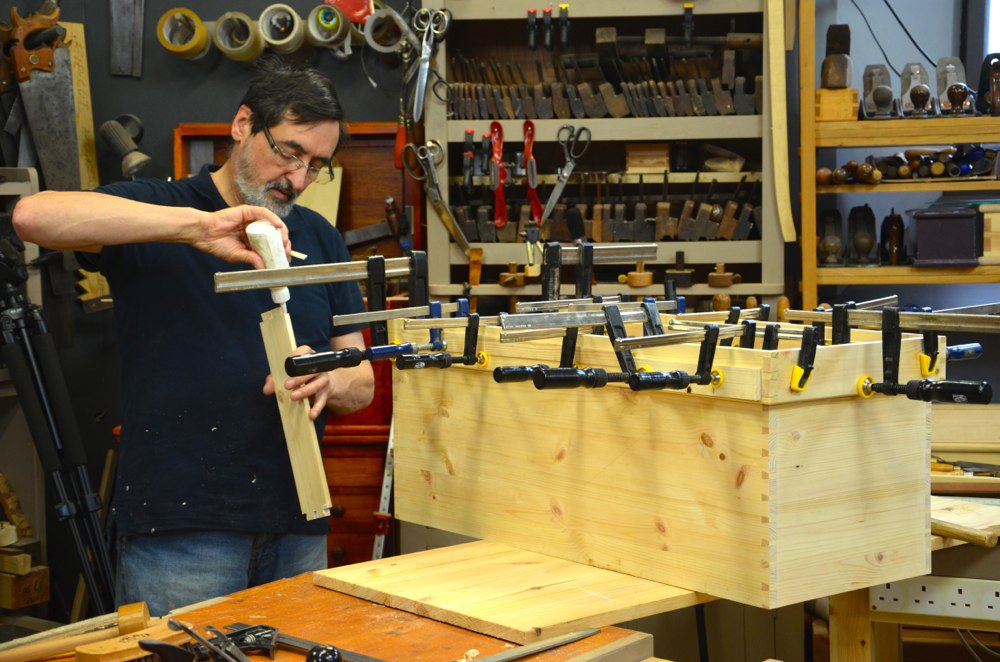 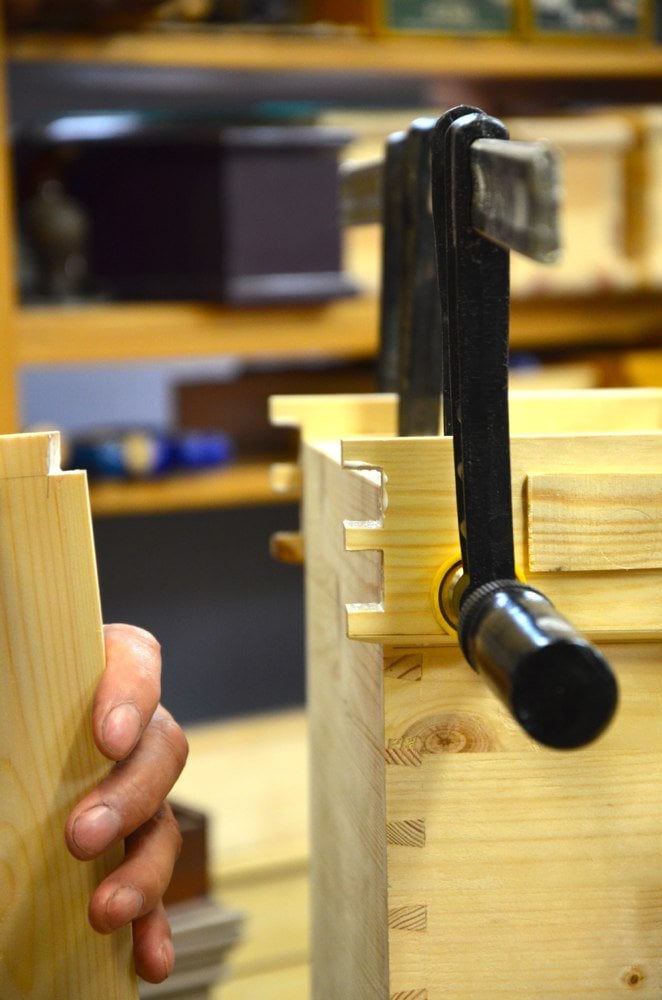 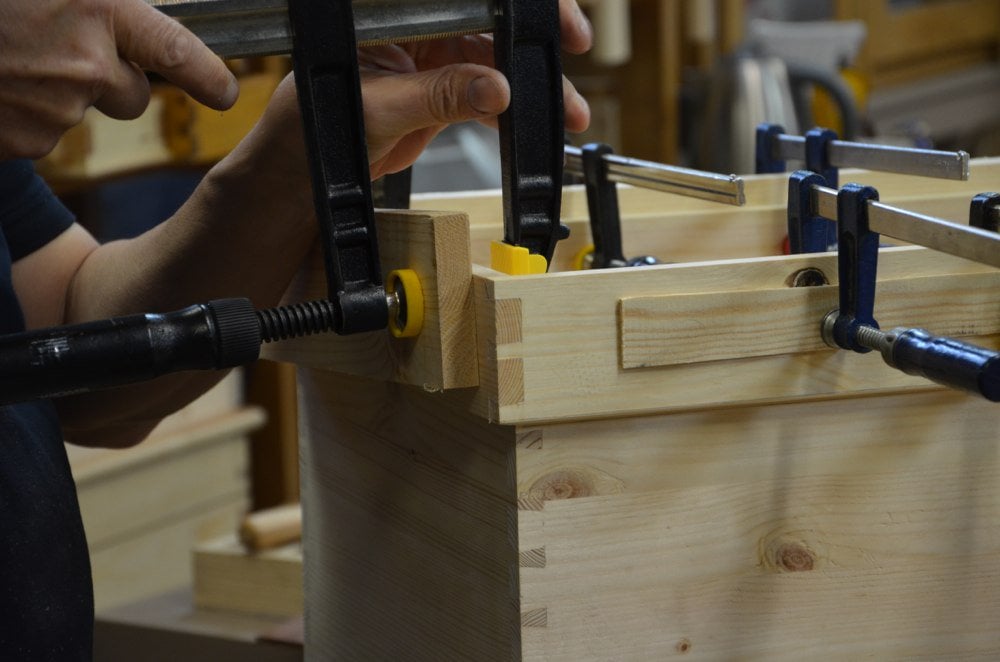 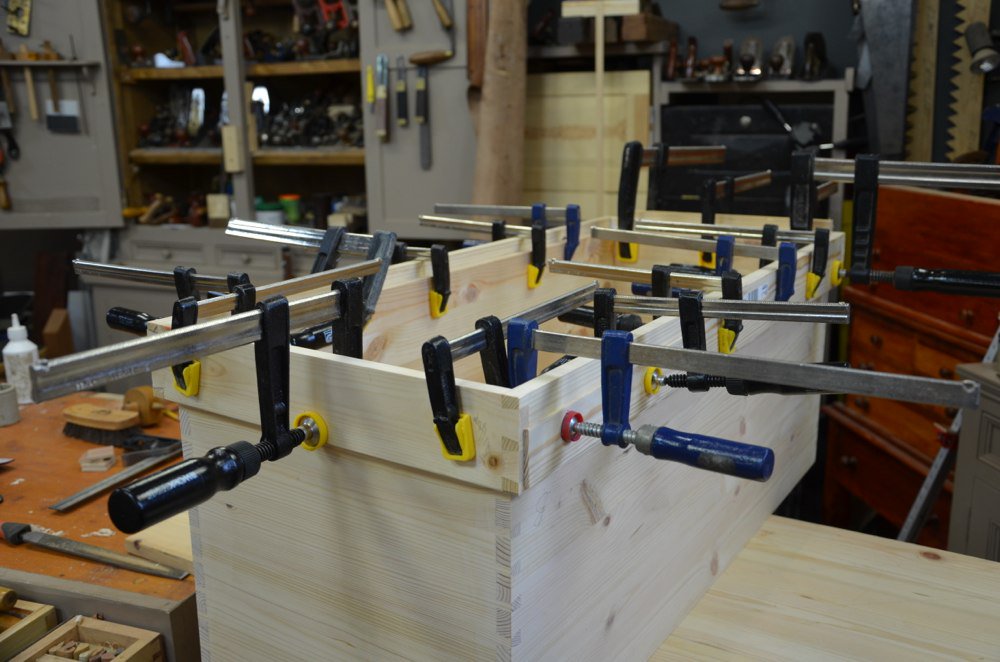 Here I am gluing the skirting board to the box. I have fully planed and cleaned up the box beforehand. Instead of screws I have chosen glue and clamping for greater adhesion and solidity. PVA will work best for this.

Here you can see the counter-positioning of the dovetails as opposites in orientation on the original box. Also note the screw heads seated to both faces. All of the corners are either worn rounded or and sanded rounded in the previous restoration by the dealer. 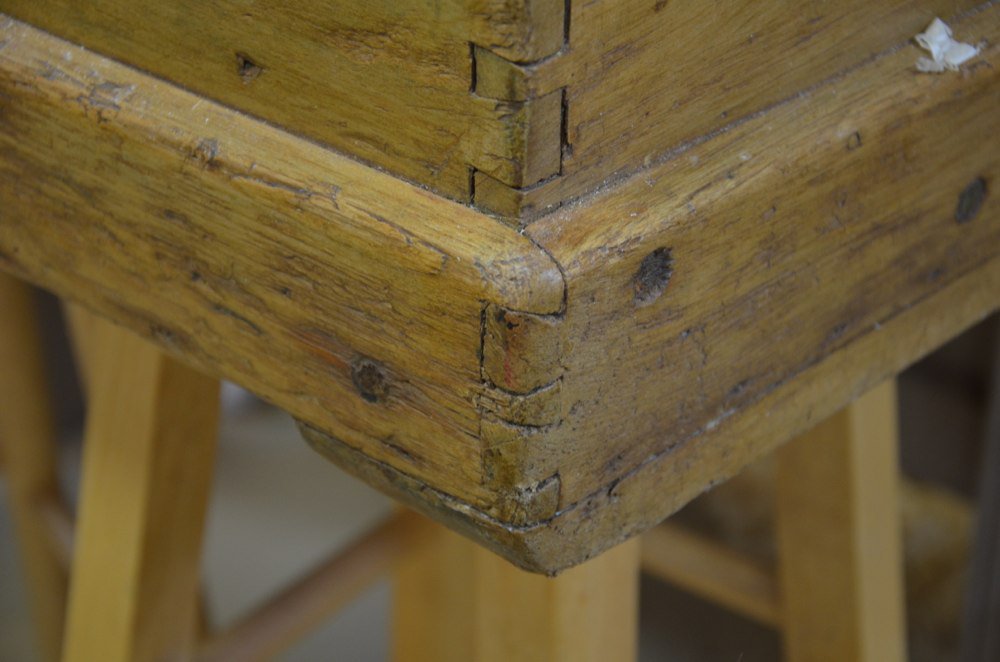 The original box was completely unglued and relied on square cut nails and screws for all joint security. Someone wrote to me and said they had read that the reasoning for loose skirts and trim was easier removal if needed should replacement become necessary but that’s not the case at all. Speed and a lack of glue were two practical reasons here. The man on the job was in quick mode and the work therefor was quickly and readily done. He installed the tools he needed to transport for his work and got on with making his living. It wasn’t an uncommon practice not to glue joints, I have come across more boxes unglued than glued I think, but I find that it’s better when they are. Things, boxes especially, last all the longer. The original box has had many patches and breakages so I think changes are necessary and I made them in mine. 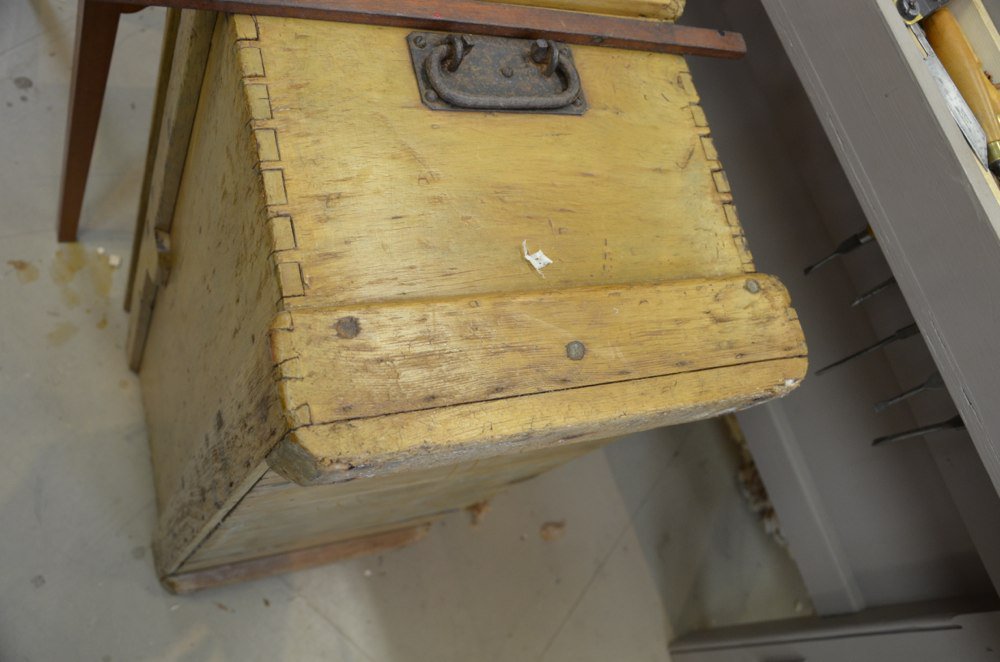 The theory of skirt and top trim having dovetails opposite to the main box dovetails is simply to have counterposing forces. Adding the screws makes everything work and I am have no issues with screws as fixings. The nails, the square originals, not those added as later repairs, worked fine but in both the case of the nails and the screws they both failed because they rusted. This makes me think that the wood was still quite wet before construction began. In some parts the screws and nails were quite rusted in and therefor the skirt and top trim were screwed into place and this prevented any chance of the box parts separating. In other parts the screws were rusted to the point that they were no longer really holding at all. I did remove some of the screws, but this caused more damage and so, with a little careful levering, I found the parts partied readily with little pressure. I left the screws in place mostly and cut around them when I reseated the parts. I screwed the parts back in place through the walls from the inside on the original. 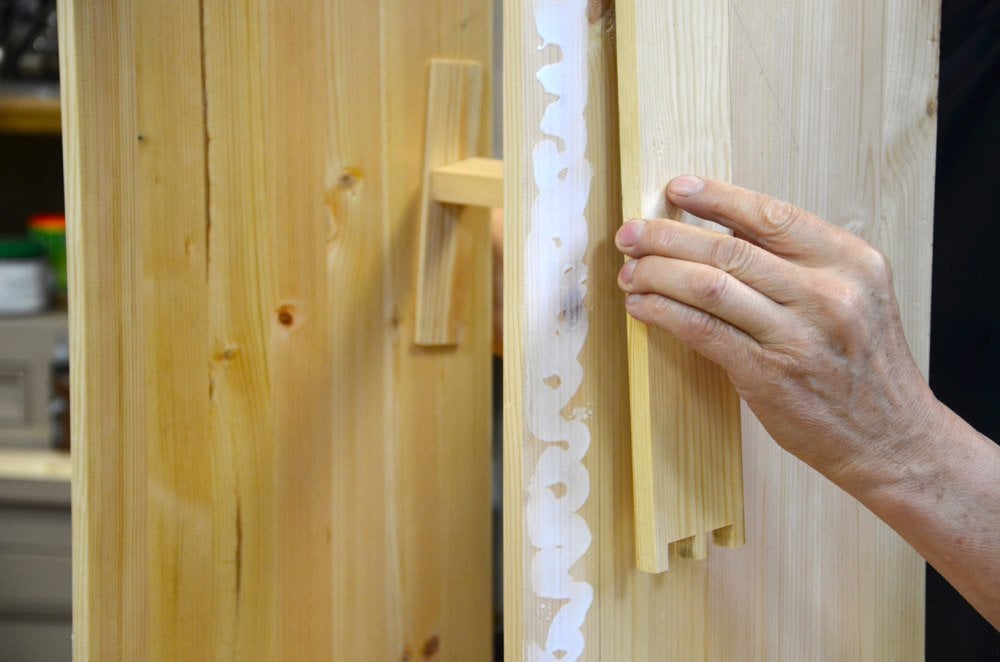 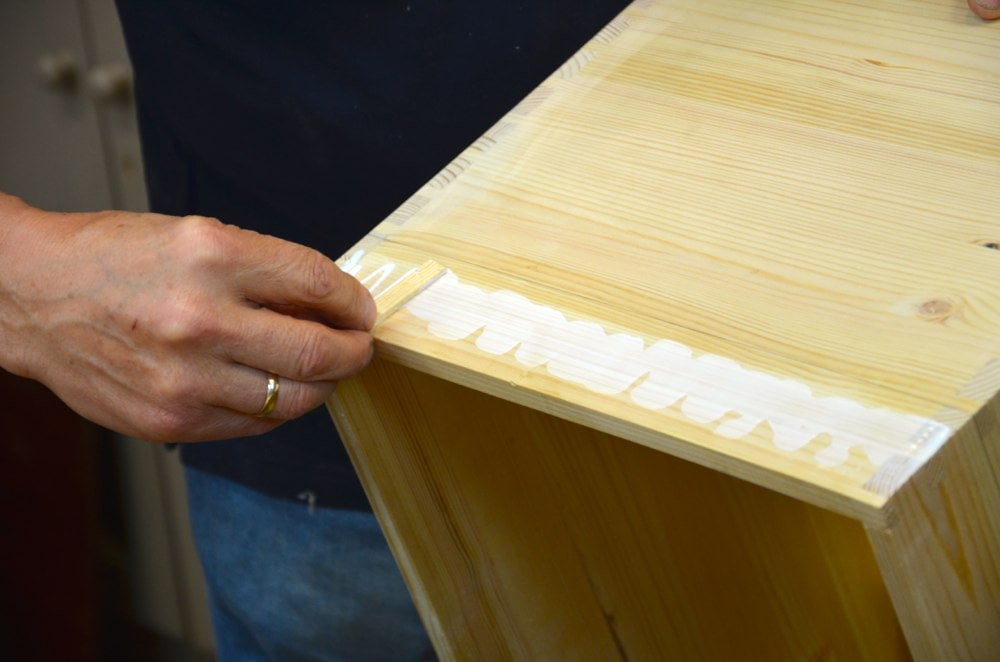 On my new box I simply glued long grain to long grain, which is sufficient, permanent and renewable. 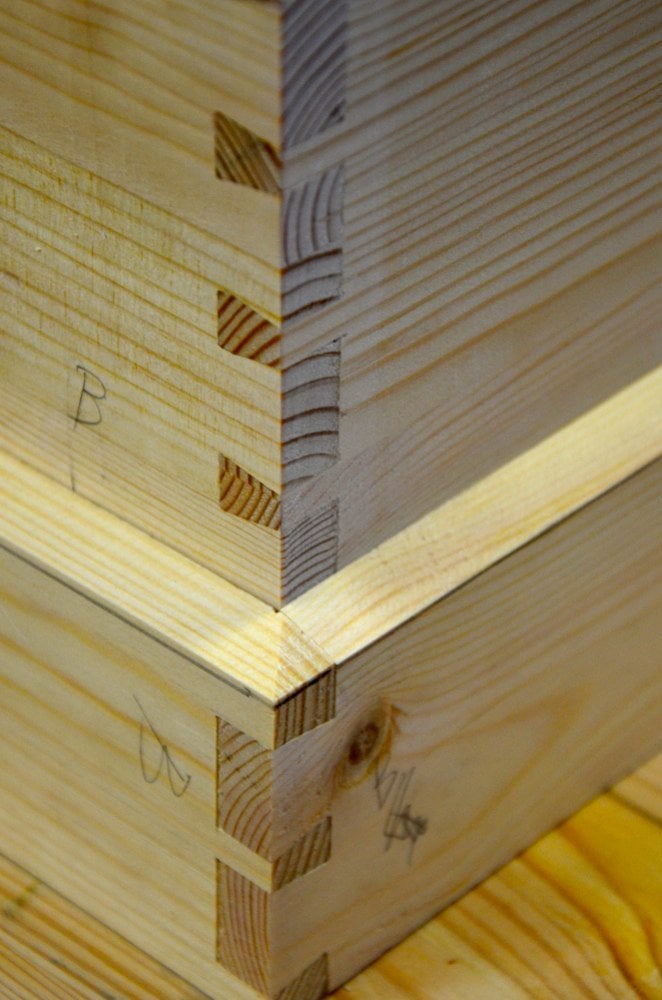 Here is how the skirt looks now.

5 thoughts on “Making the Toolbox – Skirting , Lock and Hinge Rails”