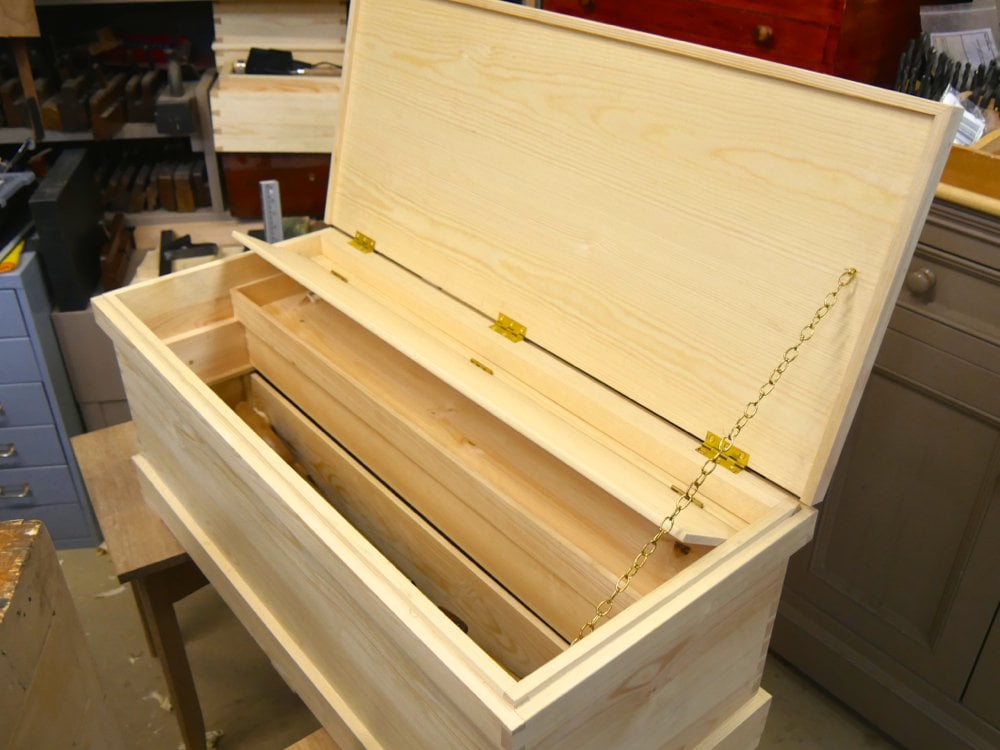 The past week has been busy with a variety of things accomplished, partly done and planned to be done soon. We finished off the toolbox series all the way down to lock and handles and we will most likely make a 10 minute video on painting it using layered milk paint or similar. The mixture was fairly typical for a new-year start really and launching into it means a new batch series of smaller, carry-away projects to build stock up for selling in the spring when the tourists come to Penrhyn Castle—things like spoons and oak clocks, painted boxes, cutting boards and such. We’ll make furniture and sell off some of the projects we made for the films as well as sign people up for workshop classes too. The increase of students from other countries and continents to raise the percentages to anywhere between 60-70% this last year. This makes our training more of a business business than we might really want. Working to find the balance can be challenging because when everything becomes a priority you really have to start setting limits and prioritise in order. 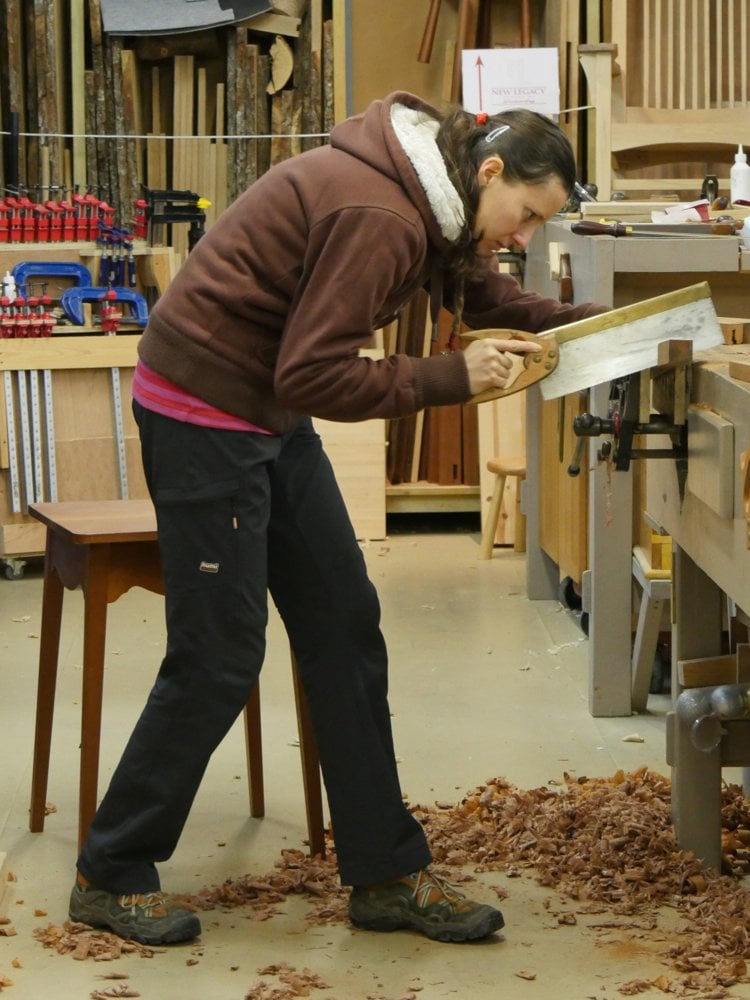 Lea made really good progress this week as I expected. Not sure if I mentioned it 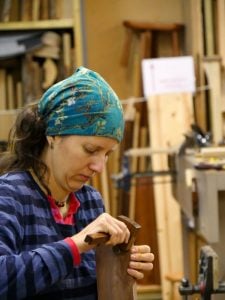 previously but she attended one of my month longs a couple of years ago. Anyway, she’s been making the splay legged table we made on woodworking masterclasses last year, as an upcycling project from an old mahogany table. She’s prepped her mahogany, chopped the mortises, tapered the legs and started fitting tenons. 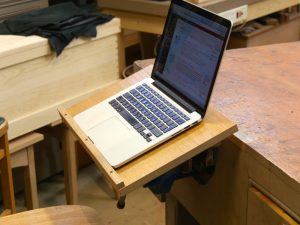 I have been splitting my time between between working on my new book, sketching and drawing, photographing and spreading the good news about lifestyle woodworking. The shop is undergoing a bit of a makeover around my bench area to fit new aspects that make the filming easier and more versatile 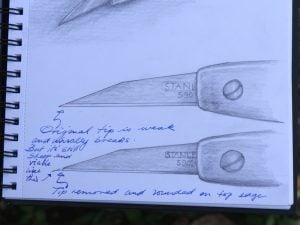 so new equipment means squeezing my working area and renewing a few things. One question I wanted to ask is this. Some of you have asked me to walk you through some of my tools in the cupboards behind me and to the side of me. You know, unpack them and talk about them as we film. To show what they do and how they work as I lift them down or out. What do you think about the idea?

The blog yesterday seemed popular and I think with good reason. Here are a couple more thoughts to flesh out what I said. I use eBay mainly because of the leg work it saves me and because of the demise of DIY shops, hardware shops and other sources we once had. No single shop can stock the diverse amounts we have access to at the click of a key and delivery for me is often next day. Whereas I strongly dislike wasting time trolling through the excesses of the internet, I have established a protocol that works well for me and my searches take a matter of minutes not hours.

This week I found several items I needed that saved money and gave me good value in tools and shop supplies. 10 metres of 240-grit open coat sand paper in the local supply merchant cost £13. 50 metres online for the same make and product costs £19 with free 2-day shipping to my front door. Whereas I would much prefer using a local retailer and wouldn’t mind paying a normal markup of 100%, I owe them no loyalty when their mark up rises to three times and often more. 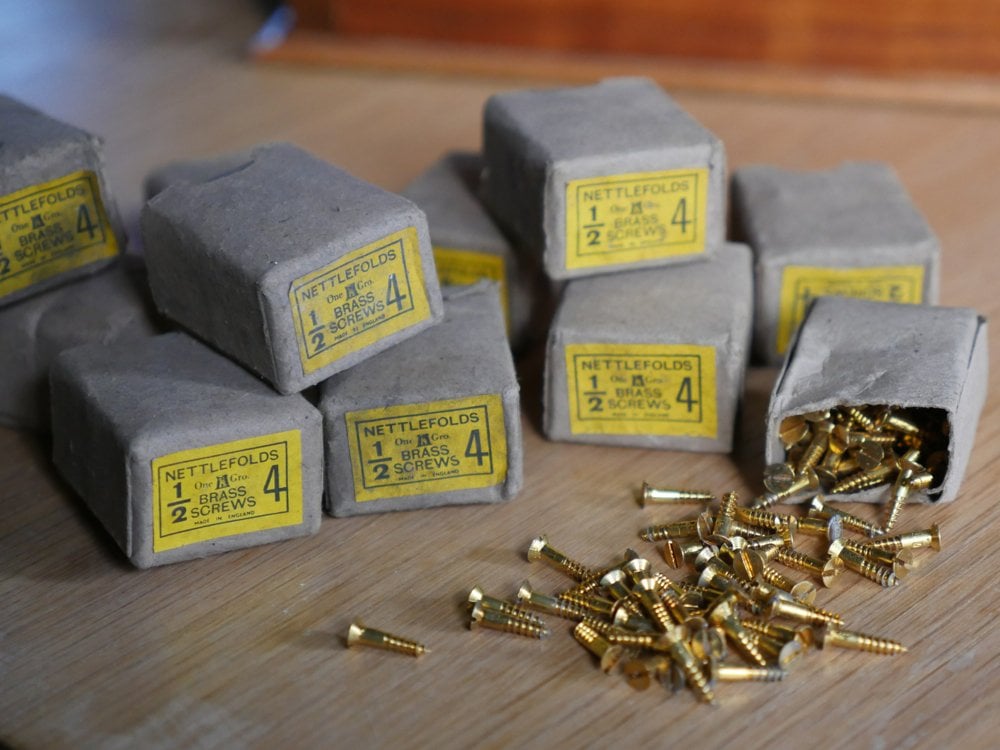 One thing I liked about living and working in the US was that most hardware stores have little bins with harder to find items like small screws, nuts, bolts, thumbscrews and so on in a range of materials ranging from brass to plastic and wood to mica. We don’t have that here and so locating them can be time consuming and costly. At least that became the case even before eBay came on the scene. An unusual sale of 10 boxes of new, old-stock Nettlefold 1/2”, #4 English-made brass screws fuelled my nostalgic juices for a better product and coupled with a genuine need for more stock. This gave me a saving of 75%. That’s a saving of a year’s searching and buying too. These are the things I find useful useful to me.

In my searching for a more economic knife to try out for spoon carving I came across this and another knife. This one costs £5 with free shipping and I am pretty certain that it will make a good knife. It’s not so much hammer forged but then most sold are not either. For someone trying out for the first time those available might be too prohibitive so I thought to find an alternative for starters that aren’t so highly priced but will work to get started with. 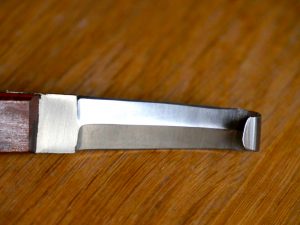 Something like the Aldi chisel syndrome snapped in my synapses when I thought, “Yes”, this might just work for those intent on fashioning spoons with knives. It’s actually well made with a hard and dense-grained wooden handle, brass rivets peened in and a well-shaped steel blade with cutting edges to both sides. My thinking on looking at the knife is that the blade could be reground along one edge for a single sided blade and buy a second knife for an opposite one or use this one as is as a push or pull knife. The wooden handle can be shaped to suit or left as it is quite comfortable already. First I want to sharpen the blade and test it out and then I want to see how it reshapes under the hammer.

EBay is not my favourite choice and neither is Amazon, but it’s become one of the best resources available to me in a world of ever-diminishing local stores. There are other aspects to eBay, even just to look for images alone. Look at this tool here. It’s called a tektool and it’s used for cutting narrow grooves that can be worked in push and pull direction according to grain orientation. It will cut deep grooves for recessing panels and also for string inlays on curved surfaces. Where might I look for such a tool do think? I bought this as soon as I saw it because I knew it would be good tool to own. 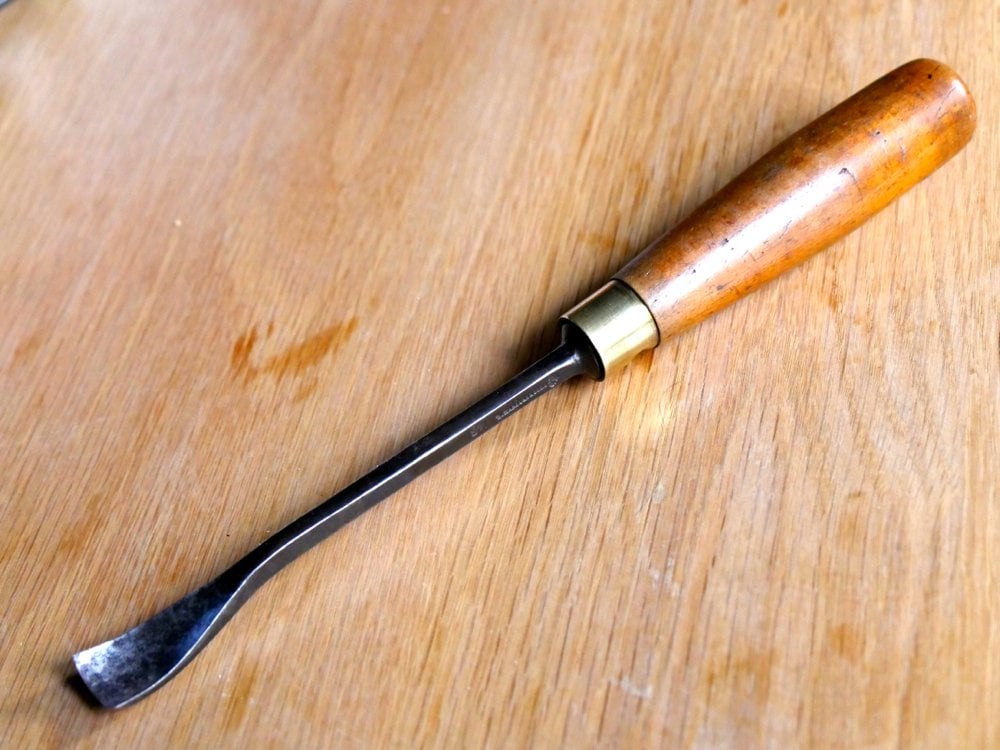 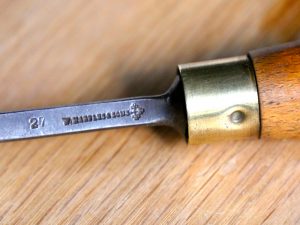 Bent spoon and bowl gouges are still being made and I still favour the German made Hirsch brand as some of the very best available. For deep work inside hollow coves ranging from leaf carvings to deep,deep ladles a straight gouge doesn’t always lend itself to the awkward scoops. So here again I was glad to find an old beauty even though new ones are not too expensive at around £40 for a lifetime tool. I paid more than I might normally, but £19 still isn’t much for a really fine tool like this one. 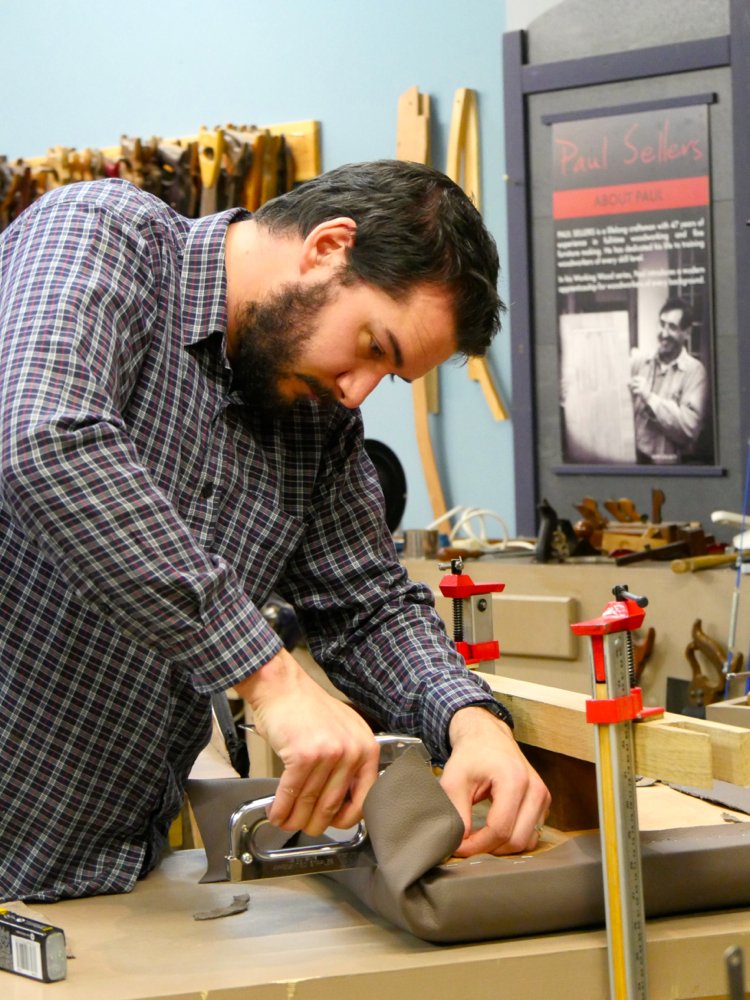 Phil and Hannah came in yesterday and worked on the rocking chair; to finish off the upholstery mostly. We have a couple yet to be finished when we find that couple of days spare soon I hope. 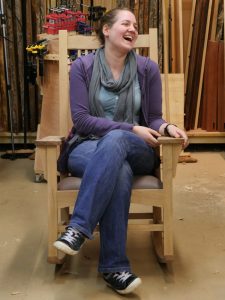 There is something quite awesome though about sitting in something you made with your own hands. I still feel it each time I do that. But you know what? It’s even more special when you see someone you trained make one and sit in it and smile. Icing on the cake!!! 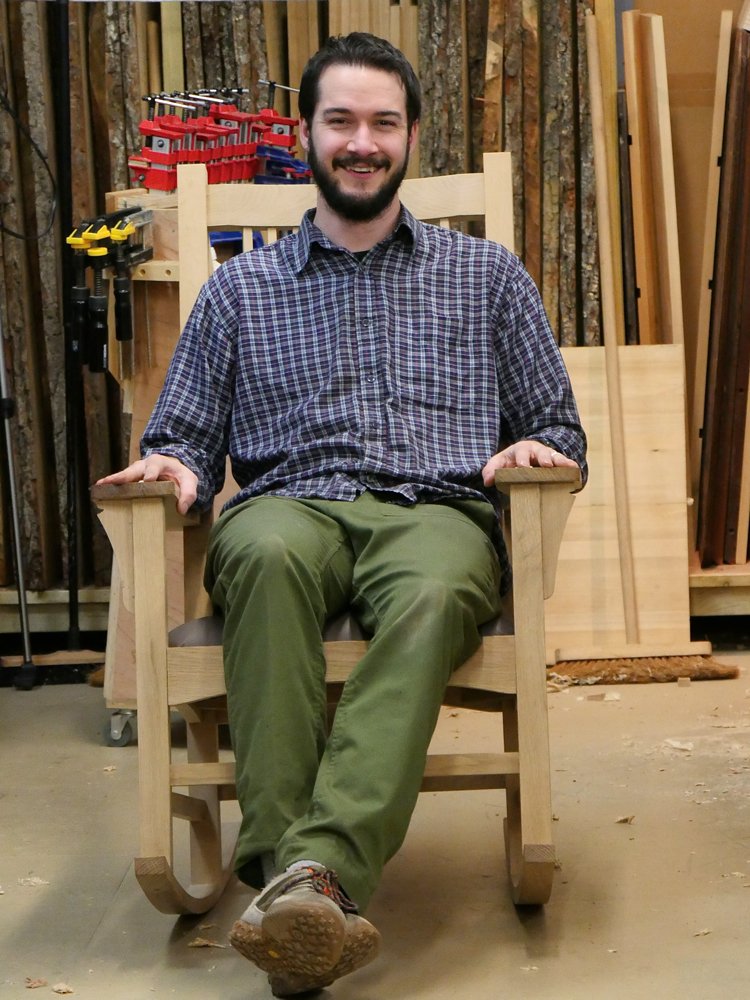 25 thoughts on “Another Busy Week in the Shop”