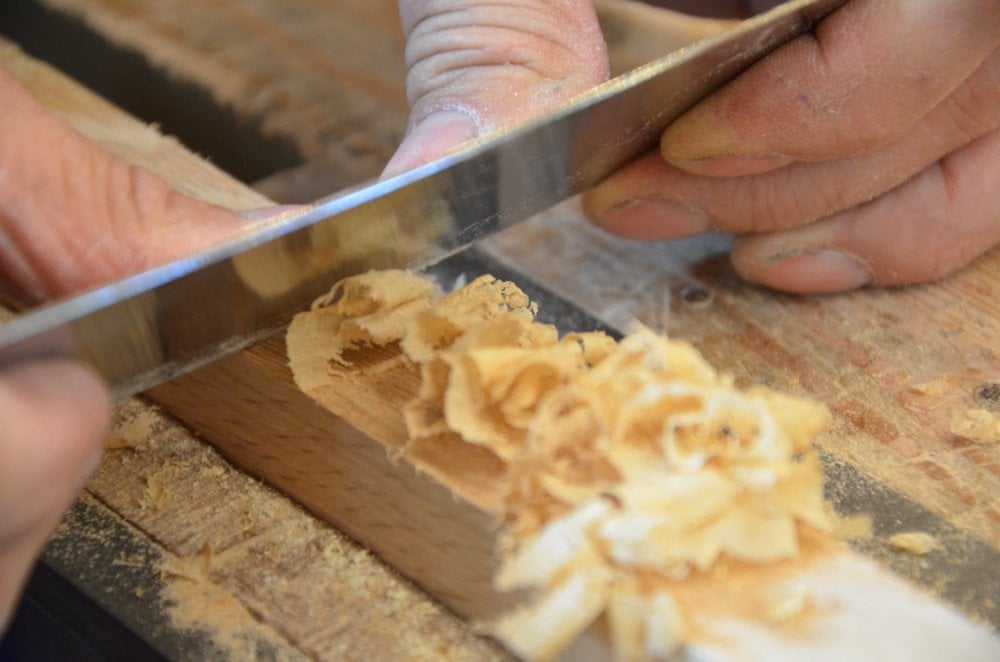 People often ask me to recommend a burnisher they can buy for forming the turned edge to a scraper. When I suggest just using the back of a chisel or a nail set they seem either unbelieving on the one hand or disappointed on the other. Most often they want a brand, a one-size-fits all and a dedicated-to-task tool. Fact is, until I moved to live in the USA, I never saw a dedicated burnisher for developing a scraper’s cutting edge and never knew such a thing existed. I thought everyone used the back of a chisel or gouge. That doesn’t mean they didn’t exist in the UK, just that I mixed in the wrong circles. 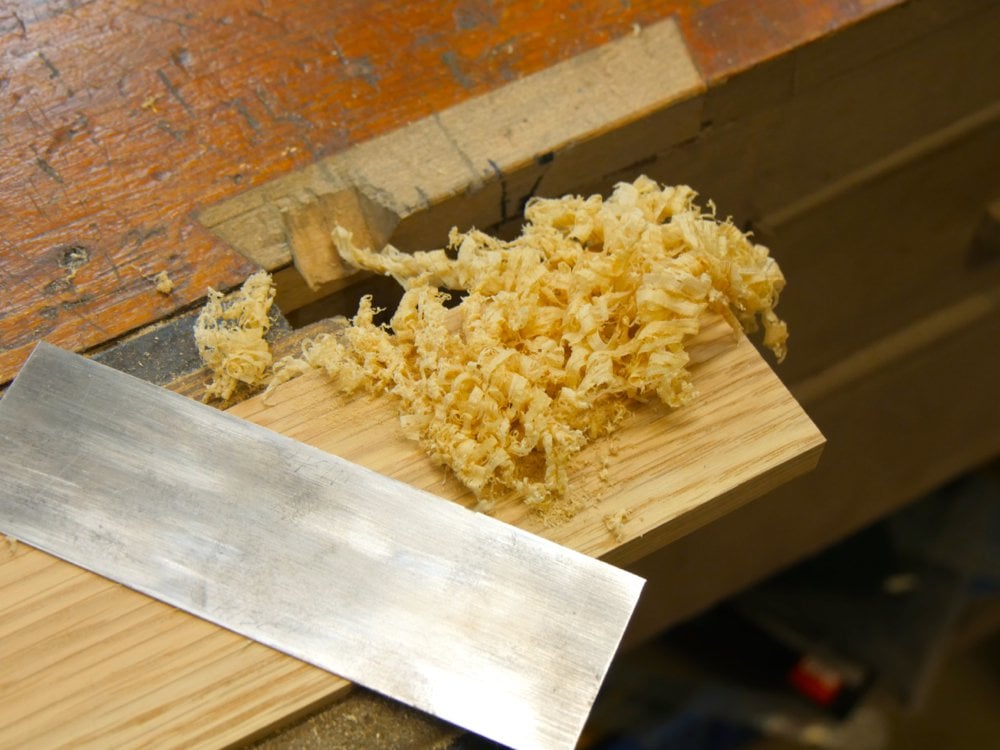 I remember when I first sharpened my first scraper. It wasn’t called a card scraper because that was an Americanism too. It was just called a scraper. The old man I was working with was in his 80’s and he pulled out a 1” gouge, stuck it in his mouth and whipped it along the scraper edges half a dozen times with quick successive strokes. Then he peeled off two dozen shavings a foot or so long and the job was done. On the next bench Merlin stopped mid stroke and picked up a 1/2” bevel-edged chisel, stuck it in his mouth in like manner and, using the back bevelled side of the chisel, also pulled up a half dozen strokes and started peeling off more oak shaving from his wood. To me this seemed like magic. 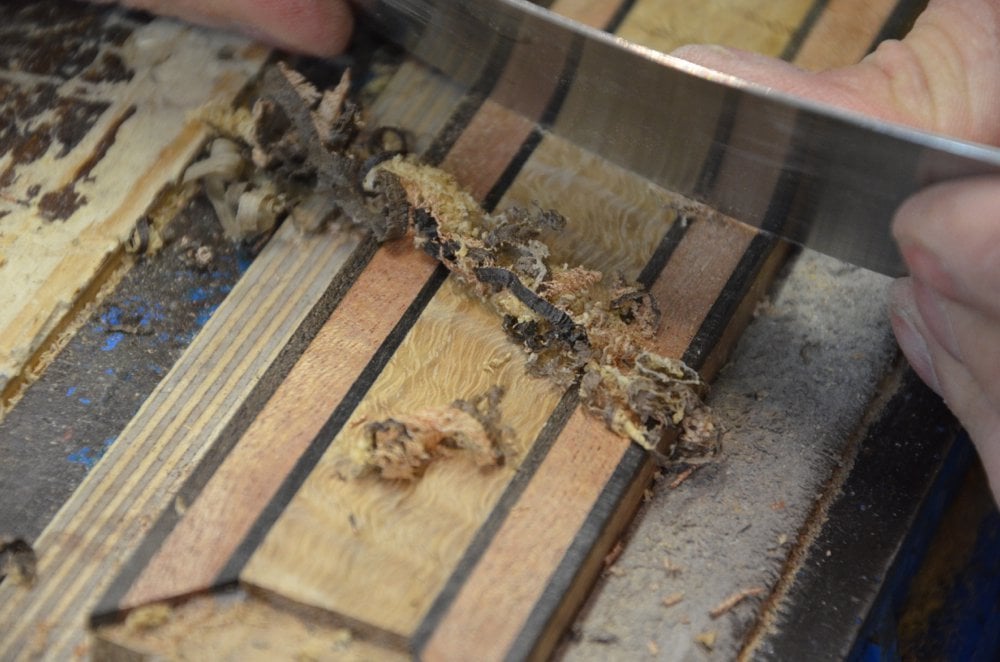 Torn grain fibres in pockets of unrest around crotch grain and knots suddenly yielded to the deliberate strokes each man made and what I thought to be irreconcilable damage left from the machine planers or hand planes was immediately transformed into a silky smoothness that felt, well, like glass. So it is with skill when experience is married with real working knowledge and a man after the war years had little money spare for his family needs. Those with low income and higher overhead made do with what they had. The men training me felt nothing about stripping out their carburettors and replacing or restoring worn out parts at the same bench they worked wood on. It was nothing to remove the car wheel, tyre (tire USA) and fix the flat in the yard outside the timber racks. There was something about these men that managed their work and finances without compromising or wasting. Their lives spoke to me in my formative years about doing the best you can with what you have. I learned many a good lesson from them. 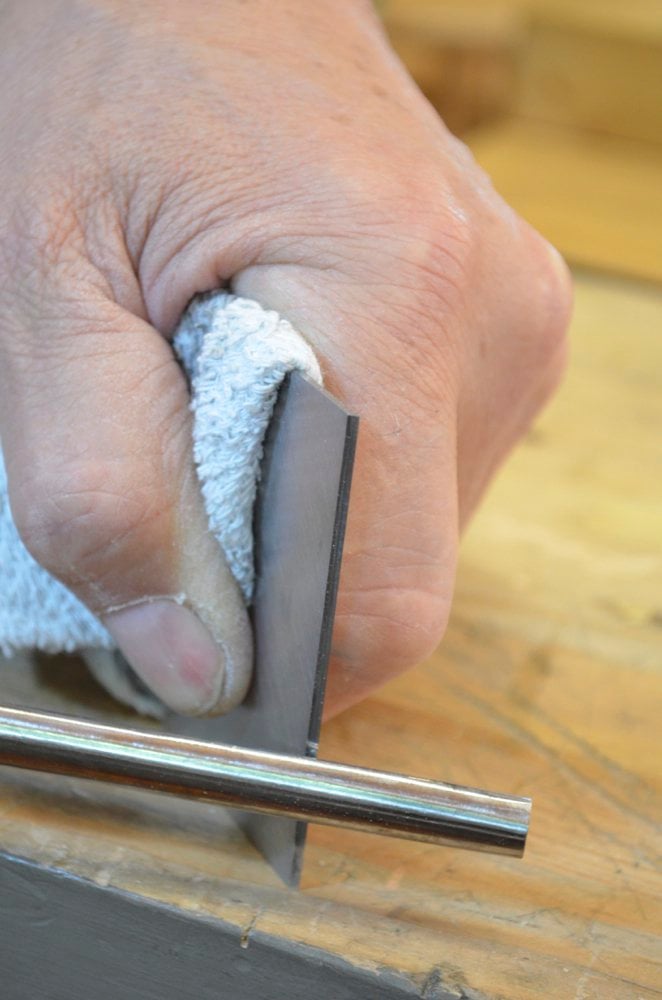 I never like the idea of people feeling they must have a special tools when there are often many options. So, you don’t need a custom made burnisher to consolidate the edge to a scraper and turn it to form the hook you need for scraping awkward grain. In reality, almost any steel edge works just fine. I agree there is nothing wrong with owning a special burnisher, I own several myself, but it wasn’t until I came to the US did I buy one. Before then and even today, I often reach for a bevel-edged chisel or the back of a gouge and get back to the work in hand. 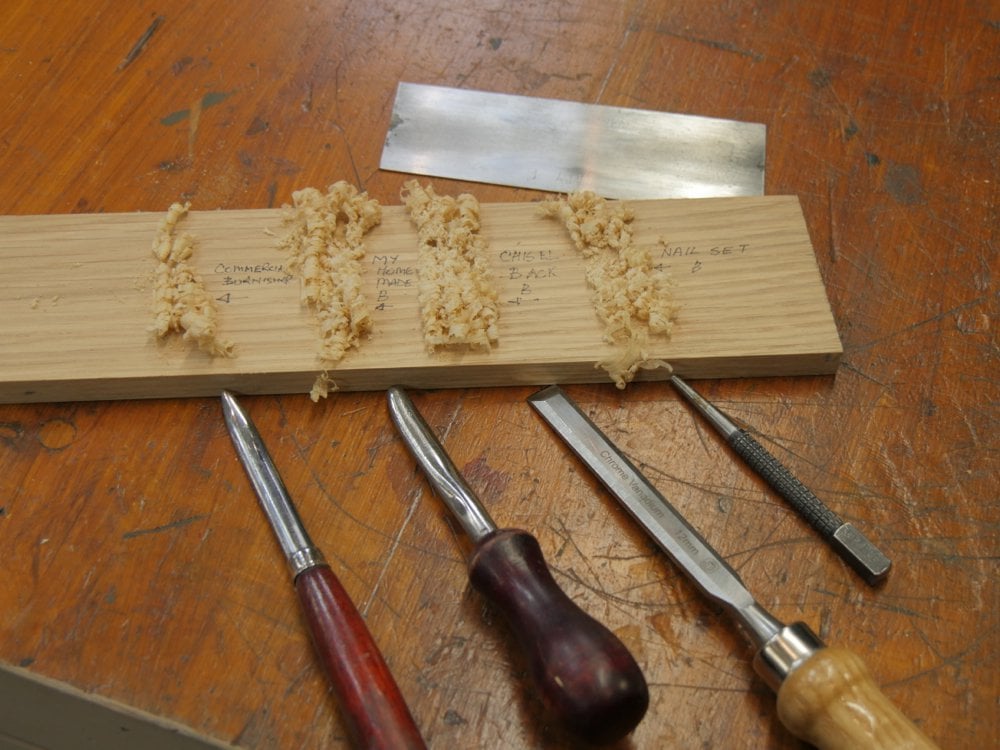 Last week I took four tools and sharpened for corners to a card scraper. The results were the same, as far as I could tell anyway. All four ‘burnishers’ worked just fine. In a matter of seconds I consolidated the steel and turned four new and keen edges. I used my own home made burnisher made from some O1, 3/8″ steel round, a manufactured burnisher, a nail punch and bevel-edged chisel. They each produced a viable cutting edge quickly and easily. And actually, no one feels any better in the process than the other. 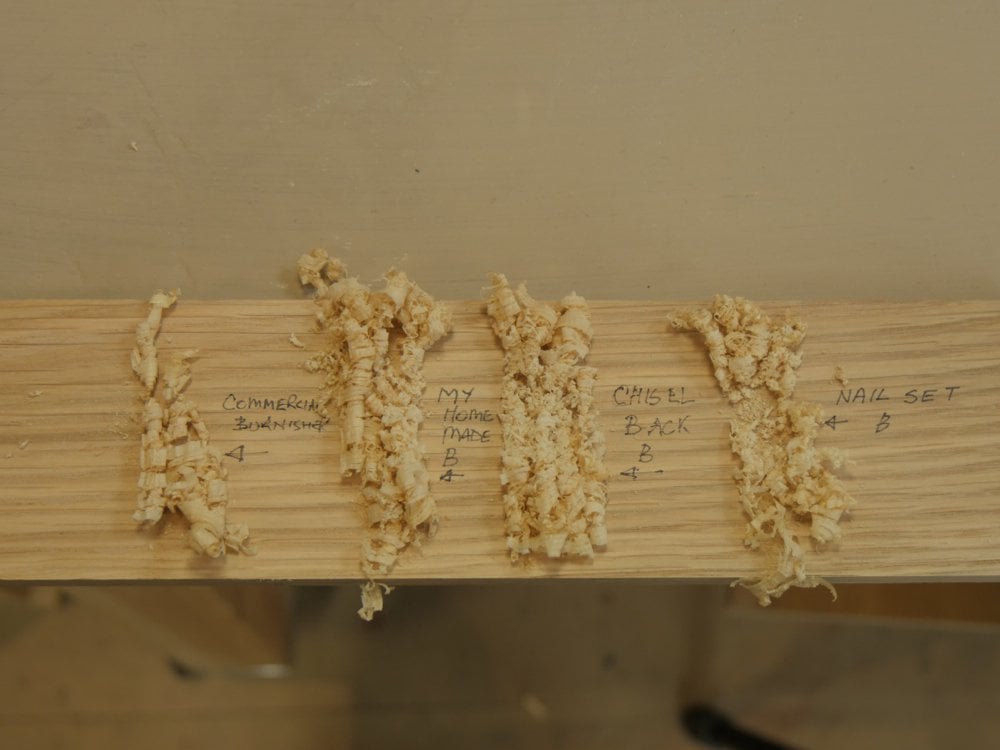 I would say one thing with regards to safe handling. My chisels and gouges are usually surgically sharp, so I would suggest keeping a spare chisel or gouge for sharpening a burnisher at an unrefined level of sharpness. 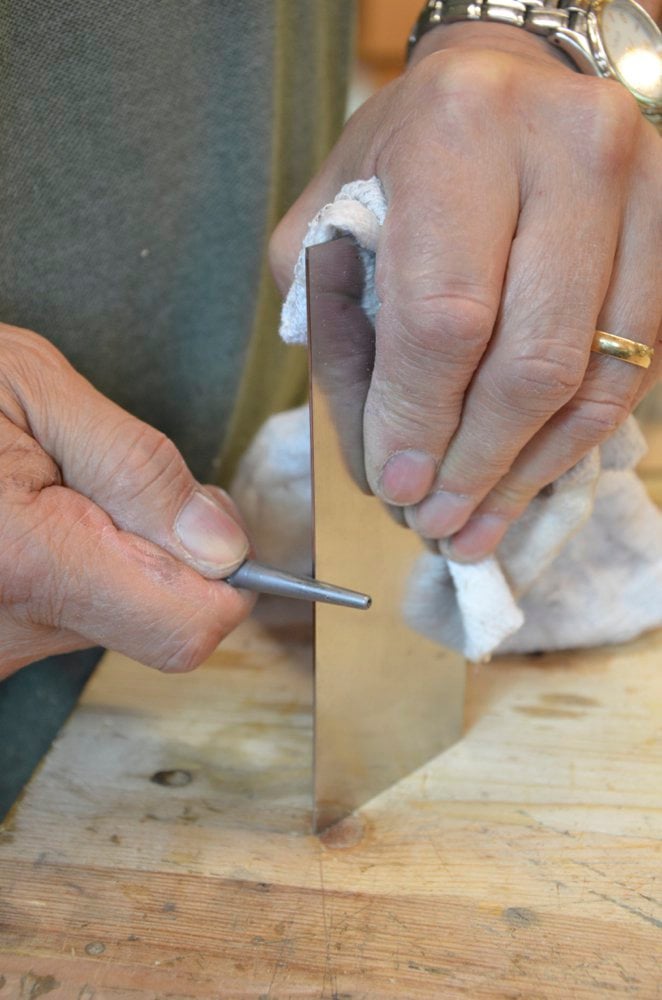 The nail punch (set USA) or centre punch has no sharp edges and works fine as does a 10mm (3/8”) twist drill, the safe edge of a file. 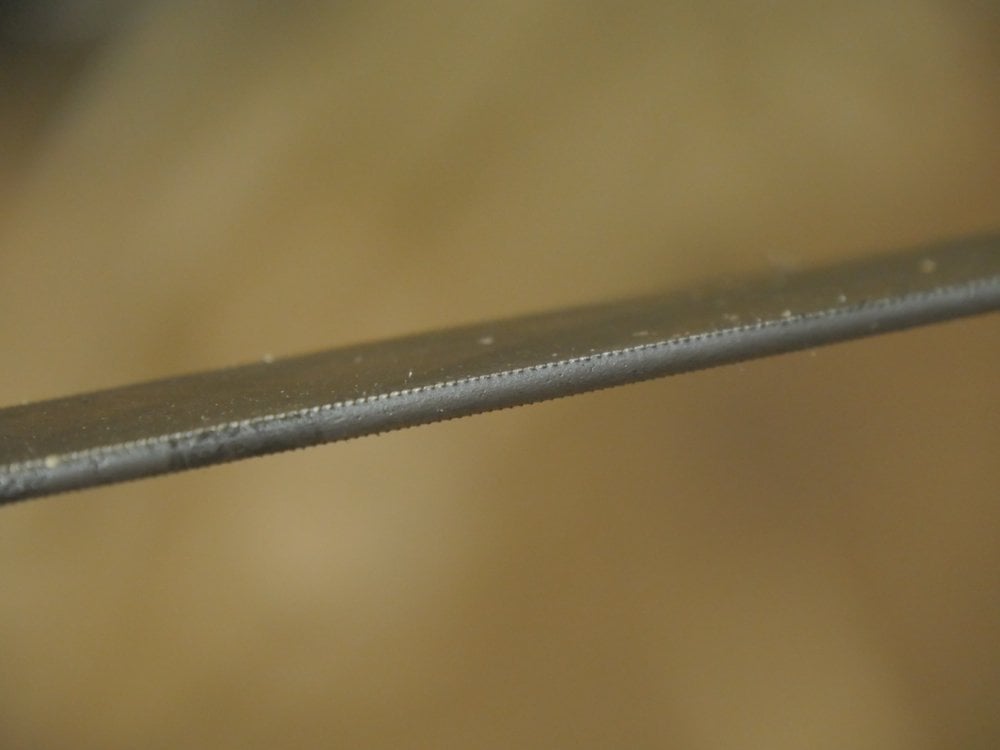 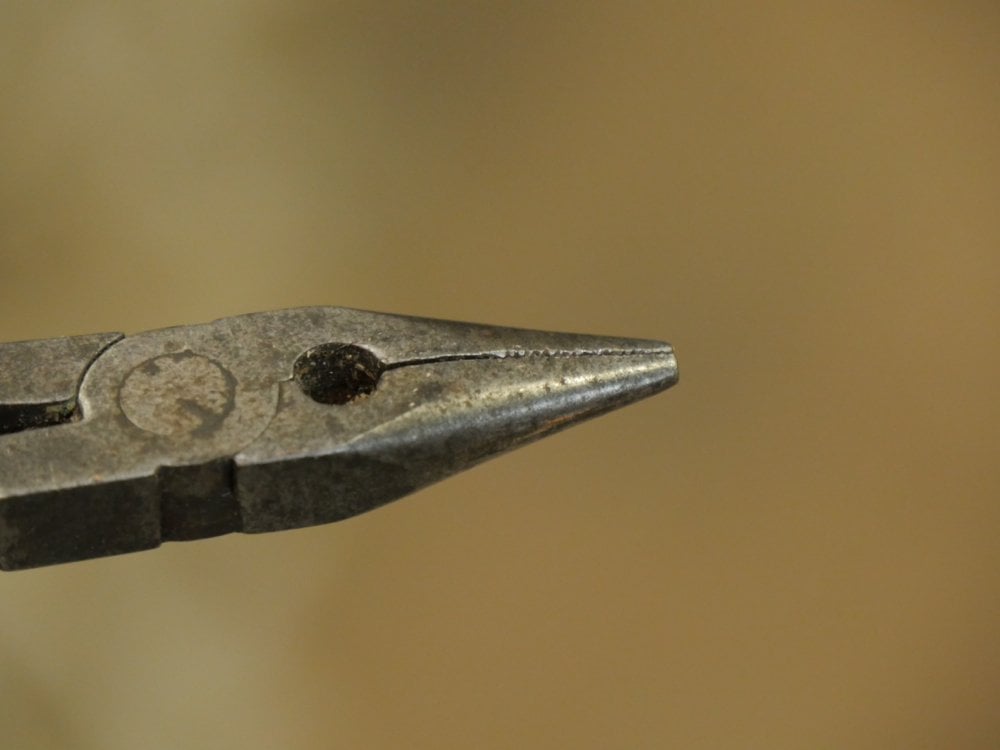 The nose of a pair of needle-nose pliers, screwdriver blade and a dozen more different tool types. 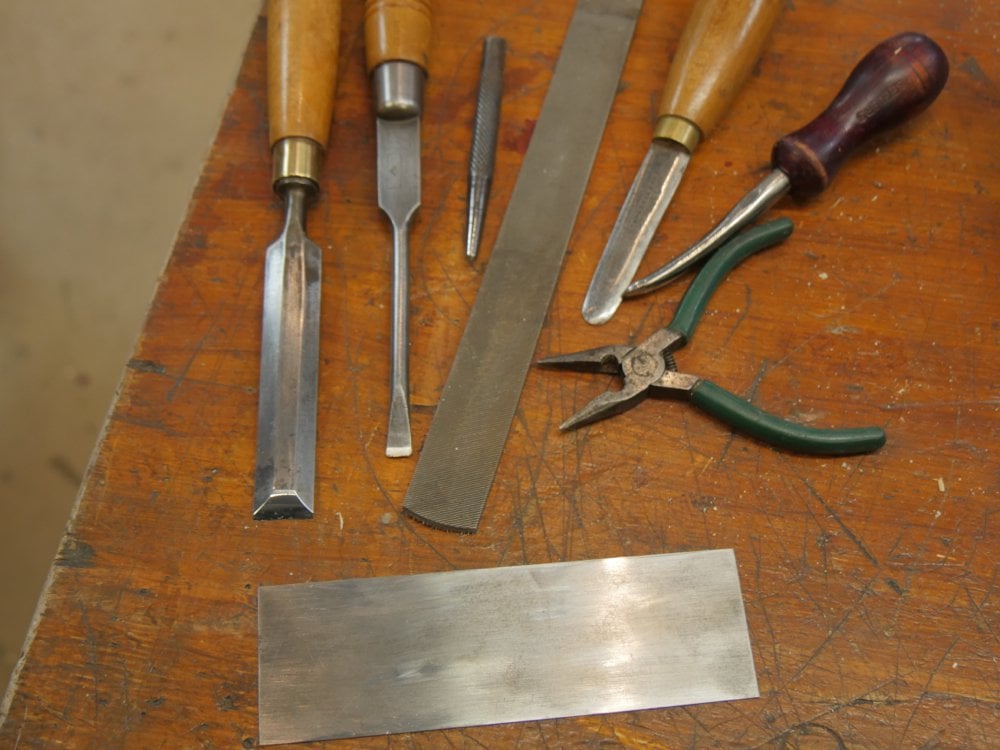 26 thoughts on “Scraper Burnishers That Work”