As far as long planes go 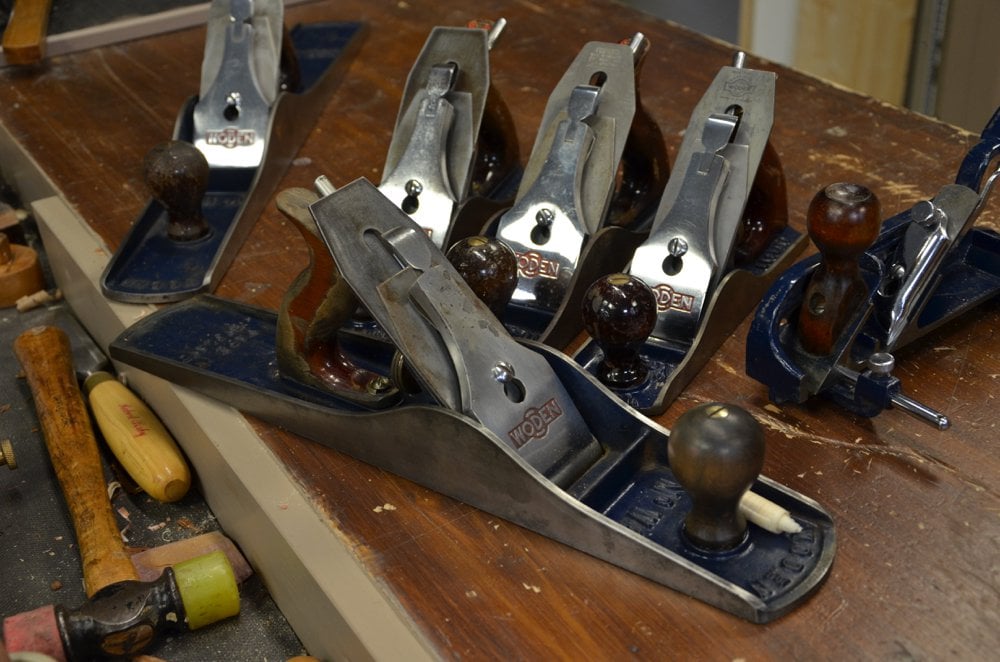 The longest plane I use is a #6, bevel-down Bailey-pattern plane, even though I own full ranges of bench planes in wood and metal types and by different makers, new and old. For the main part they don’t get used past the #6. So, occasionally, about once a year, and for no good reason really, other than I like it to feel wanted, I use a #6. This is for definite the longest plane I ever use. If, if, I were to use a longer plane I would most likely pick a wooden bodied plane rather than a metal-bodied one and if I were planing for thicknessing, say some tabletop boards, as I am here, I would rarely use anything longer than a jack plane. It’s not an age thing, nor a muscle thing but a sensing thing. I know a wooden plane takes about one third the effort a metal one takes and so I would tend yo use a longer wooden one because they do remove stock much much more easily and, though perhaps as heavy their metal counterparts they move much more lightly and swiftly over the wood, even with a heavy set. Because I am basically training new woodworkers I tend to use what they can get hold of at a reasonable price and encourage them to find older planes and tools to restore because this speeds up what they must best understand to be true to their chosen craft. There is no better way to understand a plane than to take it apart and restore and sharpen it from a flawed condition. Also, in my view, there is no point paying top dollar to avoid what they must face in just a few hours after purchasing what are expensive tools. New planes need restoration work and set up and often even straight from the box. That was standard when I was a boy buying new tools. Today many makers put effort into getting the planes set up, but in transit things move through vibration. That’s a fact. 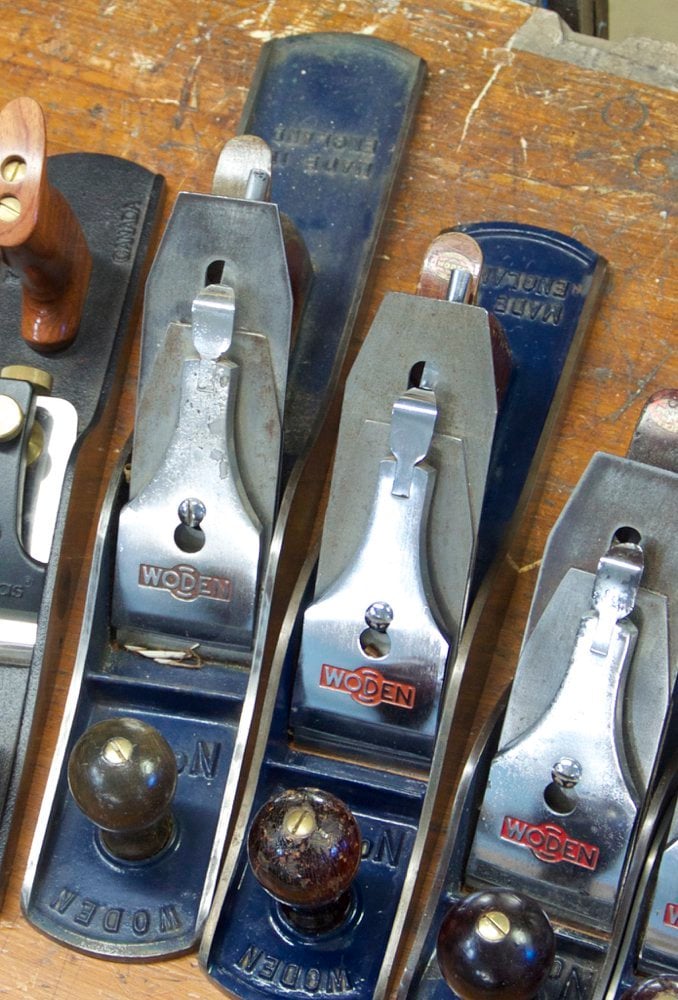 I could never steer someone towards #7 or 8 plane that here in the UK would cost $630 for a high-end US model and $500 for a high-end UK model. If I haven’t used one but six times in fifty years of daily at-the-bench woodworking for a living how can I possibly suggest someone new to woodworking should buy one? Certainly I would never use a bevel-up or low-angle jack for this work even though I own some and like them for certain work. 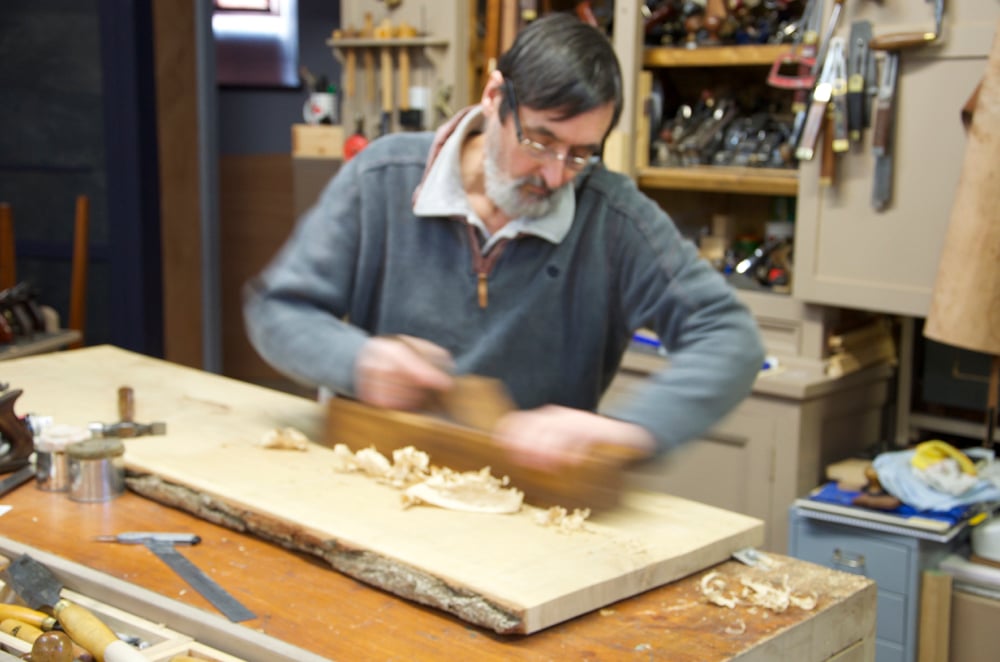 I think craft work in woodworking is very different today than it was for me starting out. Woodworking for me was never a hobby or pastime because paid or not I always took working seriously no matter what I did. I think most woodworkers I know as amateurs are indeed some of the most serious woodworkers I know. They are also some of the best, the most contentious and the most sharingly hospitable. Many professionals fit into the category of amateur woodworkers with this as the definition. Most types of woodworking has become of greater interest to amatuer woodworkers who are generally as proficient with hand work (if not more) than many if not most so called professionals; proportionally that is. And amateur woodworkers outnumber professionals by many hundreds to one. Tool makers and sales outlets indeed target amateur woodworkers more than professionals but they also give tools to professionals to get them to use them if they are public figures. We stopped accepting tools three or four years ago because we felt it would compromise our work testing tools and giving our findings here. 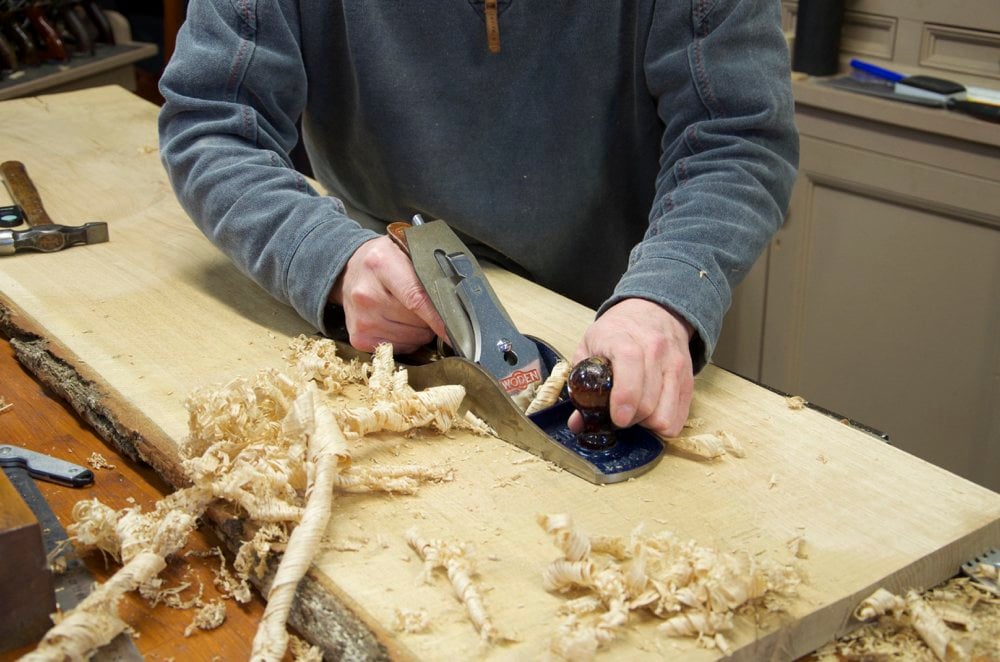 Two or more camps in woodworking

I see that today there are two main woodworking camps and there is nothing wrong with either. On the one hand you have people like myself, craftsmen who worked most if not all their working life making their living from custom-built furniture making and working primarily with hand tools. I, like others, pick up tools where I can, when I can if I like the look of them and usually will only haggle for the right price if I feel the price is too high. I don’t waste money on buying planes because they look pretty or even well made but I do like seeing nice planes from time to time and see nothing wrong with people who like to do that. And it’s here you meet other people who have a different perspective. These are the people who admire good looking planes and can simply enjoy the collecting of them by buying them outright from makers, engineers mostly, that make very admirable planes and tools. Now both categories of planes work; that’s the seek-and-find type where you buy what you can afford secondhand, and then the higher-dollar so called premium ones brand new that usually but not always work straight from the box. This alone adds appeal and especially to new users. It postpones the learning curve as I said, and most of the people I have trained are often glad to have got stuck into learning how to sharpen and adjust their planes straight from the beginning because within an hour or so of use they’ve usually got it. 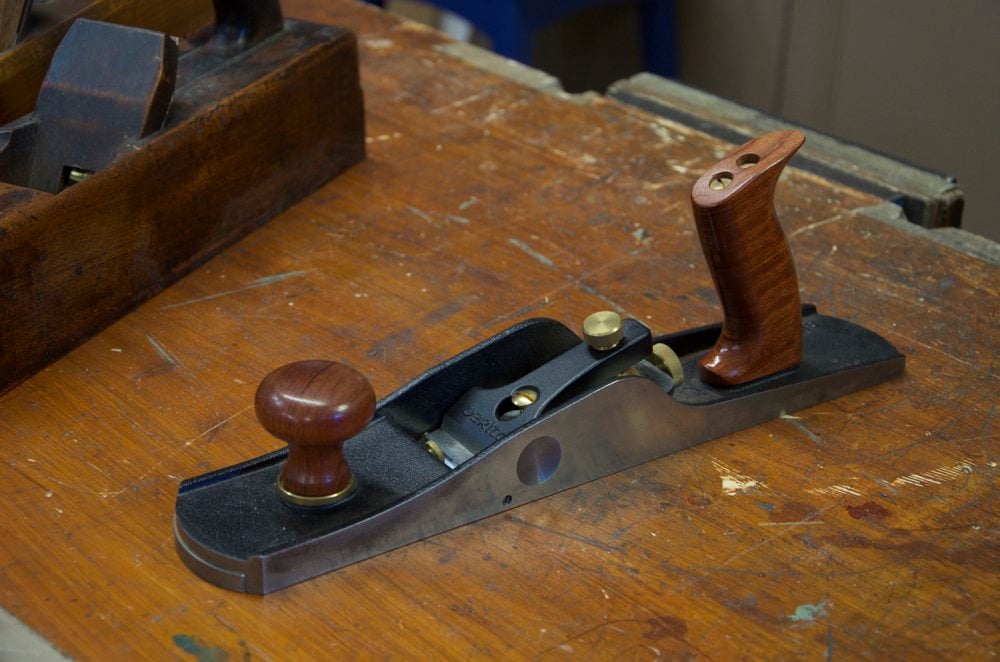 So this becomes a personal choice and I think a personal-preference issue because most old planes that have no particular collector value and no really redeeming qualities apart from working well can do everything a new plane will do and dare I say even more sometimes. You will read in some of the comments that you need fine planes to create fine work and I feel that that’s true. But, really, what you actually need is perhaps any well-known maker type that’s well-tuned and sharp to create fine work. 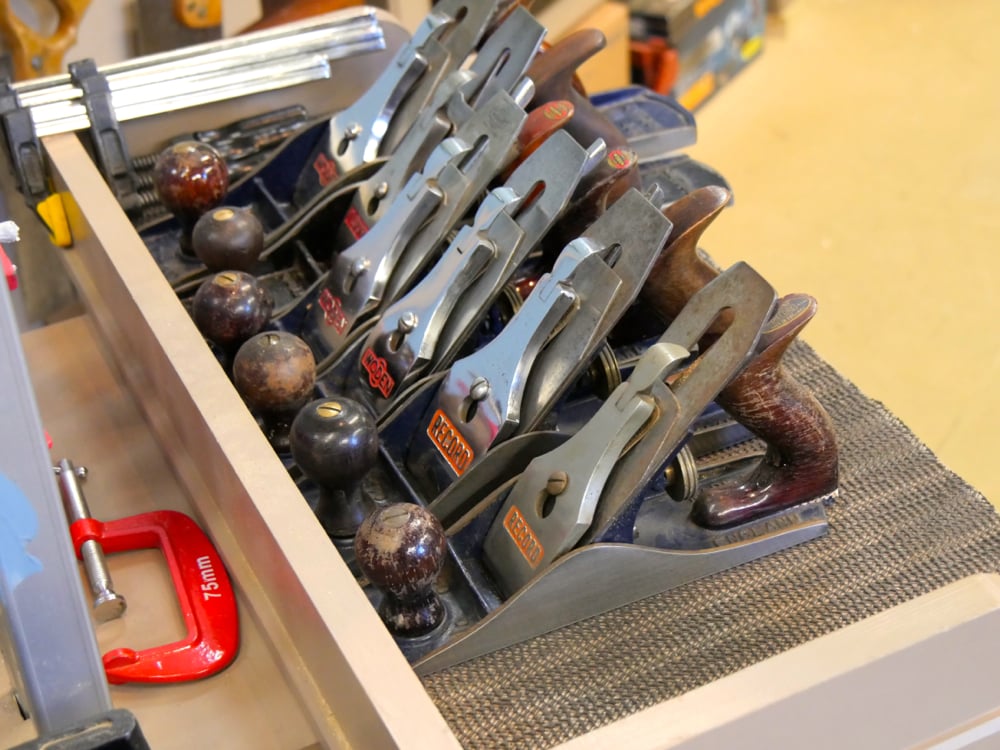 Not really high-end at all. These include just about any older Stanley and Record planes say pre 1960’s depending on the makers. In terms of purchasing bench planes in the bench plane category my recommended list goes as follows:

#4 Bailey-pattern Smoothing plane by Stanley, Woden or Record pre-1970’s and you can include Clifton, Lie Nielsen and Veritas if you want to pay more and own a heavy or new plane.

#5 Bailey-pattern Jack plane by Stanley, Woden or Record pre-1970’s and you can include Clifton, Lie Nielsen and Veritas if you want to pay more and own a heavy or new plane.

#4 1/2 Bailey-pattern Smoothing plane Stanley, Woden or Record pre-1970’s and you can include Clifton, Lie Nielsen and Veritas if you want to pay more and own a heavy or new plane.

#5 1/2 Bailey-pattern Smoothing plane Stanley, Woden or Record pre-1970’s and you can include Clifton, Lie Nielsen and Veritas if you want to pay more and own a heavy or new plane.

#3 Bailey-pattern Smoothing plane by Stanley, Woden or Record pre-1970’s and you can include Clifton, Lie Nielsen and Veritas if you want to pay more and own a heavy or new plane.

Followed then by a non bench plane plane: 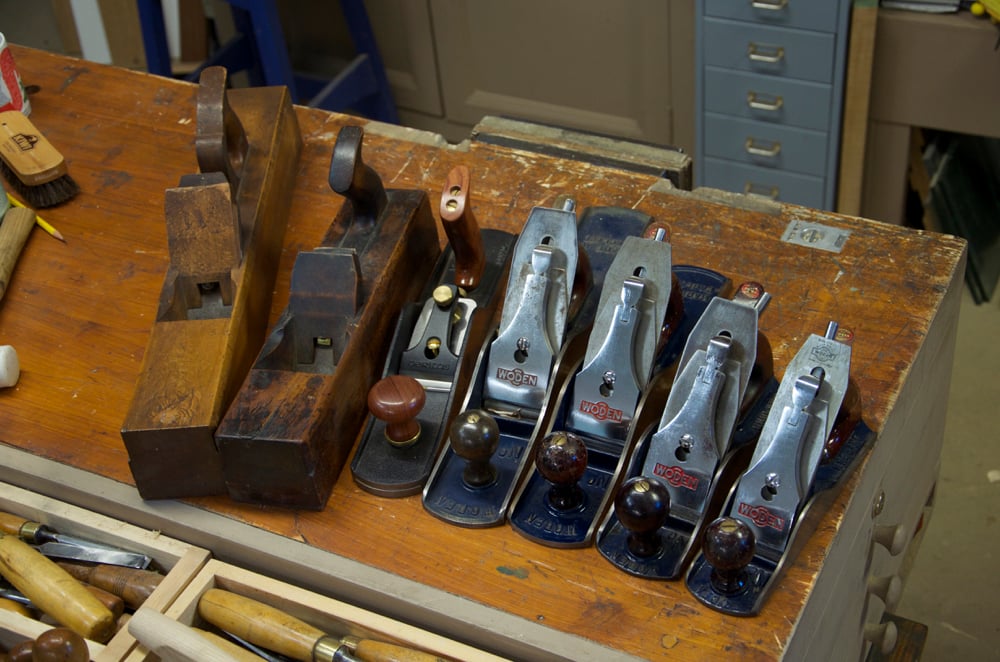 Bevel-up planes are nice to own, and it’s here I will give the same answer I gave to the other couple of emails I got this week if that’s OK. Personally I find these planes are quite limited in bench work, to the point that for the most part they are not what I might call essential planes. Some espouse the advantage of having different blades or being able to change the bevel angle for different tasks according to grain. I find that establishing techniques works much more effectively for dealing with awkward grains than changing bevels or irons. I haven’t found any difficult grain I couldn’t deal with using a regular bench plane, a scraper or two and then a couple of other tricks too. You only get technique by working in the field so to speak. You can get great results with a#3, 4, 4 1/2, 5 and a 5 1/2 for smoothing and jack plane work such as surface planing and edge jointing. Perfect in fact. That said, I do like bevel-up jack planes for some limited work. Length of wood makes almost no difference so all the theories I’ve seen over the years haven’t really held water for me. When they go wrong though it’s often too late, it’s often when you least expect it and it’s often in places you least want it to happen. 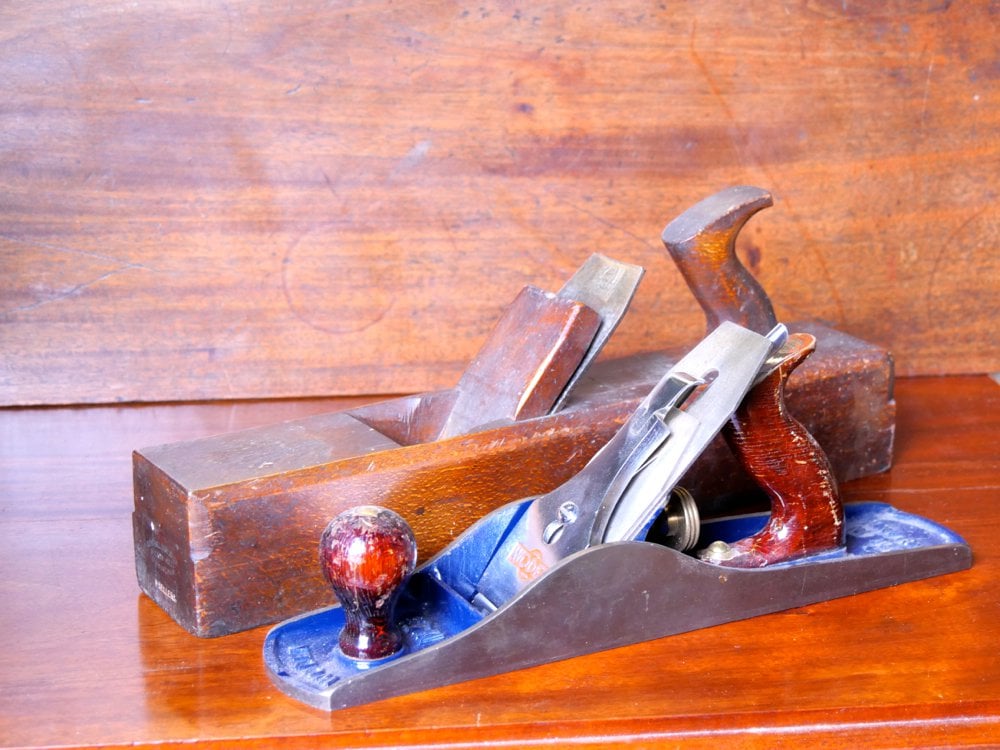 In such cases the bevel-down planes will often but not always repair the deep rooted damage that quite regularly occurs as torn surface grain. Remember too that for those of us not selling or engineering planes but using them in the day to day of life use wood not at all designated to give perfect results at sales venues. 75% of the time wood responds adversely at the cutting edge and salesmen give the impression that their planes plane anything and everything thrown at them. They demo with hard maple and state they are indeed planing “hard maple”, which is a wonderful wood to plane with great results almost every time. 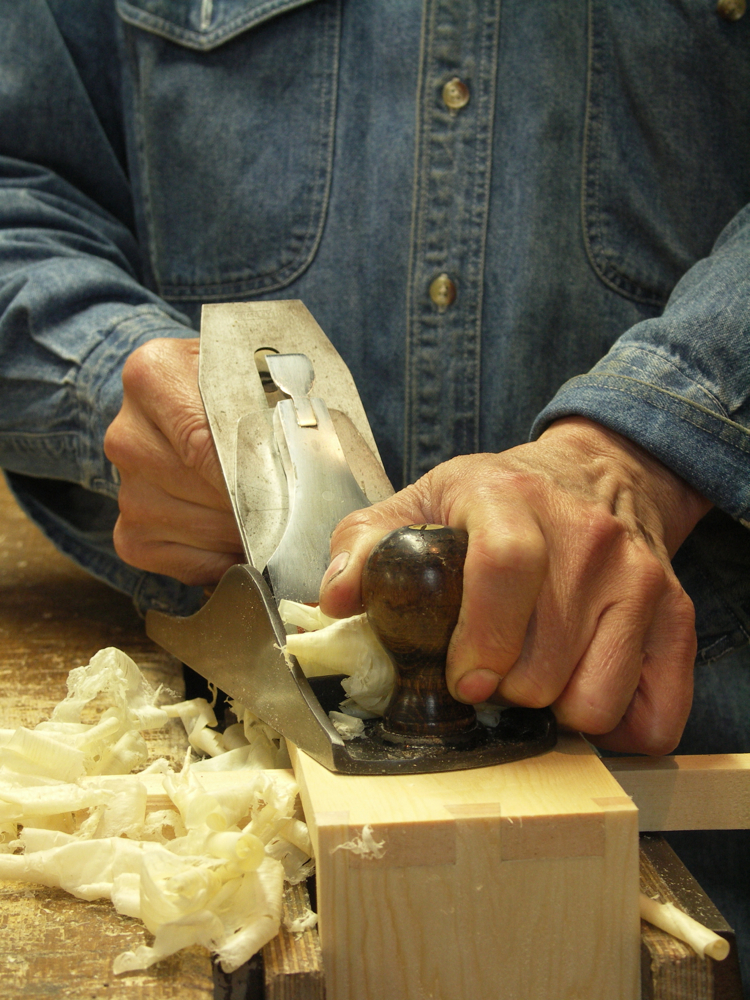 They use curly maple to show the planes work even on wild grain, but curly maple generally planes quite well and often wonderfully too. This is especially true if you spend half an hour tweaking and fine tuning the plane ready for the show. Do the same with your more ordinary planes and you will get parallel results, even using thin irons and no retrofits. You see, at the bench, life’s really quite different. I say all of this to add some balance to those searching for the reality at the working end of the plane and at the bench in daily life.