An email from a friend struck me recently and I responded by calling the number he gave me. “Tools for sale”, are the three words that struck me in the email, and then, “violin maker,” too. The tools were a mile from where I live and a few hours later I was sifting through box after box of a man’s life to in my own way try to piece together how a man had worked and what he’d work with and on there in this brick-built garage. The shavings in the throats of thumb planes and the mass of bridges and ebony fingerboards told me his work was generally repair, but then too a box full of uncut, maple neck blanks, another of uncut spruce bellies and yet another of maple or sycamore backs told me of his aspirations as a maker of instruments as well. 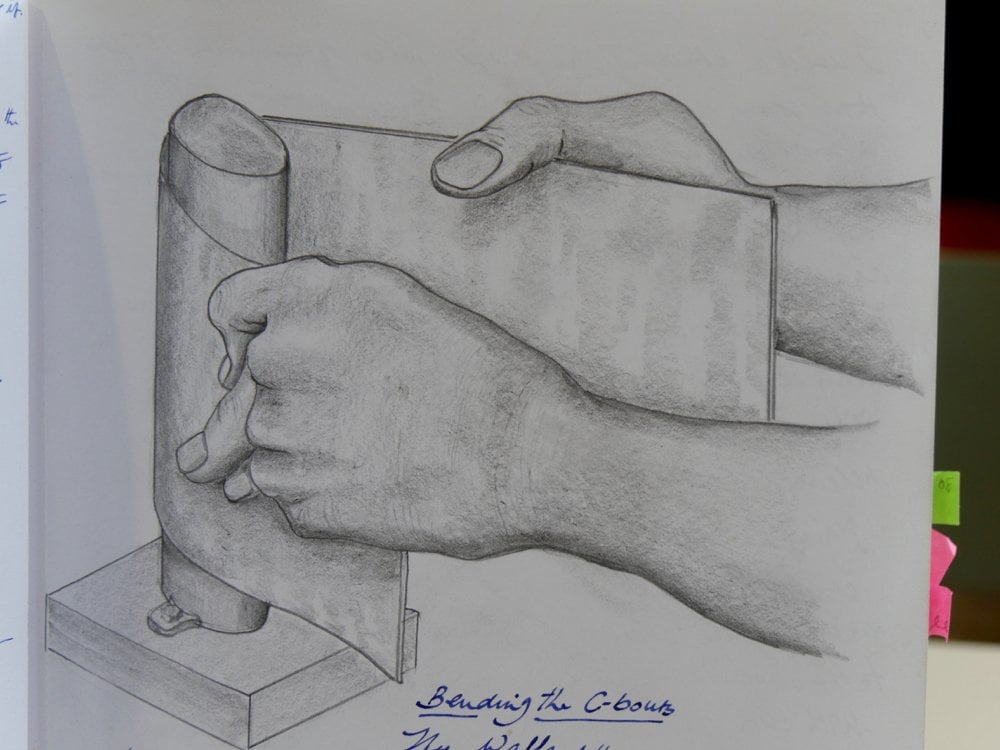 Generally the man was a maker of things and the tools were those mostly of a man who liked to make things from real wood. In no way was he a mass maker of anything and all the tools were as sharp as mine. Yes, he was a violin maker, but then some of the other tools were tools you might not find in violin making. Is violin making woodworking or instrument making? Are they one and the same or uniquely different? These are common enough questions and for me it’s simple. Any woodworker who understands wood could most likely make any of the bowed instruments. It’s the same with guitars and banjos, mandolins and so on. What elevates the instrument maker into higher realms of finer woodworking is his non acceptance of anything less than perfect when it comes to clarity and projection from the ‘voice’ of the instrument. This is the man who searches the very fibre of the wood for tones I might not understand or respond to. 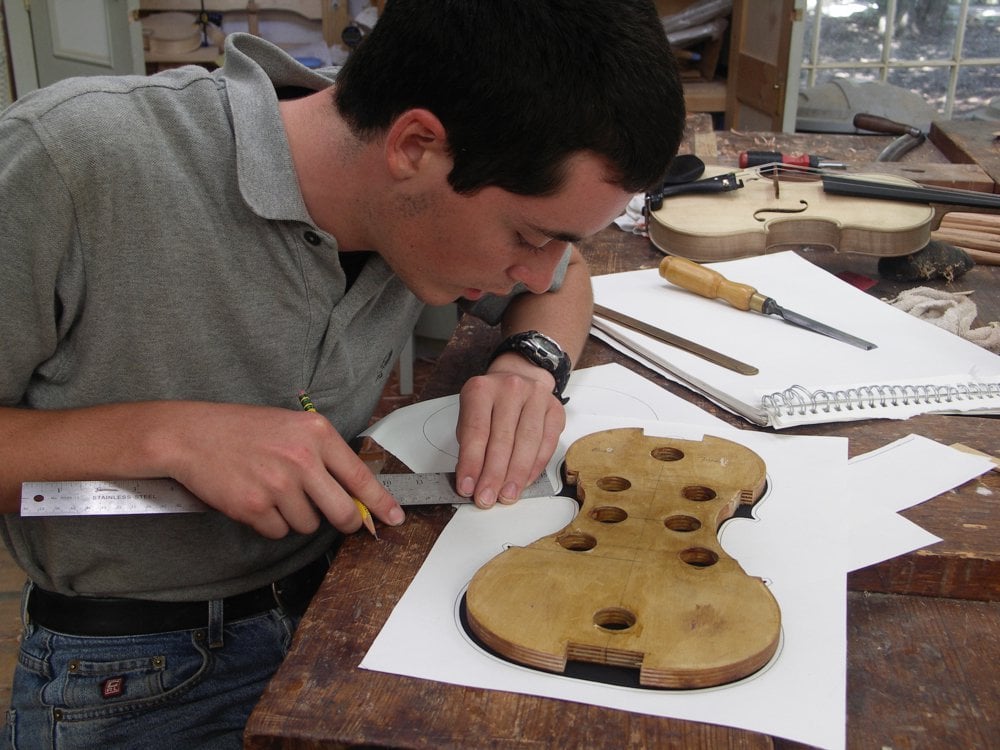 It’s this that makes him what he is and it’s this then that earns him the title of violin maker or musical instrument maker. Though people may not always understand what they feel when the see and/or hear a truly fine violin, they can sense the work of someone dedicated, experience and gifted. There is no doubt that there is a difference between a woodworker and an instrument maker. This man had no layout tools in his tools. Well, just a combination square and a marking gauge. The square, a Rabone Chesterman, was well used enough. The gauge seemed old but unused. What there were were lots of carving gouges and chisels and knives. 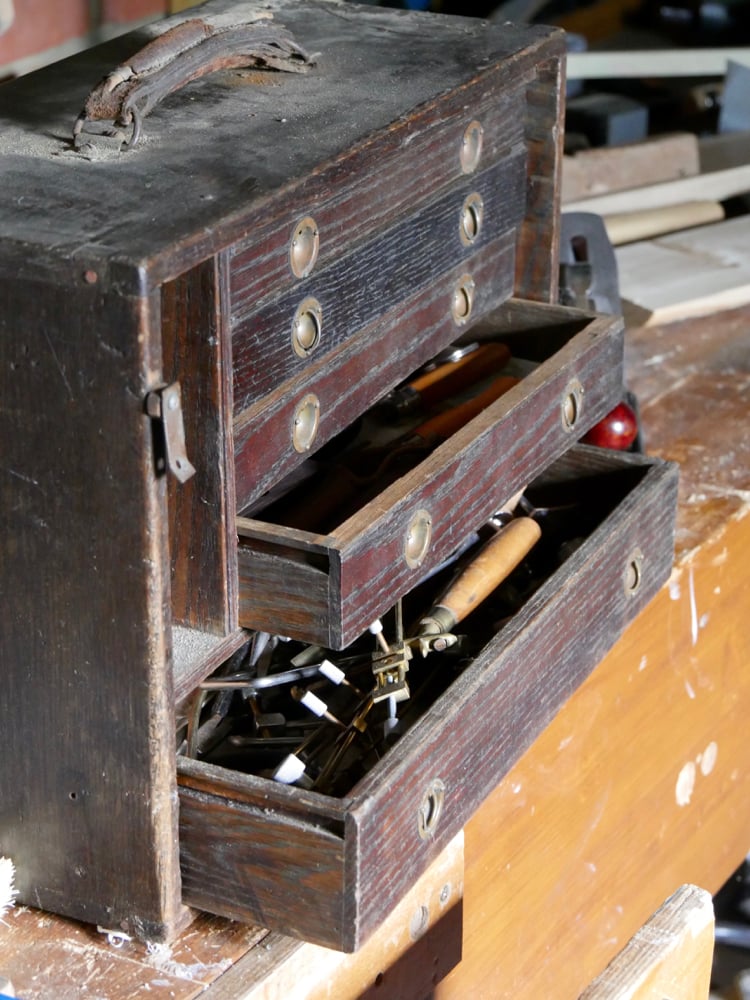 There were purfling cutters, a sound post setter, bridge holders and then an electric glue pot and a non electric one in cast iron, an electric bending form for shaping the bouts and much more. My trailer is 18″ deep, 4′ wide and 6′ long The inside of my car with the rear seats down roughly about the same size. Both were filled with tools and woodworking equipment. I became quite rich from my find and paid a fair price for the tools and equipment. 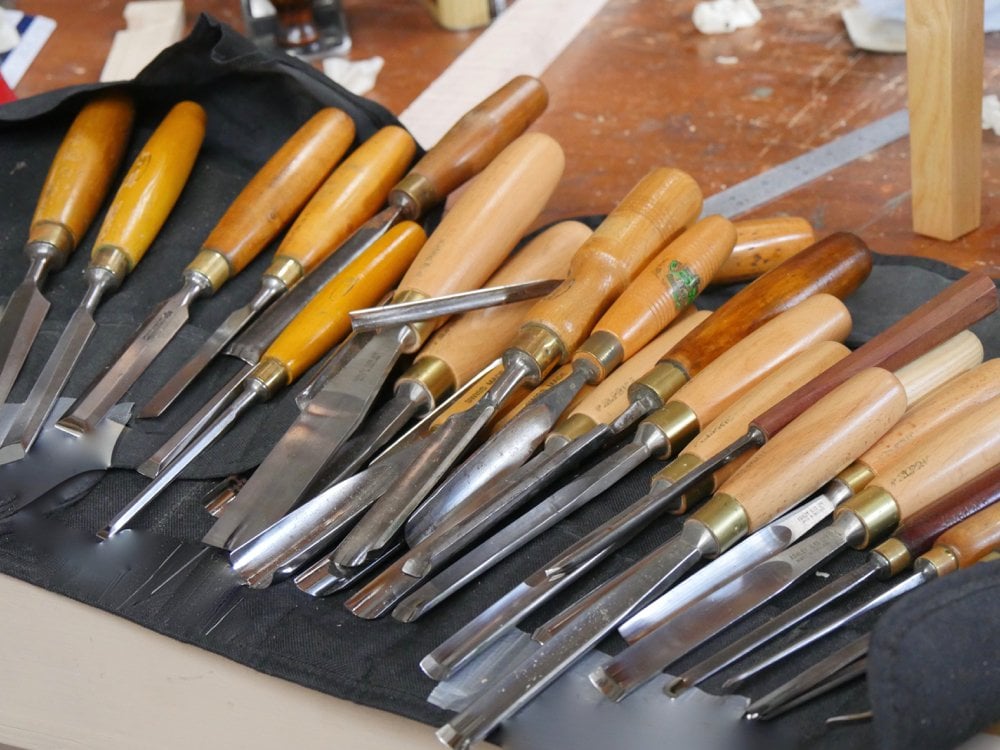 I was glad to have discovered these treasures once owned by another working man like me. The person selling the tools was helping the widow of the man that owned them. “The people that came wanted them for nothing,” the lady cried. “They offered me so little. Just wolves really. All I wanted was a fair price and to see the tools go to a good home where they would be used.” I don’t buy tools to sell on but to use. The tools I bought will indeed be used by family and friends and then students too. This makes me content. Restoration begins soon and I will enjoy using them to teach others the sharpening craft.