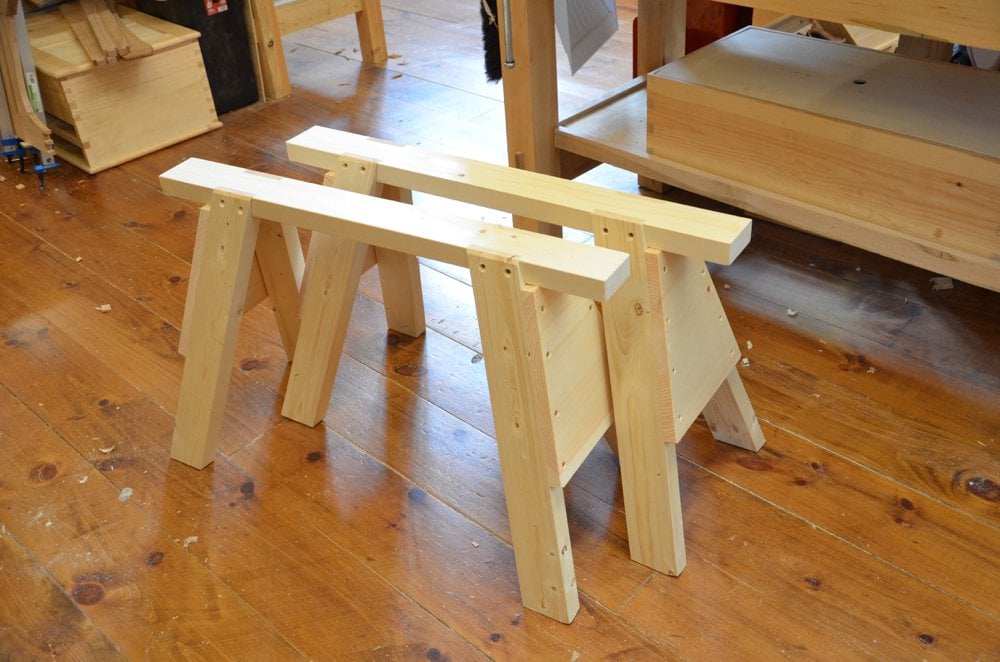 I’ve been working for years now to preserve the many things I took for granted as a boy. it started with taking in apprentices in the late 80s, which I still do and then holding classes for kids in the evenings and weekend through the 90s and on into the new millennia. I also taught a few thousand through hands-on foundational and intermediate coursers for furniture making too. 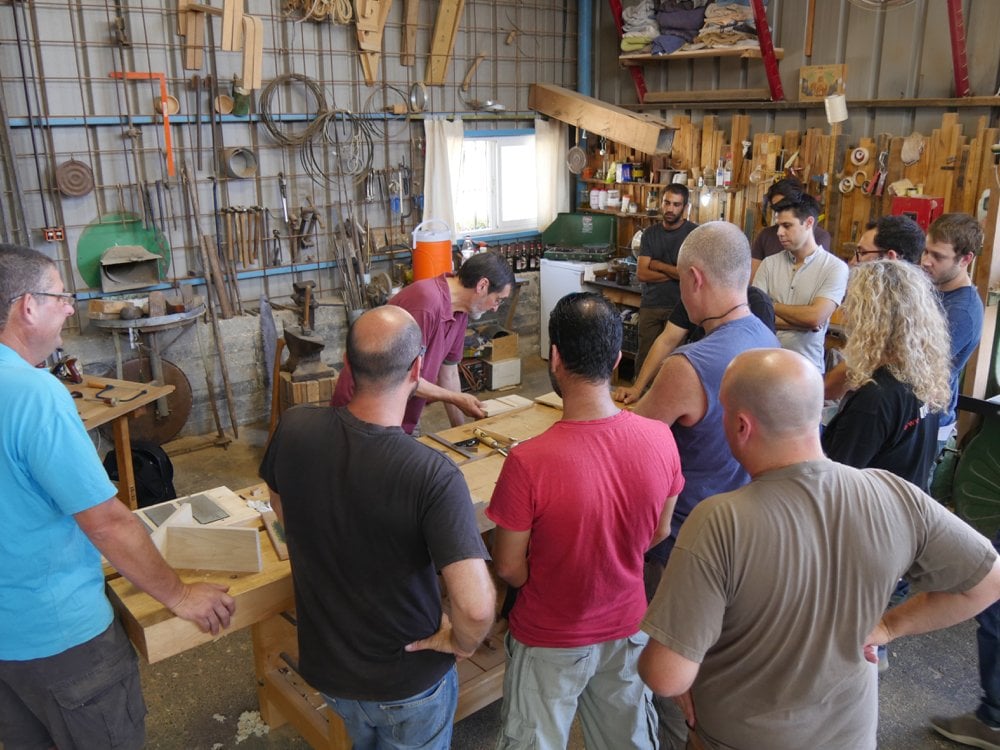 I have said it before and I will say it here again because it is worth saying. The best way to preserve a seed is not in a glass jar in a dim and dark cellar but in the planting of it in fertile soil and then the watering of it to make sure it has access to all it needs to thrive. By writing down all that I have come to know, others read it and hopefully put it into practice. 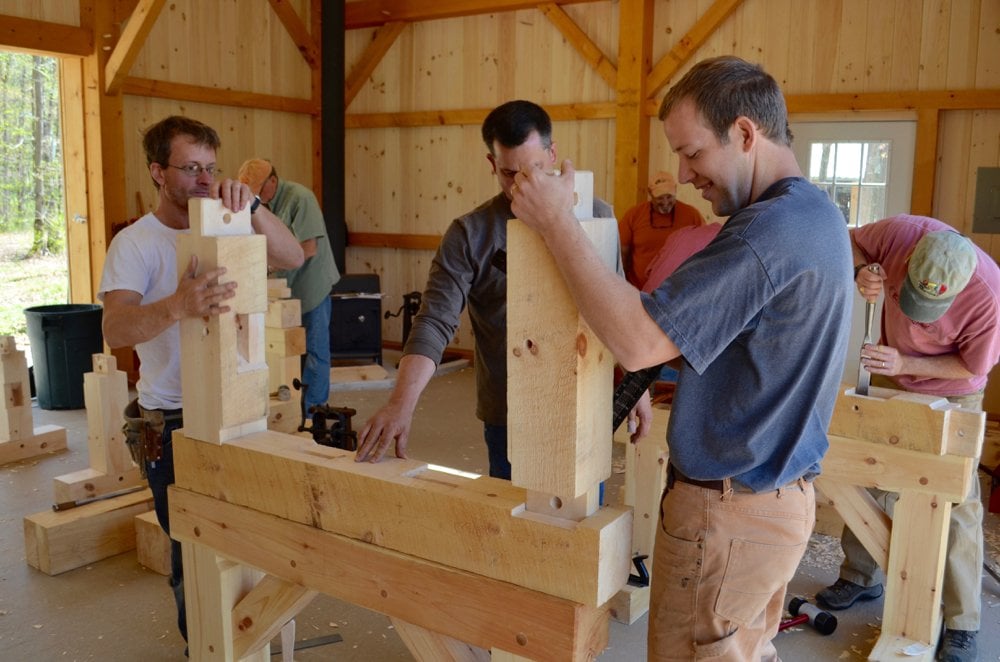 I hate the thought that it might just be information passed on to boost someone’s ego and hope that others will practice the methods and techniques and make it their own and also that they won’t just do it once with a “been-there-done-that” empty attitude but that they will really master it by the rote practice it takes to truly achieve mastery and then pass it on to their sons and daughters. Today we plant seeds in the hearts of thousands every day and judging by the comments, emails and so on we are indeed highly successful. 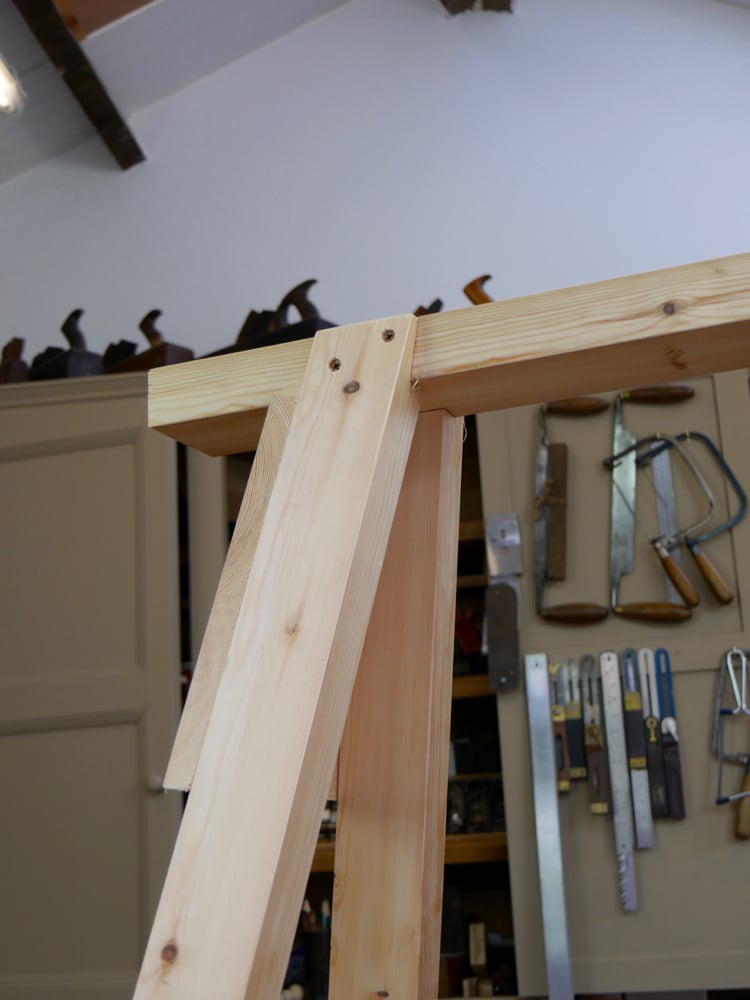 How to make live mouse traps from tin plate rescued from rectangular one gallon cans and threaded 1/8” brass rods and such is something I learned when I was a boy of 13. The skills and knowledge stayed with me through 5 decades and I found such knowledge invaluable. Folding the tin plate steel and soldering the folded edges, forming receivers for glass windows and making light springs to trip the mechanism flawlessly in a split second, that sort of thing, was built into a customised curriculum just for me by my metalwork teacher. Mr Curbishley and I shared a common interest in field voles and metalwork. We shared amazing lunch breaks together talking, planning and making. I learned enough to make me a tad less dangerous and to be productive in an alternate craft that way. 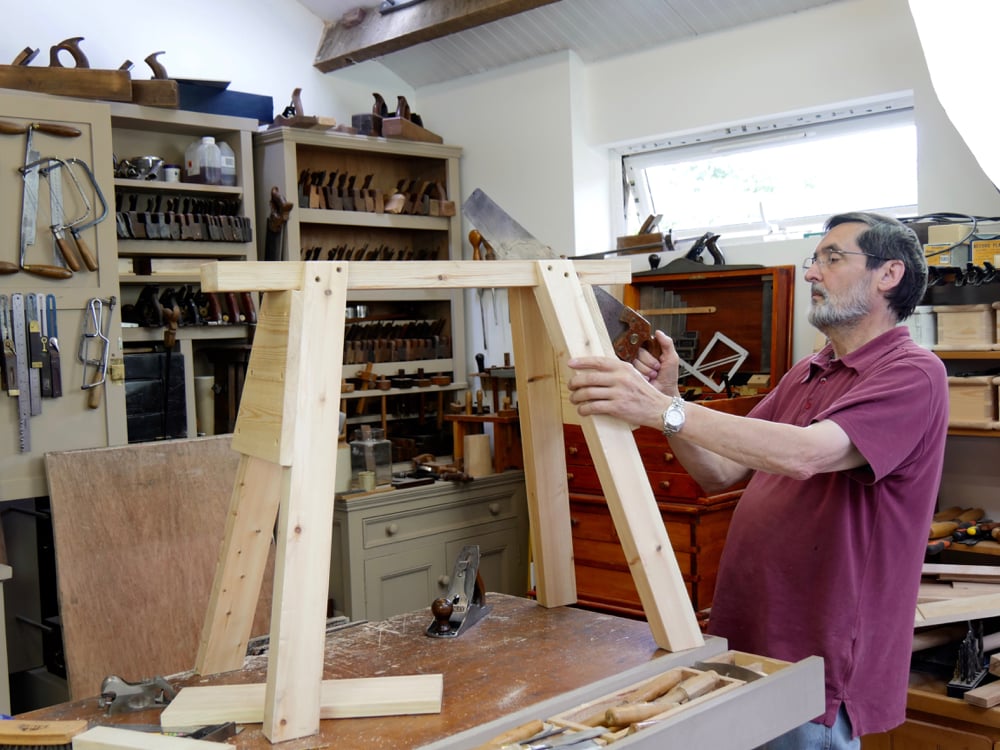 This week we returned to making a shop project I have done before as a blog post but this time we filmed it. This project I find totally useful and important to my work and it’s a project without which I would find myself lost. In the last few weeks I made two types of wooden supports to work from. 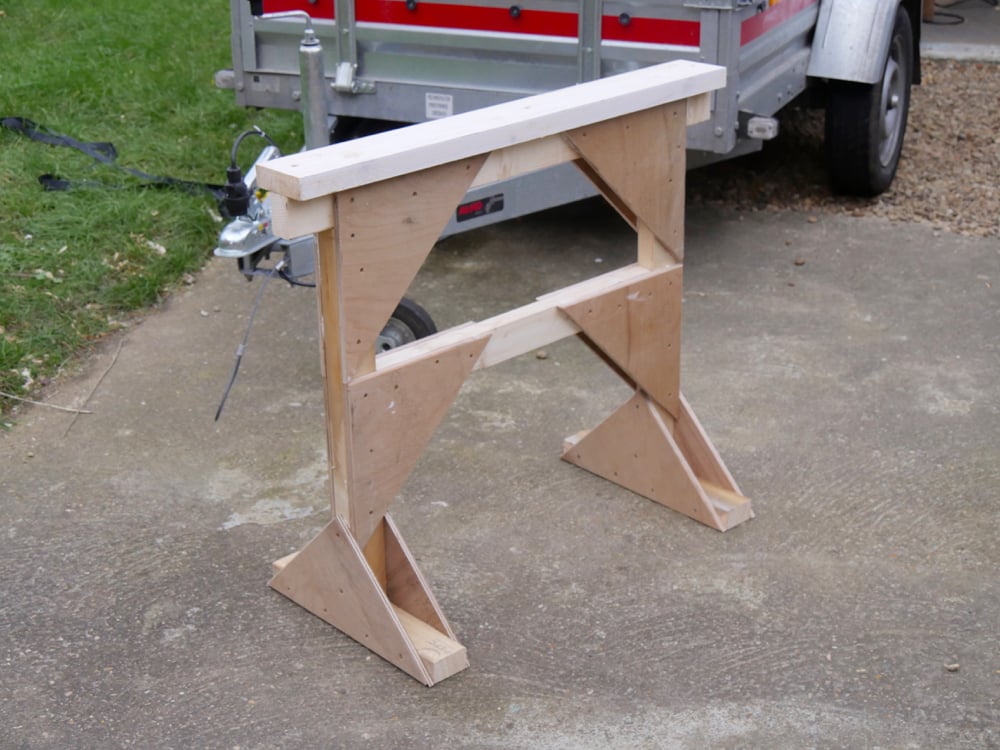 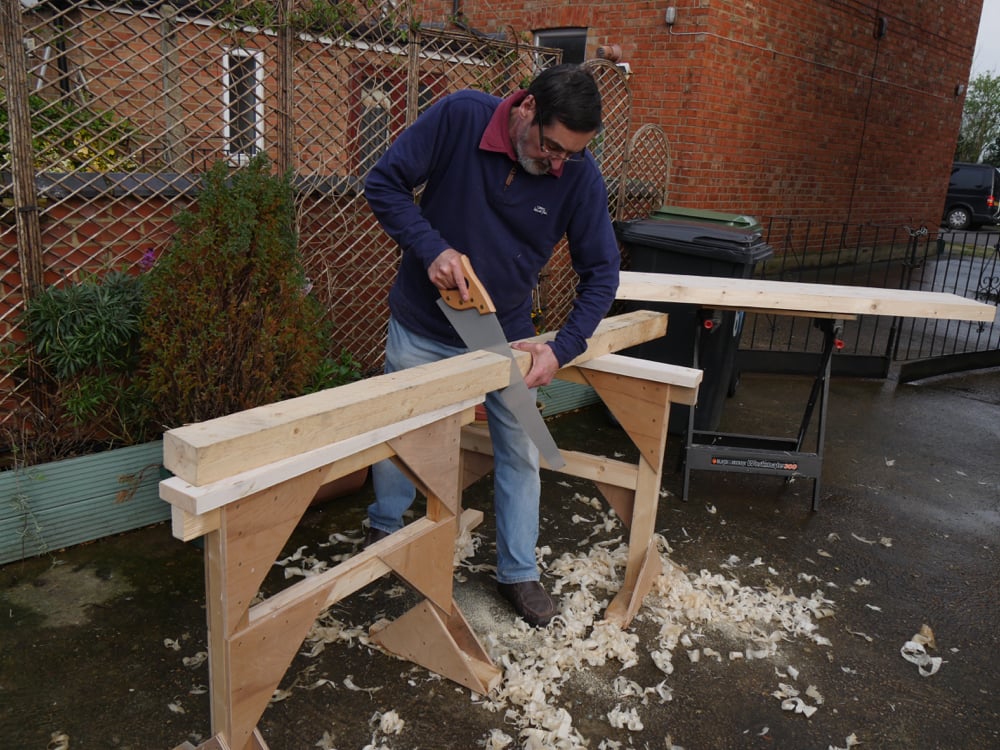 One is a robust but not at all graceful looking trestle and the other a four-legged sawhorse with a grace and stability few such aids match. On the one hand you have roughly an hour’s work and on the other half a day. I will be posting this as an updated blog as a companion to the filming we did. This is the best way of preserving that phase of joinery development I learned from the 60s but that reaches back to the early part of the 20th and even the 19th century. 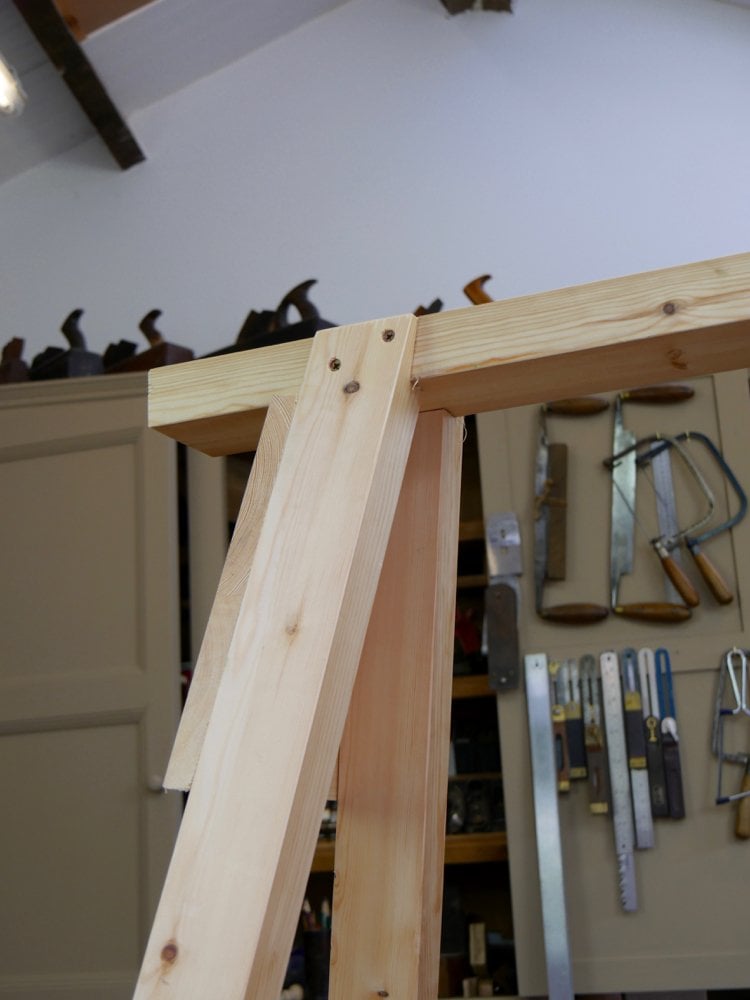 You will see that I have used screws instead of the cut nails that would once have been used. Cut nails actually worked better than we can imagine because they ‘bit’ into the wood with angular corners, very differently to round or wire nails; not as good as the screws. Round nails, the ones we commonly use nowadays, tend always to split wood near to the ends of sections of wood and are also easily withdrawn. This is simply because they have pointed starts instead of square ends. The square ends actually punch the section of wood to take that punched section into the main body of the wood with the nail as the nail is further driven. It works. Screws on the other hand do not rely on friction and compression to hold them but have pull-power we shouldn’t disregard. It’s not cheating as some say and it is indeed one of the finest inventions I know of. When I get concerned is when they completely replace specific joints like dovetail joints and mortise and tenons because they are not co equal and never will be. Screws work well with some joints like  housing dadoes for instance most of the time and other joints of that ilk. The question has been whether screws in endgrain have sufficient lasting strength and durability in stress conditions over the long term.  Things changed in recent years through the development of new and very special threads that work exceptionally well for some aspects of woodworking. In the case of the leg housings for this project they work great. Combined with the glue we have a dynamic support aid for a lifetime piece of equipment. In fifty years using them on work platforms of diverse types including these shown I have never known them to fail. For large timber framing of course such structures are inadequate. You must develop your project equal to task. Timber framing trestles and stools are moved less than say a joiner working through the second final fix of a house as in times past before miniaturised machines replaced hand work. 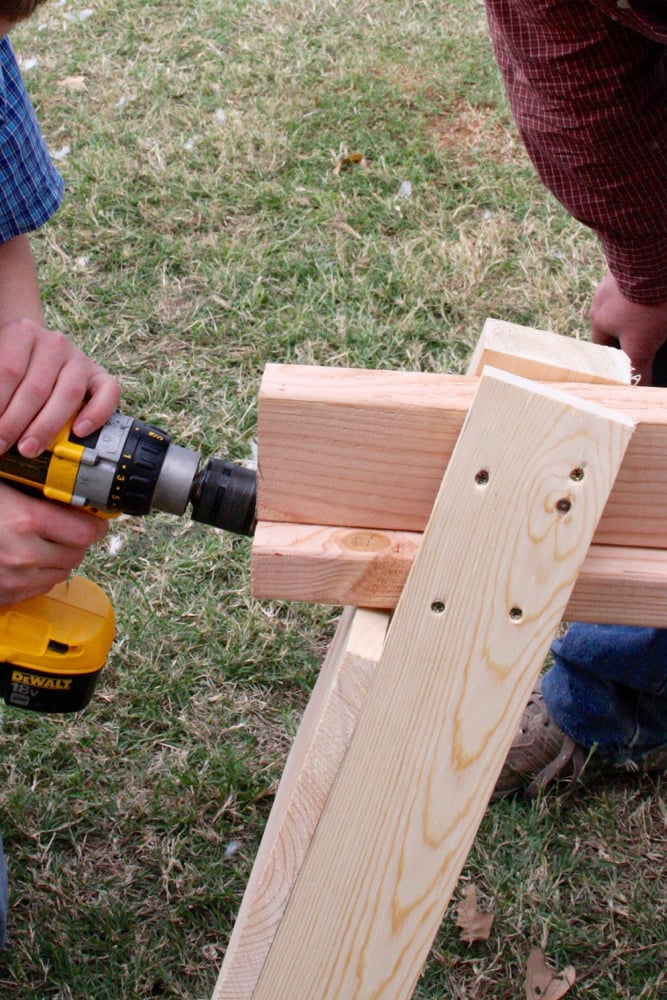 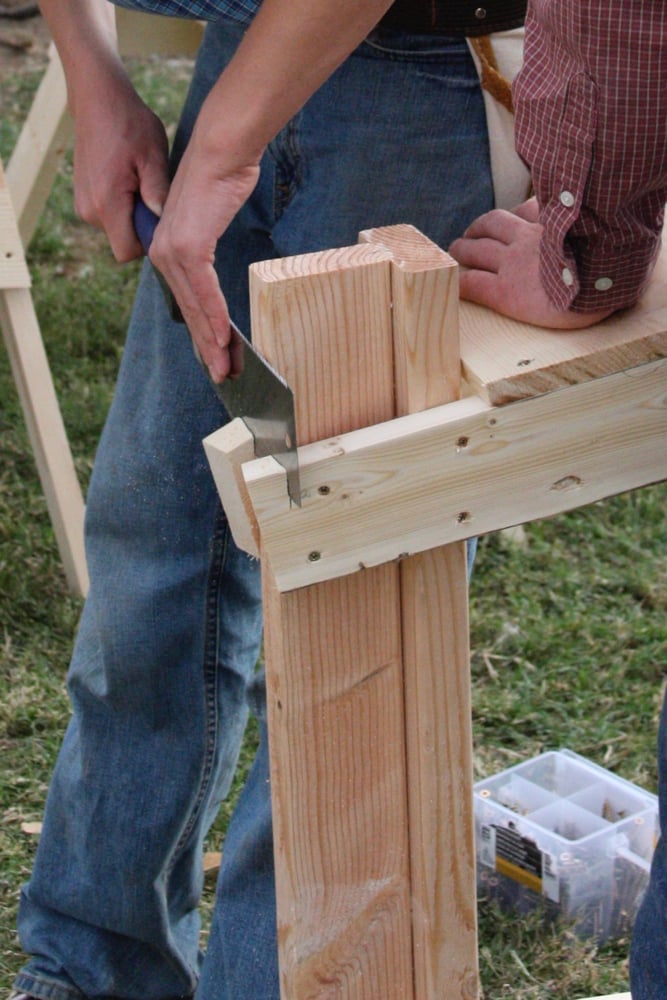 All in all I have enjoyed those aspects I learned from men I worked under but for making the film it was probably too unpredictable and difficult to lass on the information. Today it’s often a question of shooting nails from a nail gun and tossing the whole when the job’s done or the project unneeded. Two 4x2s (UK) nailed in a T gave the angle and four 4×2 legs air nailed to the side faces is a two-minute job. Add some bracing and you are on your way, but it does have the ugliness I can’t really abide. 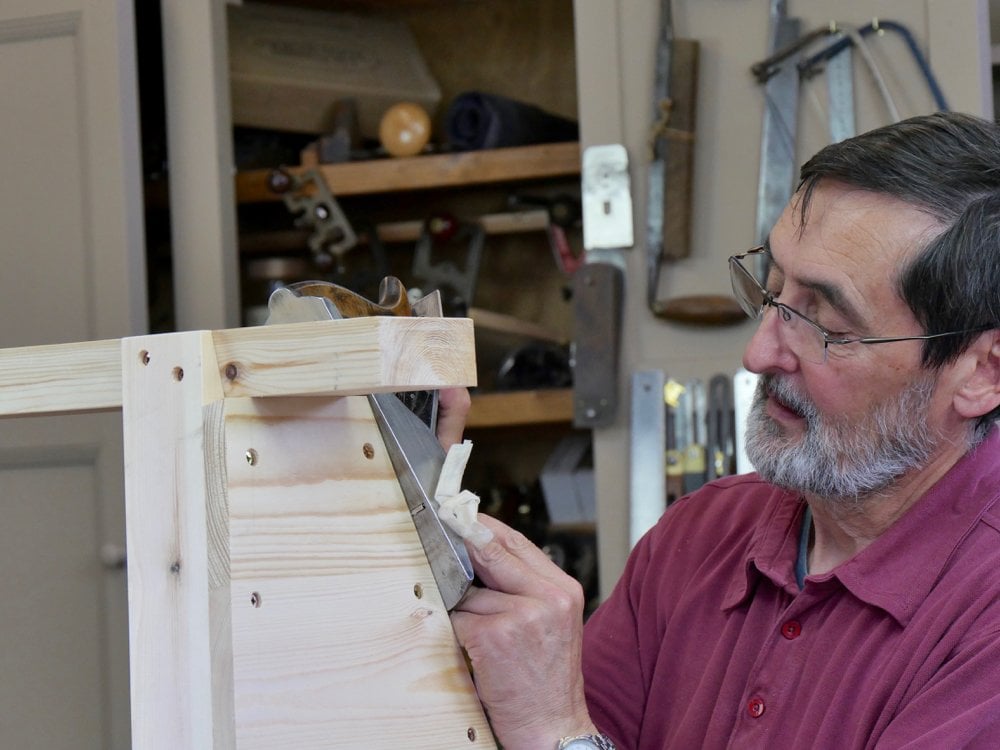 Watch out for the new series after the conclusion of the current chess board series and the upcoming table making series on woodworkingmasterclasses.com. This new series will be a two part series so not too long to own something that’s been around for centuries. 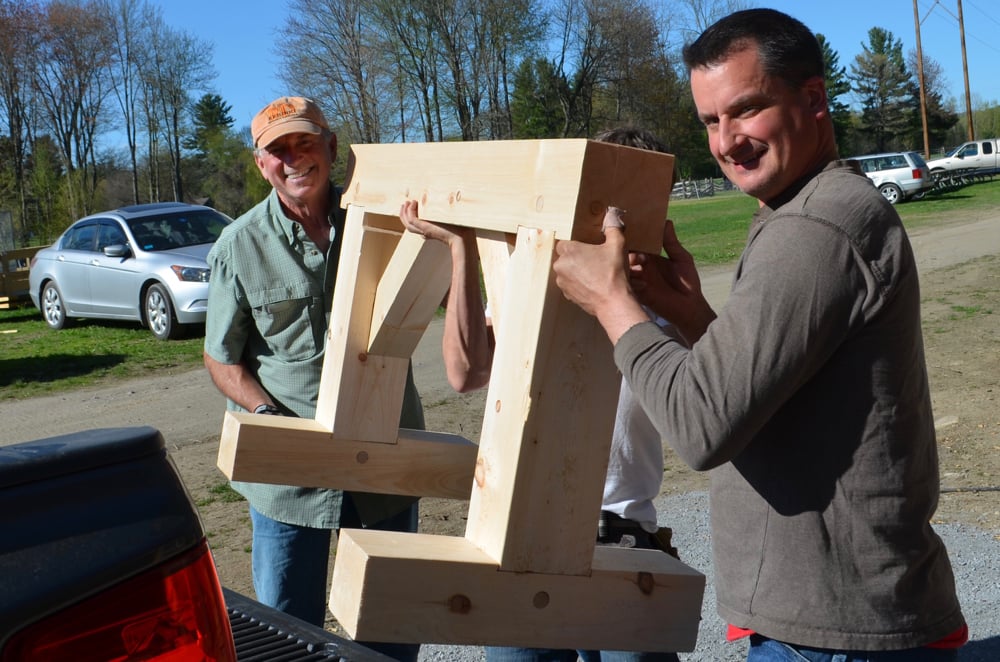 So, many hidden nuggets of reason can be lost as decades come and go and so then the craftsmen that used many methods of construction we might never know existed. The methods of work I was shown are in some ways nothing like the video we filmed. 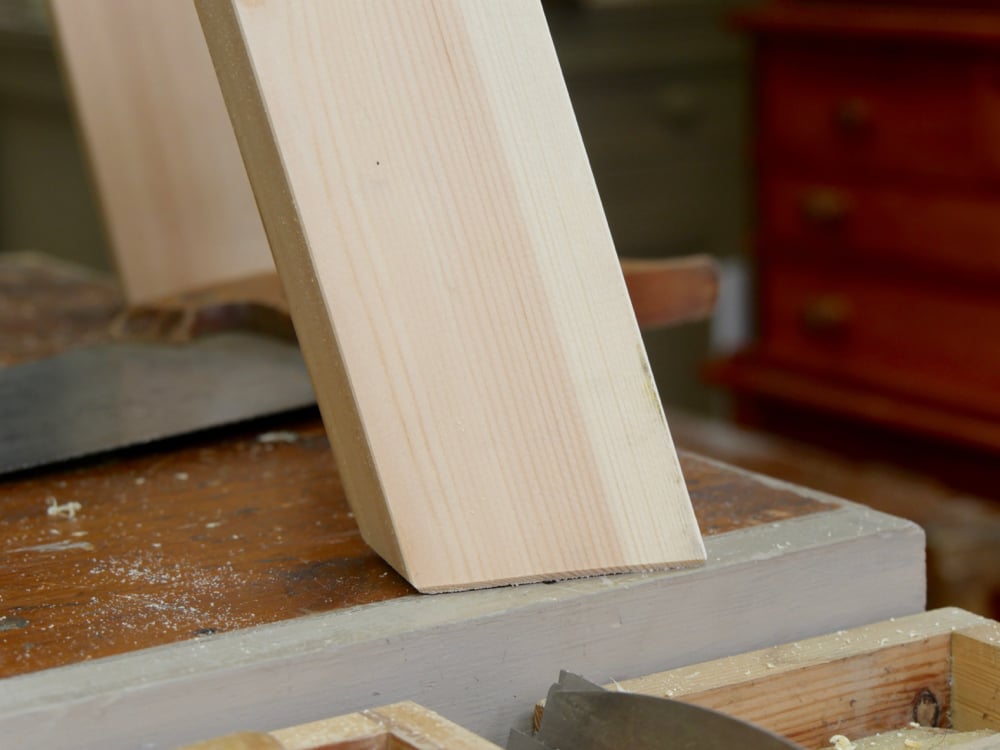 Perhaps the way I was shown would be make good viewing in it’s own right because none of it was developed to be passed on outside of the fraternity of carpentry and joinery brothers. Making mine this week to reach possibly hundreds of thousands means that I developed a system that was shareable and replicable without the guesswork method wherein George, my mentoring craftsman, took the 7 pieces of wood, gauged a pencil line top and bottom of the crossbeam and made the whole thing and measured nothing, or at least very little. I would say that this took maybe half an hour to an hour max.