A chisel’s cutting edge doesn’t so much wear away only but fracture out of sharpness. It’s funny that we think of it as wearing to dullness in the way river rock is rounded by river run and beach pebbles and stones by tidal washes when in my experience, looking at the edge and magnifying it, the edge is as much fractured unevenly and looks more to be cratered than just worn smooth. In actuality both things take place and that’s why we usually determine edge sharpness not by trying it in the fingernail and not necessarily by how much effort we use but by how much we need to elevate the angle of the chisel to get it to slice or pare cut into a surface.

Pare-cutting is only possible in two ways, either the surface wood adjacent to the cutting edge is elevated in front of the cutting edge, or the chisel handle is elevated so that the cutting edge points downwards into the wood. A newly sharpened chisel means that the bevel has been ground and honed back sufficiently where the bevel meets the large flat face of the opposite side of the chisel and has removed any notable edge fracture and wear. Even the slightest elevation of the chisel handle enables the cutting edge to pare into the wood. As wear occurs through using the chisel on wood, the intersecting line along the cutting edge becomes rounded through wear and also fractured too. The more the chisel is used the more the wear to the edge. Most wear and fracture occurs noticeably adjacent to the large flat face which looks rounded as light catches the intersecting faces of bevel and flat face. If you look at this image you can see a line of light as a narrow band following along the edge. 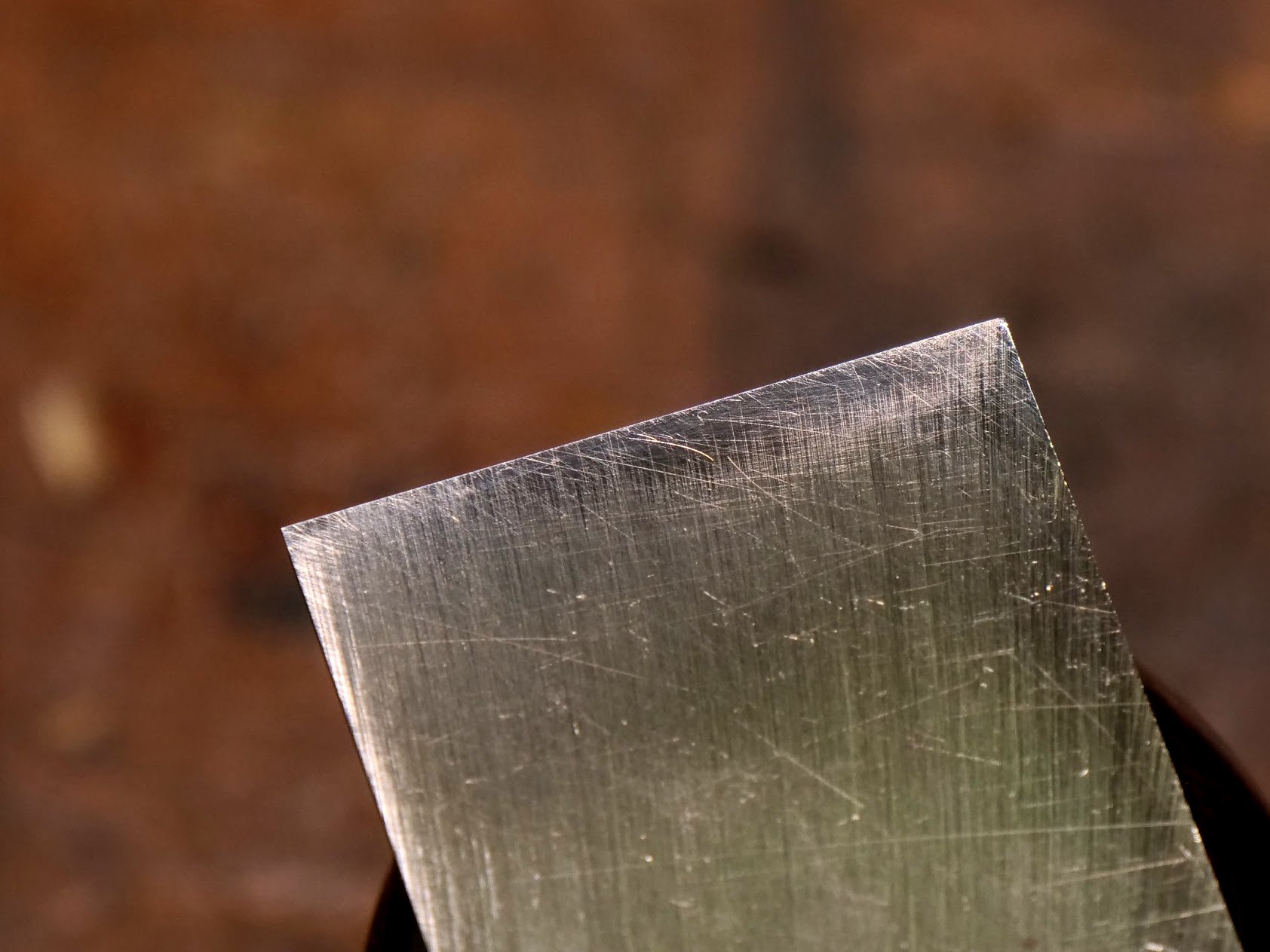 As the bandwidth of light widens through use of the chisel, remember light cannot reflect off a sharp edge, the chisel reflects a higher level of dullness, which is reflected in the bandwidth along the back or flat face of the blade, usually as a white light. 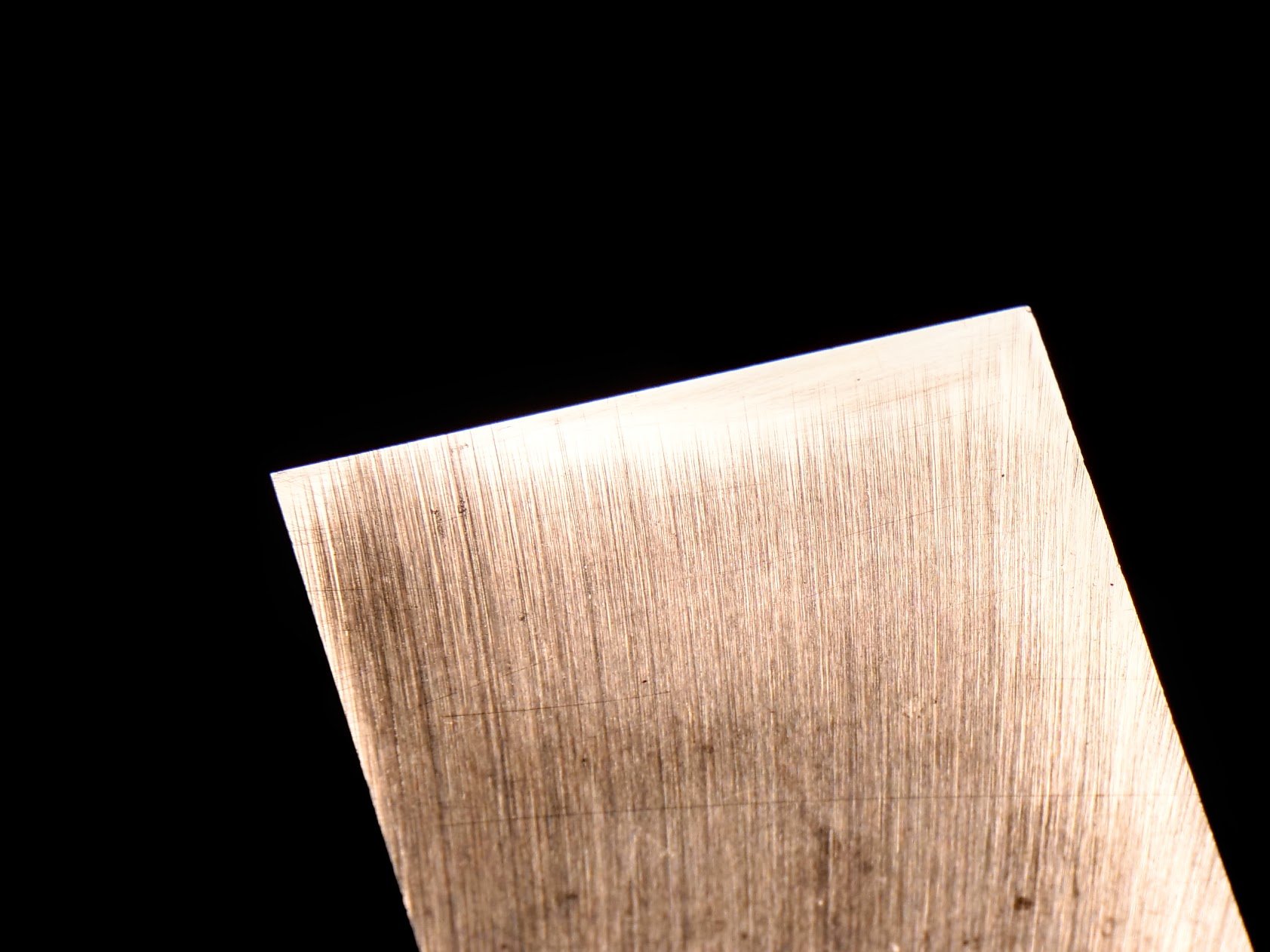 After sharpening the bevel the band of light disappears altogether

What happens to the blade at the cutting edge (whether we do this scientifically or not is immaterial) can be determined visually by mere observation. Flip the chisel, look at the edge for that band if light and you are there. Go sharpen up. Relational experience there at the workbench gives us much information as a scientist can with a microscope. We don’t need science to see we need to sharpen up. Sharpness is mostly detected by three things looking at the cutting edge, sensing the amount of pressure needed to make a cut, the angle of presentation in free hand cuts.

Observation – what we see

As we’ve already discussed, the band of light along a cutting edge indicates that, to some degree at least, a blade has lost its cutting edge by edge fracture and wear. The wider the band the greater the wear and the less effective the cutting edge is. Mostly, this band of light is much more readily apparent on the large, flat face or reverse face of the tool blade. This is the same for all single-bevel tools; planes, chisels, spokeshaves, drawknives and so on.

When tools are presented at a fixed angle as in planes and some spokeshaves, that is, they have blades immovably bedded to the plane body by being locked in place. The angle cannot be altered by elevating the blade as with freehand tools. The only observations then will be by the band of light and the amount of energy required in the cut and not by elevating the cut. A further observation does occur however. The plane tends then to ride on the bevel of the plane’s cutting iron and makes no cut because the existing cutting edge has been fractured away to a level that it is no longer able to reach the wood surface. Extending the cutting iron out further for a deeper cut exacerbates the problem as this serves only to lower the heel of the plane and lift the front end. The blade edge still cannot reach the wood. This is the same with spokeshaves like the #151 type, which technically is a side-handled plane.

Skewing the plane in presentation to the wood does of course lower the angle, but then we lose the benefit of the long sole maintaining levels.

It still, after all my decades of using planes, surprises me how well a bench plane will actually cut, even when dull. There can be no doubt that in an ideal world plane blades would never dull. Depending mostly on the wood type, the need for fresh sharpening is a task I do readily more than once a day if I am working at the bench all day. Ordinarily this is still what I do mostly. Teak is a wood that is very hard on the plane blade cutting iron. It really knows no equal when it comes to dulling irons. This is not because of hardness but silica in the wood itself. Some softwoods will dull irons quicker than the densest and hardest hardwood too. Knots in spruce are merciless as can be dead knots in pine. These are not measured for hardness in standard Janka tests. Such things as these are the cause of edge fracture mostly. So with dullness we find we need more pressure which always results in poor workmanship, bruising and such things like tearout, ripping, unevenness and so on. As rust often reflects neglect, so a dull edge and the added need for excess force reflects an attitude towards sharpening regularly. An overly dull edge, one that’s gone too far beyond a few quick strokes on the stones, often reflects the dullness of its user/owner. Of course in the early days of a new woodworker this can be purely a lack of experience. Discernment comes only by experience of working with the tools and gradually the sledgehammer of a tool not cutting at all becomes a nudge to submit yourself to accept early discipline to sharpen up.

I have seen many students become so focussed in the work of cutting, sawing, planing and so on that they simply lose consciousness to other elements. In time, instead of sharpening and adjusting being something fractured off or bolted on, it becomes as intrinsic to the work as the severing cuts. In the honing of the tools comes the honing of character and thereby the honing of the person. How this acceptance of the task happens I don’t know, but when it does it is a pure joy. When clumsiness is replaced by dexterity and awkwardness by confidence, work becomes a poetic flow.

So we see that all force comes in measured amounts but when neglect leads to the need for excessive force and we don’t respond, we are a sad and sorry being. I’m glad for the whack on the nape of my neck with a squaring rod accompanied by the command that shouted unwaveringly “Sharpen up. Lazy sod!” It wakened me to the ever present need to stay in touch.

For the longest time I saw people, not good woodworkers with a working knowledge, take the edge of an edge tool to the back of their thumbnail to see if the edge caught. Admittedly this first happened in the USA and I was already taught about sharpness generally. It seemed silly to me then and still it seems silly now that any such test is needed at all. Whether to check for sharpness or dullness it has little value. A tool sharpened to 250-grit will ‘bite‘ readily in the nail but that’s not truly the sharpness we need. The fact is it doesn’t reflect sharpness as such–better to look and trace the fingertips carefully and lightly in my view. That’s far more sensitive and accurate for evaluation. It’s simple and quick as well as effective. Of course the sight test alone works just fine, and as this usually follows that the tool was ineffective, the sight test is mostly mere confirmation. 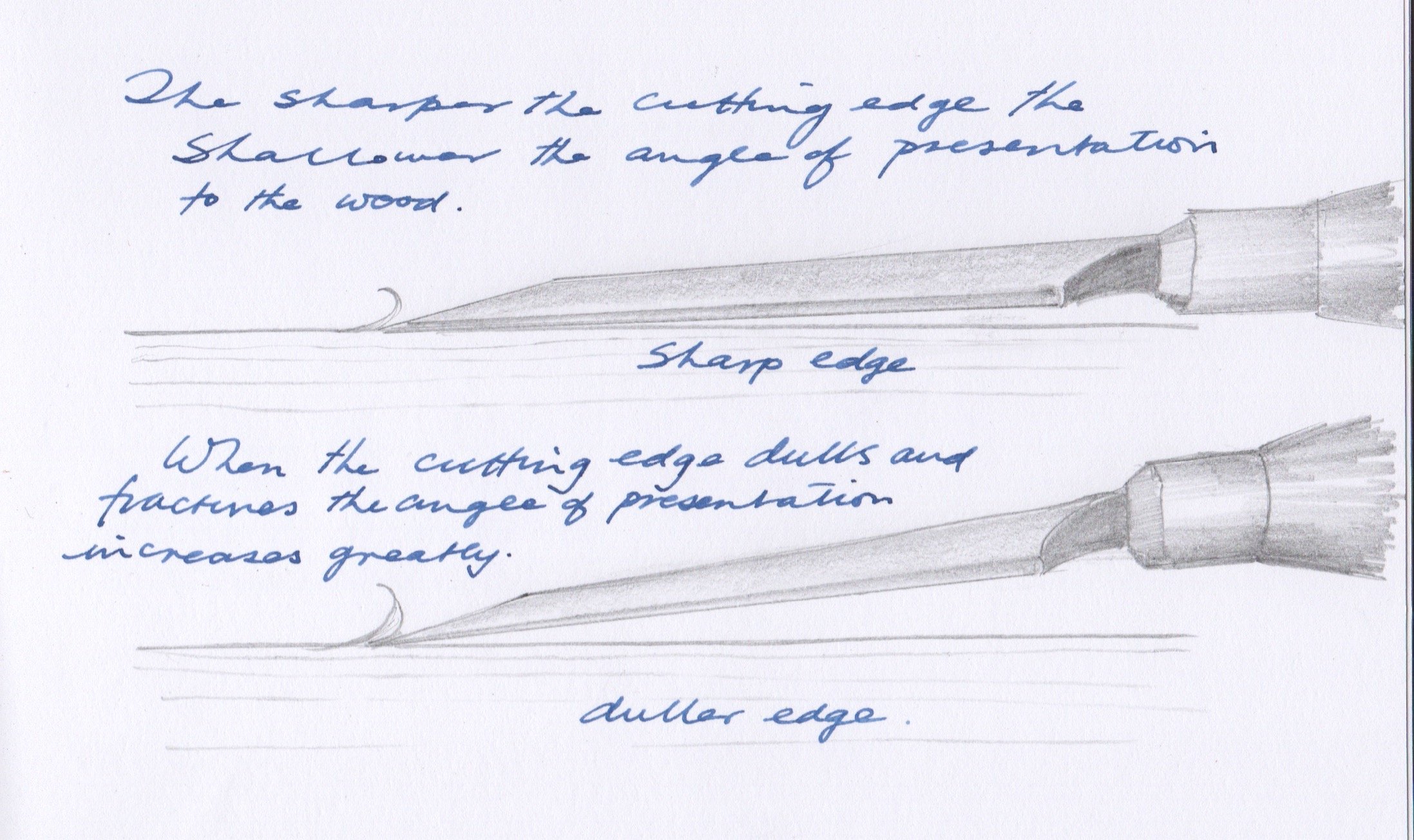 Paring is the common use for chisels. We micro-adjust the presentation of the cutting edge to the wood purely by how we feel the chisel is working the wood. If it slips over the surface without an immediate entry into the surface, at some level it is either dulled or has a back bevel on the flat face. Not really an uncommon thing. The step needed is to remove steel from the bevel by honing. There is no need for a chisel or plane iron ever to be ground on a mechanical grinder for everyday sharpening, only when a deep fracture has occurred, and even then I might question its use. Abrading the bevel is quick and efficient on most any abrasive. Once the large flat face of any edge tool is initialised by abrading and polishing to flatness, it need never be done again; it’s done for life. Focussing on the bevel is simple enough and we’ve written a plenty on that both here on my blog and in my book Essential Woodworking Hand Tools.

So there you have it.