My working with hand tools has nothing to do with a reluctance toward living in a post modern world; just so you know. I’m just thankful I do, and that I feel to a balanced degree I’ve been able to embrace it. I always like seeing old workshops with wood leaning against rustic walls and scarred bench tops, tools spread around and shavings ankle deep that were never swept for a decade but scuttled into every corner and such. But I like more modern workshops too, as long as they don’t look like kitchens that is, and, contrary to those who think they know me as being this or that, I like all kinds of workbench be that English, German, Asian, or anywhere else in the world. Do I like any particular workbench over another? Well, I think that that’s really quite a silly question, don’t you?. Doesn’t every hand tool woodworker like almost any workbench that works and works well? That’s me, I just like all workbenches as long as they are not, well, too pretentious or prissy, and then, all the more, funnily enough I like workbenches made from greenhouse staging and kitchen tables and picnic benches too. They all mean honest work to me and I love when woodworkers put a spin on their own working environment. Who wouldn’t? Except the exclusivist.

My world enjoys a limited yet balanced outlook surrounding the use of machines so here again I seem always in need to dispel the myth put out that I don’t use any machines or that I don’t like the use of them, that’s been too silly too. Just because I have views that people might do too much with machines and miss out on developing their real woodworking skills does not mean I don’t like or don’t use them. Far from it. I use a machine at least once or twice a month and I have much of my project wood milled to near size by my friend Chris who also mills the hundreds of parts it takes for my classes. 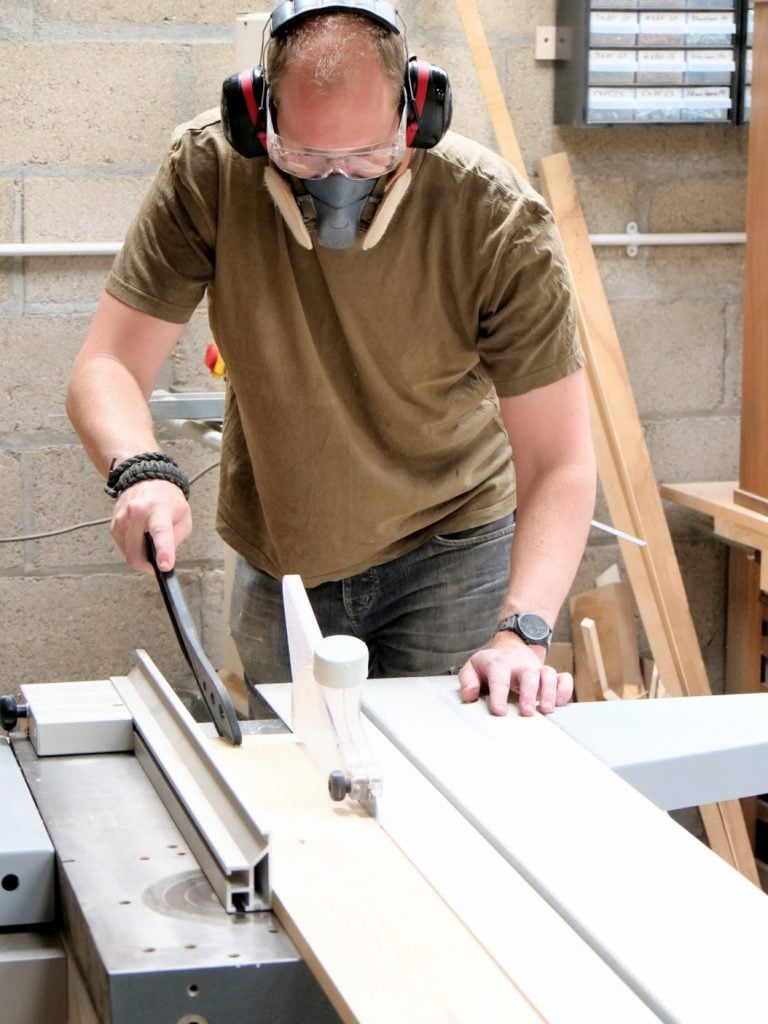 People should just check in with me first, or check my blog because I have said it often enough, I do like machines and I use machines, but only a fraction of the time machinists do because I have skill and have found the ideal balance twixt machine and hand work. I have never used the term power tools in general but that’s just me. Call a spade a shovel and a machine a machine no matter the size or whether it’s static and bolted to the floor or hand held. But I do shun robots and robotics, copy machines run by computers and such like that. This seems more to me to be a sphere I care nothing for because its purpose is more for the unthinking automaton realm that displaces workmanship and any thought of craftsmanship. 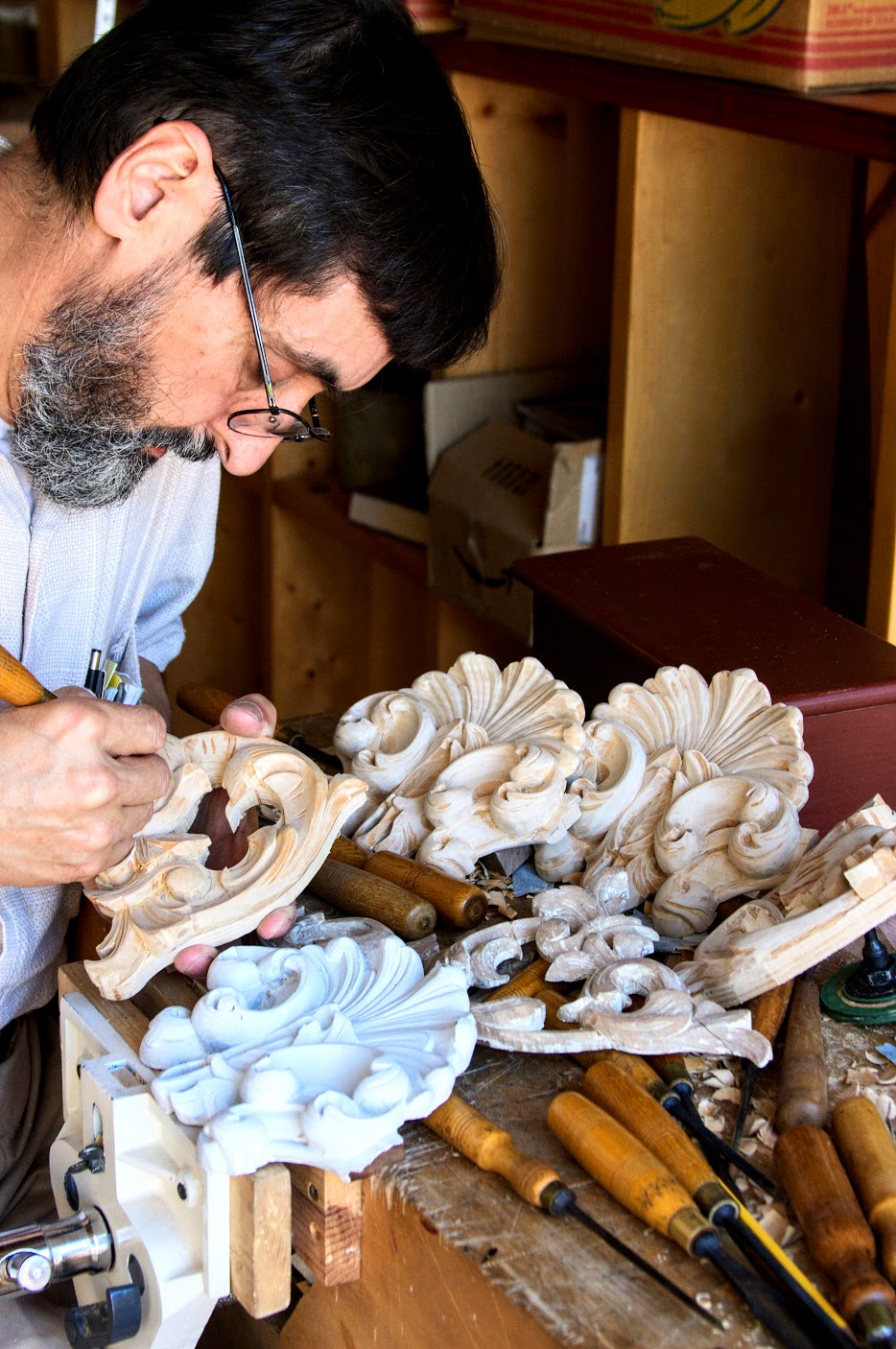 I would have been very disappointed had I used some kind of copy router instead of gouge work.

My work world seems different to the world of other woodworkers in the professional realms. MDF and pressed fibreboard are not a part of my world at all except perhaps to use for full size layout of a project. I remember MDF coming in in the 70s when all the woodworking magazines extolled it as the new future for wooden components. I tried to imagine what would have come up with the Mary Rose had everything m[been made from MDF. Of course it’s a hideously characterless product developed yet again for the mass-making world and adapted by the small scale user to cut costs beneath the facade of fine (meaning super-thin) veneers. Biscuits hold the components together at the corners and other intersections 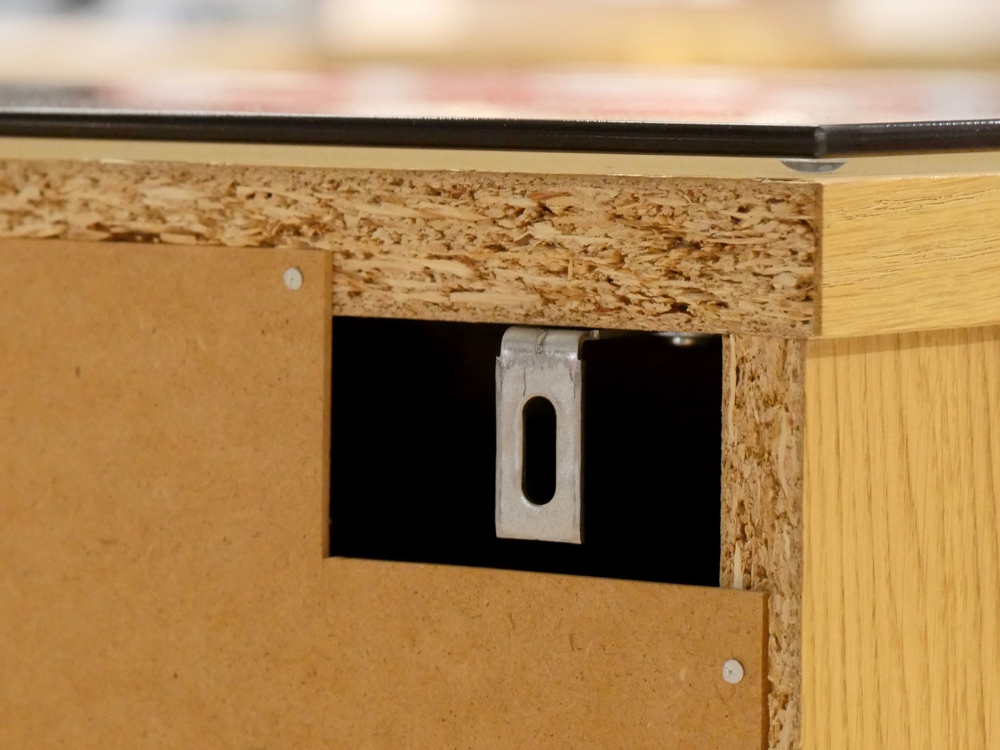 and the edges are lipped with oak strips only. It was hailed as the new material of the modern era for the evolving world and I see friends in woodworking who trained in college and university courses that do little more than feed sheets of MDF into machines much of the day, week and month 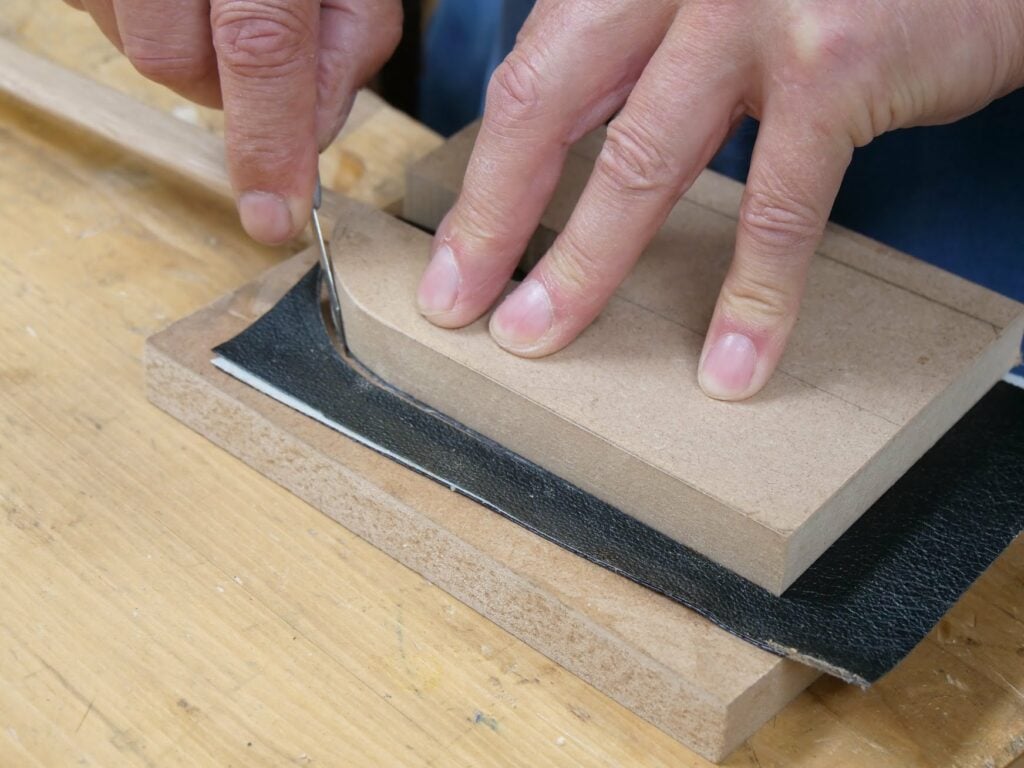 and have multiple thousands of pounds in tuition debt they will likely never be able to repay. Oh well.

So, does this smack of nostalgia? Not at all, I just chose to guarantee what I made for a hundred years so my bones can rest in peace when I go. 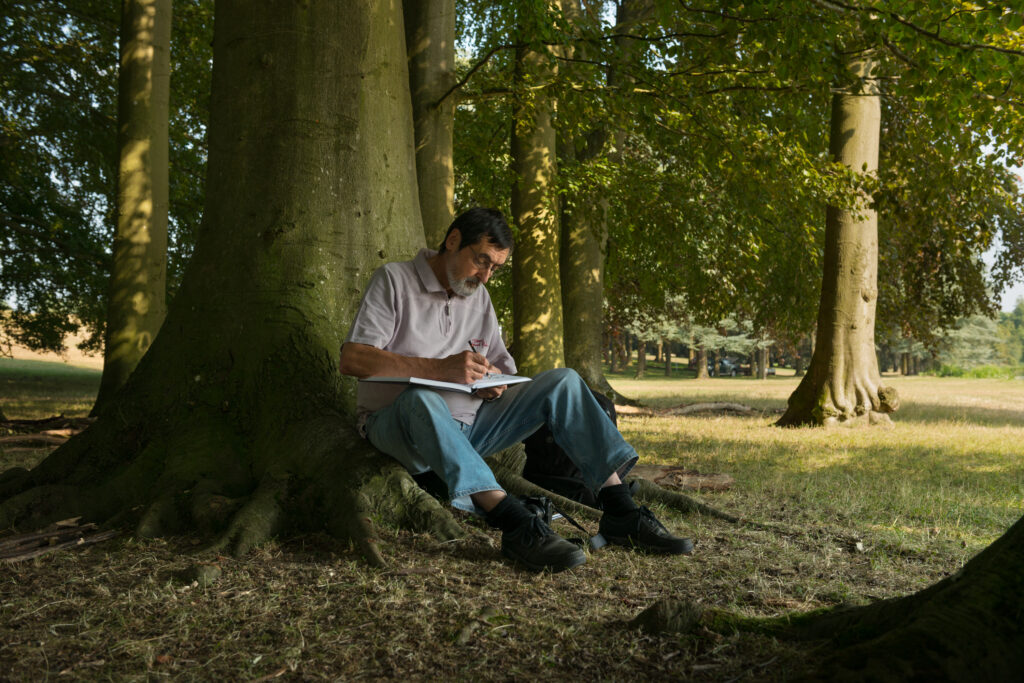 In my work world I still draw and sketch out my ideas with a pencil. I do this because I can use pencil to flex and bend lines in my mind to the paper, i like to shade and shape with it, add depth, texture and substance that’s mine not a machine’s and, and, because I have always used hand sketches in my work, I never lost a single bid on a furniture design because my customers watched me sketch out the design and witnessed their and my ideas blend into an emerging drawing from the lead of a pencil point on a sheet of clear white cartridge. Now I am not saying that CAD drawings don’t have their place and work well, not at all. 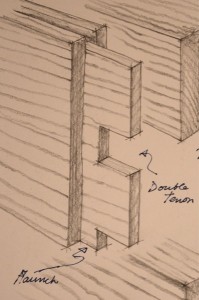 I think it was the blend of artisanry with being able to convey the envisaged work that somehow seemed to project something to them that hitherto they were unsure of. Was the thought possible and if it was who could pull all of the ingredients together. Without formal training my drawings became my signature. Prior to this new era where scanners and digitised sending made communication crystal clear, the lines were inevitably blurry. The days of fax machines was relatively short lived, but `i have to say, there is nothing like watching a sketch come from a soft lead pencil. 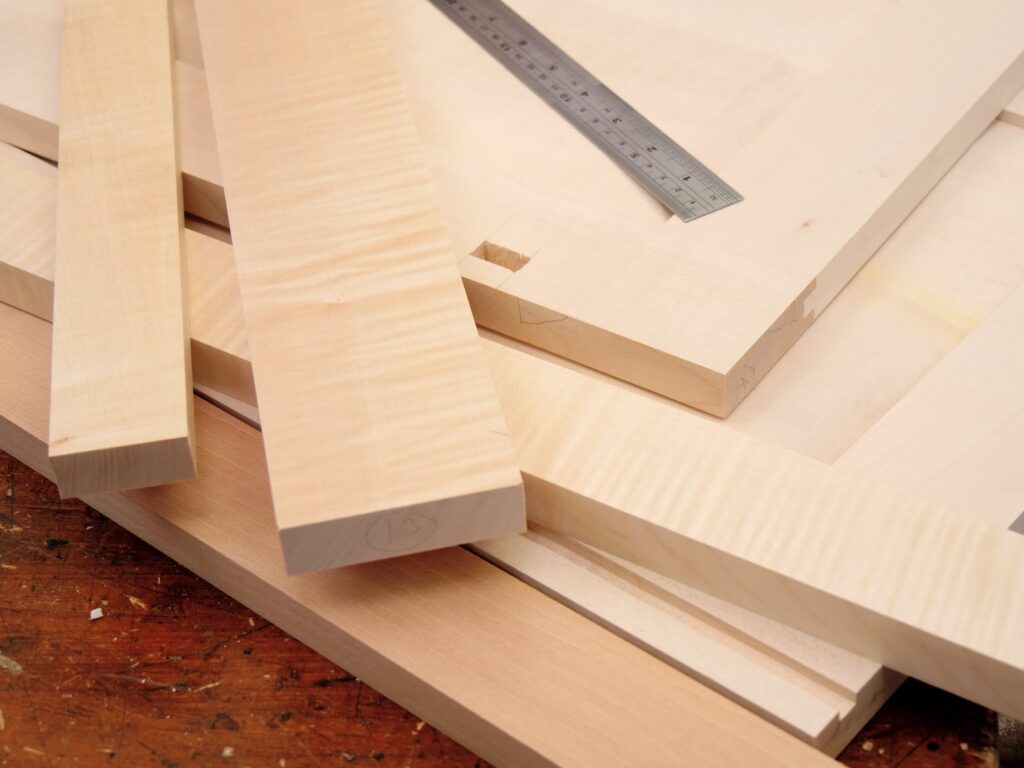 Apply this to planing some curly maple or sycamore in front of your would-be customer and letting them touch the silky smooth surface and you transfer the imagery from a two dimensional world to a three-dimensional world. Tap a frame with mortise and tenon joints together encompassing a raised and fielded panel in front of them and you begin to see that it is not nostalgia that always kept me in work but people who loved the idea of buying their possessions from a man or a woman skilled with their hands.

Whereas it is a changing world, and CAD and CNC methods have their place too, they have also seen to something of the demise of skilled workmanship, there is and always will be a gathering of people who both desire to work with their hands for a goodly proportion of their work and those who want to know that what is being made for them is made truly by hand rather than pressing keys on keyboards and pressing send to connect to the robots and automatons to the boards on the platen. 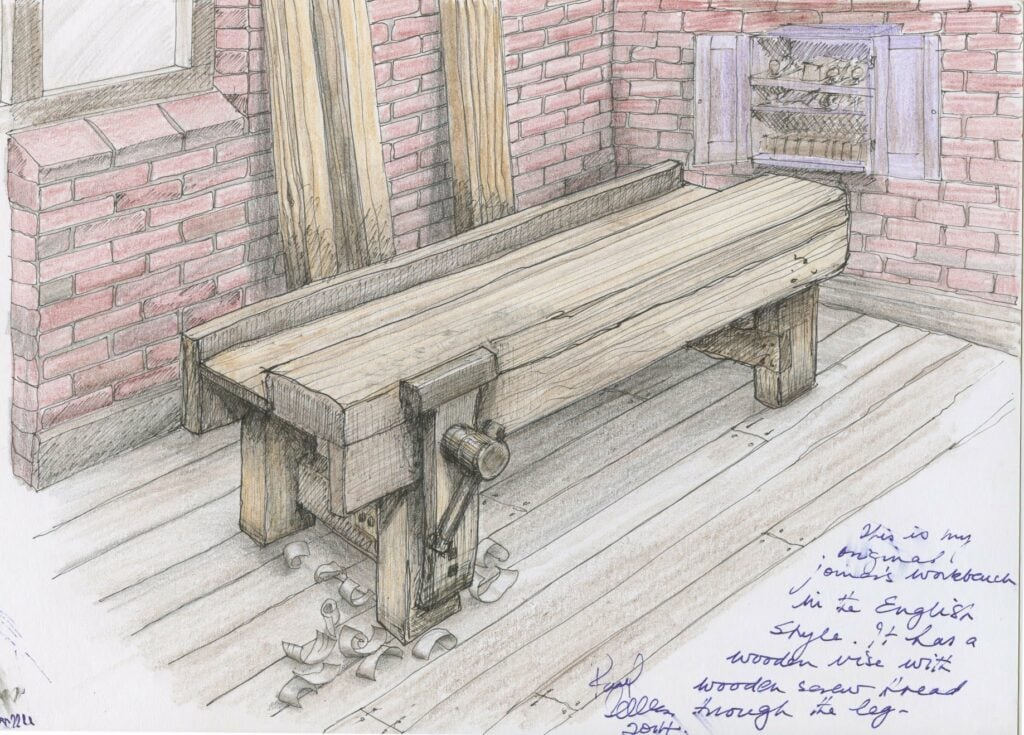 Of course I like that there is and always will be a place for nostalgia, I am not talking of nostalgia at all. I don’t believe that the destruction of looms and related equipment was just to halt progress, I think that the Luddites wanted to preserve a way of life. Frankly, my work would still be as economic as many machine operators who rely solely on machines and whose work looks like it was machine made. In my world of making and designing, drawing, sketching, hand shaping, planing and trimming with chisels is a place where I can and still could thrive perfectly well. 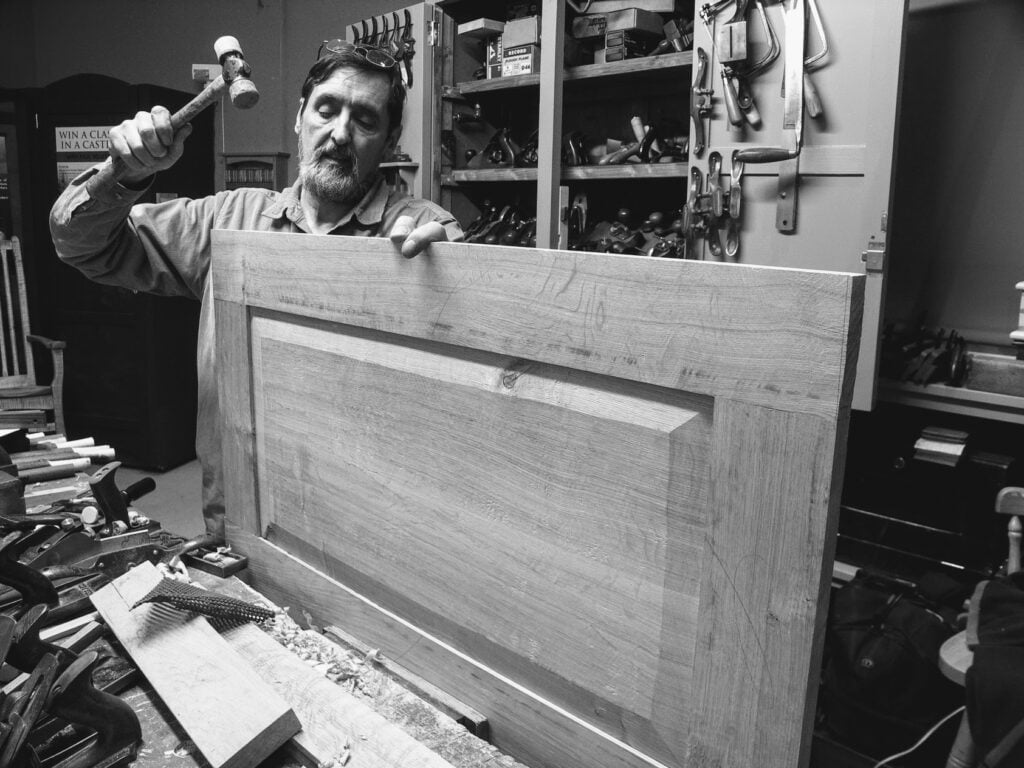 My tools and planes, my workbench with its vise from almost a century ago look, well, nostalgic, but because they look nostalgic does not mean nostalgia. For me it means realness, genuine workmanship. I still wake up on a Saturday morning ready toi go to work on the sixth day of every week. I only look forward to a day off because my body tells me its a good thing to do. I have only looked forward to Friday evening and a weekend off when I have been on a conveyor belt working for a mass maker of some kind.

I like drawings, sketches and paintings by skilled and novice artists sympathetic to recording history and such. Aldren Watson, Eric Sloane, Tunnicliffe even and many more. I would that more art depicting true life were available to us but again it’s not about a nostalgic past that encourages me on against the flow but the reality of the pleasure they have always brought me in the using of the benches, the tools and the wood. In the early days I wasn’t at all adept in using them as I am now. I couldn’t take a saw, alter the pitch or profile for a wood or a different purpose in a matter of minutes as I can now and nor could altogether understand the fineness I was looking for. I haven’t ever wanted to hold the world of woodworking back from progress but I never wanted to abandon proven technologies that continued to be highly effective and I think deep down inside we most of us feel the same way, but might not have developed the missing ingredients that make hand tools work so very, very well.