So I added another R Groves tenon saw to my collection of working Groves saws. The eBay find was a no brainer for me because it was one I’m yet missing from my saw gatherings. There are still two or three to come that I know of and there may be others I don’t know of yet, but I’m in no sweat. At the end of the day these saws really know no equal in my view, but that’s just my opinion. I like solid, well used and proven saws that have held up for a 100 years and are not so prissy as some. These have a fineness about them I like and you can really push them to the limits. Course for some reason they keep going up in price! 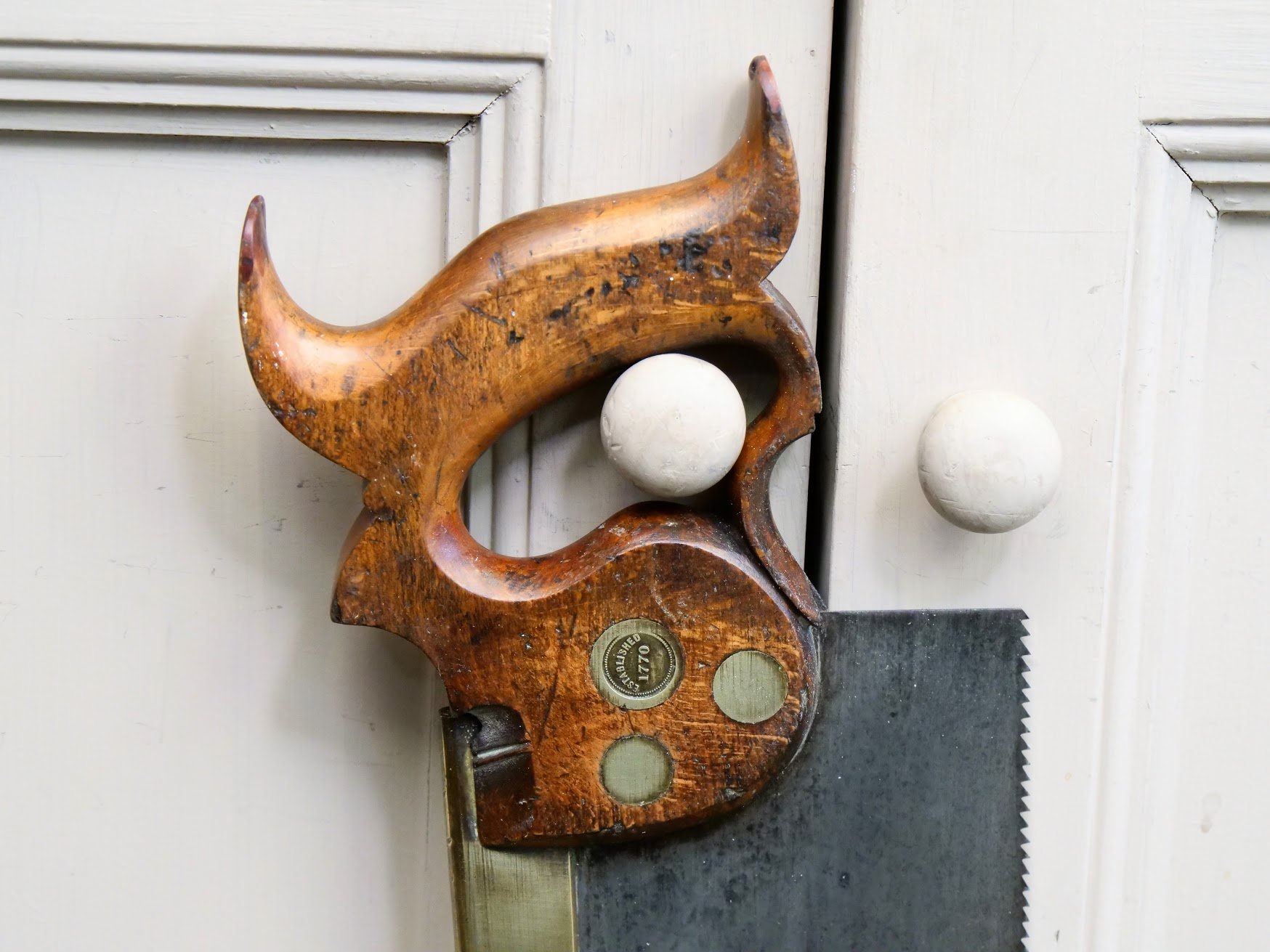 I’d checked the very ugly teeth for size and shape and decidedI would need to file them all off when and if I bought the saw before I bid for it. That’s what I’ve now done. Previously it looked as though it had been an 8TPI so I filed off and retoothed to the same size. Ripcut or crosscut it would be impossible to say except that 90% of all tenon saws were sharpened for ripcut. It took me under an hour. Originally the saw had a .5mm set to each side of the teeth, many times too much for me. And because the teeth were so irregular in size, shape and set, the cut looked like a rat chewed it; ten strokes took me only to a depth of 6mm or so. That’s how bad it was. 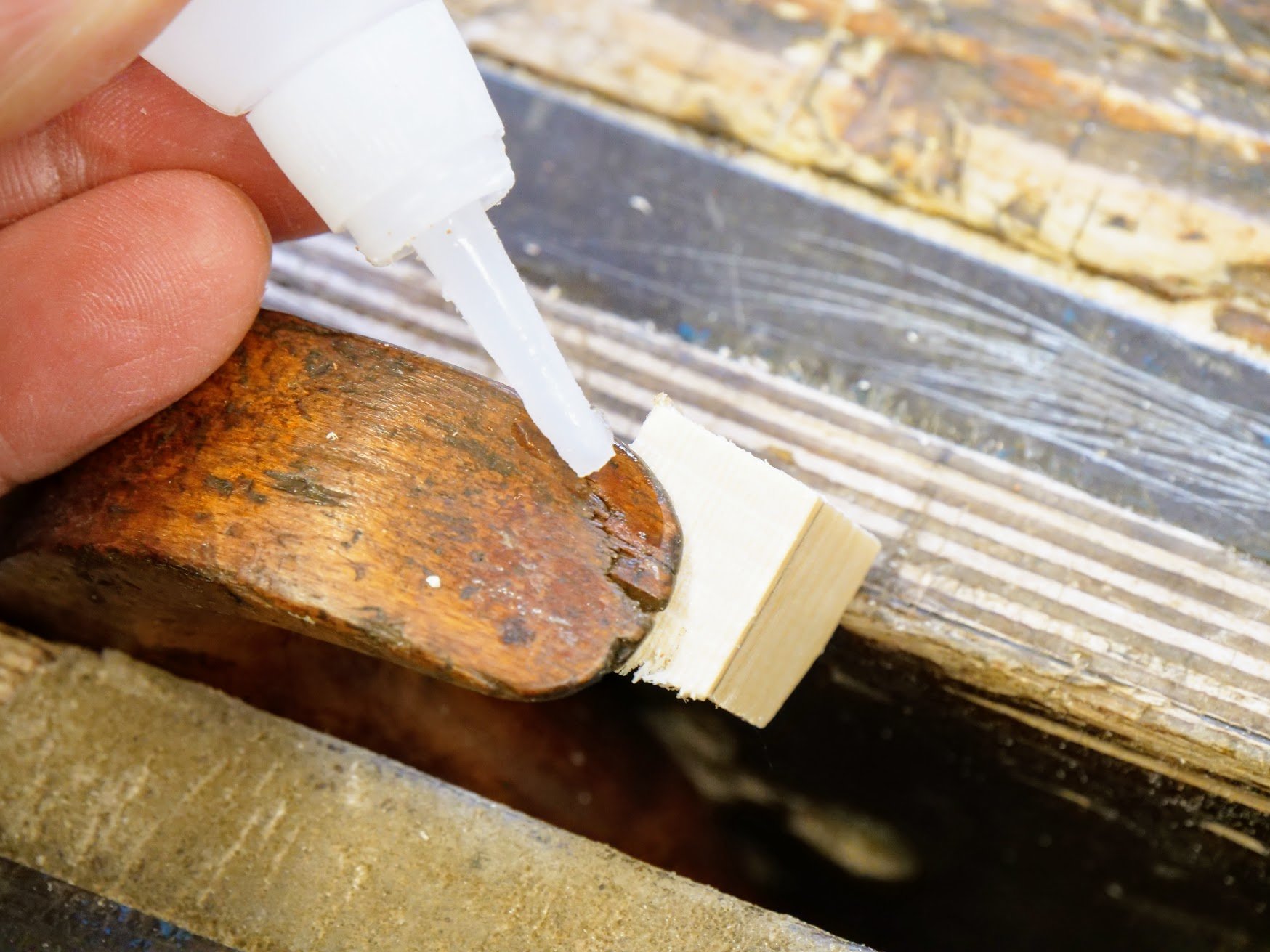 If you read a previous post on this issue it will help you. This saw had been dropped also onto the horns of the handle and the had slight cracks (a common issue) but both points were still fully anchored in place. I used thin superglue first, to wick into the roots of the cracks, and then I used a thicker version for the larger openness. A wedge placed appropriately pushed it fully into place and a light misting of accelerator gave me total closure. Chisel, file and knife work followed by light sanding and colouring with a brown and black Sharpie mix did the final trick of colour matching. 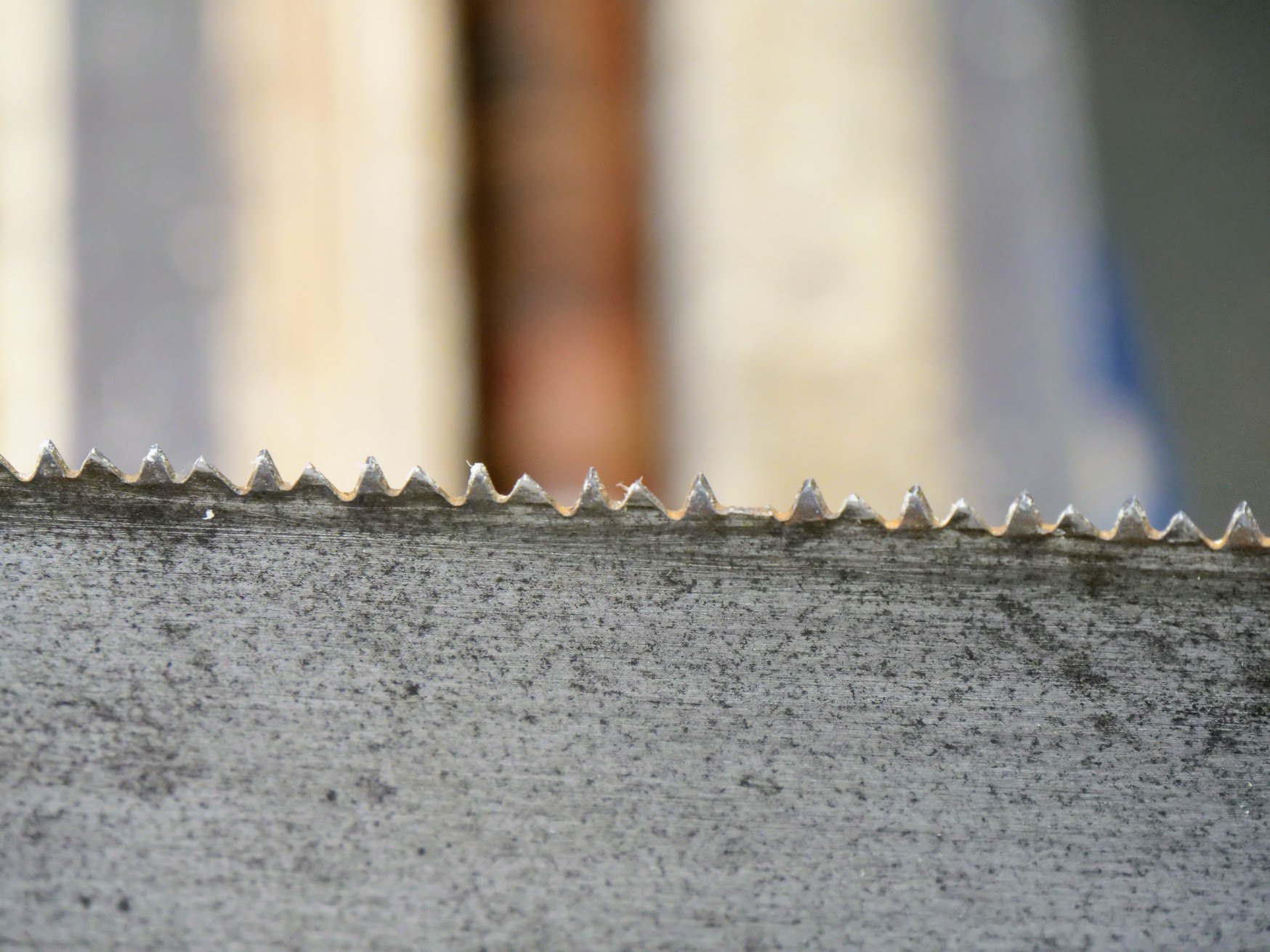 There are two common reasons resulting in tooth breakage usually, lack of or uneven tempering of the plate, leaving part or all of the plate too brittle to set and even sharpen, or oversetting the teeth. More rarely, a tooth can catch something hard and the snagging breaks off a tooth. To determine which was the case, I ran the file across the top of the teeth first. I had had to do this anyway to top (joint USA) them and get them level. 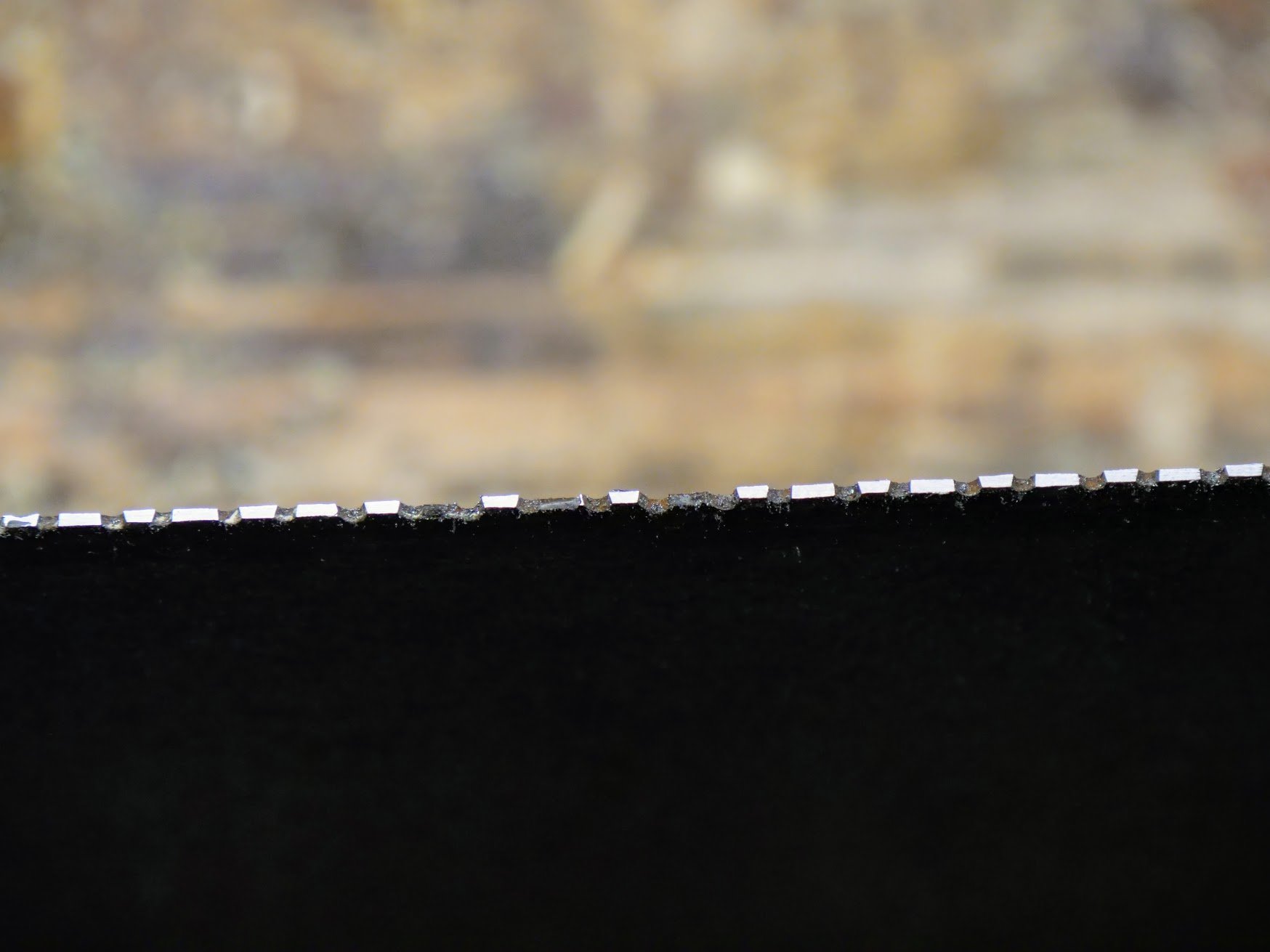 Five teeth were missing at this point but the teeth did not seem overtly hard as I expected. My next test for breakage cause was to remove the set by hammering the teeth back to surface level and out of set. 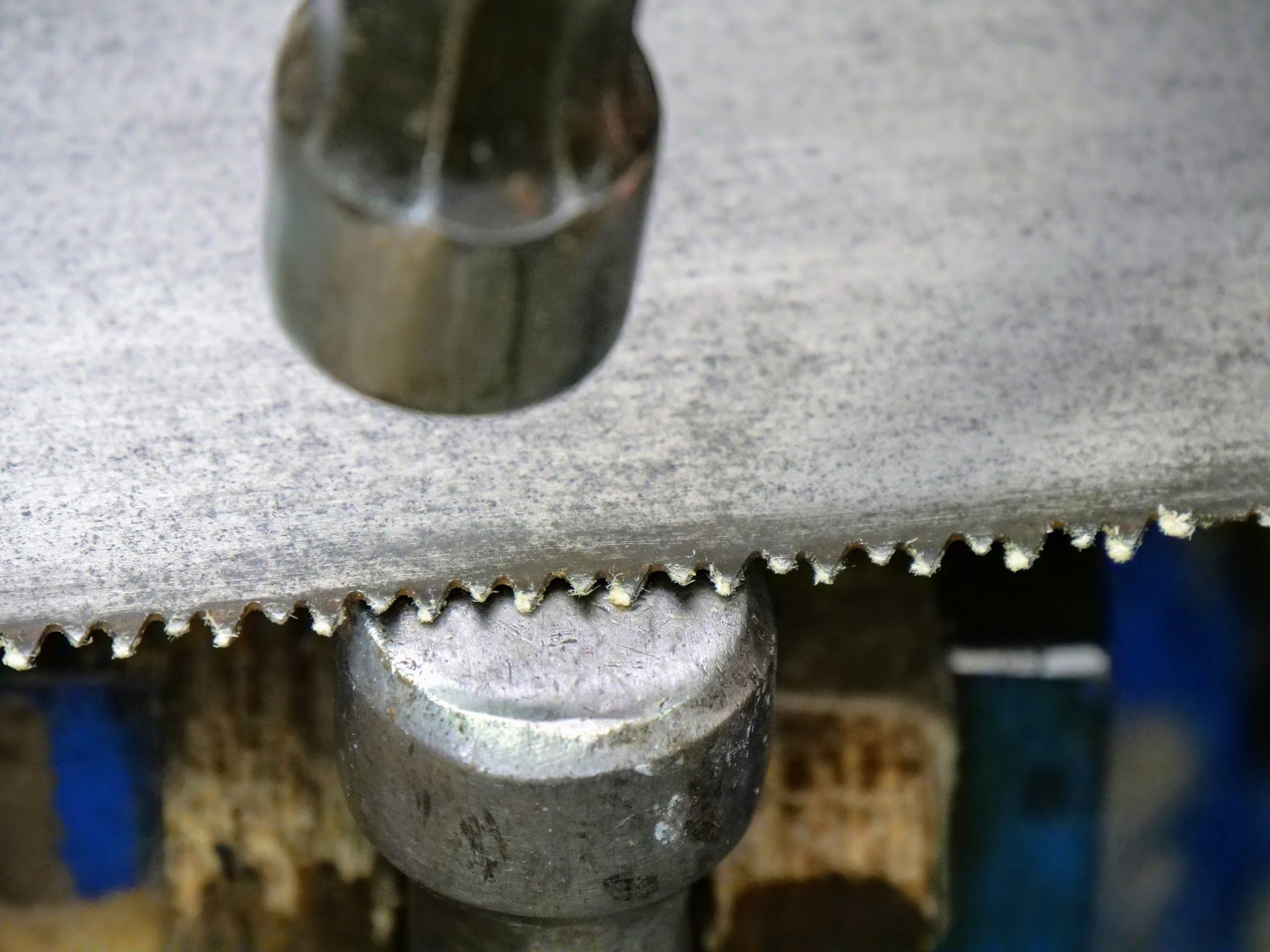 Straightening the teeth often results in more breakage and this at first thought is frustrating. Ping! pop! pop! pop! Oh, no! What have I done!?So there I was, 11 teeth broke off leaving me with no choice but to file out the whole and recut. The reason for the added breakage was the over set teeth. They were really fractured already as a result of the previous over setting, but they were hanging on. My straightening them was more consequential and not the actual cause.

Filing Off the Teeth 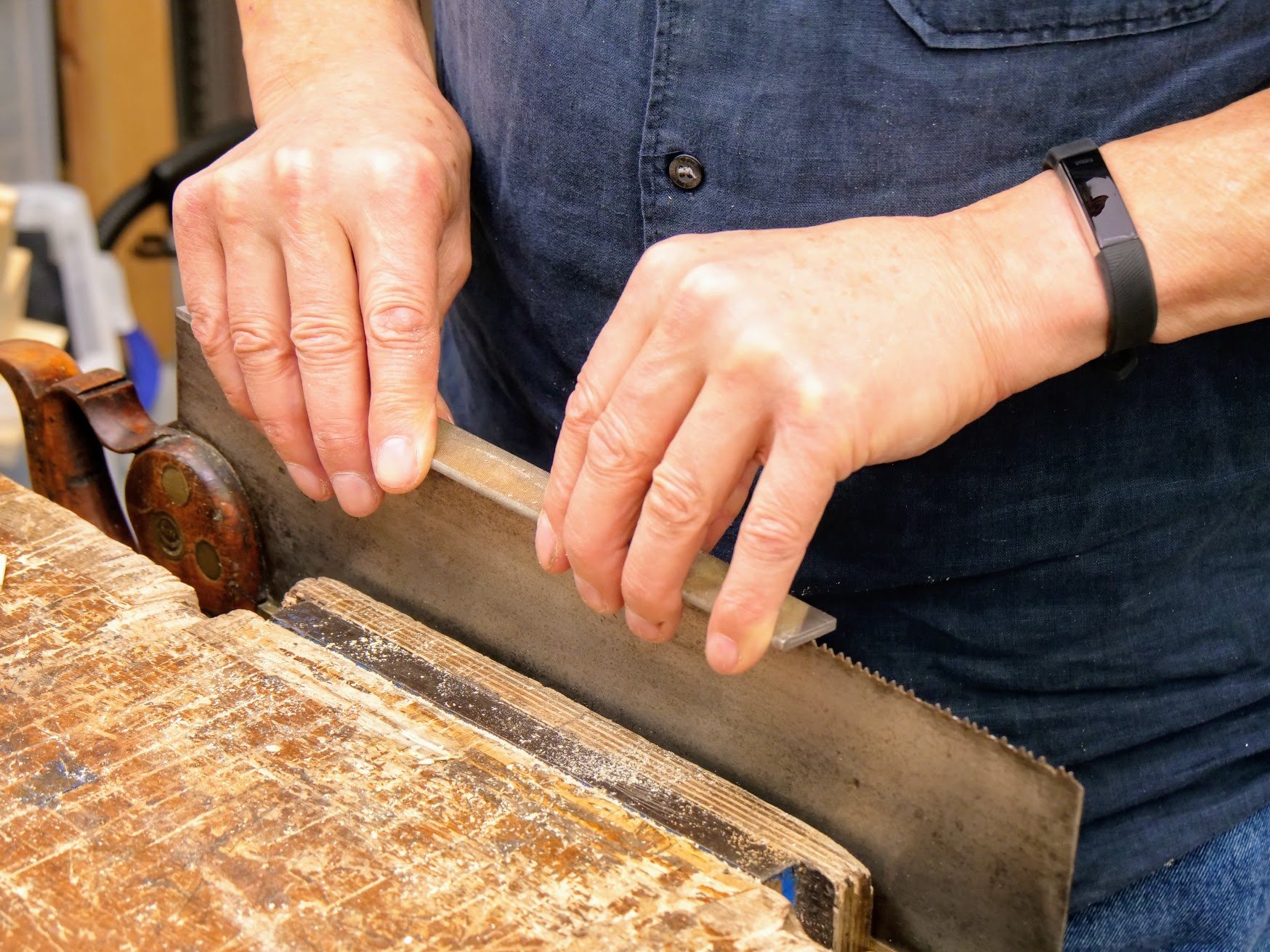 By filing off the teeth, within the first few strokes, I knew the hardness was fine, perfect in fact. After 20 minutes I was down to level. I used my hacksaw trick with incremental 1/8″ cuts in wood as a guide. You can see this on my YT channel here. 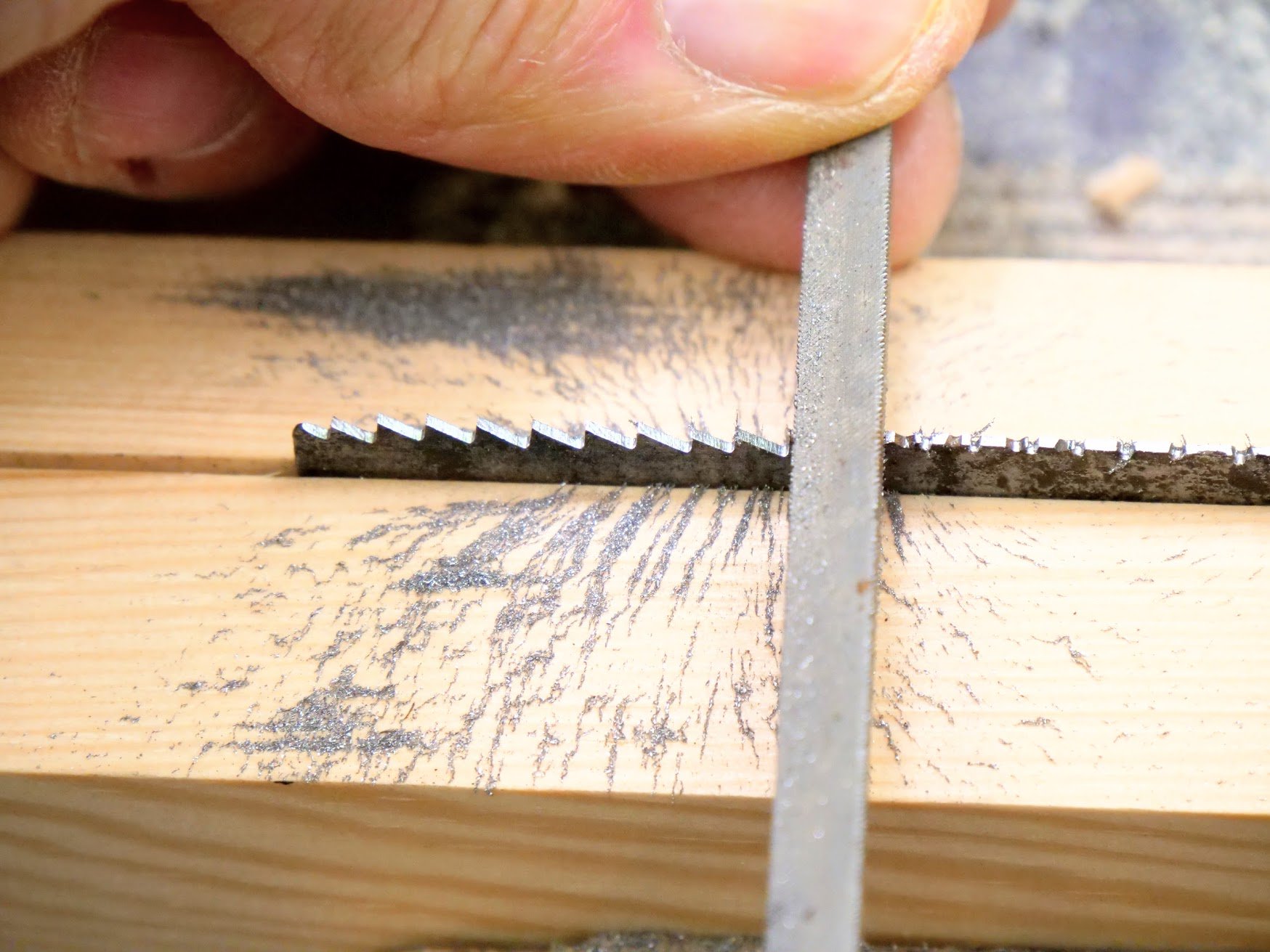 With the notches cut, my file dropped into exact placement for filing and half a dozen strokes to each gullet took me down close to final depth. This will vary depending on the hardness of the steel, the file and the length of stroke. Not complicated. 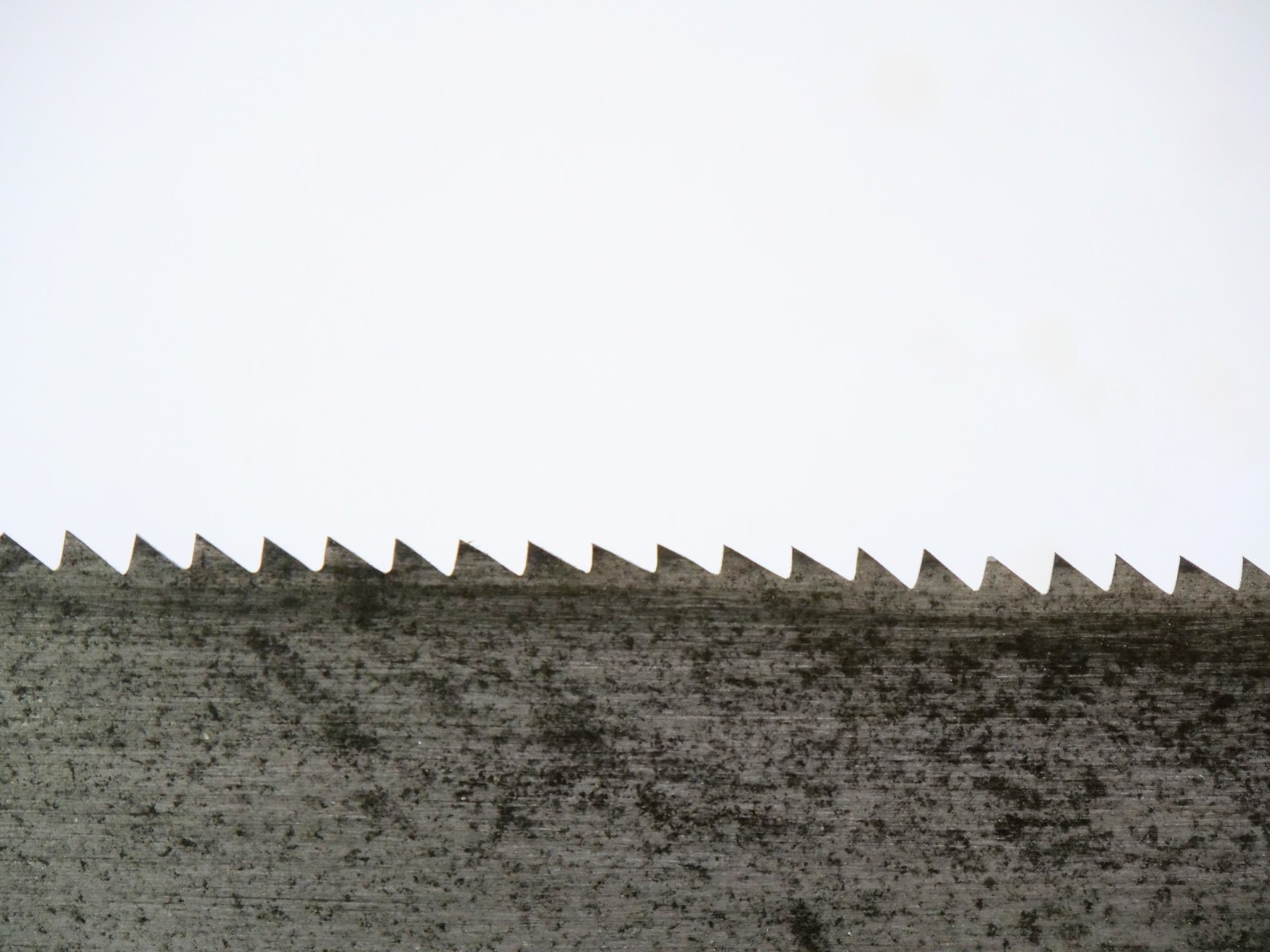 I started to recut the steel with a 5″ tapered file. With my wanting a pure, aggressive ripcut it was straightforward enough and very quick to do. Not tedious at all.

From here on it was just a question of setting the teeth and because they are large teeth I simply used a sawset on the shallowest set.

The Result is Incredible 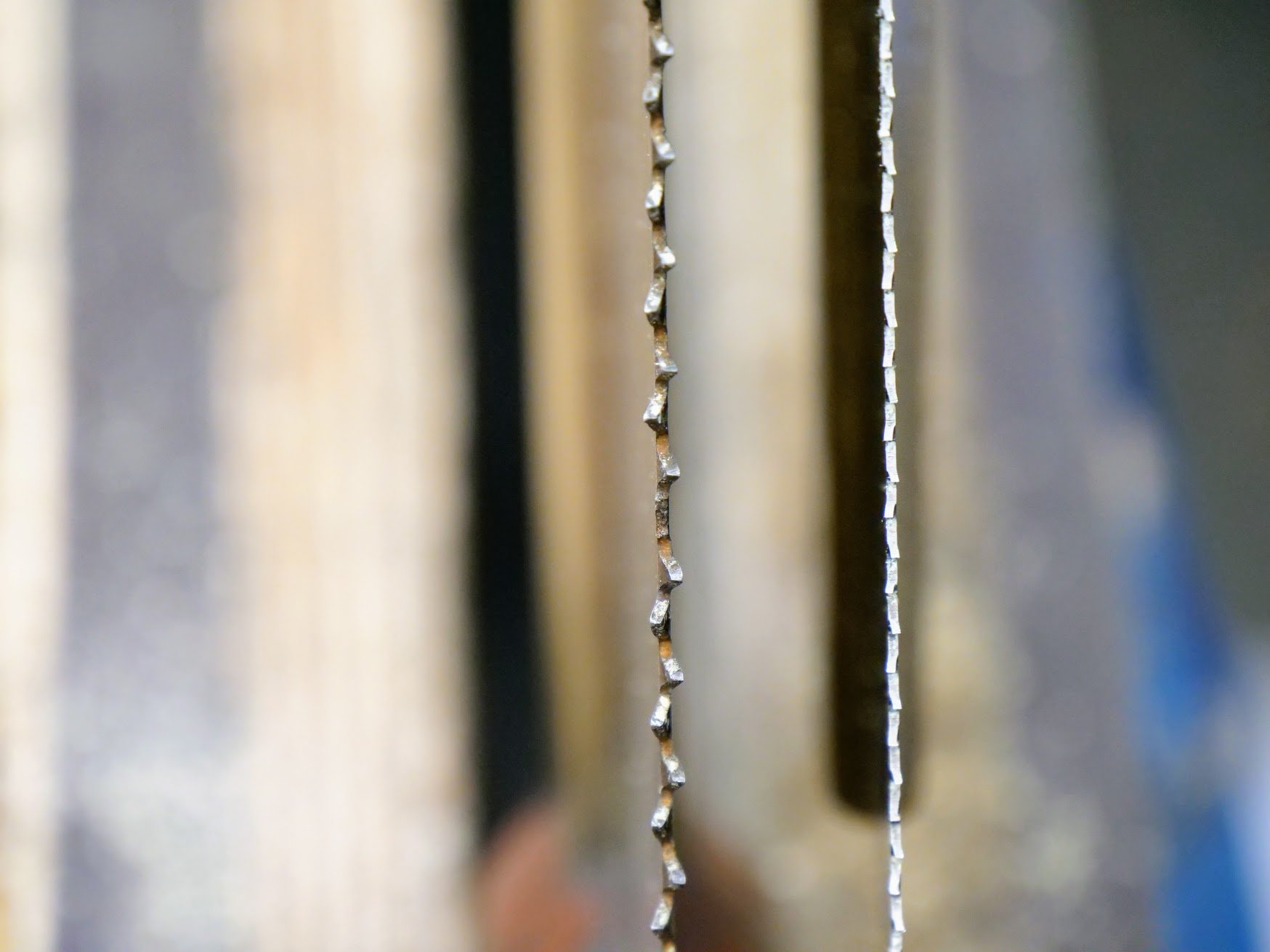 My saw sliced through the wood remarkably for about an hour’s work. It’s a lifetime saw from the 1800s and with a full length plate 4″ deep it’s good for a few hundred years yet.

Here are my tenon saws that I use on a daily basis. 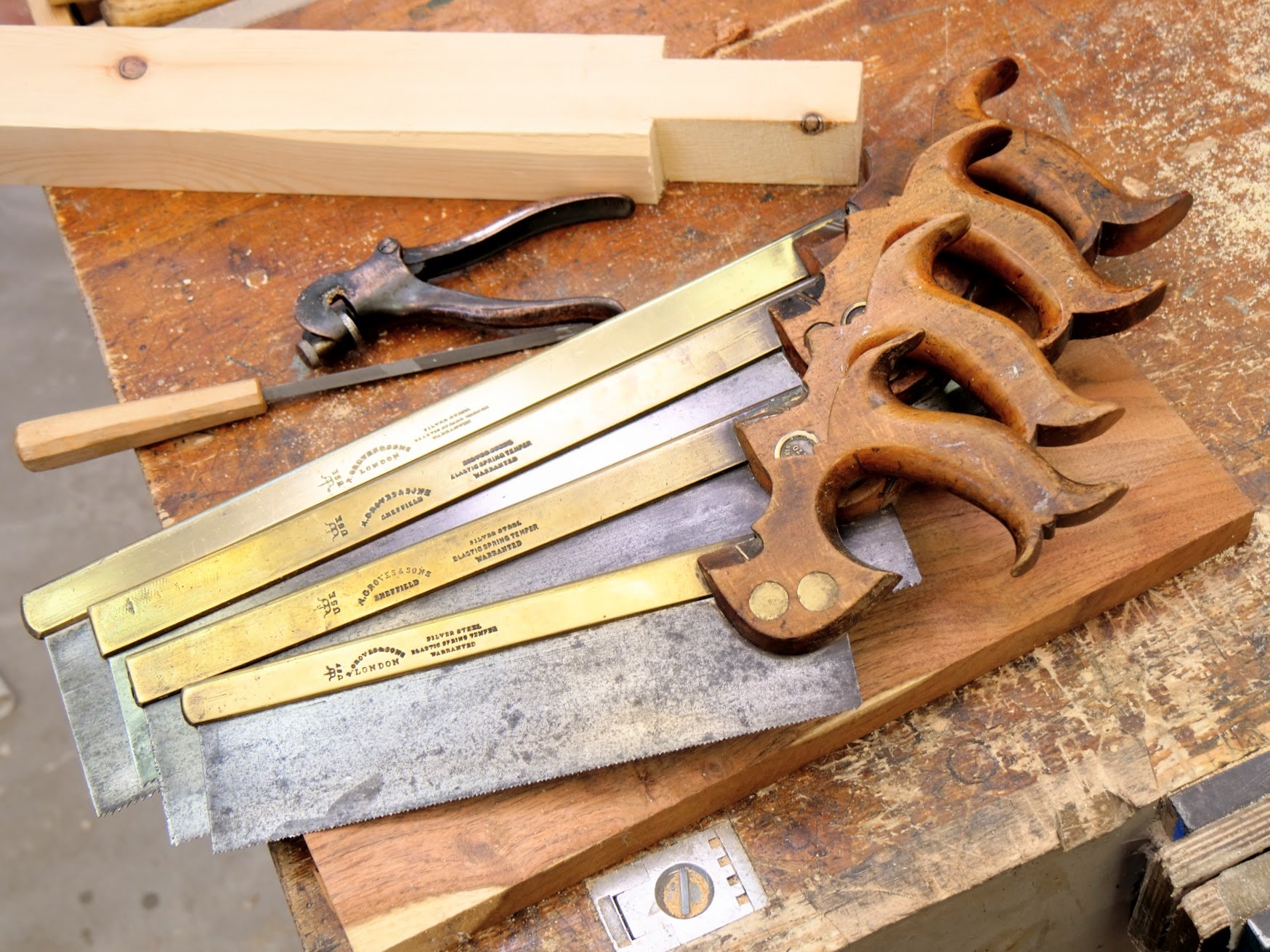 Here is my phone vid showing the saw in action: