It was an old bench, made of pine, too low for George on it’s original legs so he’d jacked it up to where it was tall enough for him but too tall for me. That was before I came on the scene. The bench was a good 8 feet long at least and two sided with the traditional centre well board for stowing tools in use. We made a quick duckboard using 2″ oval nails and strips of 1″ by 3″ pine for my side, to raise me up 2 1/2″. It ran the full length of the bench. It was a compromise for both of us and it worked just fine for me because I would grow three more inches over the ensuing years.

There was scarcely any part of the surface that didn’t have cuts and gouges into it from the tools. Even though it looked rough, when I traced my fingers over the surface it was surprisingly soft to my touch. The difference between my school workbench and this one was a century or more of use but then too the realness of it.

I am sure those hundreds of thousands of surface nicks and saw cuts were never careless or intentional. They would mostly be slips. I say that because a stock phrase from George was always, “Don’t cut into the bench!” Then he’d chuckle because the reality of the surface said different. I began to understand what realness was early on by working with George and the other men. A World war had defined many things for them and the return to normal life for them was their work and their families. It was uncomplicated. Simple. The simplicity defined complicated men raised in complex worlds. I don’t know if any of them loved woodworking like George and I did. It seemed as though it was more a job to them and they never spoke of beauty, shape, scents and tools. Perhaps they were older and more cynical. I could see the Ragged Trousered Philanthropists living in them y their choice of phrases, dress and the influence of working class culture. These things were training me also and influenced my views. It was my living in the USA that changed my perspective. I will always love America for the alternatives it provided me. My return to the UK had adopted many American attitudes that I will always be thankful for and love.

Though I had used a plane in school it was never truly taught to me as George did.It was a boy’s world in school so with around 12-15 boys in a woodworking class it was very difficult giving one on one. I used to think that more girls would have liked to do woodworking but looking at the percentages to day where they could if they chose to nothing has changed. Less than 2% women in woodworking classes is quite a difference. 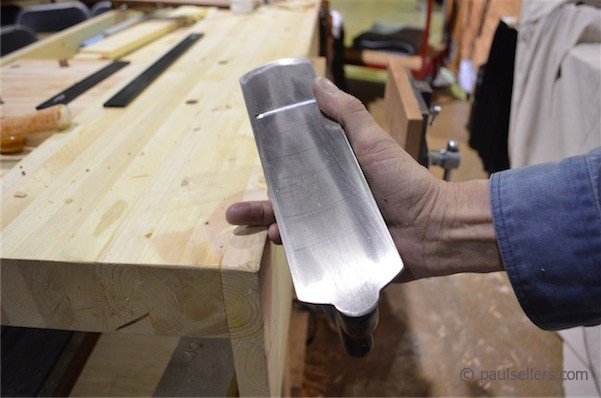 The dismantling of my first #4, the fettling and the scrutinising of every tiny miscast component. The filing and the levelling, the flattening and the sharpening but then too the removing of hard corners, the sole treatment and the ‘rag-in-the-can oiler. Though I was using his plane for a long time I still ran my new one alongside until it was “broken in” as George would say. I still like the curls and bands rising up from my planes. It’s nothing more than realness and even etherial and not etherial at the same time. I think we have gone too far in the other ditch today and made sharpening a luxury issue where some can spend an hour working to sharpen a plane when it takes only two minutes the get the same edge. It’s become a conversation piece of work when for me it has always been just essential to my working. I like realness not play acting to an audience, something ‘interesting poor’. 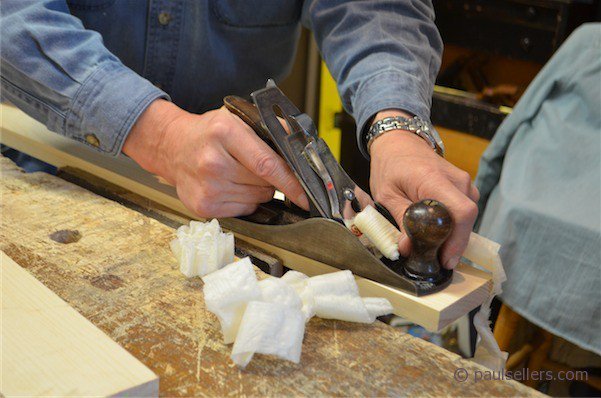 Never the less, the plane gliding in the realness of working for my living added a new dimension. No digs and gouges or torn grain was allowed no matter the wood. The plane, the #4 plane, had to reconcile all things and I learned to twist and turn according to what I sensed through the tool. It was soon evident that George had his work cut out. A tear would cause many rolls of the eyes in a given day.  He’d walk around the bench and use his plane like an eraser, rubbing out my flaws and then demanding I plane it again but without the tear. By this I learned that the plane was not a road grader or a bulldozer to force wood into compliance but a finely tuned instrument similar to a multidimensional stethoscope and sensor through and by which I must tune my hearing and touch to change what was otherwise impossible to change.  George was a patient and kind man. He taught me to respect all things by this nature. This is how we raise our children, live with our friends and work with our colleagues. This is how we make every piece of wood fit into its cohesive whole, form beauty, shape the world. Who can argue with things such as these. 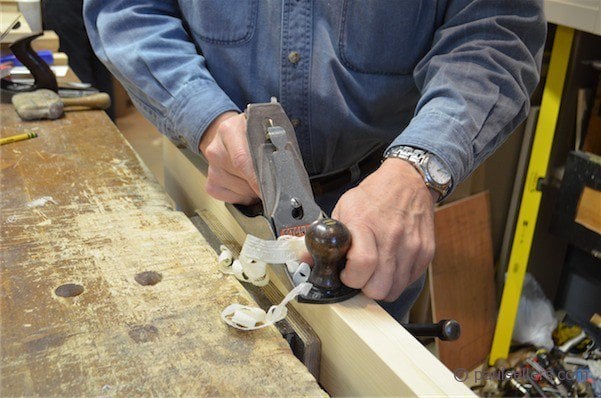 My workbenches have become the same as George’s through the last five decades. Unpretentious, marred, functional, working. There is always the new stage, when all looks pristine and then there is the worked phase where knocks, marks and gouges have occurred in the working on the bench. The in between is the part I like the least, when it has so little character. It’s funny how you can recall every slip you make that records itself in the benchtop. There is an intimacy to it you see. A little romance perhaps. But the romance is the working of the wood and the servile workability of the full workbench. Then too there’s the vise. It’s rugged strength. It’s sensitive hold and its firm grip and all stages in between.

← Two Variations On a ThemeNot All Planes Are Created Equal →