I didn’t need another saw but I had good reasons to buy it—this one at least. It looked lovely. It caught my eye by its proportion. More than that even, it looked like a working saw and I usually only buy working tools. I am coming to the end of my own buying of tools. 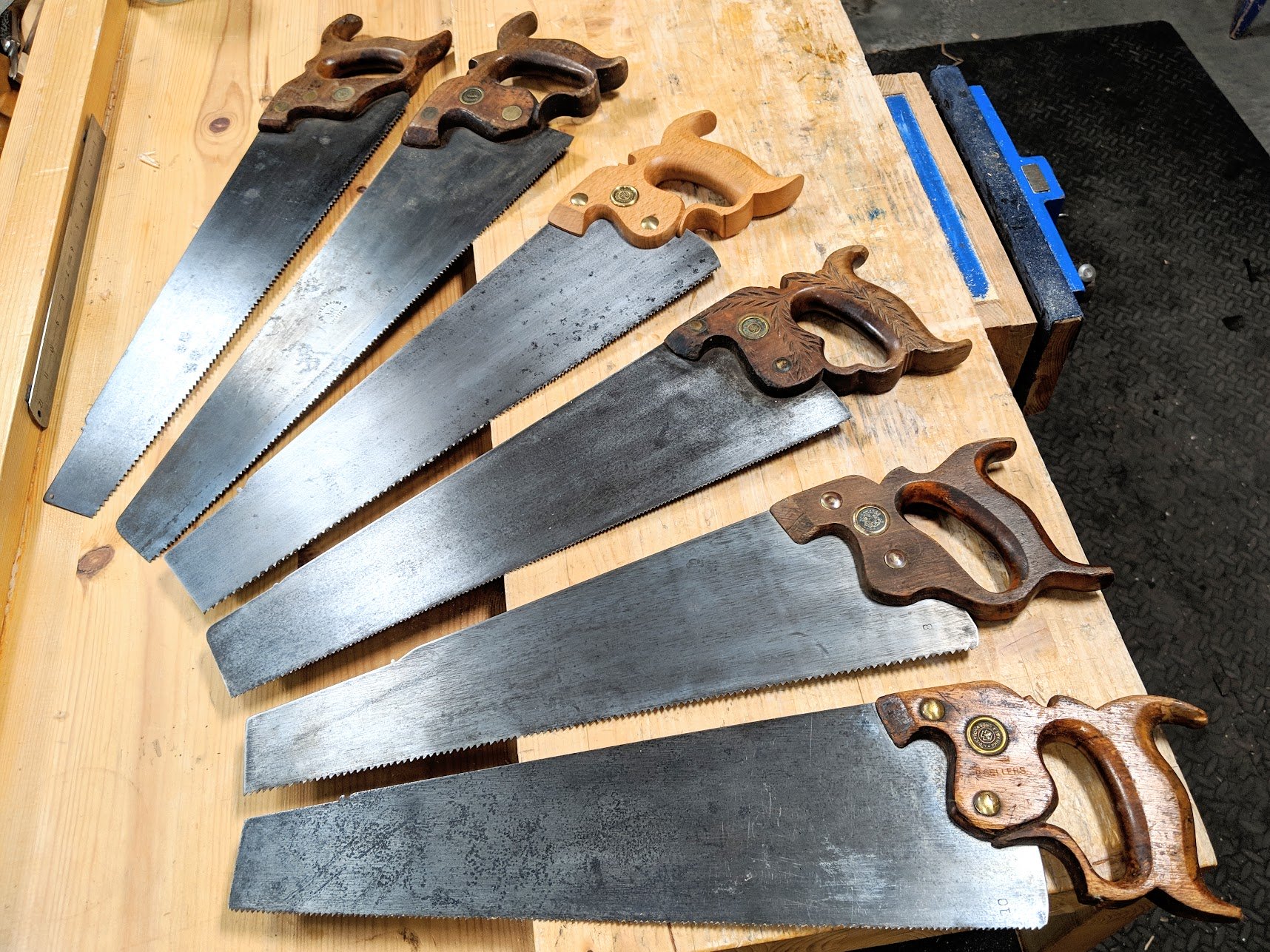 Perhaps `i just like the old models but actually  they still give best value for money and no new maker has surpassed what’s out there for very little effort and very little money. I am surprised that none of them have come up with 16″ series. They are perfect for any size of person including teenagers and people of extra small stature, which I am not. Course, I am not looking for showpieces, ergonomic designs with plassy or composite resin-poured into moulds to make soulless handles. Because I’m a woodworker I want good working pieces and wooden handles seem always the very best to me. Then, even more though, this saw, third from the in the top picture, was 16″ long, an older Henry Disston & Son model, and the handle looked just lovely. You see 16″ handsaws are rarer now, almost “scarce as hen’s teeth.” (Texan saying). I recall buying my first Henry Disston & Son 16″ one that was etched with the name Hammacher Schlemmer & Co New York City 1848. for just £10 on ebay. It’s a lovely handsaw to have at the bench and indeed it is a very responsive saw to work with. When I first sharpened it up I was stunned by its punchiness, and gutsy performance because I thought the smallest size suited to woodworking would be 22″. Its short length means that direct thrust delivers the teeth to the wood with short shrift and in similar fashion to a brass-backed tenon saw but with unlimited depth of passage. Once I fettled it it opened my mind to the reality that short saws have true purpose. Certainly not a boy-toy of old as some erroneously say. Thankfully, back then, they were thinking differently. No “big boy toys” or Prizecut toolbox saws, Ergo and, stupidly, Cobra and, even more stupidly, Barracuda cut saws. Such is the condition of manufacturers creating terms instead of cut quality with longevity. What’s nice is the saws I have shown were utterly ergo designed for cutting at extreme levels of efficiency to speak nothing of them having been sharpened and resharpened a thousand times so that they lasted 150 years and without plastic. How good is that? 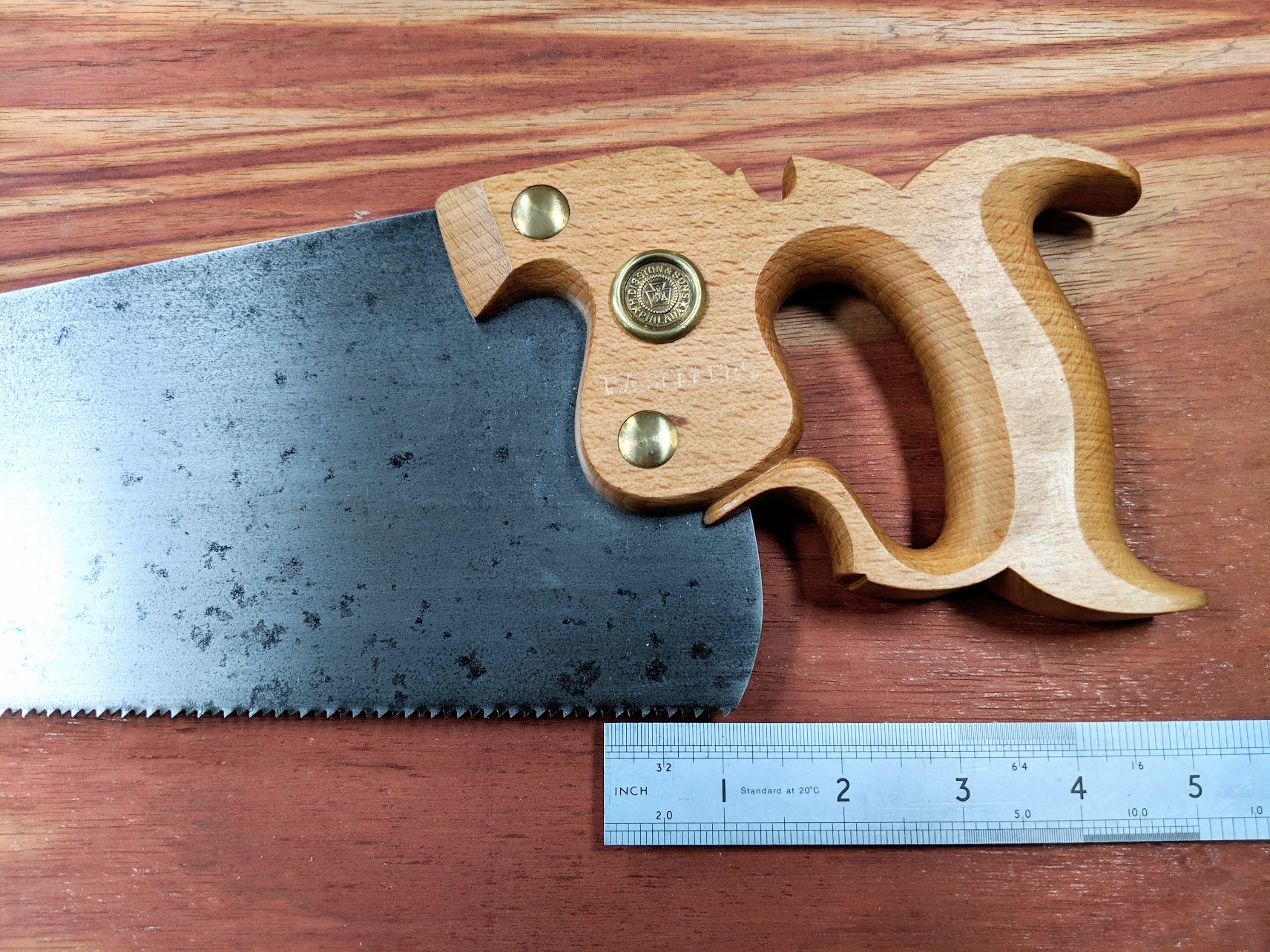 The one I bought this week is an altered plate cut to 16″ from a vintage Disston D7. It cuts beautifully and the 10ppi teeth are a combination cross-, rip-cut for dual cutting. It has a 10-degree rake with 10-degree angle to the teeth. It cuts well both as a ripcut and crosscut and so is a handy saw to take with you when space is tight in your luggage. 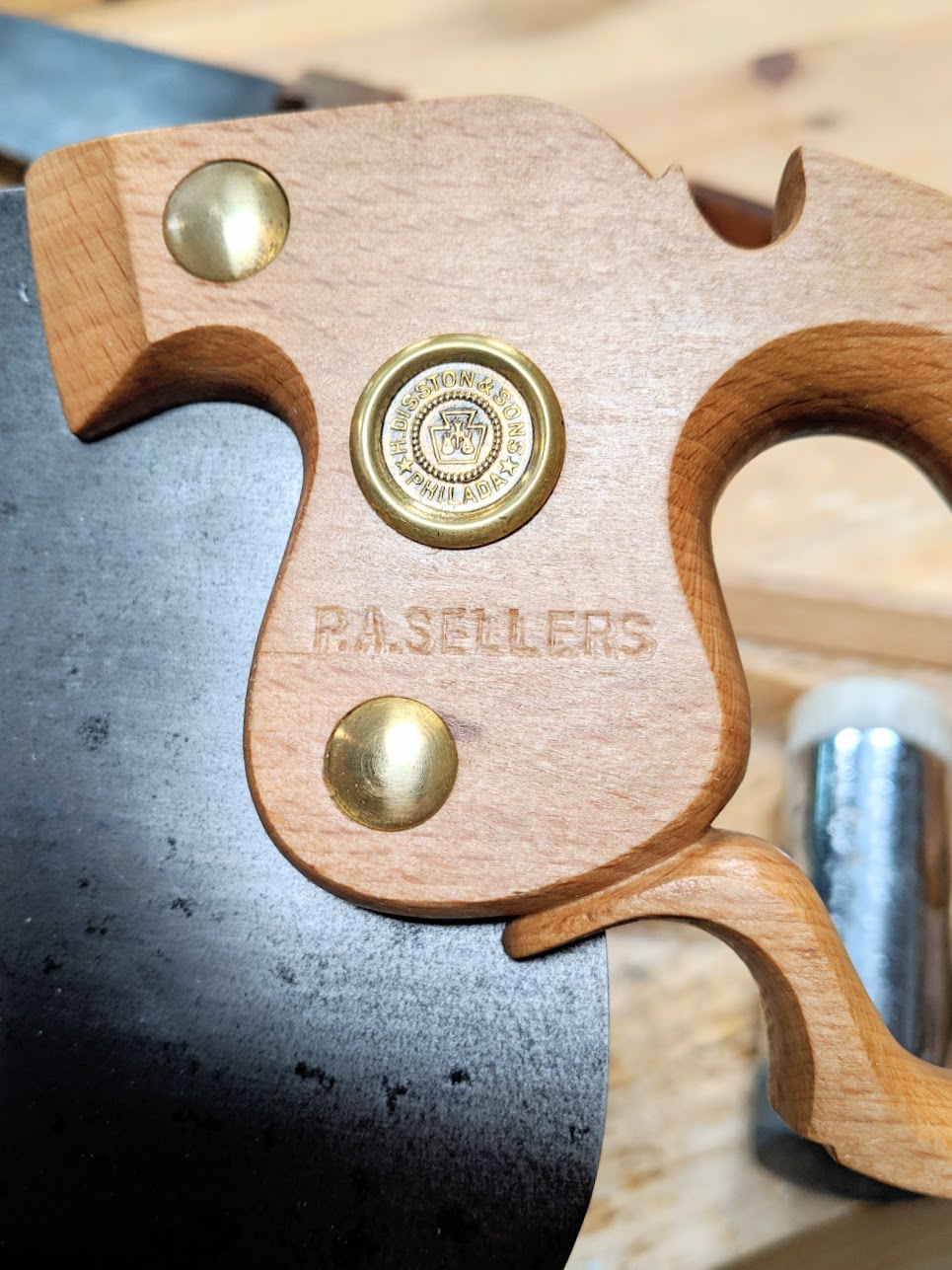 16″ handsaws are really fine saws for benchworking wood. It’s the compact punchiness mostly. Short, sharp and strategic the flex readily as needed and think they are big. My saws have different number of teeth per inch. Any duplications with regards to points per inch enable me to own a fleam-tooth crosscut and then a ripcut too. I know, it’s a luxury. Whereas my collection generally cost me very little. They are probably worth ten to twenty times the price I pad for them. But I still want them as users and not to just sit pretty. 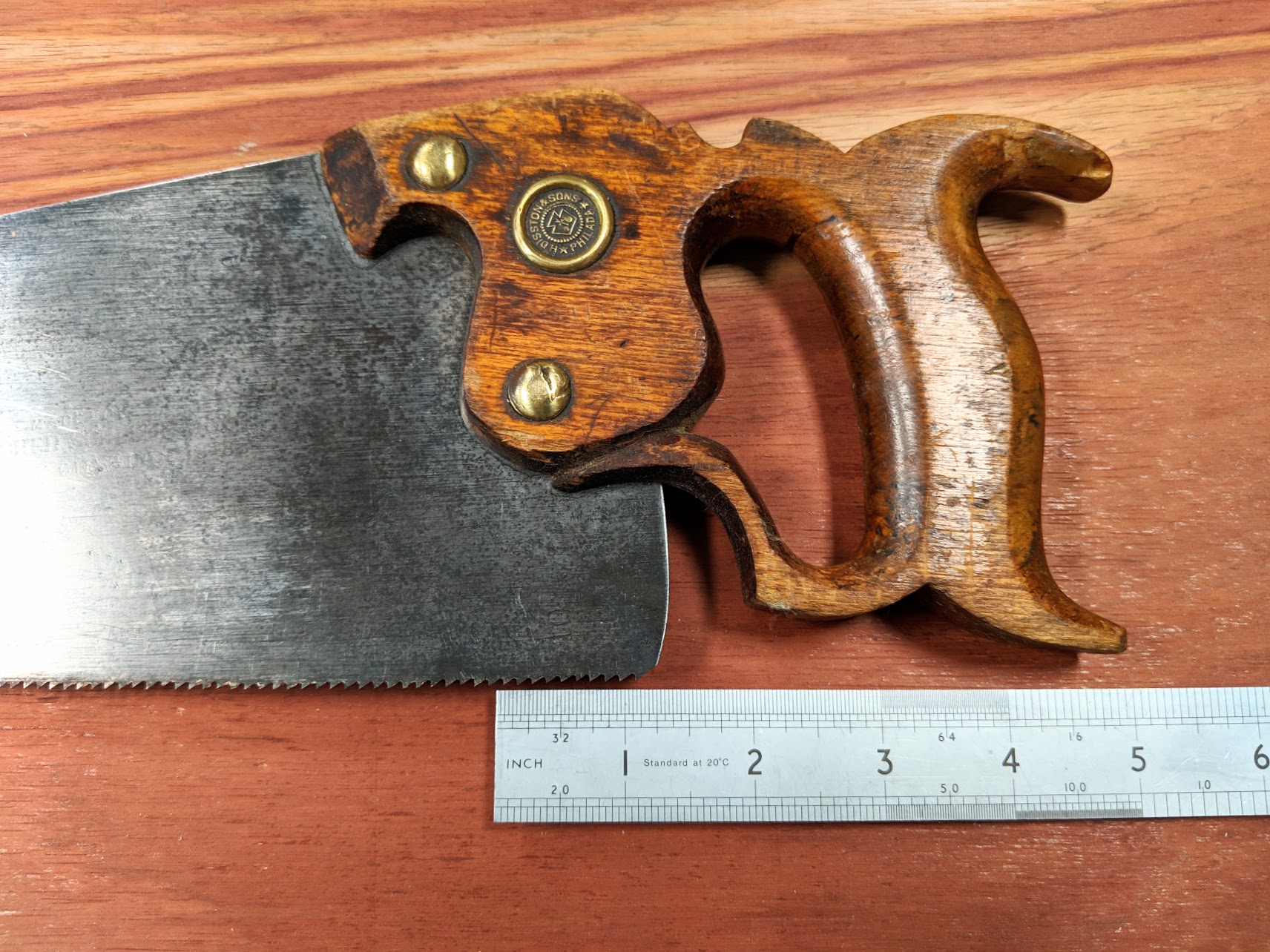 I bought the new-to-me saw on ebay from a man who sharpens and restores saws. Jakob runs his saw restoration  business as an independant restorer and sets and sharpens his saws by hand. Adding it to my chosen saws completed the ones I will use for the rest of my life. They will work alongside the two newish Spear & Jackson saws I have been recommending for the last few years. In some ways, mostly I think, it was the thought that Jakob had hand shaped the handle from scratch. It was an urge to support an honest maker that replicated the classic Disston handle Disston was  once know and respected for. 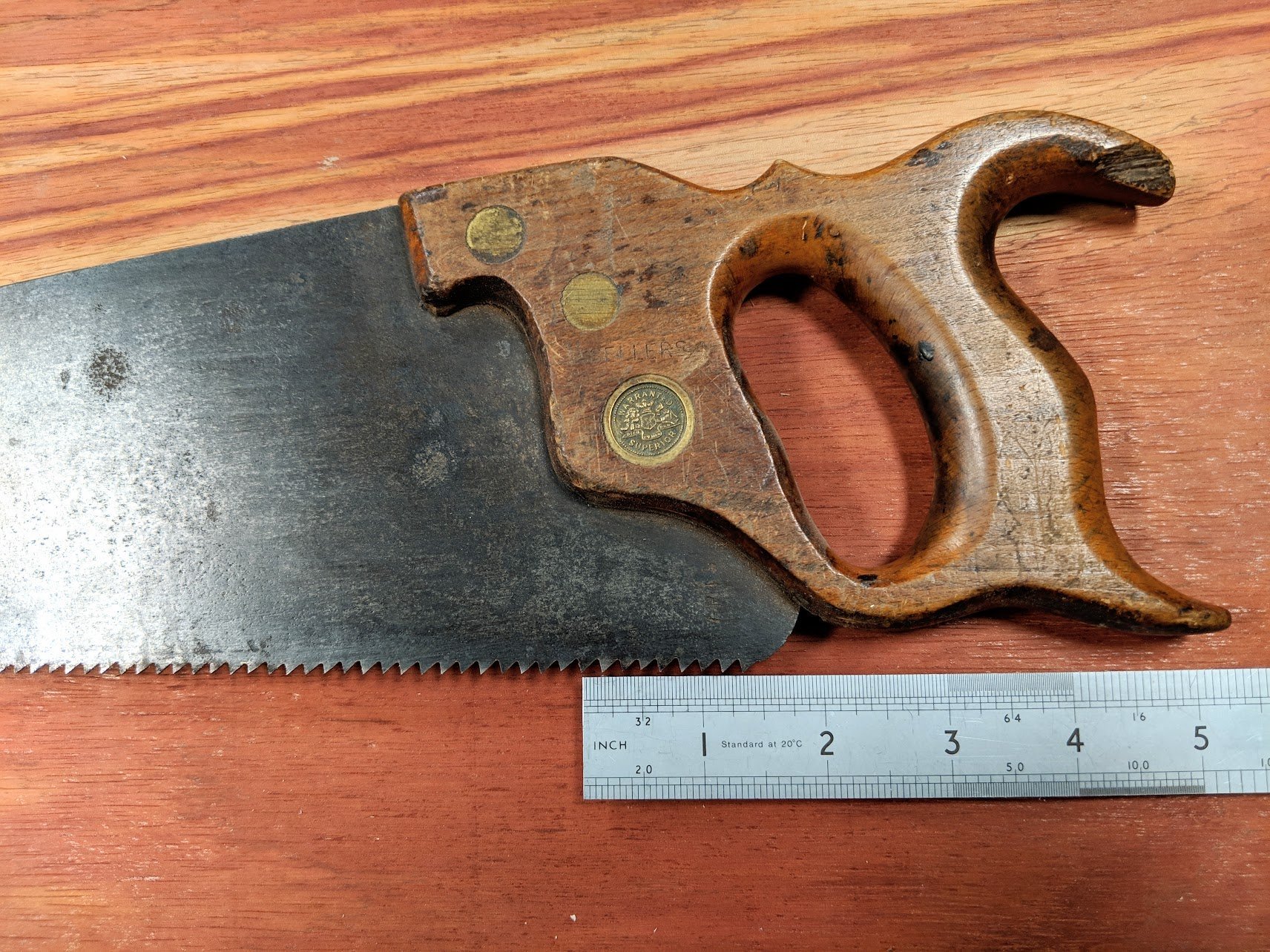 The men I worked with as a boy swore by the Henry Disston saws of old. I do now too, even though I would never port with my R Groves saws. It’s the support of something unpretentious I think most. This saw would last a user like me for a hundred years or more. Imagine such a thing in an age when new saws last for a few weeks of use and are thrown away. Shouldn’t we be thinking long term and learning to sharpen in a day when even science admits producing something that is so damaging?