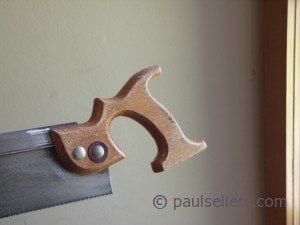 finer tools than we do in England. It really began to happen in the post war era when the real austerity of the war years changed the quality of hand tools in Britain forever. Here is an example of what I mean. I took a clunkish tenon saw I bought at a flea market for 50 pence (75 cents US) and spent an hour reworking the handle. The steel was good quality and so too the beechwood handle. The before and after shows the contrast.

There was at one time much debate about the better 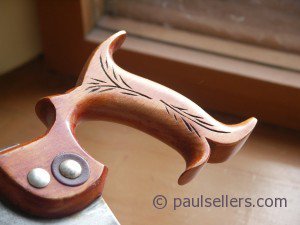 saws being those with the brass back. Fact is one looks better than the other and the brass backed saws were a little heavier. But I like the lighter weight of the steel backed saws, which usually have thinner blades too and so I like them for finer detail work, especially dovetails. They glide effortlessly into the wood and slice wafer thin slithers to leave a superfine saw kerf.

Yes, I know it’s hard to believe this is the same saw, but what’s even more amazing is the fact that, custom-shaped and fitted exactly to my hand, the saw’s attitude is drastically changed and it actually cuts powerfully too.

1 thought on “From clunky to classic saw handles”