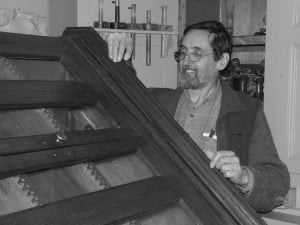 Leave your space for a season, with others working around yours, and soon you’ll find your neighbour extends his and her comfort zone into yours. This reflects a lack of respect for one person’s space by another or others. If one picks up the tool belonging to another, respect is diminished. A man’s tools are his. They are an extension of him and no other has right over them. To use a tool is to exert rightful ownership over the tool.

As a boy apprentice, a workman was taken suddenly sick. Other craftsmen working alongside him took care of him and then placed his tools carefully in his tool chest, closed the lid, locked it and hung the key on the nail concealed beneath his bench vise. The bench and floor were swept and cleared of shavings and sawdust. Weeks passed, no one touched the workspace again until he returned. His tools were sacrosanct and so too the space within 6 feet of them. His reoccupation revived the inactive space to its former sphere of creative space. Life filled the temporarily diminished place once more with vibrant active work alongside the drawings placed by tools on the benchtop. Shavings of pine and oak mingling with Russian redwood covered the floor once more and all those around found heightened morale by his simple presence: His occupation. 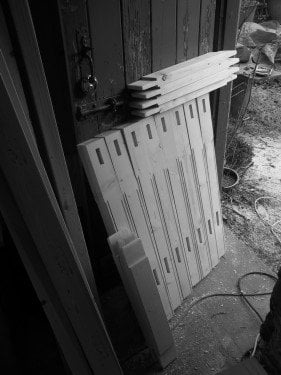 Workspace is the sphere a worker occupies in work. Occupation is a sphere of two distinct aspects of life—time and space. We often diminish the occupation of a man to merely the job he does, but a man’s occupation comprises the jobs he does in a given day, week, month and lifetime. Time was when a man worked the land and occupied his place of habitation encompassing the land and the garden he worked. So too the field, the woodland coppice, the simple buildings and such. This occupation relied on both aspects of his physical and mental presence managing and working the sphere of limitation by his occupying. We ask, “What’s your occupation?” We’re asking, “What occupies your time, your mind, your very being?”

Craft work is not what we do to earn money, but more significantly what we feel an ‘inner calling’ to ‘be’. Craft work and working is an occupied place of ‘being‘ this or that work-person. Work, regardless of the craft or trade, is our place of occupation. We move aside the domain of random wildness to possess and create a sphere that enables productive creactivity combining the two spheres of creative and reactive work to occupy and fulfil our vocational calling. Anything less is the merest condition of the mundane and dull. My work lifts my spirits indescribably above the bored mundanity of a mere job to heights beyond a physical constraint.

The cabinet above is Georgian, a period in British history between 1714 to 1830. It’s a cabinet made some time and some where between 200-300 years ago. In some ways it’s not ‘pretty‘ and in others, well, I find it functionally attractive. A customer bought this piece for £350 (about $500 US). I glimpse the panels and trace my fingers over the swipes made with a beech jack plane; un-sandpapered, crisply undulating stripes lying side by side across the faces. I marvel at the smooth softness of the beeswax finish and the length of time this piece has stood in the corner of a room. The maker’s work lays across my bench for restoration and repair. I touch up and tint, cut and saw out the powder post beetle’s powdery runs until all trace is gone. 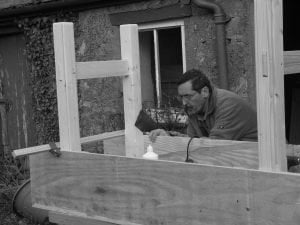 These legs stand by my workshop door and were made into the leg frames of benches I made for my woodworking school. My tiny home workshop was too small to assemble them indoors so I made them in the yard and stacked twelve of them up under a tarp before I transported them to my Penrhyn Castle workshop. It was hard work because snow fell from time to time, but I found my wo work so rewarding. The yard, back then, for me, was my creative workspace. “Occupy until I come,” a man once said.