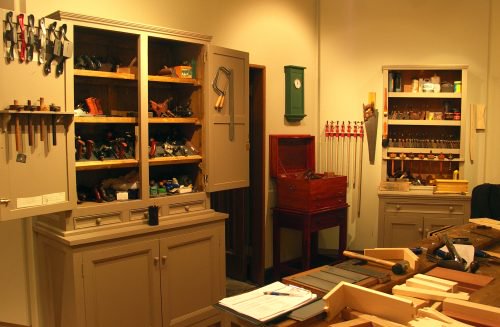 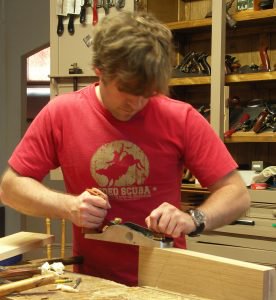 In the past Paul’s blog series I have covered much information about creative workspace and the sphere of creativity and hopefully you can now understand that core to creativity is immersing yourself in the work at hand using your personal hand tools. I read many articles on hand tools. One I recently saw held statements that undermined the fact that skill is available to anyone willing to invest the time to learn and practice. Parts of the articlle read as follows: 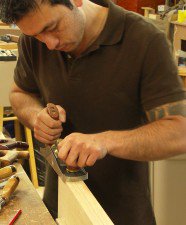 These are new planes made by Veritas. Skill comes together quickly with good tools

“Beware romanticism…there is a downside to this romanticism, this misty-eyed view of woodwork.” He was describing those with a penchant for mastering hand skills with hand planes. He went on, “It’s important to remember that planes come from a slower age when the progression towards competency was a steady, graceful passage with plenty of guidance from your elders and betters, living and breathing the tools of your future trade between making tea and sweeping the floor.” Now in my experience as a craftsman of 46 years, that wasn’t true at all. Craftsmen were under tremendous pressure to produce their twelve dovetailed drawers replete with hand-cut dovetails to all four corners of each in a day, or their five bar field gate in ten hours from rough cut solid oak stock fully fitted with hinges. 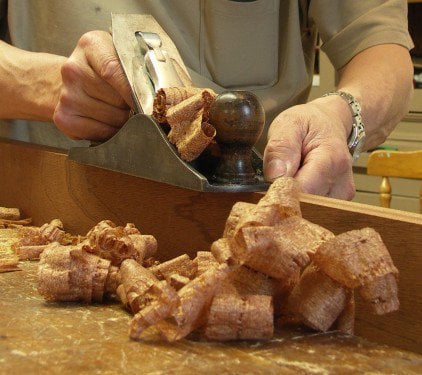 I wondered just what kind of romantic fantasy world the author spoke of. There was nothing misty-eyed about my apprenticeship when I picked up my first plane either. At 15-years of age I was expected to be competent with the plane within a few days and competent I quickly became. He decries hobbyists as “…expecting to hit the ground running!” yet out of the thousands I have trained that has never been the case. They genuinely want to master skills and, because of their dedication and determination, master them they do. Now this author is an advocate of using machine only sanding methods to get the results you need. I can only presume that perhaps he achieved less skill than his so-called hobby woodworkers did, I don’t know, and perhaps that’s the reason he is so passionate about opposing the mastery of true and competent skill. There is no arguing with one simple reality and I have never heard anyone counter this; that the finest work ever accomplished by craftsmen came in the pre-machine age and certainly an age when work came off the tools edge and not extremely costly abrasive papers. Not everyone spends “several hundred quid” (pounds UK) on newly made planes from high-grade makers either. Most students and enthusiasts I know bring in old Stanleys and Records rescued from the boot sales and the cellar hoping not to spend more than the couple of quid they bought them for.

My hand plane is an old 45 year old Stanley I bought new ..Its just about at its best now

I worry that some might read the article and believe what is written as fact and that what he says about using hand planes being difficult was true and that it is basically romanticism to think that we today can gain very much from using methods from a slower, more graceful passage of time. That was not true at all. The writer stands there in his workshop where there is only minimal sign of dust extraction tubes when the reality is that sanding dust is incredibly harmful and even with the best dust extraction system, using the equipment he shows there in his shop, he cannot collect the harmful dust that never reaches the extraction points of the machines without more enclosure to them. He has no sign of breathing apparatus, dust masks, face shields, ear protection or anything else. The parallel of abrading with cutting machines is stretching it to extremes too. Isn’t this all a bit, well, romantic? I could go on. Especially after I read lines that said, “avoid slavishly bowing to the tyranny of the traditional”, and “planing can be a joy and hugely therapeutic.” What tyranny is he talking about.

I came away from it feeling how deceptive it was. One thing I noticed was that part of the article input said that his (the authors) sanding efforts led to tighter joints. Just what are these joints in question? Surely they are not saying he can make mortise and tenons by abrading with abrasive papers? Or cut dovetails or fit them by abrading? That’s not true. If they are saying that he can get a cleaner joint line between two edges of veneer by using abrasive paper rather than the cutting edge of a plane, then that’s not true either.

I often wonder just who it is that’s living in the romantic world of nostalgia if anyone must wear a dust mask for endless hours every day and have machines grinding away to substitute for developing skill. Surely this makes anyone wonder where the true tyranny lies in fact. No on can responsibly say that this is where we should put our children and new woodworkers can they? That has got to be the most boring thing I’ve ever heard. It’s no wonder reintroducing hand skills that were once common to all universally, and should be the inheritance for all young people, is such an uphill slog for us when people present information in this way.

You must guard against those who disparagingly oppose the possibility of your developing real and substantive skill and offer nothing more than clumsy jigs and no risk. That’s where the joy comes: through self discipline and overcoming counterproductive statements. Your sphere of creativity comes by faith that with effort, you will become competent and confident.

Beyond all of this. Go on, share your creative workspace with others. The results are staggering.

2 thoughts on “My creative workspace”