Unbelievably busy today, meeting old faces (and young ones). It’s a different show than The Woodworking Shows that travel the length and breadth of the USA in that it appeals to the high output manufacturers as well as the small hobbyist without having the hobbyist suppliers there. I think there would have been high sales for hand tool suppliers had they been there simply because there was no competition. When they came by the booth I had no one to recommend them go visit at the show as there would have been at the The Woodworking Shows. No Lie Nielsen, no Veritas, and everyone else selling machines only pretty much. 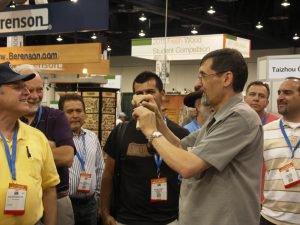 As you can see, our booth was packed every time I began sawing with a handsaw or planing with a plane. People loved it. My now 1 minute 55 second dovetail was well received as was the inlay I have done for 24 years now. The free giveaway DVDs are going fast too and promised pre-orders before August 25th discounted at show price seems popular.

I walk around the show and wonder still if this is still considered woodworking? So many wandering the aisles and then, suddenly they stop and stair at our booth and wonder if this is even possible. They step up to the bench and watch a handcut dovetail go together for the first time and suddenly think, “Yes, we can.” I inspired them with all kinds of thoughts with many responding by promising they are going to fly to the UK to take a package of a weeklong workshop. 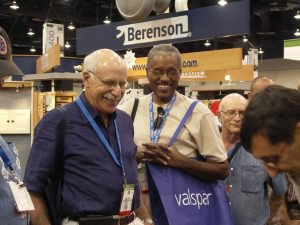 Wouldn’t that be something if we could have a package deal of a week in the woodshop with a few days either side spent in our beautiful North Wales with castles and mountains as the backdrop.