Tapes as a rule for woodworkers 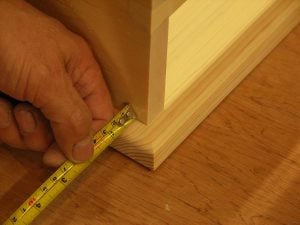 It is hard to get romantic about retractable measuring tapes, after all, they are about as utilitarian as it gets. Tape measures have replaced rigid folding rules because of their convenience, and tapes are more accurate today than they ever were, so even low-grade tapes are generally quite accurate. Tapes are also better made and if used carefully last indefinitely. Metal cased 25’ tapes used in carpentry are generally unnecessary and too heavy for benchwork, but on a roof you can’t live without them. I prefer the cheaper plastic ones, which are lightweight and strong enough for daily use. I use cheapos from B&Q here in the UK and also cheaper Stanley tapes with plastic casings. They last for years as long as they are not overstressed by misuse. Because I carry them in my pocket I want something unobtrusive and these go unnoticed most of the time. Oddly enough I actually grow fond of the tapes I use in my daily work, even though they are quite ugly tools compared to others.

The origin of the word rule or ruler is in the definition, “ that which controls, guides or directs.” So it makes sense as a rule that we govern most of our work by measured components that in turn have measured joints that interlock by measured joints cut to fit accurately inside one another. Tapes offer great versatility over rulers by virtue of their length, lightness and overall flexibility. These are qualities I look for straight off, but I further consider their strength, consistent unrestricted extension and retraction, clearly defined markings in metric and imperial divisions, easy locking device for lockability and an accurate self adjusting hook at the start of the tape to cater for internal and external measuring, which must be accurate in its allowance for the thickness of the hook. 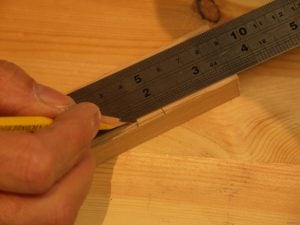 I also use steel rules at the bench, which I like because they stay flat and unlike tapes they provide the rigidity I often need for some methods of measuring. A 12” is adequate for all of my work, but another aspect no readily considered is the thinness of the rule as apposed to say the rule on the combination square. 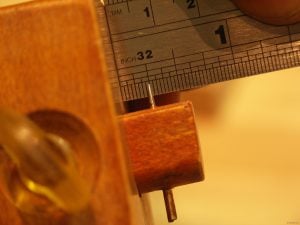 I keep the steel ruler close to hand for quick, localized measuring; much of my work is checking short distances and close work such as setting gauges, checking the depths of mortises, setting tools such as plough planes and fillisters. The definite start and stop is critical to close work 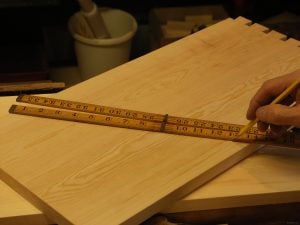 As an apprentice we never used tapes, always a 3’ folding rul. I actually used the one I bought as an apprentice in 1965 all the way up until a young colleague broke it in 2002. Just one of those things. I actually owned two and one Rabone-Chesterman four-fold I still own today. I keep another on the bench for occasional use and find it handy to have for some situations like checking diagonal corners when squaring a project. A 3’ rule is still very handy and actually takes care of most of my needs because most benchwork in furniture making is working stock and components less than 3’ long.

Makers made two types of four-fold rules in three sizes of two-, three- and four-foot sizes. One was a finely marked and was preferred by master craftsmen on benchwork, the other was more heavily marked and was called a ”blind man’s rule.”

In summing up my thoughts and feelings the conventional tape has replaced the need for all other measuring devices to become the one-size-fits-all rule. They will last for years with careful use and lightweight plastic ones will adequately take care of your everyday needs. A six- to ten-foot tape will handle most measuring tasks and most hardwoods come only in 8- 10-foot lengths.

Steel rulers are convenient at the bench and between these two you will have all you need for measuring.