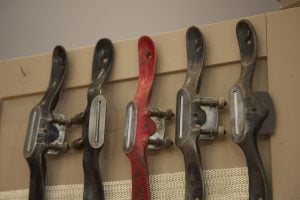 A bevy of #151s in my arsenal of spokeshaves.

In the minimalist tool kit is a spokeshave we refer to commonly as a #151 after the product numbering system used by the Stanley Rule and Level Company. This flat-bottomed spokeshave was another tool rejected by craftsmen for many years because it ‘stock’ to the surface of the wade with increased friction of steel and wood; something that didn’t occur with wooden spokeshaves. Nonetheless, metal spokeshaves stood their ground and ultimately replaced wooden ones because they didn’t wear out as did the wooden soled ones. Many craftsmen introduced a retrofit brass wear strip to the fore part of their wooden spokeshaves in front of the mouth and cutting iron. As the blade was also the sole, the craftsmen themselves were introducing the all-metal surfaces that caused higher friction and so it was only a question of time before all metal spokeshaves were the norm and wooden ones were displaced.

That said, those of us who were raised with the all metal #151 and then used a well adjusted and sharp all-wooden model were stunned by the differences between the two types. Wooden spokeshaves not only defied comparison, they were extremely functional, lightweight in use and could produce results that matched any plane in terms of quality of finish and accuracy. I record this here in respect of our forebears. The truth of their tools should never be seen as the step to better things in an evolutionary process but as the better thing from which we slipped and slid to a lowered level of expectation. 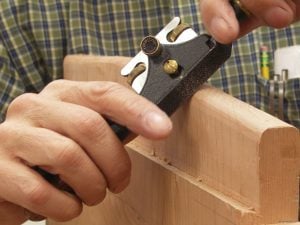 Now here is a contradiction tool. This all metal spokeshave defies fault finding and has always proved an amazing tool straight from the get go. It has a really fine adjustments and works well without vibration in any wood.

Now the #151 has held its own through the decades and indeed, when well-sharpened, well-set and well-used, the results are very good and the #151 will tackle most of your daily needs. I bought my silver-painted Stanley back in 1965 and have it today. This is the one with the little yellow oval sticker by Stanley that says Unbreakable – malleable steel.

I still have more on this but thought I would get going on it between flights.