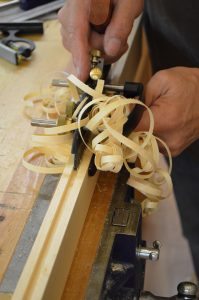 The Veritas plough plane came into its own today. It’s always been an impressive tool with lots of punch and panache at the same time. That said, and no fault of the plane at all, some times you come across awkward grain where the grain catches the plane sideways and no matter which direction you go it will tear on the top inside corner of the groove. Either way you go that corners sometimes becomes a little ragged. As I said, it’s not you and it’s not the plane. One thing that really helps with this is to use the Veritas marking mortisegauge.  It really works and works well. 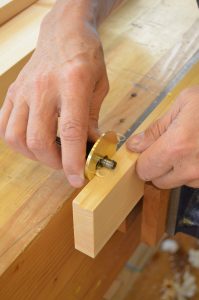 internal corners to the groove you are ploughing, make a short start at the beginning, this is the point at which you start anyway, to delineate the exact position of the sides of the groove. Now set the marking gauge cutter to the wall set by the plough and run the lines parallel to the edge, along the length of the wood to be ploughed.   Do the same to the opposite side, pressing both lines to the depth of the stem of the gauge. This cuts the wall of the wood to a depth of about 1/16″. 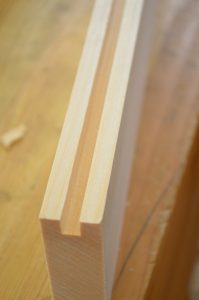 and run the groove. The wall will be clear and neat and should look as good as any machined edge you have ever seen. Grooves two feet long and 1/4″ wide by 5/16″ takes less than two minutes to run.

← Two days into the month-long marathonWhy do we call this work? →