I have a question(s) regarding high angle frogs. First, do you use high angle frogs in your shop? Second, have you used some of the newer frogs ie. made by Lie Nielsen? Do you believe there is an advantage to these planes when needed in crazy grain or is it a matter of just keeping a supper sharp blade on your No. 4 and not worrying about it?

Thanks for your time and your talent.

Re the high-angle pitch. 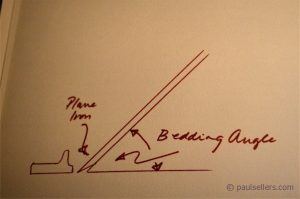 Depending on your angle, this might depend on who you are and how you pitch it. I think that these retrofits do help greatly in tackling difficult ‘short’ grain areas around crotches and also in reverse and spiral grain in woods such as curly cherry, maple, sapele mahogany and so on. I don’t use them because I can achieve the same results with what was commonly called a ‘poor man’s’ ‘York pitch’ , which for me (and others in my apprenticeship days) means that I simply I keep a separate plane iron or a whole plane dedicated to this function with a back bevel of five or so degrees on the larger flat face of the iron. 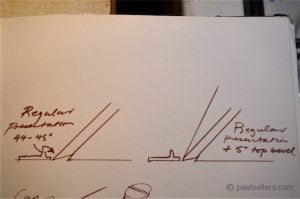 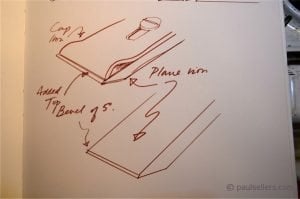 This is of a course nothing more than a very super-narrow micro bevel, which takes only two short rubs on the sharpening plate or stone at the finest grit (1200 is enough) to establish. This effectively presents the iron’s cutting edge at the same angle as the high angle frog at a fraction of the cost and yet enables the same proactive engagement at the cutting edge. This is also effectively what people are doing when they use a ruler on the surface of the stone to lift the iron to achieve a reverse bevel on the iron to take care of surface pitting at the edge of the iron or indeed a hollow iron. Most people I knew as a boy would always free-hand this, which works very effectively and gets on with the job.

Also, I would add that, usually, the only need for a York pitch at that cutting edge is to true board faces and edges where flatness and squareness are essential and where such flatness and squareness might not be so readily achievable with say a #80 Cabinet scraper or a card scraper. On wiry grain in surfaces, a cabinet scraper will earn its corn over just about anything else. Sometimes, on the edge of doors or the face of narrow styles where, as I say, flatness is imperative, a higher pitch plane iron presentation may be the only way to go and a ‘poor-man’s’ York pitch is highly effective and very quick in resolving recalcitrant grain. I should also add that you do not need a second iron or a second plane to do this. I have many times taken my existing iron and sharpened it with the addition of a bevel to the large flat face. I simply leave that bevel on until it disappears in subsequent sharpenings with no noticeable difference in my plane work at all. The only reason I suggest a second iron or plane is that a #4 or 4 1/2 smoother is an inexpensive alternative in the strategy of things. I should also add that in my opinion heavyweight, highly engineered planes do absorb vibration and weight at the cutting edge and this can be marginally more effective in surface planing. Whether the difference between the heavy and lightweight planes is justifiable is a personal choice that often depends on how much you want to or need to pay.

3 thoughts on “On the frog in your throat”