Hand planes are the source of great debate these days. I can’t imagine such a silly thing really. The internet has connected many debaters with little good fruit, but some, a little, maybe. I have been giving some serious thought to many things I have said or say or do or don’t do with planes. Fact is we need to know truth and not sales pitches or opinions as mere opinions by someone who might know nothing but have an opinion. But I watch and I listen politely about the bestest and the fastest and the heaviest and the ductilest and the thickest alloyist and the testingest and I pick up my old Stanley and I pick up my new Bedrock (not saying whose) and I say I have a place for both in my toolbox. The big test for me is which one do I reach for the most as a practicing craftsman who always has something of a time target to finish a piece by and most often I pick up my Stanley number 4 or 4 1/2. I also reach for wooden planes and one of my hopes is that I can one day buy and own a set of Philly planes made by Phil Edwards because of his quality and the fact that wooden planes glide across wood so beautifully. Click here to see his beautiful work. 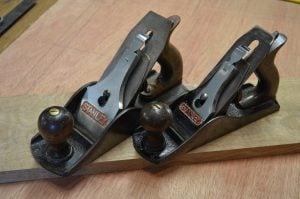 From the practical perspectives I buy many of my Stanley or Record planes on eBay. Usually they cost between £10-15 plus £6 for shipping, which makes them inexpensive and they can be fettled in about an hour or two to cut with the best. Even a Stanley in poor shape can be made to work effectively, so I don’t look for too long before deciding on a purchase. When I buy I usually use a sniper bid such as Gixen.  I look  at the plane and evaluate its overall condition. Superficial rust doesn’t bother me, but I would rather there be none. What I look for mostly is wear. I want a well used one that has been owned if possible by a craftsman. I like well worn handles with no breaks or repairs and still in full shape with no bits snapped off at the top of the rear handle. Repairs are rarely permanent under the heavy use a craftsman like myself might demand of them. I know that planes last for a long time as I have used my planes for almost five decades of daily use. I have replaced the irons and am on my fourth now and I almost never use any mechanical grinder. So if the plane has lasted that long, chances are you will find a plane with much less use than mine and mine is just about in perfect shape now that I have fettled it with sweat and hard work. Before I snipe bid I value the tool the determine how much I am willing to pay. I set my limit and place the bid. Gixen will bid in the last fraction of a second and if my bid is high enough I will bod 50 cents higher than the other bidder. I am content whether I win or not that way.

I have tried retrofitting cutting irons and found only marginal benefit in thicker harder irons but that then diminishes quite rapidly when I see how arduous it is to sharpen them. People who know little or nothing about planes and cutting irons are always telling me how much longer their thicker harder irons last in a single sharpening, but I have tried them and they are indeed harder and thicker and don’t you know it when it comes to sharpening them which takes foreeeeeeeever. Of course none of the tool  reviews mention this. All in all that then defies the very reasoning behind thicker irons and I don’t really care what method you use for sharpening or which stones or plates you choose it still takes twice as long with thicker harder irons. Besides, I like to sharpen more often than most anyway and both Stanley and Record irons in older planes well suit me because, guess what? They sharpen up so quickly and the edges last long enough for me to do a substantive amount of work before I relax and sharpen up again.