Someone mentioned out-of-parallel fences on plough planes. This can be a problem and happens often on old plough planes that were new decades ago but left unused and therefore unchanged but old. I actually haven’t had that happen with the 043 or the 044 but I have had it happen with other models and the writer told me that he had had it with 44s, 45s, 50s and even 55 models. 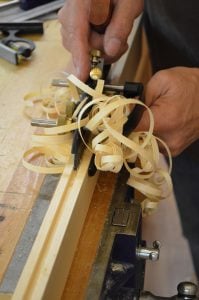 Beyond rabbeting and grooving I have never liked multiplanes for a variety of reasons not the least of which is the fact that most of the moulds didn’t work that well and they are very fiddly to set up. Compared to wooden moulding planes these planes were useless which is why there are so many around today still in boxes and pristine condition. Stanley went to a lot of trouble to produce them. The best plough planes still remain made wholly from wood with a handle rear end that puts the centre of thrust directly behind the main body of the plane and right in line with the cutting edge. My Marples and my Sandusky are the best I ever used for practical planes. I love them.

I found with plough planes where the fence is out of alignment with the skate of the plane, if I losen the set screw on the rear post the plane will cut parallel to the edge without a problem. If any problem exists it is relying on one set screw instead of the security of two. On the 043 and 044 I have never had a problem though and I now own a dozen of them.

A problem exists with both old model plough planes and new maker models and it is not a manufacturing fault but you should be aware of it and know how to correct it. This is also the case with rebate (Rabbet USA) planes too.

Because plough planes are enclosed on two sides, and they always run parallel to the edge of the board being ploughed,the iron penetrates the wood and as you move forward in the cut the leading edge of the iron is technically under the rim of the groove as it advances along the wood. A deep cut, one where the cutting iron protrudes past the skate markedly, say 1/32″ to 1/16″, then tears the rim of the ploughed groove leaving a ragged corner. When the plough engages reverse or short grain, the problem becomes exacerbated a hundredfold. To resolve this it use abrasive paper to remove the hard cutting corner pof the top side of the iron on both corners but I take care to keep this abrading to a bare minimum. I do the same to the underside of the oron too, as this ensures a smoother operation of the plough. This seems such a small thing but it makes such a big difference. I would point out that on the old wooden plough planes the irons actually tapered from front to back, which shows a well thought through development.