I just fettled a couple of the newly bought eBay plough planes and wanted to show the steps and progress I made to and on them. The main body of this plane was generally excellent and so too all of the components, but the cutting iron bevels were indeed a sad and sorry bunch with poorly shaped cutting edges. Anyone new to the the intricacies of these planes might miss some of the essentials, so I thought to complete the series with this final piece and also introduce some new pictures to the last blog I did on this plane. Until I think of something else I missed, anyway. 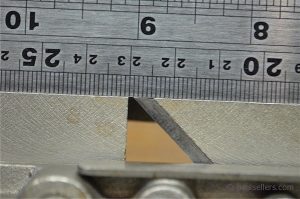 One thing that glared at me was the steep bevel to the cutting iron. This picture shows that the bevel is the same angle as the bedding angle. That means that the iron barely makes a shaving and the shavings I did get were too restricted to be of consequence. Had the angle been half a degree more it would not have cut more than a starting cut because the bevel of the iron would ride on the surface of the wood and prevent the cutting edge from cutting.

In times past we called this steep angle a “thick edge.” I can’t have that conversation any more because no one would understand what I was saying. Perhaps that will change today with this blog. A thick edge occurs on any plane where the bevel steepness of the iron exceeds the bedding angle of the plane to render the plane incapable of shaving. The reason this usually happens is laziness. It is essential that the whole bevel of cutting irons is worked on and not just the cutting edge. It is too tempting to keep raising the angle so that the edge is formed but the price is paid for in subsequent sharpenings. Remember that restoration is always a sign of neglect, maintenance is always better than restoration. 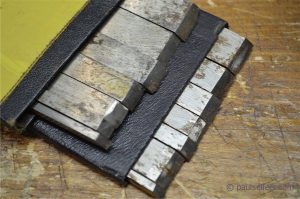 Every plane iron I took from the planes I bought and those additional boxed sets (2) came with convex bevels. They were generally poorly shaped and dull. Ninety percent had bevels between 35 and 45-degrees. Steep for the main part, but most of them would cut just fine. Most of the irons were indeed out of square. Not a practical result as the bottom of the grooves would also result in sloped bottoms commensurate to the cutting irons. 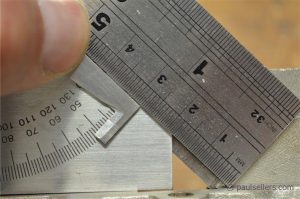 Steep for the main part, but most of them would cut just fine. Most of the irons were indeed out of square. Not a practical result as the bottom of the grooves would also result in sloped bottoms commensurate to the cutting irons.

The image left shows the iron mounted in the plane upside down. You can see the iron beneath the first two centimetres of the rule with the protractor against the skate and the rule showing the angle or rake of the plane bed.

This image shows two 1/4″ cutting irons in a sort of before and after mode except they are two separate irons. The one left is one I reground on the diamond plates. The one right is as it came. It takes about two minutes on a diamond plates going from 250 through 600-800 and finishing the grind at 1200-grit. After polishing with compound at 15,000 the iron is ready to go. 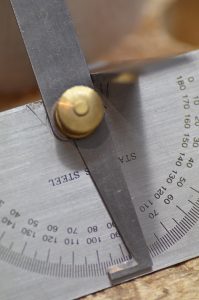 My reason for mentioning in the earlier blog #5 that the underside of the irons would need sanding too is because often the irons are cut with square edges instead of being sloped from front face to back. 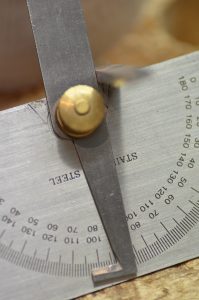 In general, Record always bevelled the underside of the edges from 4-7degrees. This meant that when the plane was dragged back along the cut, the edge of the cutting iron didn’t ride the walls and cut the walls on the backstroke, which is a general source of damage in using plough planes. it is a good idea to take a 10” flat file and bevel the sides to make them narrow on the underside of the cutter.

I still round the corners of the top face corners of the irons so that they don’t undercut the walls of the groove, especially will this happen with the opening cuts, so it’s good to take care here.

With my iron reground to the correct angle of around 30-degrees, I begin to establish the permanent camber I like on my bevels. With the iron now in pristine condition the iron looks like this… replete with shavings.

My polished camber looks like this when done and the side profile bottom shows the slight but continuous camber I conclude with. 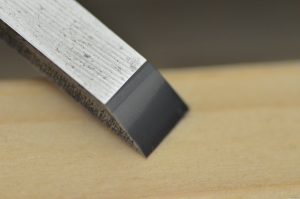 For comparable work with the Veritas Plough Plane, I wrote a blog a few months ago that you can read here. 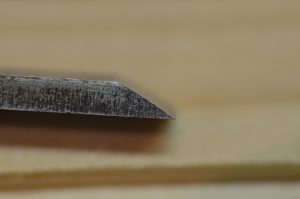 By way of closure. 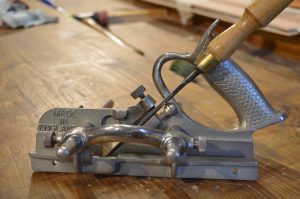 Always remember that, depending on the chisel type, size and thickness, you can often use a chisel as an iron in these planes. You may have to remove the threaded depth adjuster so that the chisel lies flat on the bedding rake, and then rely on friction with the pressure bar from above and the lateral side pressure holder in the side, but it works. 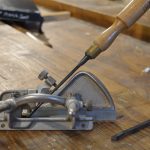 Firmer chisels are ideal for this if you have them, but bevel edged chisels usually work too, but the lateral side pressure holder may not work because of the bevelled corner.