Some of you will recall that John Winter, my 2011 apprentice, returned home to Patagonia at the end of last year. He went through training with flying colours and has a real gift for working wood. It’s hard to remember how many I have trained through the years, but their passage is usually one year long and then they make pieces whether they work with me or not after their training. Their training is and always will be free. 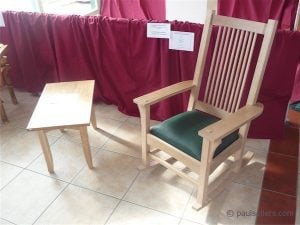 What they make becomes theirs to keep, give or sell. Though I have sorely missed John, he lived with my family during the year of his training, I was glad to see his progress after he returned to Argentina. He has continued working as a furniture maker in his homeland and this past month he entered his first furniture making show and came second. His entry was against adult makers. How amazing is that. John and his father came to me five years ago and we all built their workbench. John would have been 13 years old and his father, a doctor in our local Ysbty Gwynedd Hospital here in North Wales. His father is one of my closest friends and now works in a mission clinic started by his grandfather and his father. It is an amazing work perpetuated by three generations of doctors in Escquel in the province of Chubut. 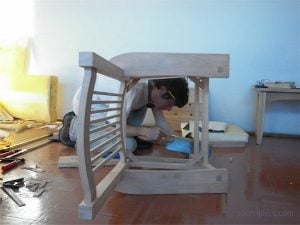 Here is a photo of John working on his knees as all furniture makers must at frequent times. May as well start young. Taking a young person or an older person into the workshop for a year has far reaching implications. As John becomes experienced his gift will create a place for him and he will train others as I did perhaps. So we pass on our skills, take criticism on the chin and face failures with some we hoped to work with and train. Outcome? One in five make it.