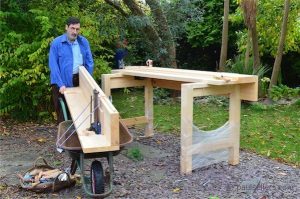 Part of my preparation for the upcoming month-long class and other classes in the future is to install a taller bench than usual. I have already established that the premium height for a hand tool bench is 38”. This is not a mere opinion. I don’t altogether care find too much real value in opinions. I like things proven through usage. If you are a machine-only woodworker, as most woodworkers are, you don’t really need a hand tool bench but more an assembly bench. I have worked with so many people working at 38″ bench heights with rare occasions where we need higher benches. This 38″ height usually accommodates people between 5’ 9” and 5’11” – Mr Average in the western world of woodworkers. Some people have taken the crease-in-the-wrist maxim from somewhere, heaven knows, I think for measuring walking cane heights. That doesn’t usually work too well for a bench height. I do like to have a lower assembly bench, but that’s like 18” from the shop floor. I build these when we work on premium pieces like the two cabinets we made for the White House four years ago. Hard to imagine today as I write this that I was actually walking through the White House and in the Cabinet Room the evening President Bush gave his departing speech. The streets were filled with crowds anticipating President Obama’s inaugural speech and this week he is sitting next to the cabinets I designed and made with the people I had worked with as apprentices, journeyman and when they became craftsmen in their own right. 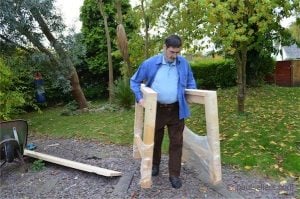 It’s hard to imagine that today I was dismantling a workbench we made for our YouTube Series we just finished filming and that I was wheelbarrowing the bench components to my Mondeo hatchback to get the bench to Penrhyn Castle. Yes it all fit in the car and had I adjusted the seats differently this 7’6” long by 42” tall by 36” deep workbench would have fitted quite nicely inside , allowing the hatch to fully close down and fasten shut. 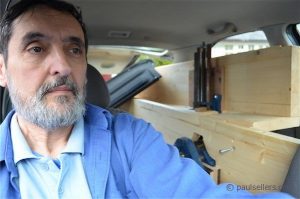 Phil was in the castle to help me prep and reset the bench. Actually, he will be using the bench. He’s 6’4” and 38” tall benches just don’t work for him. 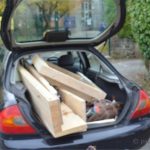 We will test this out for him over the coming year as longer term he will need something that fit’s him and his back and neck. By the way, there is nothing wrong with building long floor boxes from plywood for shorter people who are still growing, or jacking up a bench on two 2×4’s to gain an inch and a half or more.

9 thoughts on “The long and short of bench heights”