This week I have two workshops as well as a few people finishing off their rocking chairs. It’s wonderful being there and seeing the work come together at the different levels. It’s a small group of seven woodworkers that find excitement at the cutting edge of a plane and a chisel. A saw that didn’t work today but tripped and jarred mid-cut drew them around my bench. I pulled a flat file over the teeth three or four times. I didn’t count. As the file passed over the teeth my fingers traced the sides of the saw to guide me evenly either side of the plate. I glimpsed the speckled light from the flat-topped teeth and gauged by eye their failing over-set width. The sharpness was equal to the cut in oak or ash and even dense-grained woods known to resist the cutting edge and yet unequal shape would beset the saw with each stroke. 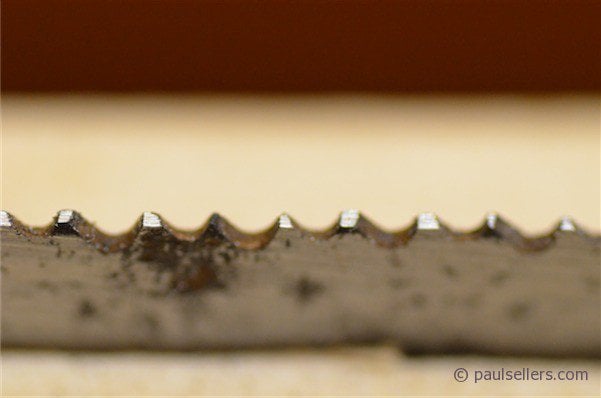 The saw now topped  received the file and with two stokes in every gullet I formed the teeth with shape and size that matched equally. Between two hammers I took away much set to relieve its kerf and passage through the wood and then the saw was done. I created progressive teeth that cut patiently in the start but reaching to greater aggression by the hand.

I passed the saw in its test. It cut the wood of oak and then of pine with a fineness now renewed. This old Spear and Jackson tenon saw with 9 1/2 teeth per inch is large toothed for a tenon saw of 12”.

this wasn’t the saw. This was one a restored a few months ago in the US, but the images show flat tops and that’s what I wanted you to see.

The below picture is the restored teeth. 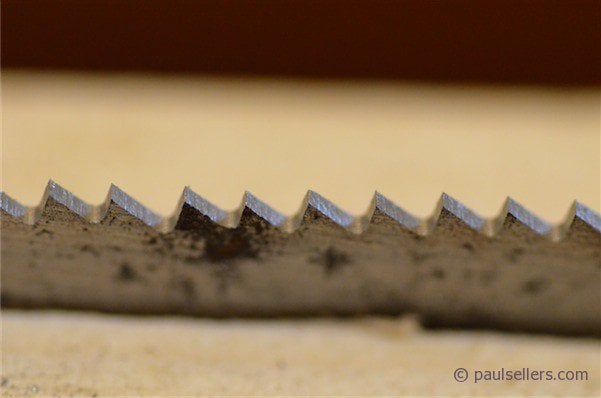 I have an aspect of saw sharpening that only a few people know of because I showed it to them. They are keeping quiet about this method because I asked them too. Soon you will know this method and assess it for yourselves because I want you to have everything that I know for free or as cheaply as possible. I am sure you will adopt it, and I don’t think that you will know about it before we reveal it to you so we will be letting you know about it shortly.