Sitting in the airports always sparks off feelings of the mass-manufacturing process of industrializing society and so I usually write a blog on the conveyor-belt we smart people ended up on. Bit like the computer we think we operate and control and don’t know has the power to change circumstances to where we are merely a function button being pressed or a little cog next to but driven by the bigger wheel. I decided not to do that this time and so I leave out the power routers and chop saws to think about the power of working wood with hand tools.

I have been swamped with so many emails I just had to get to the keyboard of progress and thank the screen for capably dispatching this blog to a 100,000 visitors in a few seconds. So, thank you one and all for so much encouragement. You made the first leg of my trip so worthwhile and fulfilling.

My hands have provided for the needs of myself and of others for almost 50 years. Over the last month of our US tour with the Woodworking Shows we bridged many gaps to balance out the misunderstandings between power-driven mechanicals and those driven by the desire to master skill. Were I to quote those inspired by my demonstrations I would have no room for the blog, but I should add a couple of thoughts as a sort of debriefing for myself.

The presence of cynicism 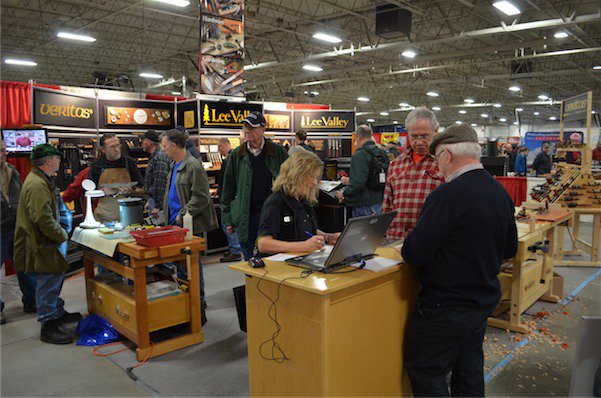 Cynicism is always hard to engage and difficult to dispatch. When cynics walk past, stop, and then sit down, they draw from the positive dimension surrounding them into pockets of an opposing extreme. Better they change heart and absorb than squat to counter and discharge what could help them and others. This is usually a rare phenomenon but can as I say be difficult to engage. Perhaps this happens only occasionally in several thousands, but it happens.

Seeing faces by the dozens glued to the saw as I rip down a board dismantles the effects of industrialism in a most positive way. This does dispatch the cynics or better still changes their view to be more inclusive of alternative realities that they can include in their woodworking arsenal. I like that; equipping people is fun.

Exclusivity by its nature precludes

I often wonder about this. Competitions, presentations and such serve many purposes and in a country built on competition I see how winners become accepted and validated and all others as losers, well, are always second place. I watched some efforts recently where the work stood on the pinnacle of exclusivity. In the Castle where I have my workshops are the highest examples of this. Inlaid exotics and very fancy work that was designed to impress Kings and Queens, Foreign emirates and Lords of every type. Exclusive people develop exclusive work befitting snobs. Fact is, as a counterculture to that, we now have woodworking guilds and societies (thankfully) that counter the guilds of old that hid the content of work behind walls of secrecy. Reducing these barriers between the haves and the have nots is an important step and I have been impressed by guild members at the shows who so willingly share whatever experience and knowledge they have with anyone who asks.. I think that this is very healthy, really. Great work all of you guild members in Baltimore MD, Kansas MO, Indianapolis IA, and Springfield MA. You were all fully inclusive, impressively kind. Thank you!!

I had to travel to the UK mid tour

I had hoped to see you all in each of the twelve states over the twelve weeks of the tour but commitments brought me to the UK for two weeks. Traveling over here was a great experience with a minor delay at Manchester Airport due to lack of docking for half an hour. I met two wonderful people on the two flights sitting next to me on the plane and hope they are both doing well and settling into their new lives; one on military training in Fort Bragg Georgia and the other in Overseas Missions in Carlisle UK.

I received a package on my arrival 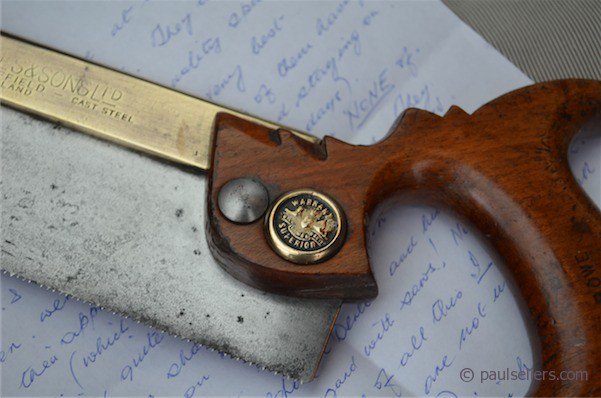 In the US I received a pleasant email asking for the name of a “saw doctor”. That’s what we used to call them. Anyway, I emailed back and told the writer I didn’t know of any any more and that if he sent it to me during my return I would set and sharpen it and mail it back to him. I thought the saw was lovely and so to the letter which reads:

I served my time at a place in Oldham; William Rose and Sons. They did joinery work of the highest quality specialising in Banks and Churches. Only the very best Craftsmen were employed, most of them having served their apprenticeship’s there and staying on for years (which was unusual in those days).

What I find quite amazing now, is that NONE of these craftsmen sharpened their own saws. They were collected on a regular basis by a “SAW DOCTOR” in our case – Charles Denton and Son, Union Street, Oldham. Old Charlie and his son (to a lesser extent) was a wizard with saws! Now alas no more. As a consequence of all this I never learned and now alas, my eyes are not up to the task of fine teeth. (Even with glasses).

Now, I make small boxes in hardwood and watch your excellent videos. Of course I do have other saws, but I bought this one when I was 15 years old and am now 82. It’s had a hard life and shamefully it has been allowed to o rusty several times. Also, as you can see, I have had a go at sharpening and it probably looks as though the rats have been at it.

Very best regards and thanks, 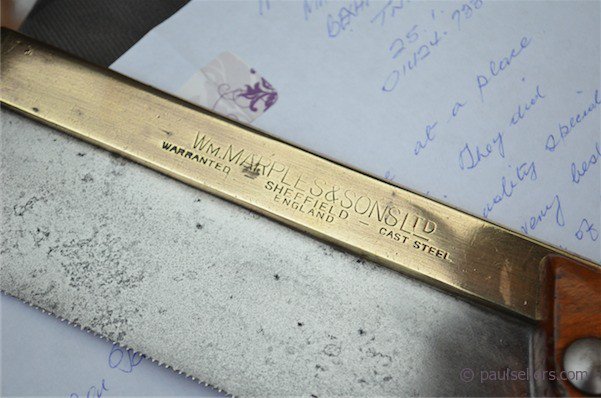 I liked the thought that I could be his eyes and hands for what is still to me a small task. Holding a saw belonging to a man that bought it new as a boy of 15 somehow connected me to a fraternal brother of you will. Empathy is the element that connects the emotive sphere of creativity between like souls. As soon as I saw the saw, before I even touched it, I recalled the pride and joy I felt 50 years ago when my first dovetail saw lay in a manilla coloured box in my very young and inexperienced hands. I knew his pride and felt his joy and, now, looking back through all the 67 years he used his saw, knowing how much the saw has served him, I identify with him. I truly hope that I am still making boxes when I am 82 years old and that I have my Spear and Jackson saws to work with. He evidently loved working with his hands as I have and do. It’s unusual to see the name stamp on a tool and know the owner. They are usually long since gone. I read his lovely hand written letter lamenting some aspects of the lost past. Who writes letters any more and how many do you get through the mailbox? 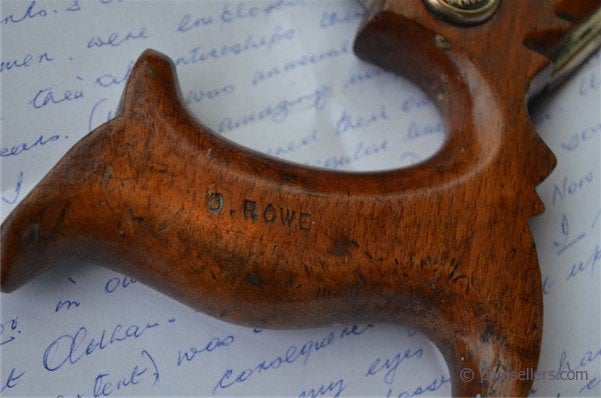 Well, we must look forward and hope we can continue to arrest some of the losses we’ve seen take place. DeWalt, Bosch, Milwaukee, Black and Decker may well have given us power tools, but they can never match what they took away from us. Thankfully I never went the whole hog toward machine only woodworking and I was always able to find the balance. If I stopped working with wood tomorrow I could say I have ended my work life fulfilled. I have passed on my knowledge, enjoyed woodworking friends and colleagues and spent my days rewarded on a daily basis. When others say I can’t wait to retire and stop working so i can do what I like to do, I say to myself, I hope tomorrow that there is work for me to do. You, you who want to learn new skills, are my work now. We have much to do.