Customising benches can be an obsessive thing if you don’t take charge by limiting yourself to the essentials. Looking back on my previous postings on the Paul Sellers‘ vise clamping system I found myself relenting a little because there are times when dogs become a man’s best friend.

My drawings show the three alternative ways of using the basic bar clamp. 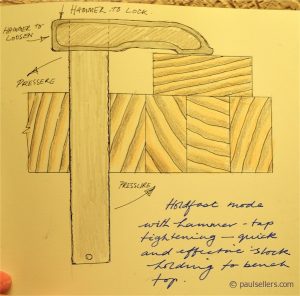 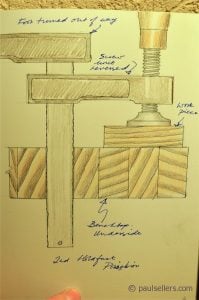 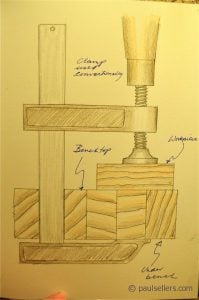 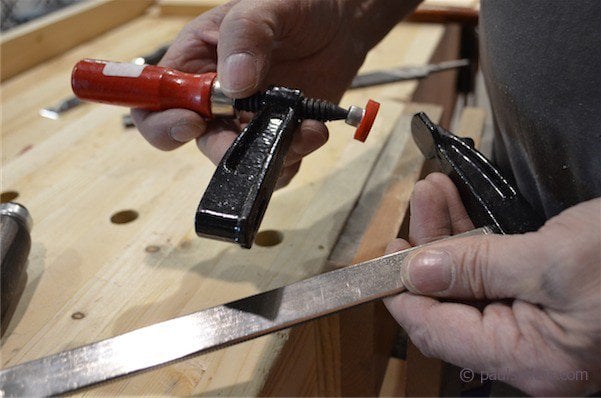 First off, it’s necessary to separate the screw threaded shoe unit from the main body of the clamp and this is simply a question of filing off the rivet at the end of the bar. I filed from both sides. 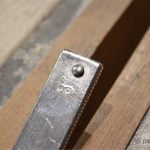 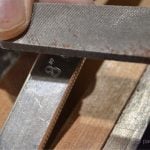 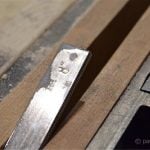 If you are concerned that the shoe will slip from the bar during normal function of the clamp, a rubber band wrapped successively around the clamp in place of the rivet holds the shoe in place. 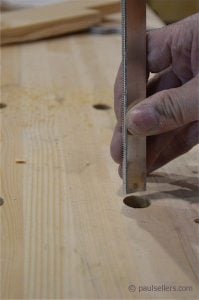 Separating the screw unit from the bar means that the screw unit can be reversed and inserted in the hole from above or the underside of the bench. Turning the screw-threaded handle then operates to cantilever the bar in the 3/4” bench hole by tightening the clamping mechanism on top of the dogged workpiece, which in turn secures the clamp and workpiece to the benchtop. We would generally call this a bench holdfast.

This method relies on the cantilevered bar pressing on the walls of the hole at the top and bottom. 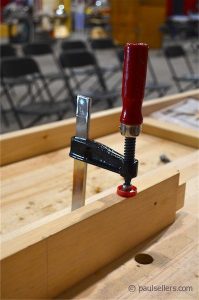 A second method still relies on the separation of the screw threaded unit from the main bar. Separating the shoe allows the bar to be passed into and through the hole from the underside so that the clamp can be used in the normal manner. Rock solid!

This method relies on conventional clamping to both sides of the benchtop. 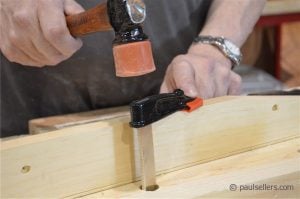 I found that without the plastic shoe the holdfast slipped lose, but with the red shoe it held just fine. By adding the silicone shelf liner between the shoe of the clamp and the workpiece this system holds fast!

This method worked great for a holdfast. 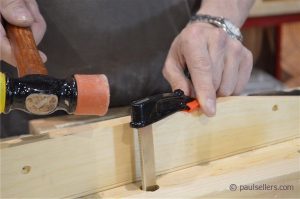 Tap the top of the clamp head to secure the work, the heel to loosen.

Here is a vee shaped toggle to hold the clamp in position height before attaching the second part of the clamp.

I have another dog system ready to post shortly. Simple, wood and recycled surveyor’s marker flag. 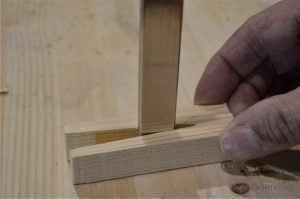 1 thought on “Versatile Retro on a Common Enough Bar Clamp”