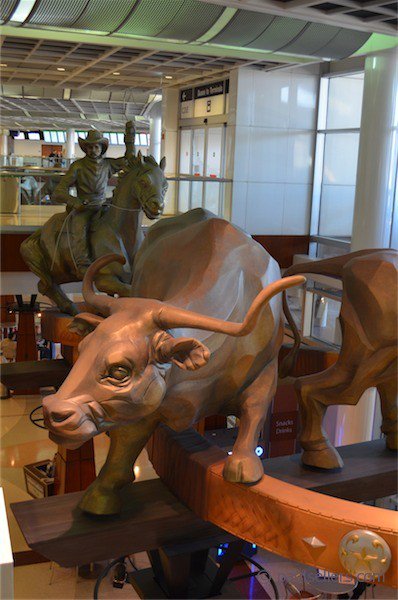 The congruence of two colliding worlds at Dallas-Fort Worth Airport reflect the present-day disjuncture of former woodworking with today’s leftovers of our machine-fed world of mass making methodology. Fort Worth past and present encapsulated this way expresses the unlikelihood of two worlds ever uniting in harmony just as the elevated sculptures split reality in two. The blue shuttle bus you see through the window whisks me off to the next terminal where my plane stands to fly me skyward to North Carolina and then on to Tampa, Florida. 200 people sandwiched side by side inside a capsule of aircraft alluminium propelled by Rolls Royce jet engines has become normal. 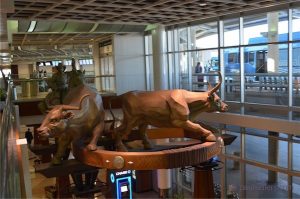 I contrast the chills of Indiana and Ohio as I look up at the palm trees in Florida. Neighbours in the hotel decide on a midnight party and scream for two hours reminding me that this is the American Spring break. I drift back to sleep after an hour but then the fire alarm screams for me to get out of the hotel. The doors swing open along the long corridor and people stand there staring at each other not knowing whether to believe that the hotel could be on fire. This is repeated for the next hour nine times. No one apologizes for anything and no one admits anything is wrong. 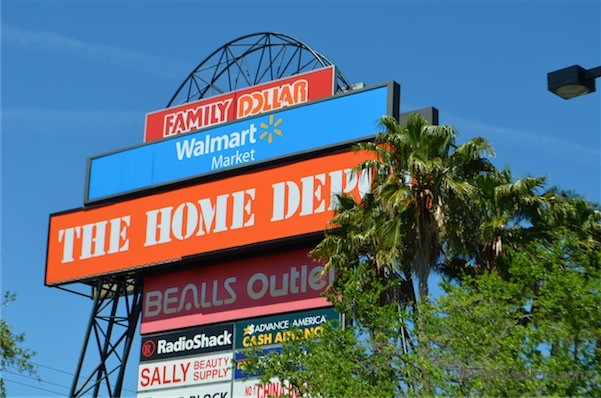 I thought of the cold I met in upstate New York when I loaded 2x4s to build my knock-down Paul Sellers’ Joiner’s Workbench for the traveling Woodworking Show’s show December 31 2012 and found new contrast as I loaded my rental car with two-by’s here in Tampa. All the trees are in bud and beyond, with leaves emerging alongside flowers and palm trees silhouetting Florida’s warmer climes. It’s almost surreal, if only for me, as I load the wood through the hatchback seats and spread them out to surface dry in the temporary Chevy kiln. 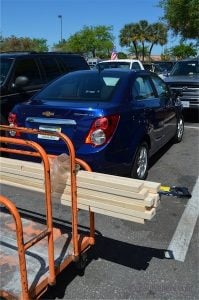 A woman mounts her massive SUV and laughs over her shoulder saying as she laughs, “Thats, something. You have to cut it up to get it in your car.” 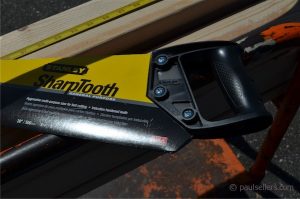 Others walk by smiling or chuckling as I cut one two-by after another with a newly bought Stanley Sharptooth 500mm (20”) handsaw. The cart I’m using is an ideal sawhorse for the work in hand and it’s much easier even than making two sawhorses. I think that I will make a traditional saw horse at the woodworking show…maybe. 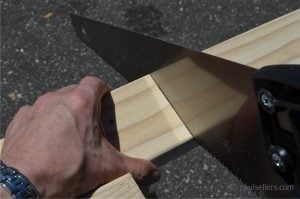 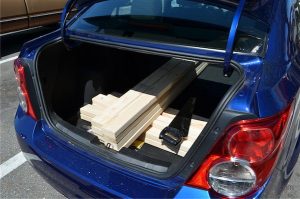 For traveling, I stacked the wood neatly in the back of the car. It will easily carry enough of the shortened 2x4s – 17 @ five-footers and the 89.5cm (2’ 11”) offcuts (these make the laminated legs and stretchers etc). 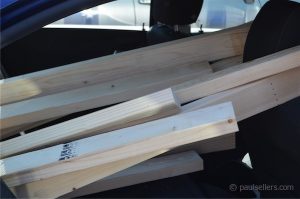 At my hotel I spread them out in the back of the car and park in the sun to encourage them to dry. An hour later the car is steamed up. 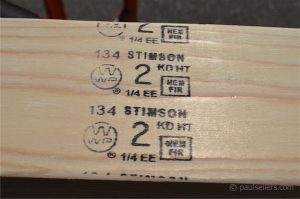 This Home Depot doesn’t carry SPF two-bys but another hybrid under the HD generic “Whitewood”, which is of course not a wood species at all. This one is Hem-Fir, which obviously stands for hemlock and fir. 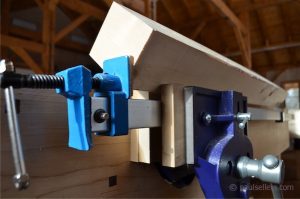 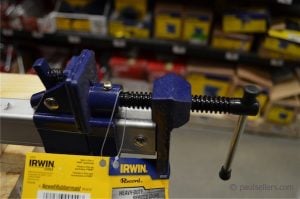 Oh, and look here. This is another one of those mark-up import deals again. This is the first time I have seen Irwin put out this clamp type. They are identical to the Harbor Freight clamps but two and a half to three times the price. Further proof that these clamps come from the same Asian factory. 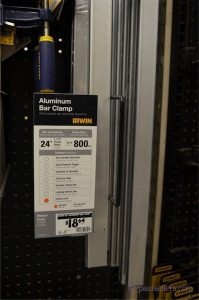 Now think about this a little. If Harbor Freight can sell these 24” clamps for $6 and turn a profit, imagine what the Home Depot and Irwin is making on them with their buying and distribution power! The same 24” clamp by Irwin Record is $18.64. You can buy it, we can help!!!

Outside in the Florida spring sunshine I crosscut my two-bys to length using as I said a Stanley 20” handsaw and I must say these saws crosscut sweetly. They boast induction hardened teeth of course, but that to me doesn’t mean long lasting so much as disposable and careless, not sustainable, renewable, recyclable and of good value for future generations. Remember that during my demo’s I am using a Disston 16” handsaw made in 1848 that I can resharpen every few weeks.

Any way, I have the wood I need to progress a bench at the show, so if you get chance, please come to the show and watch how it’s done.