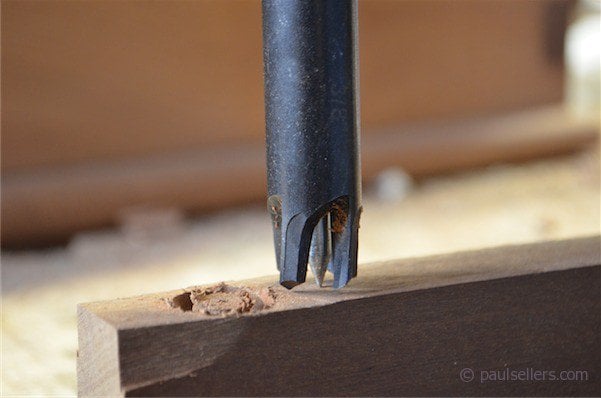 I had meant to post on this some time back and forgot. I don’t altogether like plug cutters much, but good quality ones work well in drill presses (pillar drill UK). It’s the drill press that’s the problem more than anything. Often when I need a plug we don’t have a drill press handy. We look bemusedly at the plug cutter and the wood and then the hole. Now I can always make a plug in a minute or two with a 1/2” chisel just fine and that’s generally what I do, but when we need a dozen or more hand cutting can be tedious and that’s where I find plug cutters fit the bill. A few months ago I was in Lowes, a US big box store, and I saw a plug cutter with a difference made by Hitachi. they are available individually or in a pack of three; 5/16″, 3/8″ and 7/16″ I think. 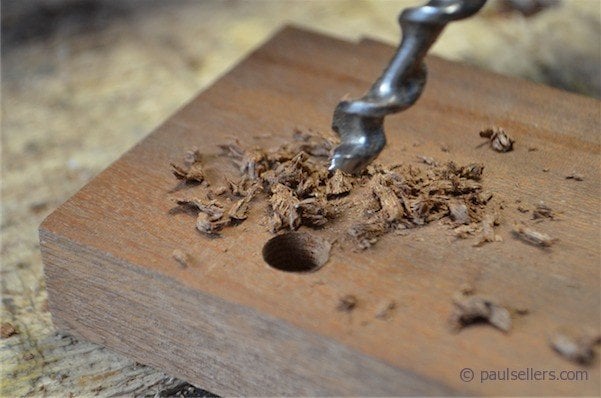 I wanted a plug cutter I could use in an electric drill or better still a battery-driven screwgun/drilldriver and as soon as I saw this I knew it would work. Regular plug cutters without a centrepoint spin off course straight away and leave the surface badly scored and rough. They are virtually impossible to hold on centre in other words and they just will not work without a drill press. In this case, set it up in a Dewalt screwgun, and, cutting spiral-grained mahogany, the bit centred immediately and without effort to cut a perfect plug. Furthermore, the developed plug is tapered slightly and so any variance in drill bit sizes will generally be accommodated.

So, here is the result. I first drilled the hole for plugging with an auger bit and brace. 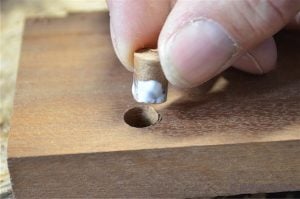 I glued the plug and aligned the grain to the main grain axis of the block. 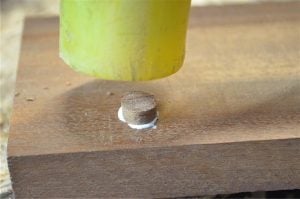 Tapping the plug home tightened the plug perfectly and the plug disappeared. 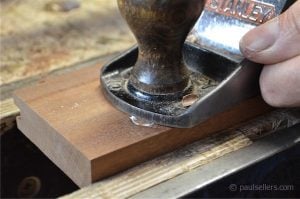 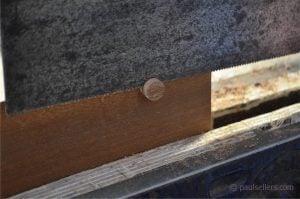 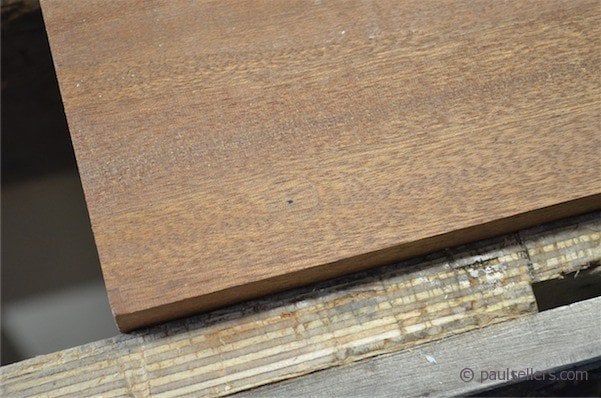 The plug in this section of wood is found by the blue pen dot.

All in all, the only minor flaw I found wasn’t a flaw in use. The centrepoint feels a little loose and allows a little off-centre play. Surprisingly this made little if any difference to the quality of the cut and every plug I made came out perfectly round. The main reason is that the spring-loaded centre point retracts into the main body of the plug cutter as pressure is applied via the screwgun. The minute fractional hold by the pointed centre pin is enough to allow the circular cutter to scribe the inner rim of the cut and so allow the outer rim to further keep the cutter perfectly aligned and without wander into the full depth of the cut. All that remains is to remove the plug by levering the core with a slim screwdriver.

As you can guess, this plug cutter is a great addition for concealing screws and eliminates filler whether the chosen finish is clear varnish or paint. I found that the cutter works best in close-grained hardwoods at a slower speed and higher torque set. I also found that it worked will in softwoods and softer woods such as spruce and pine but at full speed with slower feed.