I am a fairly new woodworker and am gathering all the tools that I need (non power). I bought a used #4 Stanley Bailey and like it a lot. I am confused if I should buy more bevel down planes or go with low angle bevel up planes.

Could you write a blog for new woodworkers to clarify the pros/cons.

The literature (Veritas/Lie-Neilsen) say the bevel ups are good for new woodworkers, i.e., that is to say lighter weight and less complicated. Why? Do you agree? There must be some trade-offs that they are not mentioning? Also, if this is true, in a few years I will not be a new woodworker and may regret buying bevel ups if bevel down is the better for more experienced woodworkers.

This question is a frequent visitor, frequent enough for me to want to offer some facts, perhaps a point of view or two, and something to balance out what’s being expounded from sales catalogs, engineer makers and populist magazine writers, editors and such like that who have accountability to bottom liners. 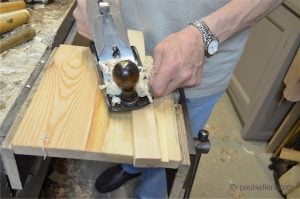 A frequent massaged message I see is that suddenly we see these plane irons being touted as best sharpened at 25-degrees and not the usual 30-degrees. This effectively gives the combined lower angle of 37-degrees as apposed to the 44-degrees of a conventional bevel-down bench plane. This is a stretch massage of information to reinforce claims the different angle is considerably lower than conventional planes. Most of us sharpen at 30-degrees because edge retention is so markedly increased at 30-degrees and the plane stays usable for much longer and these planes are really no different.
A bevel-down bench plane is infinitely more diversely useful than any and all bevel-up planes touted as the new bench plane of the age. They will do work that cannot be done with a bevel-up plane and are always the go-to plane for me and also for my students on both sides of the pond. Bevel-up bench-type planes cannot and will never replace the infinite versatility of a #4 Bailey-pattern bench plane and a Bailey-pattern #4 bench smoothing plane is the very best and simplest of all bench planes for any new woodworker. 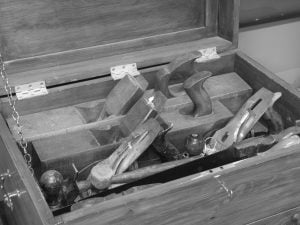 It’s the number one first plane over any other on the market bar none. That’s my opinion but not mine alone. I could never be without a pre 1970’s Stanley #4 smoother no matter where I was in the world. I can on the other hand live without any of the other makers dating back to the 1700’s.
Now then, let me say this also. I absolutely love bevel-up bench planes. I especially like them for mitre planes which is all they are really. And this is why i said my opinion is not mine alone. These bench planes are identical to early planes used in times past. If anyone showed these planes to a craftsman a hundred years ago they would have said that they were mitre planes used for trimming end grain using shooting boards, mitre shoots and other contraptions used to hold and guide the plane and hold the wood as the plane passed over the surface being trimmed. Many of those craftsmen were around when i apprenticed and they had old rosewood, bronze and ebony planes with the irons set at about 12-degrees. these planes had thick irons too. now these men never pulled out their mitre planes and started using them as smoothing planes. That said, if I ever had the choice to make over any plane maker including those £3000 planes for a user plane, I would still choose a Stanley #4 for my daily user plane even though I can indeed admire the engineering in well crafted planes.
So, I especially like the chunkiness and weight of bevel-up planes for end grain work, but I can get identical results with a thin-ironed bevel-down Stanley and even if I couldn’t, it would be so close no one could tell the difference.
We use the bevel-up planes in the schools and find them truly positive to have for certain aspects of our work. I would recommend everyone to own one of them at least, but only after they own a couple of bevel down Stanley planes first. It’s no secret that I do not like heavy bench planes of the #4, 4 1/2, 5 and 5 1/2 sizes. I feel that they are generally excessive and costly and especially is this so for new woodworkers. I believe I speak truthfully on this issue and even after fifty years of working wood I still rely almost solely on the the planes numbered above for my daily work. With these four planes I can do anything I can with other planes.
One plane I really like and one that makes a close second to the Stanley smoother is the small bevel up smoothing plane by Veritas. I think it’s the best bevel up plane because of its lightness, feel in the hand and balance. I love it and use it often, especially with a shooting board and on light materials. My second choice is one I use for shooting edges and shooting board work is the Veritas Jack plane. These two planes are wonderful to own.
My suggestion to any new woodworker?
Go get yourself a cheap Stanley #4 first. Follow my free YouTube videos and fine tune it. Just try this and see if it doesn’t do what I say. After that get a #5 Jack plane quickly followed by the wider Stanley #4 1/2. This plane give a little extra weight over the super light #4. Next in the stable is the #5 1/2.

20 thoughts on “Which plane–Bevel-up First or Bevel-down?”