I’ve spent several days working on the bed and of course closing in on the finish line means planing and scraping the pieces and sections for sanding ready for assembly. As you know, sanding for me is not sanding smooth but sanding rough. Scraped and planed pieces remove all the flaws many woodworkers now normally relegate to belt sanders and random orbit sanders. Things like snipe, planer and saws marks from machines and so on. Dust masks, ear defenders and dust extractors expand into a totally unnecessary plethora of essentials I want to avoid as much as I can. That’s freedom. After using the [plane or scraper, sanding rough to 250-grit takes only seconds per piece. I think I am faster with hand methods and I get really good exercise to boot which is good for my health and wellbeing. Something we always fail to include into the equation.

What I am standing in here, plane and scraper shavings, would be dust in a dust bag if I were to use power sanding equipment. There is a place for both, don’t get me wrong, but when I can use planes and scrapers I prefer this to the alternative. 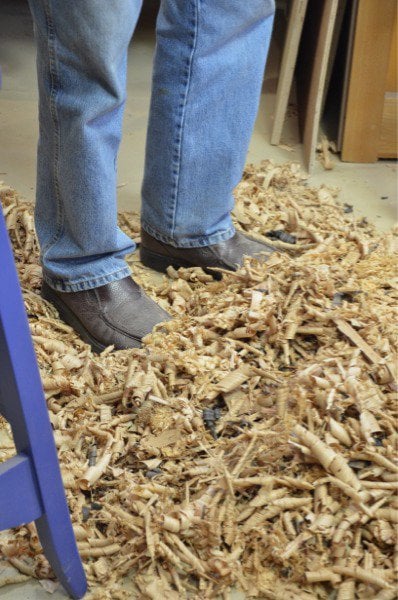 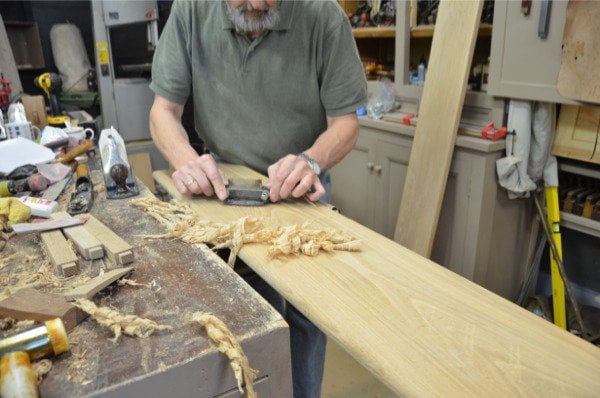 Mastering the plane and scraper elevates my quality of life and workmanship beyond measure and certainly higher than any machine can give me. One thing I have noticed with articles and chapters on scrapers is that there is more emphasis on two thumbs behind the scraper plate flexing the  plate to task than reference to the heel of the hand flexing and powering the scraper, which in fact is far more practical and, in my day, used far more. I went to some top sites on scraper sharpening and using to further verify if what I was saying was so and was most surprised that they confirmed what I am saying. Some of these sites are by well-known gurus  and others were reliable magazines and catalogue suppliers and so I carefully say I think they are sometimes a little imbalanced in what they present. So, here we go.

Working alongside the men I apprenticed with I learned much. One thing is that on larger surfaces and difficult grain you sharpen two or three scrapers when you start. That way, when they get hot, you drop the hot potato and pick up the next. Cycling through that way means you can cover a larger area without breaking of for cool down time and you have enough (12) cutting edges to work through instead of the usual 4. I stayed with this and it means less downtime and pretty much a fresh edge throughout the process.

As to the two thumbs aspect of using the burnisher. In the four videos I watched I actually did not see large fluffy shavings but minute ones and lots of dust and yet they were saying that when the scraper went dull you ended up with powder and little shavings. Exactly what they were getting. One video introduced a wide range of jigs to square the scraper edge and other none-essentials along the way to further confuse the very simple task of sharpening scrapers. Another filed the scraper at 90-degree across the scraper instead of draw-filing along the length, which makes straightening very difficult. In the end I felt so frustrated because again it was a crowded mass of miss-information that clouded the real truth. I must complete a series of videos on choosing, improving and using hand tools. To show which tools do what, which ones work and work well and how to get into the real power tools of woodworking, which have no tails and buttons to push. Soooon!!!

My scrapers are not to expensive and I recommend buying the set from Veritas. The hardness is perfect, the flex well to task, they retain their edge and take an edge readily. I have every type of scraper made I think and have used every maker type. Bahco scrapers are good too. The reason I like the Veritas set is that they are different thicknesses and different sizes. Here is the link. Get the scrapers only; plus a burnisher. Holders and edge formers are not really necessary and they slow down the development of skill and intuition, which speed up the whole process for me. Sorry Veritas. 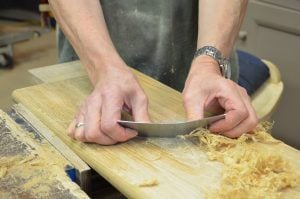 Using two thumbs to flex and bow the plate is common and it works and works well. What I saw in the four videos fell far short of real power scraping. Yes I saw glistening surfaces but I couldn’t actually tell whether the surfaces were actually scraped or simply polished with the dull edge of the scraper; where the cutting edge actually never cut the wood but the roundover. Anyway, the long and short of it is this. No one referenced the fact that in general two-thumbs scraping is ideal on narrower boards where the knuckles of the hands hang either side of the workpiece and so give free access to adjusting the scraper height so that the optimality can be achieved to reach the exact cutting edge. With card scrapers, it is necessary to adjust the angle of presentation and change the trajectory to task. Many things affect this. I am not saying that two-thumbs will not work on wide boards, just that it is not always ideal. Where two-thumbs comes into its own is for localized flaws, edge work and minutely low spots. On tabletops and boards say wider than six inches, the heel-of-the-hand method is the single most effective if you are using a card scraper. 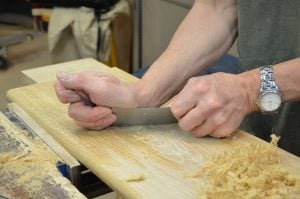 I am raising this now because it’s important to get it early on and not feel wimpy when you have a massive tabletop to scrape. working on my bed I had 2×4 sections of oak and also 1 1/2” by 10” lengths 7’ long to surface. I think that one of these large surfaces took me under five minutes to finish out silky smooth with a card scraper ( or should I say 3 card scrapers). These scrapers are still sharp now and will or would keep going through three more beds. Well worth the effort.Placing the heel to the steel and pulling up with two or three fingers readily flexes the plate to task and I am on my way. The shaving are long because you present the plate to the wood tangentially and push or pull. The strokes can be a foot or so long and so the pile builds in seconds and soon you are ankle deep. I plane where I can and in the case of the palings I only used the scraper two or three times for awkward grain. In large surfaces I rarely plane because of the higher risk. One video I watched said that the scraper is very slow at reducing protrusion and should be planed. What he showed wasn’t true at all. he would have been better scraping with either a number 80 or a card scraper. 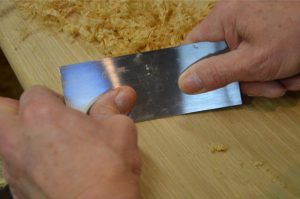 As with the two-thumbs method, you can push or pull using the heel-of-the-hand method. Using this method, you stand facing your work and use sideways swipes from right to left or left to write and work along the workpiece. It works!