I am watching your hand plane videos and as you are planing the end grain you make the comment “make sure your plane is sharp”… “don’t neglect the sharpening of your plane”.

You are not the first teacher I have heard say this and I think every woodworker understands that we need sharp tools but my confusion is with how often do you sharpen your tools?

When building the coffee table I sharpened my chisels 3 or 4 times chopping mortises.  Is that too much or too little? 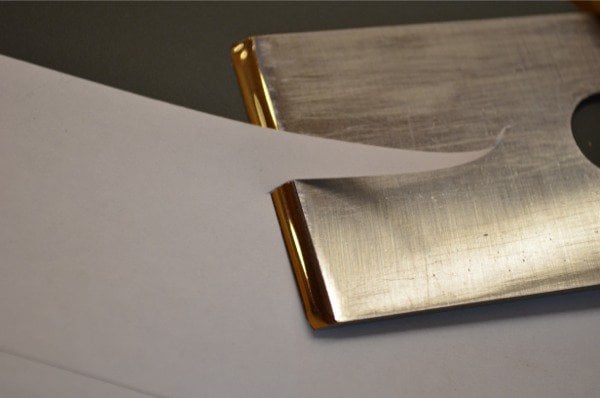 When Making my dovetail boxes I started with a sharp plane and did not re-sharpen through the whole project.  I realize there are many variables in ‘when you should sharpen’; wood type, sharpness to begin with, end grain work vs long grain, etc.  I guess I just would be curious to know at what point during a project you stop and sharpen.  I realize for the sake of time you need to edit that stuff out of the videos, but I would be very interested to know how you incorporate that into your working.

Thanks and I love everything that You, Joseph, Phil and the others do. 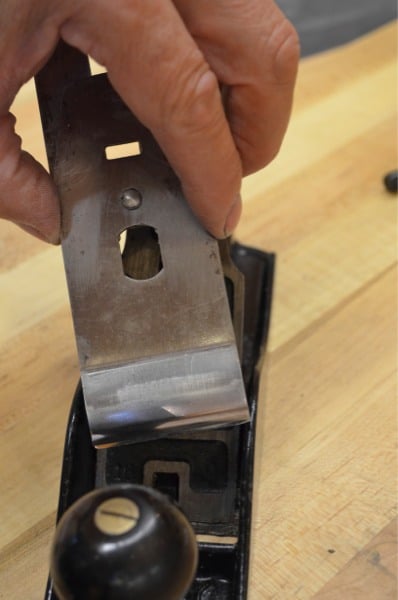 Thanks for the question. In some areas of woodworking I see what were once basic and simple tasks become something of a preoccupation and certainly sharpening edge tools is one of them. Much if not most of it came more from people selling planes and related sharpening equipment at woodworking shows who learned a trick or two about sharpening a bench plane to produce lacy thin shavings so they could sell the planes, sharpening stones and so on. Unfortunately, there wasn’t enough coming from those working the wood as crafting artisans, that could counter the artificiality of what was becoming normalised and being shown so certain excesses for sharpening became complicated.

In my lifetime I’ve seen people go to the stones, sharpen a tool edge and get on with the work in a couple of minutes. No big deal. This might happen several times a day, depending on the work. That’s changed and now, instead of going to the stones and sharpening a tool edge quickly and intuitively, woodworkers set up guides and gauges, measure the accuracy of angles throughout the process and labour for up to an hour to sharpen and set up a plane. The whole process of sharpening a plane surgically sharp should take about 3-4 minutes including resetting. I see all too often that people don’t believe they can achieve independent freehand sharpening that’s highly effective and efficient.  They think that it takes years instead of a few minutes a day for a week or so. The fact is that this culture in woodworking has indeed changed our perceptions. Today, many people like to  do just that, which is fine. On the other hand though, some people just want to get on with their woodworking and I wouldn’t want anyone relatively new to woodworking or searching for hand tool methods to think the type of sharpening I am referring to is a normal standard procedure. It’s not. Many modern-day procedures have complicated the processes of sharpening and serve more to distance woodworkers from a simple sharpening process done throughout the day. 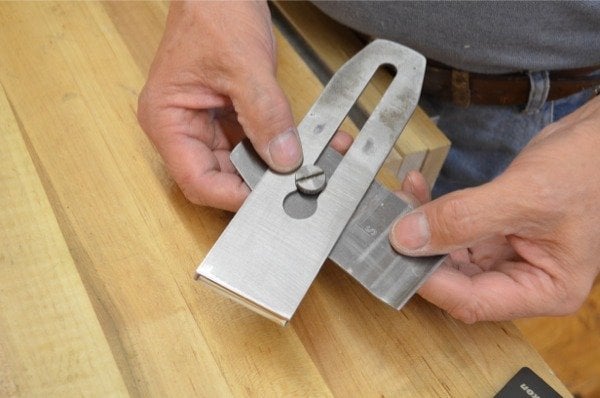 The simple reality of when to sharpen is this: When a plane skuds for the first time, usually, not always, it’s time to sharpen. When I find the chisel needs lifting even slightly higher from the surface being chiseled, in order to get it to slice the wood’s surface, I sharpen up.

I think that it is important not to challenge natural emergent development in any area of becoming a skilled worker with substitutes for too long. The bevel side of the chisel or plane is the smaller of the two facets and so it makes sense that we grind the bevel until we reach past the fractured area along the edge. I have several reasons for promoting the flexibility in sharpening I enjoy from freehand sharpening.You see, what’s happening at the cutting edge is usually a fracturing (sometimes buckling) along the thin edge that’s so minute it can barely be seen by eye. We tend to see the edge more as wearing away as water rounds over rocks in a river or a hand smooths a well-used surface through years of use. That is not necessarily the case with edges to edge tools. Most cutting edges are fracturing, so on the larger flat face a sort of a bevel begins to occur through this edge fracture and light is reflected along this edge. We then lift up the chisel to redirect a blunter edge to the work to compensate for the fractured edge and so it’s this that should tell us that the chisel is duller than is acceptable. The fractured edge must be removed. It’s quick to do provided you don’t have to set up a guide or check the bevel angle and you are willing to develop a built-in ability by rote practice. 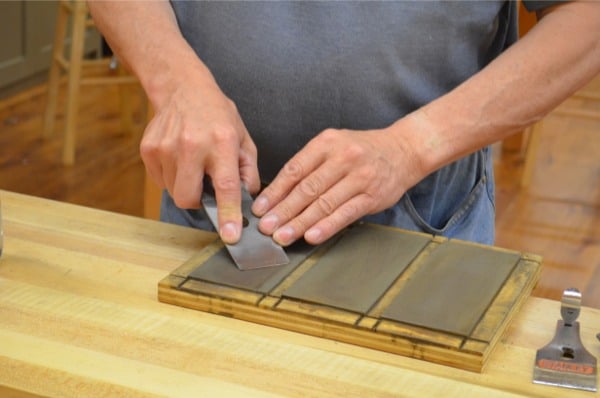 Sometimes I allow the plane to go longer without sharpening up because the plane or chisel can still produce a good and acceptable surface. I sharpen more frequently for more demanding work such as wild grain and end grain and will not risk losing ground on difficult work for the sake of sharpening up – several times in an hour for some work.

Because I have so many planes and other edge tools, I might have three planes sharpened up at the same time. One plane I will keep for only fine work and another for less fine work and so on. That way I can sharpen to task depending on the work I have planned. I usually have one plane sharpened only to 250, which is most acceptable for lots of types of work. I have another plane sharpened to 15,000 and rarely would I ever go beyond this because as soon as the wood takes two or three shavings it is already reduced to 15,000 anyway. 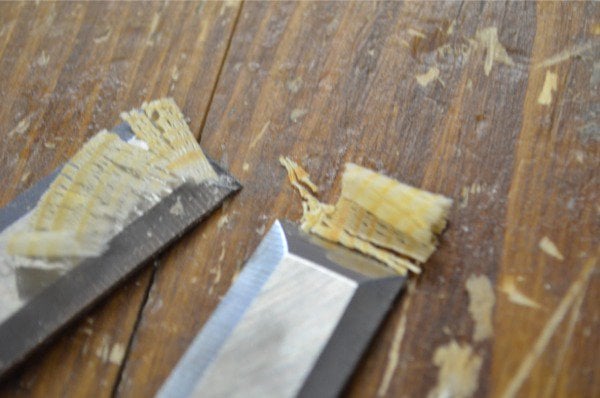 In some spheres I see that the process of sharpening has become more an extended process. For some woodworkers and especially those new to the craft there exists a search to escape confusion. The process should be as simple as it is so that we go to sharpening so automatically it seems no more effort to us than an extra couple of strokes with the plane.

Let me leave you with this question. If the chisel at left was sharpened to 250-grit, and it was, and it slices nicely across end grain pine like this, is that sharp enough?