Coping saws are so named because of their function. Fret saws because of the theirs, and of course key hole saws and table saws too. First, lets look at some differences.

Table saws are a 1 1/4” wide saw blade long and slender with a pistol-grip handle. The blade varied in length but generally, around 18″ long was fairly standard. These saws were considerably thicker along the tooth edge than the back edge and tapered from tooth edge to  back edge along the whole length of the saw. In fact the kerf was surprisingly wider than any other conventional made. Perhaps 3mm (3/32”). The back was drawn out thinner to maybe 2mm (1/16”) and less and after many years of use could be near a knife edge on the back. Table saws were made this way because they were used to cut round and oval tables, mostly in hardwoods such as oak, ash and chestnut. The wider kerf opened the passage and the tapered thinner transition from kerf to back edge allowed the saw to readily follow the curve shape without binding. Very simple. Of course bandsaws replaced these and we rarely if ever see them anywhere, even on eBay. When I was younger, as an apprentice, many of the men had a table saw and I bought my own when in my 20’s.

Keyhole saws are obvious. These saws are interchangeably called pad saws also.There are all types of jobs that need a keyhole saw to cut into and through stock without starting from an outside edge and marring the material surrounding the intended hole. Even these saws tapered from tooth to back edge on the better quality pad saw blades, which were replaceable. keyhole saw blades usually retract into the handle so you can adjust the saw blade length to suit openings and depths that might be limited by some obstruction. The older saw blades can be sharpened like any other traditional  saw blade, so they did last for several years of use. I used them a lot in my early woodworking days. Most kitchen sink insets in my day were cut with a keyhole saw. Eventually the jigsaws improved and Bosch came out with their jigsaw to beat all others.

A specialty saw of course is the fretsaw. Tiny teeth and thinness allow the saw to cut about the smallest kerfs of any saws. The saws is used for very fine work ranging from fretwork to cutting layered veneers for intarsia, inlay and other decorative work. This saw works with an underhand pull stroke with the work supported on a wooden platform held in a vise. Pulling the saw in this way means you can see the course of the cut from a above while pulling the saw to follow any guide lines. The material is almost always thin, so the blade works well on the pull. The spring tension in the steel frame keeps the blade taught. This rigidity allows the blade to travel on the up and downward stroke, but the down stroke is when the blade actually cuts. Because the fretsaw looks like the coping saw, there is an assumption that this saw cuts the same way as the fret saw – on the pull stroke. Generally, this is incorrect. In practical terms, the coping saw will give you the cleaner and more effective cuts. Let’s look at coping with the coping saw.

A cope is a method we use to shape one molded piece of wood over an adjacent corresponding mould. This always occurs where the internal corners meet. Often people think that the reason for the need for a coped interconnection is that the internal corners may not be at an exact 90-degree corner. This might help in certain situations, but the real reason is to do with shrinkage. Because the wood is fixed to the wall, all shrinkage must shrink in from the outer face toward the wall. Because of this, an internal mitre would shrink, leaving a gap at the meeting corner. A coped joint at the end of a length of wood does not shrink from the meeting surface on the adjacent piece because wood shrinks in its width and not by any noticeable amount in its length. Hence we use a coping saw to make the shaped coping we call a coped joint. We use coped joints in other areas of woodworking too, but only where we use some kind of moulding or shaped components.

It is partly because of this that the coping saw is used on the push stroke. This may seem controversial, and many people, woodworkers, defend the position that coping saws are best used on the pull stroke, but the main reason is that coping cuts are usually through thicker sections of wood such as skirting boards and not the thin stock used say in fretsaw work. Cutting on the pull stroke is more difficult to control and flipping long lengths of skirting board and supporting it for pull cuts is much more problematic too. A coping saw with the teeth facing away from the handle and toward the work means you can see the whole of the work from above. You then have all of the upper body weight and upper arm strength to work the saw very directly into the cut. The reason I say that this is the main reason though is this, working the saw teeth forward into the cut from the face means that you are pushing the teeth into a body of support or backup wood that is therefor ensuring that the prime face has no visual tear-out when done. When I was a young apprentice working with men I never once saw a coping saw with the teeth house on the pull stroke. Just because manufacturers house the teeth in the wrong way doesn’t mean that we have to follow suit. I never saw a saw maker use a saw in the every day of life yet. I likely never will.

Steps to making a coped joint 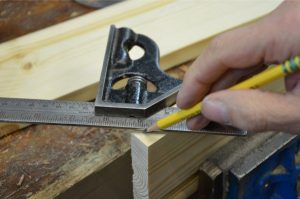 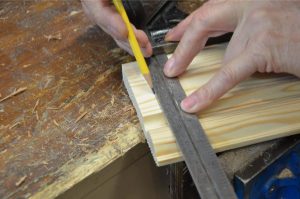 First of all you must make a near 45-degree cut. Two or three degrees either way makes little difference to the profile of a coping so you can actually eyeball if need be. Here I am using a combination square to layout for the mitre as it’s too big for a mitre box and a chopsaw. 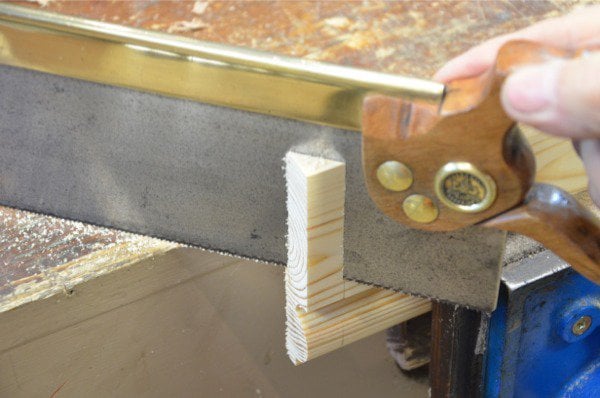 Cut down the angled line following the square line until you come to the opposite side and complete the cut as shown. You can plane the cut for clarity if needed too. 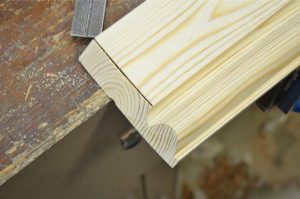 Cut along the line of the mitre to the first mould line as seen using either a tenon saw or a panel (smaller handsaw) saw. 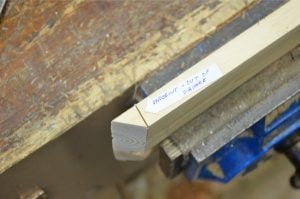 I tend to back cut the cut slightly out of square to ensure the front edge is not compromised at all. 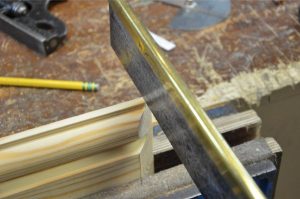 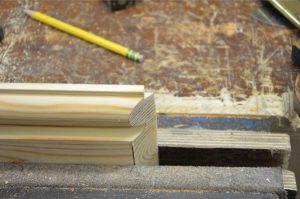 Remove the square corner at the top edge of the skirting board as there is no mould here. 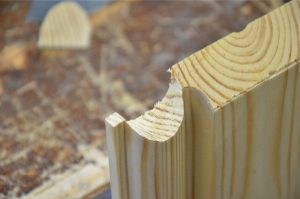 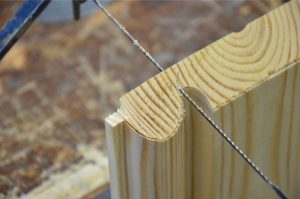 Use the coping saw to cut out the shaped cope. Follow the line carefully and undercut slightly as you did with the previous cut. 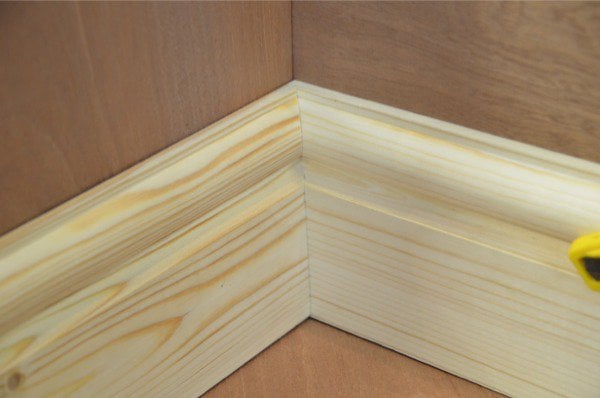 Offer the coped cut to the counter-piece and check the profile fit. Wrap sandpaper around a chisel handle to further fit if necessary or use a rasp.